The journey to create this set was, to put it mildly, a bit of an ordeal.

I am, if nothing else, a TRK guy. Like many of my TRK fellow-travelers, I love scrowns. The truth is, many of us look down our noses at large crown TRKs, mostly, I suspect, because there aren't that many playable sets available. However, the scales fell from my eyes the day I met Glenn O'Neill at his home workshop in early 2016. He showed me the beauty that lcrowns possess--hotstamps in particular--and after spending time browsing the old-school goodness and vintage fonts of 1940s and 1950s hotstamps, I have been enamored with the idea of a playable hotstamped large crown set ever since. Hell, I even mocked up a daydream cash set of large crowns, just for sh!ts and giggles, using colors and spot patterns that would evoke a 1940s-era card club. I even had a name picked out--named for my daughter born in 2016. I envisioned the hotstamps with an art deco club name on one side, classic TRK denominations on the other. Period-appropriate fonts, colors and spots. My goal was a chip that could be mistaken for one from the 1940s/1950s.

Alas, my dream was for naught, as TRK had gone the way of the dodo. Or so I thought. But then a little birdie told me in late 2017/early 2018 that CPC had acquired the lcrown and scrown molds. I reached out to David Spragg, who gave me a non-denial confirmation, but wouldn't say anything more until October 2018, when he formally announced that he had the molds. I immediately called @Johnny5 and, using some classic TRK hotstamps as inspiration, commissioned him to give wings to my very specific dream. Which he did.

But only a month or so later, my dream was dashed, as David Spragg announced that, despite herculean efforts, there was no way for the lcrowns (or scrowns) to be stamped. My dream set was not to be. By then I had a fully formed set of mock-ups, with finished artwork, spot patterns and colors.

The artwork and mock-ups made for a great screen background on my iphone, since now, according to CPC, that was the closest I'd ever come to my dream set.

The better part of a year passed. And then along comes @AK Chip, and a casual little post on PCF about buying a hotstamping machine. I PM'd him to see if he thought he could stamp lcrowns. He said he was game to try, but that it would be some months before he could do so. He was as excited about the possibility as I was, and he didn’t even really know me. Little did I know, but this was the turning point in my quest—I cannot stress this enough: without Pat's dedication, enthusiasm, and insane willingness to make this set happen, it never would have been made. Pat, you have been a true friend, though we've never met, and I am extremely grateful. You drink for free whenever I'm around.

Pat had CPC send him some lcrown blanks to try stamping, and the results, while FAR from perfect, showed a tiny bit of promise. I asked Pat for his honest assessment about whether he could stamp the lcrowns, and he said he thought maybe he could, but he was honest--it was a risk and I'd need to buy many more blanks than I needed, due to stamping problems. So, I emailed CPC and pulled the trigger in November 2019...on a maybe.

It took the better part of another year, with many unforeseen bumps in the road, but Pat (and J5) brought my dreams to reality. I cannot stress enough how hard it was for Pat to stamp these chips, and the amount of work involved. Each chip stamped, by hand, then hand-scraped, then resetting the machine and repeating. Again: without Pat's unbelievable dedication, this set could not exist. Thank you, Pat.

I also want to thank several folks who gave me sage advice and encouragement along the way: @Psypher1000 (my design guru), @AfterTheFact, @bentax1978 and @PAZ. My sincere gratitude to all of you.

My fellow degens, I present to you my 1940s-cardroom-inspired large crown set: the Vesper Clubs.

(Pictured is the bulk of the set--Pat is still working feverishly on the remaining chips.) 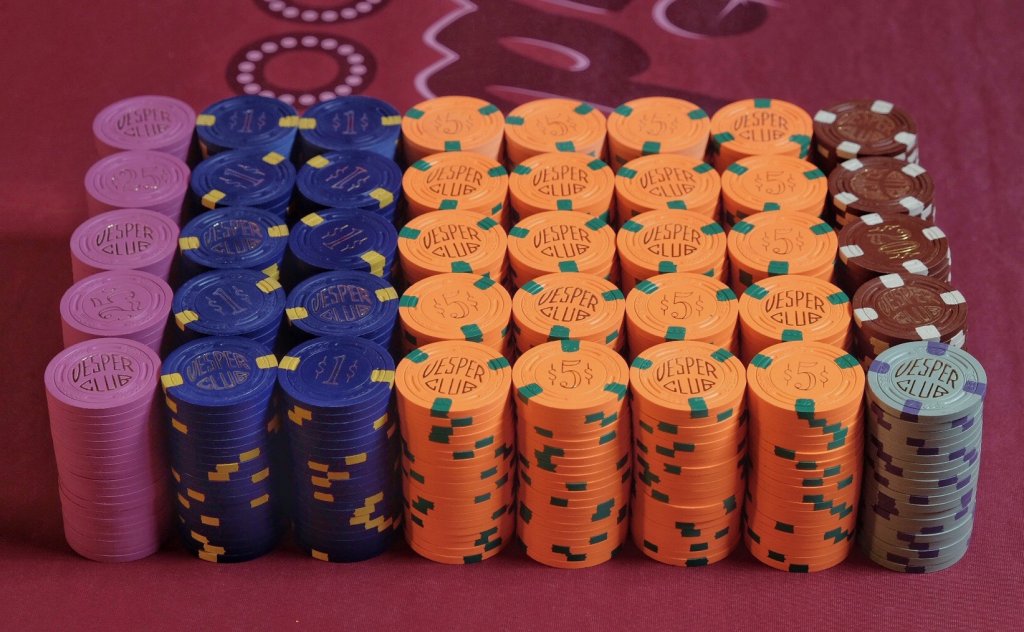 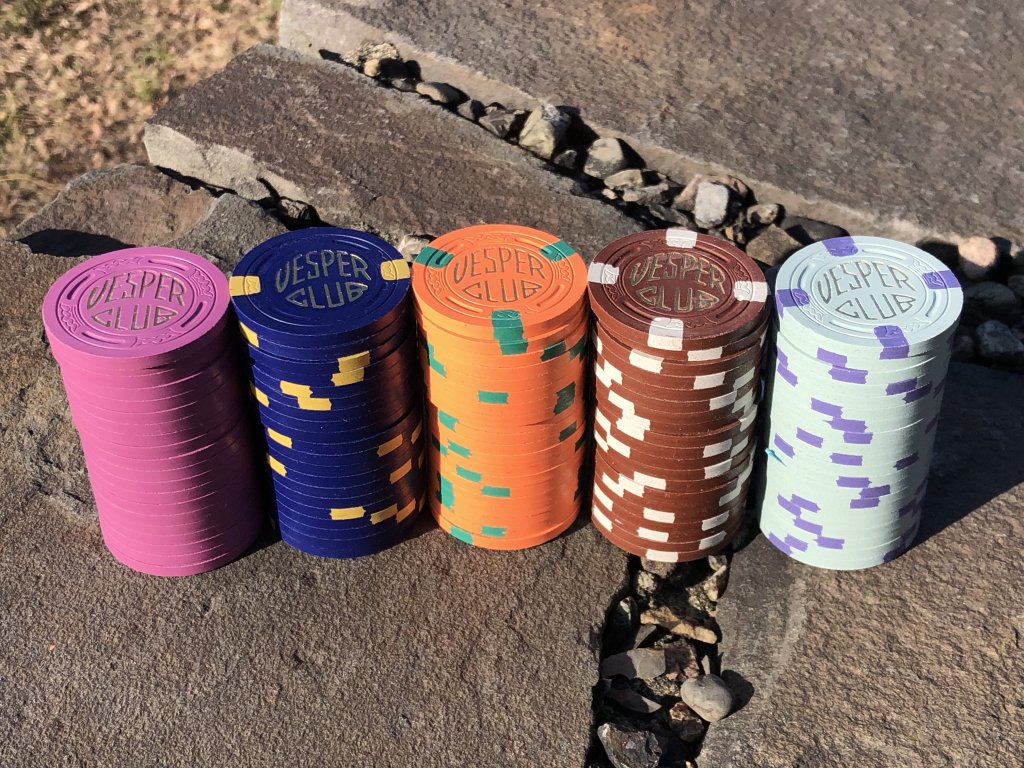 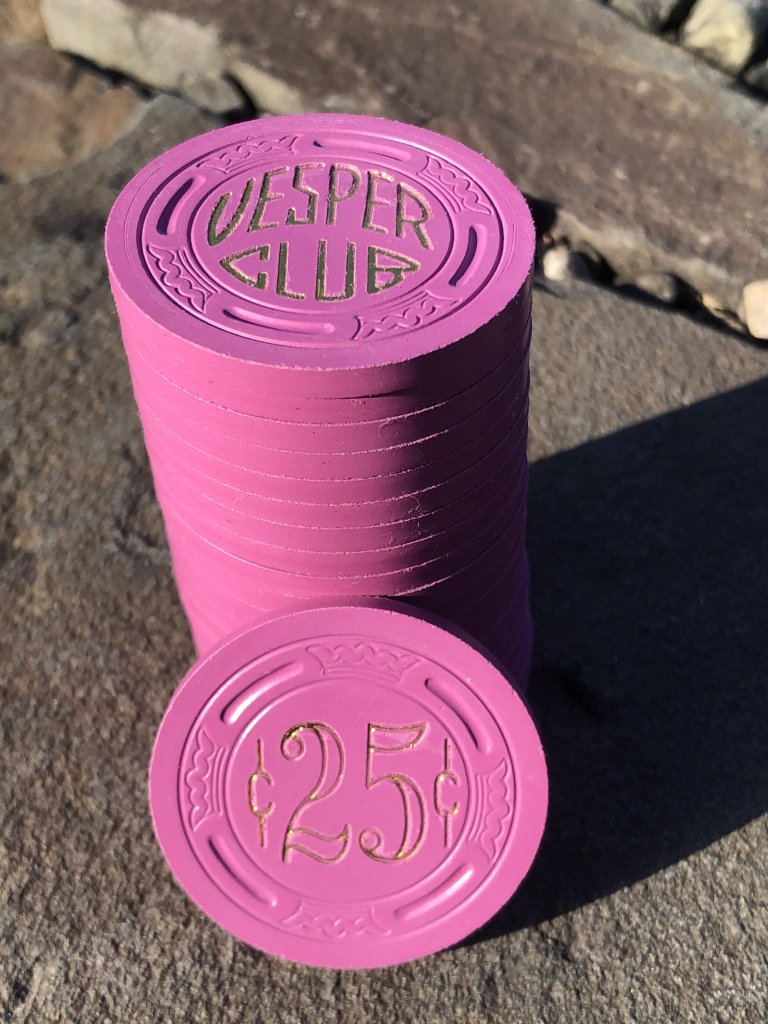 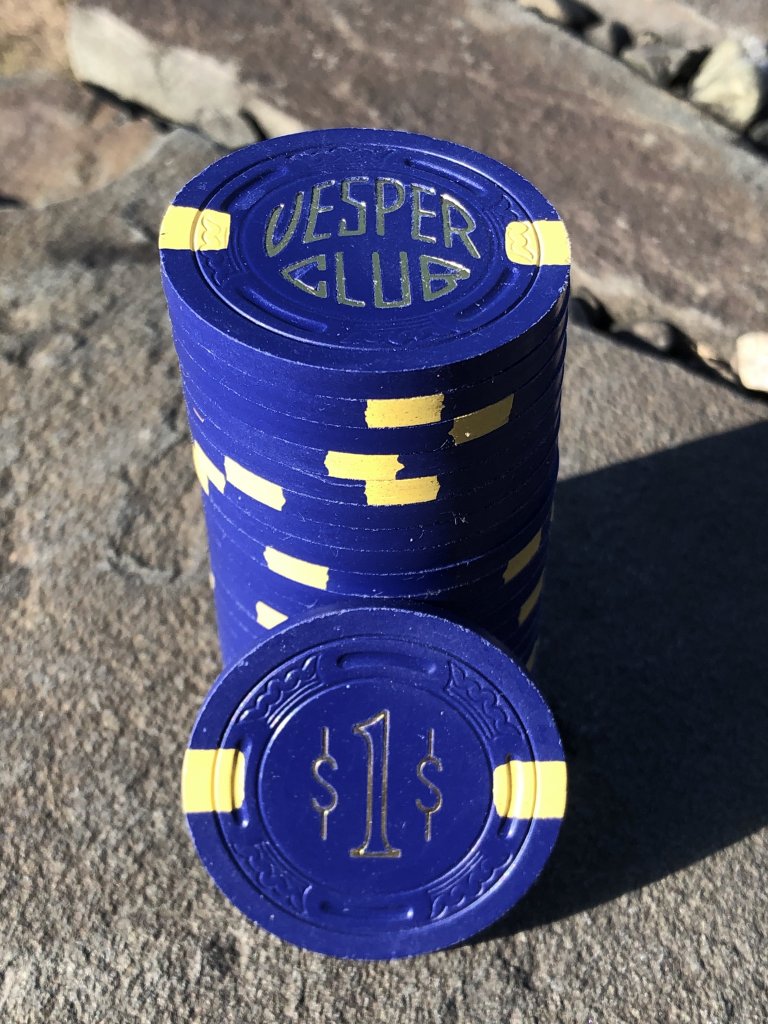 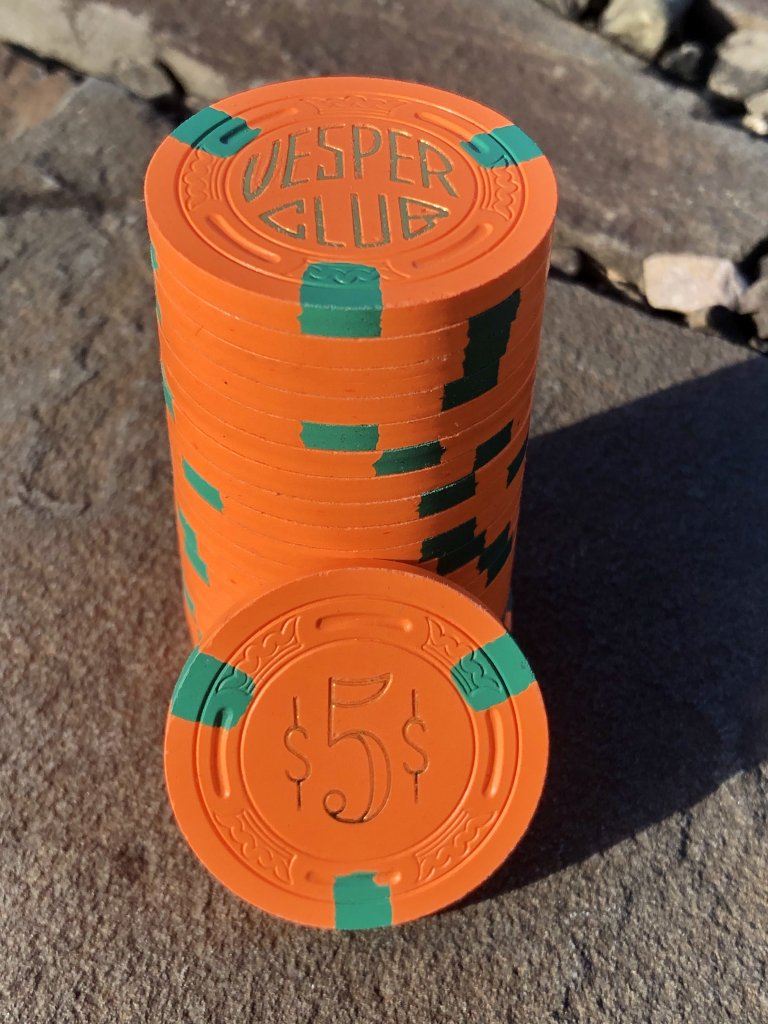 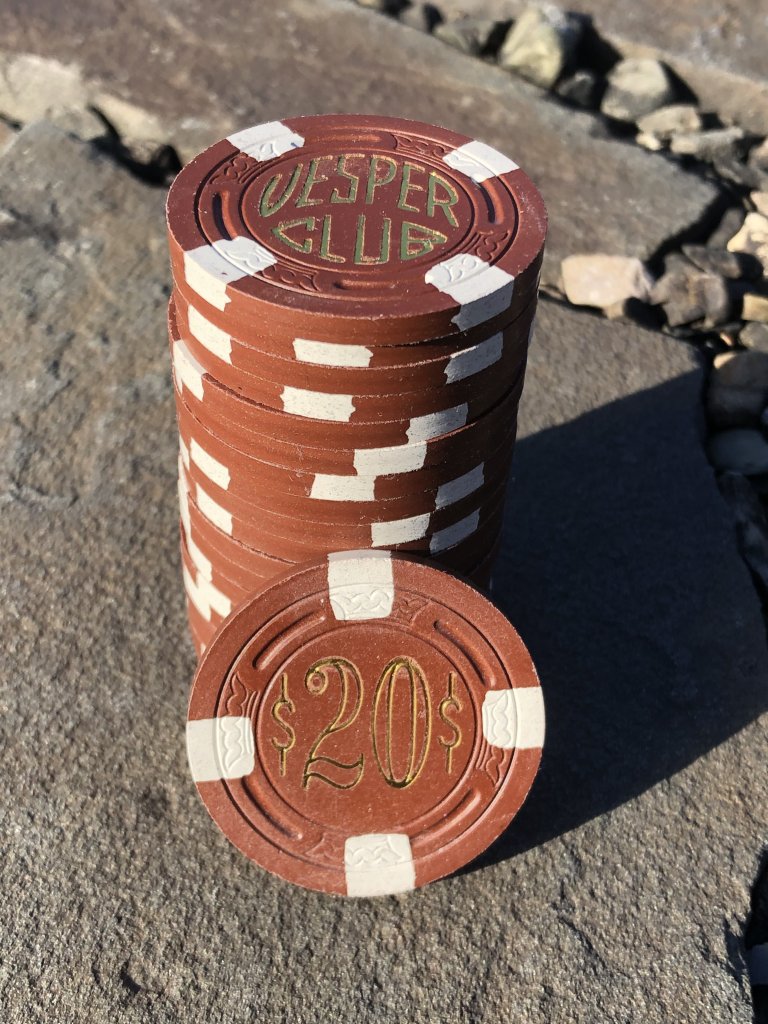 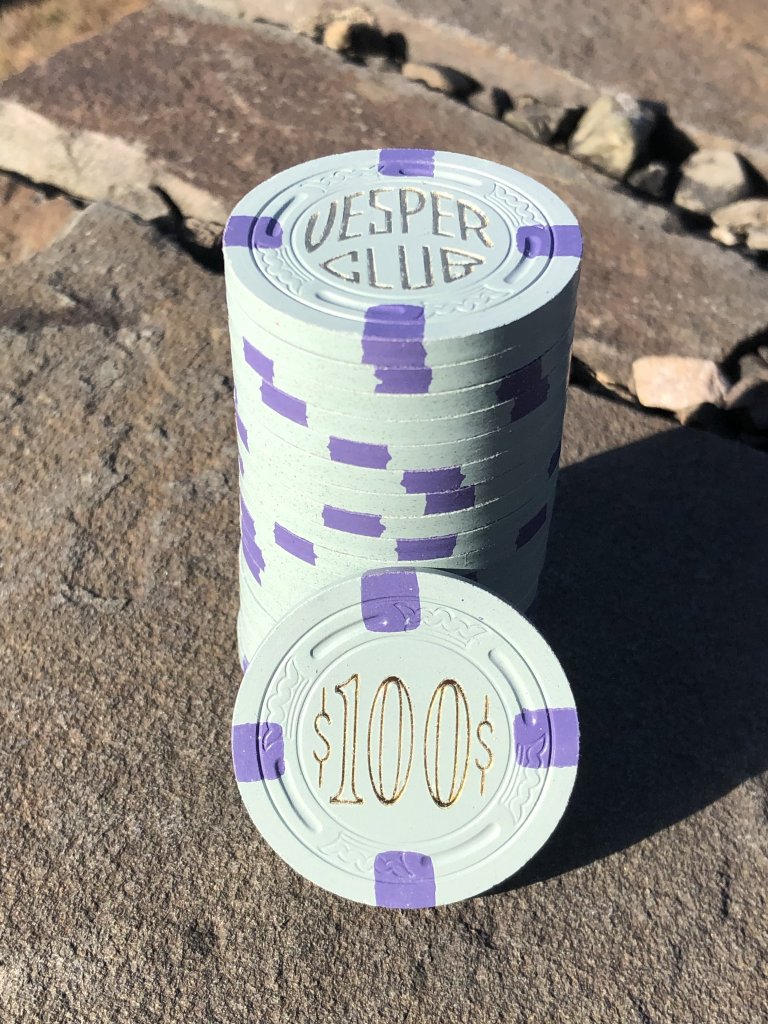 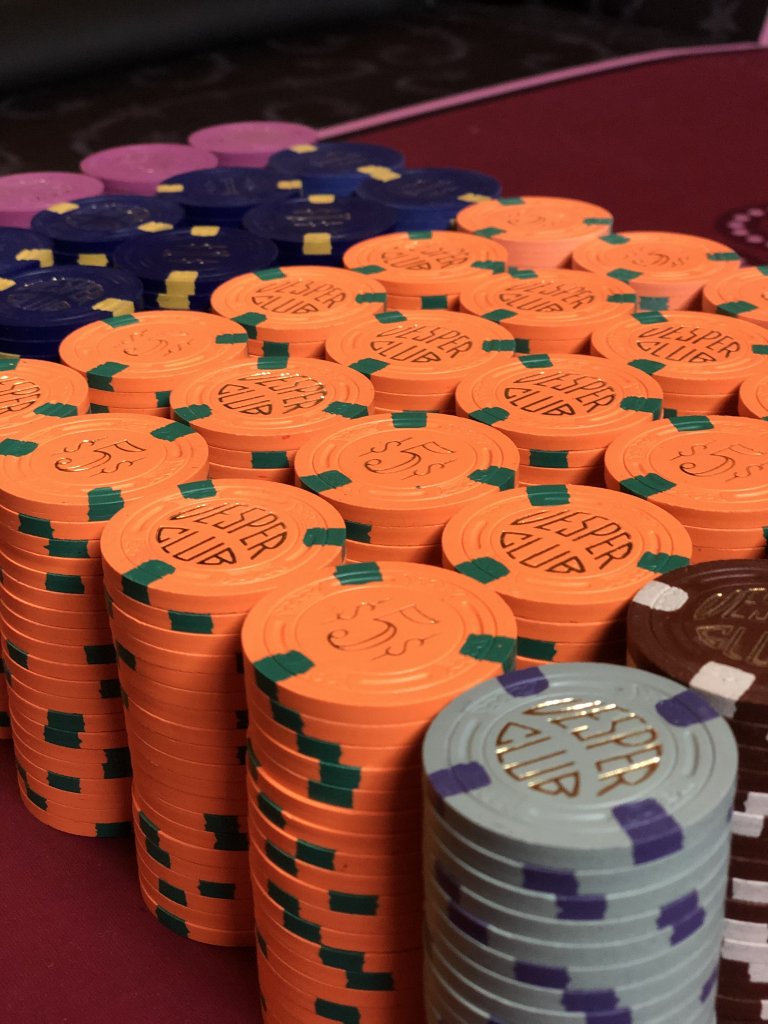 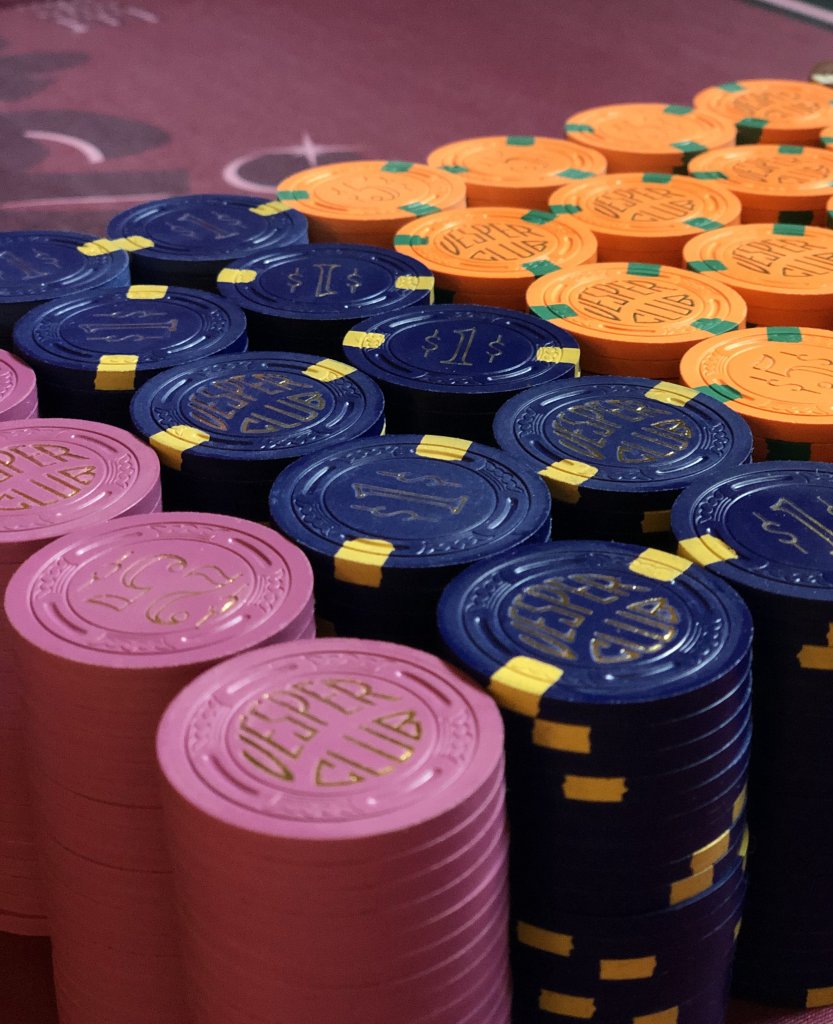 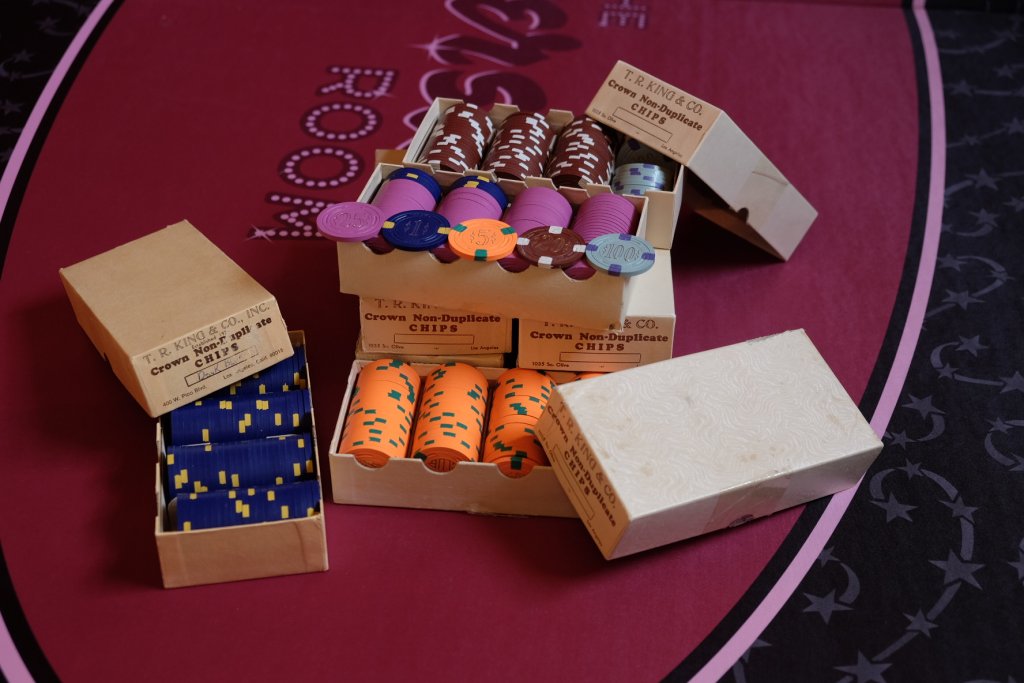 Incredible, congratulations to you and everyone involved.

Gorgeous. The only thing I’d change is ownership.

Simply Awesome! I have been waiting patiently for the big unveiling and it did not disappoint. Congrats on an epic set E.

Congrats on a very cool and unique set!

It's a fantastic set, congrats!

I love every last thing about this set! Congratulations!!

So much wow. Kudos to you and all those involved for staying committed to seeing this project to its end!
As a hotstamp lover myself, this will serve as an inspiration to working towards making my own set one day.
Thanks for sharing!

I think you just launched a side business.

Too soon to add this set to the HOF? Is this set still eligible to be entered into the 2020 vote?

I have no words.

Of course, without reading a word, I searched "Vesper" on TheChipGuide.

From someone who has always known what the Greatest Mold EVAR is.

.dibs on a sample set assuming they are offered.

mtl mile end said:
Of course, without reading a word, I searched "Vesper" on TheChipGuide.

From someone who has always known what the Greatest Mold EVAR is.
Click to expand...

I was actually tempted to submit them to the ChipGuide as a bit of a joke, but thought it might not be their flavor of humor. I posted a craigslist ad instead: https://www.pokerchipforum.com/threads/vintage-old-casino-chips-t-r-king.65450/

davislane said:
.dibs on a sample set assuming they are offered.
Click to expand...

I'm going to offer sample sets once Pat is done stamping. At this point, the failure rate was somewhat high on certain chips even with Pat's superhuman efforts, so I don't know how many "full" sample sets I will have. And there are several folks who are getting sample sets as thank yous. But I will definitely have some "seconds" which I will likely offer for the cost of shipping, I think.

No need to post dibs yet for samples--I'll start a sample set thread or something.
Last edited: Nov 24, 2020

You probably chose the wiser course of action. Otherwise surely...

Yeah, I followed the link. That's why I didn't read a word. I (thought I) knew what I was dealing with!
Last edited: Nov 24, 2020
You must log in or register to reply here.