Hey guys! I was talking to @daschuck77 today, and like always, he reminds me of the sense of community here. I've missed it, but poker, and the stuff around it, have been kind of a sore spot for the past few years. Pandemic didn't help, of course. I've developed a bit of social anxiety, which didn't help the depression that worsened after the stuff with the police.

I've been a bad friend, but he's been patient and persistent, and I'm glad he hasn't given up on me. I feel awful that he was in the game the night of all the drama and that his livelihood was jeopardized.

I guess I'll tell the short version of what ended up happening. After the raid, I hired an attorney, of course. I told him only three things were important to me, and in this order:
- Staying out of jail, obviously
- Getting my chips back
- Getting my guns back

Things I didn't care about:
- The computer, three monitors, and micro keyboard (these were in the poker room, used to run the projector and other screens for whatever we were watching)
- The soundbar and subwoofer
- The table (I could just make another one)
- The "OPEN" sign from the window (which was a joke, but something they used to make the case that I was running a business)
- The round fan I used to keep myself cool while dealing
- My work cell phone (that they tried to trick me into unlocking)
- The projector (Oh wait, they left that because they couldn't figure out how to get it down, according to the QQ)
- A few other small things that were unimportant

I knew there was NO chance of them returning the money from the game, or our vacation fund, which was hidden in an upstairs bedroom. (Had nothing to do with the game, didn't even BELONG to me, I didn't even know about it, but I guess they needed to make sure they had margarita machines and plenty of kegs and their Christmas party.). Same with the money they seized from my bank account which they drained and froze. This was the account I had my paychecks deposited into, so it's not like there was a bunch of unexplained funds. Whatever.

After multiple court dates, multiple thousands of dollars, multiple sleepless nights (ongoing), I ended pleading guilty to Class D misdemeanor gambling, which has a maximum penalty of a $500 fine. So in my early 40s, after growing up in the inner city , after being in the Navy, after maintaining a Top Secret security clearance for 20 years, I now have a criminal record. lame. (My attorney negotiated basically the same deal for the other couple who got charged with the same thing I did. They had public defenders, and weren't really looking to get any of their stuff returned.)

I did end up getting the chips back, minus some losses that may have been pocketed, or perhaps lost in an evidence room somewhere. (Literally while I was picking them up, signing the paperwork, a couple fell out of seam in a paper bag. I had to ask the lady to pick them up and give them to me. She rolled her eyes.)

I did end up getting the guns back, minus one that got "lost". (From the QQ, who overheard them working the bolt on a rifle and saying, "Damn. He got some nice shit.". You'll never guess which gun got lost... )

And thanks to some dick head, I also got the Orleans table back. (No seriously, @Richard Cranium . THANK YOU for finding that. I owe you one.) Bought it at auction for $80, IIRC, rented a truck, and picked it up from some warehouse. I didn't really care about it, it was the principle. I even considered , I don't know, burning it or something to wash away the bad spirits.

Anyway, I guess that's it for now. I hope to be welcomed back.

Glad you're back and recovering from the trauma...

Welcome back! I'm still angry that it happened, and more angry that you didn't get everything back, itemized.

Welcome back! Sorry to hear what you went through!

brains613 said:
I did end up getting the guns back, minus one that got "lost". (From the QQ, who overheard them working the bolt on a rifle and saying, "Damn. He got some nice shit.". You'll never guess which gun got lost... )


Anyway, I guess that's it for now. I hope to be welcomed back.
Click to expand...

@brains613 - they book evidence and it just gets “lost”??? Did they have to compensate you for that?

Wow! Welcome back, better days and good times ahead. The fact that you were put through the ringer like that is the crime!

Jeff said:
@brains613 - they book evidence and it just gets “lost”??? Did they have to compensate you for that?
Click to expand...

Is that a joke, mate? We're talking about the police here...

Just in case you're not joking, let's talk through it. You are assuming that it got booked into evidence. Why? We're talking about the police here. If Officer ray decide to put it in the trunk of a car, who is going to stop him? Me? Remember, I'm the dude who just had his house raided. Why would anyone believe that I'm being truthful about my missing firearm? Especially against the word of every officer on the scene. None of them recall seeing a bolt-action rifle. They DEFINITELY didn't see officer Ray take anything to the trunk of his car. So what compensation can be had here???

I'm asking this seriously. I have a scar on my face RIGHT NOW that a cop gave me when I was nine years old for "talking back" to him. He hit me with a blackjack, which, IIRC, they weren't even allowed to be be carrying. Nobody did anything. And that was long before cell phones told people that a lot of these dudes were lying about their interactions with the public.

So no, this is just a loss. No recourse. Be thankful I was compliant and they didn't feel like I needed to "escape" after they found out "there's nothing here", which MULTIPLE people heard them say after bringing their drug dog through. By then, they had realized that they screwed up, and would have been LOOKING for a reason to make this "raid" worthwhile. I made sure not to give them one. In my kitchen, one said "put his handcuffs in front, he's been cool." I said, "you can leave them." and kept my hands behind my back.

Oh, Welcome back. After going through all that, I will be glad the whole thing is finally over

For anyone who wondering who happening in the first place, you can get the rest of the story here

Sorry to hear about your ordeal and glad that it's resolved almost as well as you could hope for.

What nonsense. Sorry to hear there has been continuing fallout. Take care of yourself - have you considered therapy for digging into that anxiety you mentioned?

Welcome back. What you guys had to go through was terrible but I'm glad you're back on the forum.

Your loss is our gain, in that we all must remain vigilant on who gets invited.

It just pisses me off to no end that the seizing of your hard-earned money, the gun disappearing, the emotional trauma to you and your family, the theft of your tv and equipment are each individually bigger crimes than the class D misdemeanor. Combine it all, and it is clear the police are the real criminals in this story, and you are simply a victim.

Luv ya, P. Glad you're relatively okay after a horrible ordeal. Better days ahead!

Sorry to hear about your experience.

What you've described is just straight up tyranny. The government and their agencies trampled on your rights as a human being. It's outrageous that you now have a criminal record for engaging in a recreational activity in your own house. That's just f'ing ludicrous.

I wish there was some avenue for you to seek justice and compensation.

I hope you'll be able to find some way to come to peace and be able to move on. I'd be angry 24/7 if I were in your shoes.

We should create a special country with an emphasis on Freedom. I would move there too.

Thanks for the kind words, guys. I appreciate it.

@timinater - I'm a big advocate in therapy. I was doing it before all this, and still am. I did get my daughter signed up after all this, as she was having trouble sleeping . Said she kept hearing noises and it thought people were running up the stairs. I felt then, and still feel awful about my family being traumatized over this.

It was late December when I got my stuff back, so I took a couple of pictures. 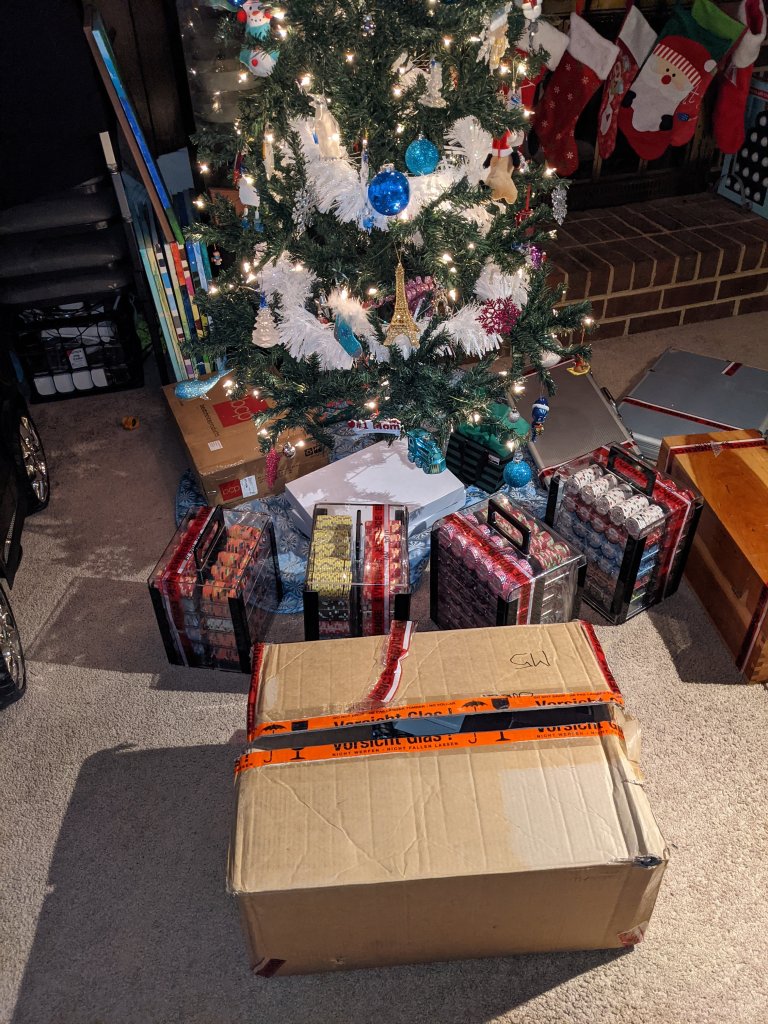 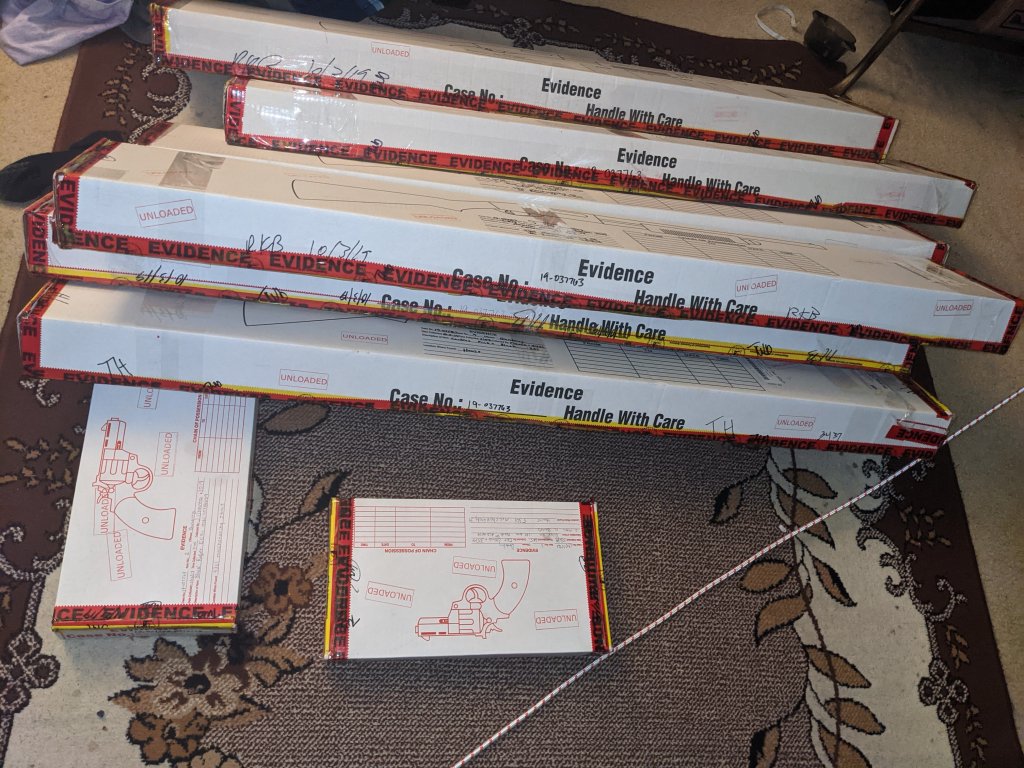 Welcome? I've been around for a LONG time. Just took a break. Not because I wanted to. Was just kind of hard to be around....

Anyway, my license plate from a few years back. 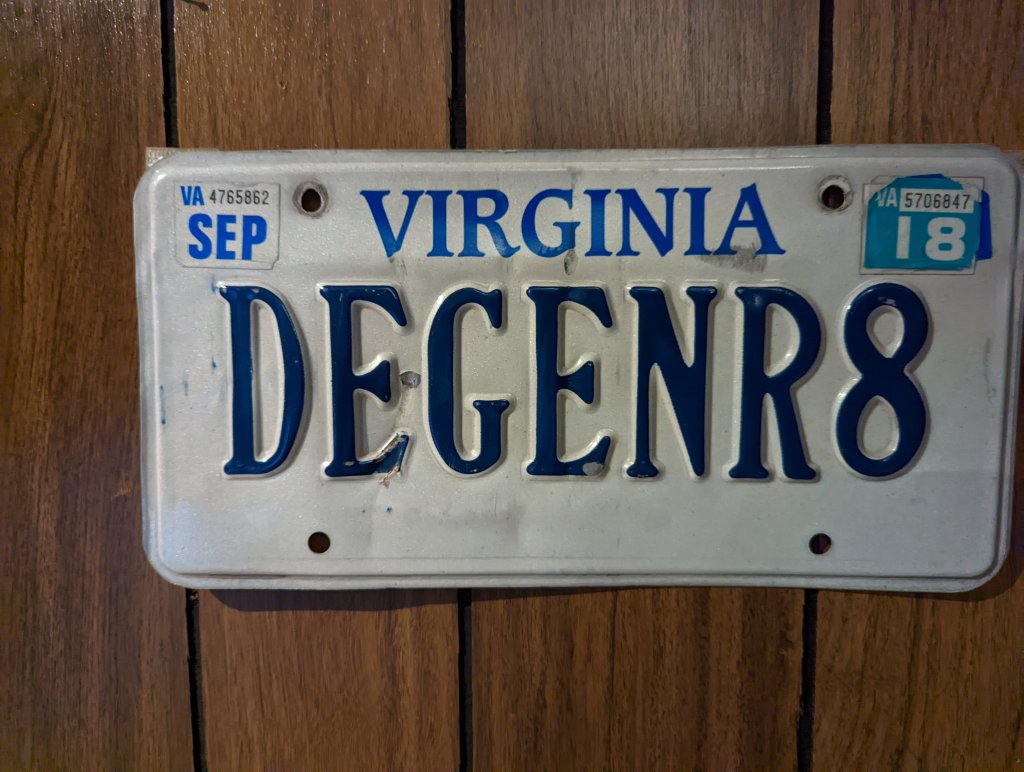 Good to see you agian

All my Best Jeff

Welcome back sir.
I'm sorry you did not get back all your ownings.

Welcome back Perry! So cool that @Richard Cranium was able to help find the table

Jeff said:
@brains613 - they book evidence and it just gets “lost”??? Did they have to compensate you for that?
Click to expand...

thats not how cops work.
G

Home games are something that's dealt like a drug bust? That's ridiculous.
I'm glad to hear you're back
E

Apparently there was a big bust here in pomona. same thing...and all the local fascists are applauding the bust, damn bootlickers.

brains613 said:
I hope to be welcomed back.
Click to expand...

Don't even doubt that...glad to have you back

B
New to PCF used to be on ChipTalk

K
New to the forum

New Home Poker Tourney Host From WA State! But I have a problem...
2