Long overdue write up on the origins of Willie's Treasure Trove, buckle up as I am long winded and tend to go on and on but I'll do my best to stay on track.

May 21st, 2017 my wife and I were married in Oregon. We were married in the gorge under Wahclella Falls. It was awesome! It was exactly the way we both envisioned it. The gorge is beautiful and the waterfalls and hiking trails are insane! We stayed in the gorge for four nights followed by four nights on the coast. The hiking on the coast was just as spectacular. We did the dunes and checked out some of the beaches as well. One of the beaches we visited was Cannon Beach where they shot portions of the Goonies. The entire trip was insane and I can't wait to go back as there is so much more we would like to do.

After we returned I knew I wanted to incorporate Oregon into my customs. I thought about doing a set that included all of the waterfalls that we visited but pictures of waterfalls never do them justice, let alone shrinking it down onto an inlay. Plus I've seen the Winner's Club Paulson's and was never really a fan. I thought about trying to tie in hiking somehow but never was able to figure it out. Then our visit to Cannon Beach hit me, and seeing that wife and I are both Goonies fans, it fit perfectly.

Jesus! Another fucking pirate set? Yeah, I did it anyway. It was a serious concern I had though, I didn't want it to feel like I was trying to copy someone else's idea. It's also tough when there are some fantastic pirate customs out there (cough @Ronoh). Another concern I had was that I didn't want to go full out Goonies. I wanted people to be able to appreciate the design even if they haven't seen the movie and that is how I decided on Willie's Treasure Trove. It wouldn't have worked with another character. One Eyed Willie fit perfectly. Those that have seen and are familiar with the movie might not even put it all together at first, but once they recognize the location (Astoria OR), "Never say die" (yeah yeah I know it's actually "Goonies never say die"), and figure out that it's One Eyed Willie, then they usually figure it out.

Now what about edge spots and colors? I've come a long way. I struggled at first. I will have to dig up some of my early mock ups (lost most of them recently after I broke my phone). When I started it was a Cali colored set with a bunch of D18 spots. I liked it but was never wowed. Now I wouldn't consider myself a stoner but I do eat edibles to help me sleep. Once they kick in I thoroughly enjoy using the chip generator. One night I was on there and threw together a monochromatic theme and it basically stuck. It seemed like I spent months on the D18 design only to toss it out for something that I threw together in a few hours. It was a crazy swing but I love how it turned out and wouldn't change a thing.

Another thing I'd like to mention is the time that I have sunk into this endeavor. I've been working on these for over three years and I'm not even done! Why three years? Partially because I enjoy the design process, small tweaks here and there, staring at mock ups and slight variations (okay maybe I am a stoner), I dunno, I just enjoyed it and taking my time. As of right now only the first three denoms have been produced. I could have just done a smaller set and had all six denoms produced at once and then added on down the road but I was concerned with color variation and am in no real hurry. The next denoms may or may not be on order, I will neither confirm nor deny.

Almost forgot to mention mold choice. I originally started with the A mold. I like it, classic mold, the A on the mold itself could tie in with Astoria (not really, the font is wrong but that's what I was telling myself), but since I was taking my sweet ass time the scrown mold was reintroduced. Well my wallet hated it but there was no other mold that fit the theme better.

Overall I am very pleased with how these have turned out and can't wait to add a few more denoms. A special thanks to @Johnny5 . The dude is awesome to work with. I'm slow as fuck and he accommodated my schedule perfectly. Thanks to @David Spragg for producing these chips as they are something special that I will be proud of for years to come. Also thanks to those that I have bounced ideas off of, you know who you are.

Mock up after working with J5: 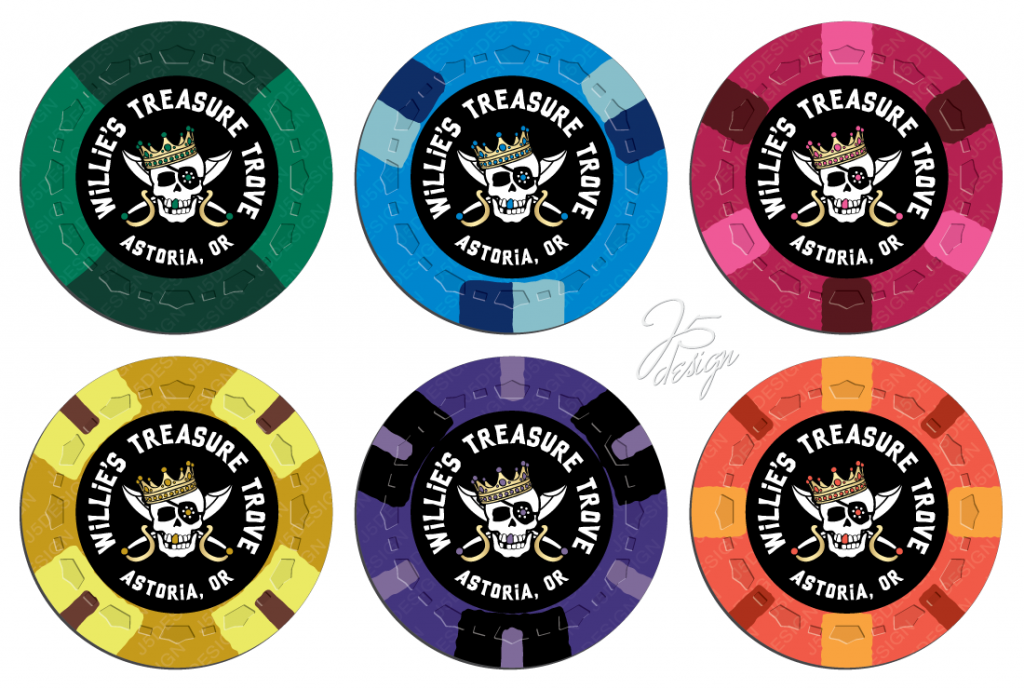 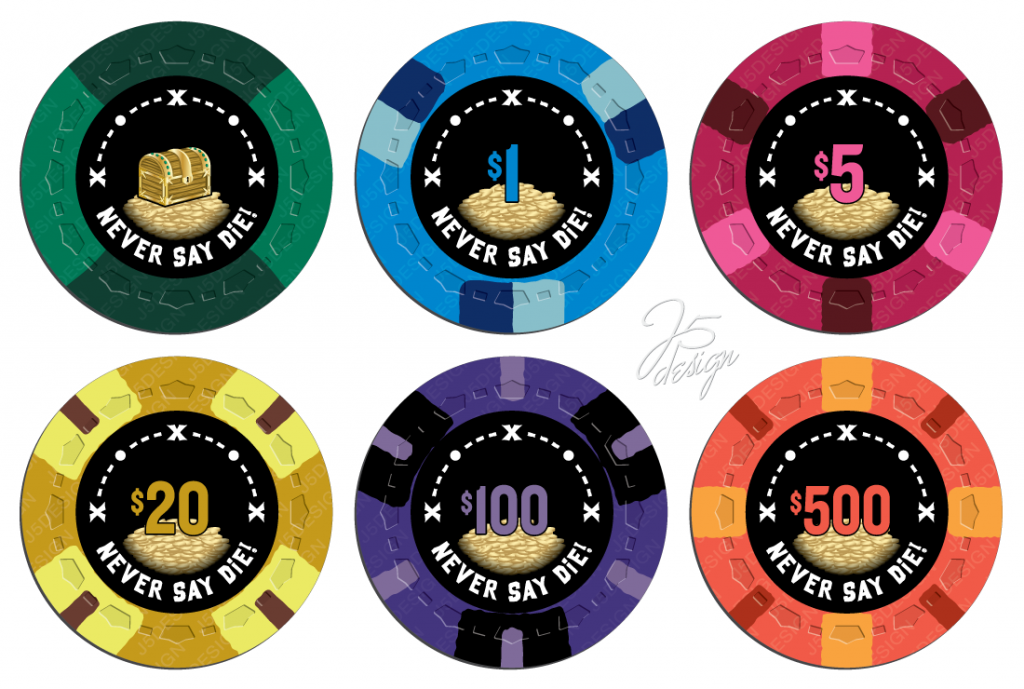 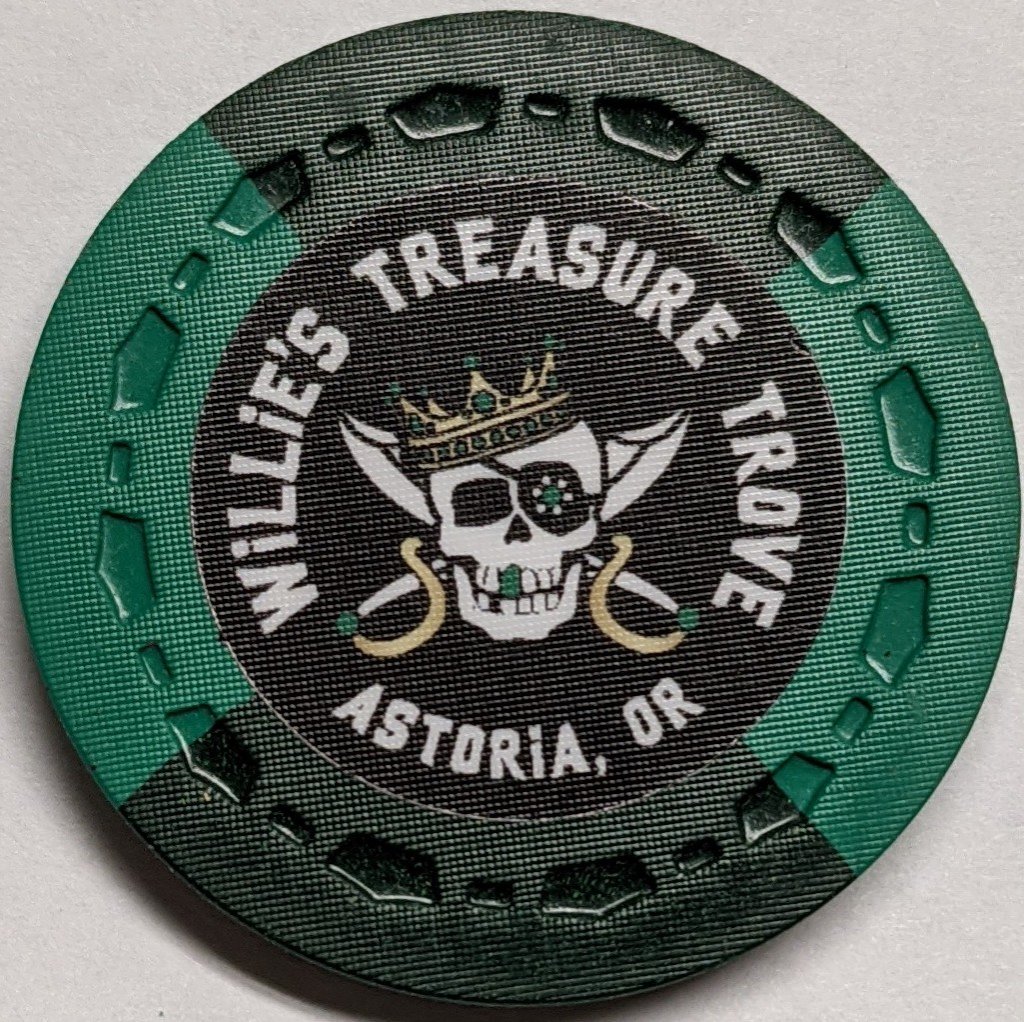 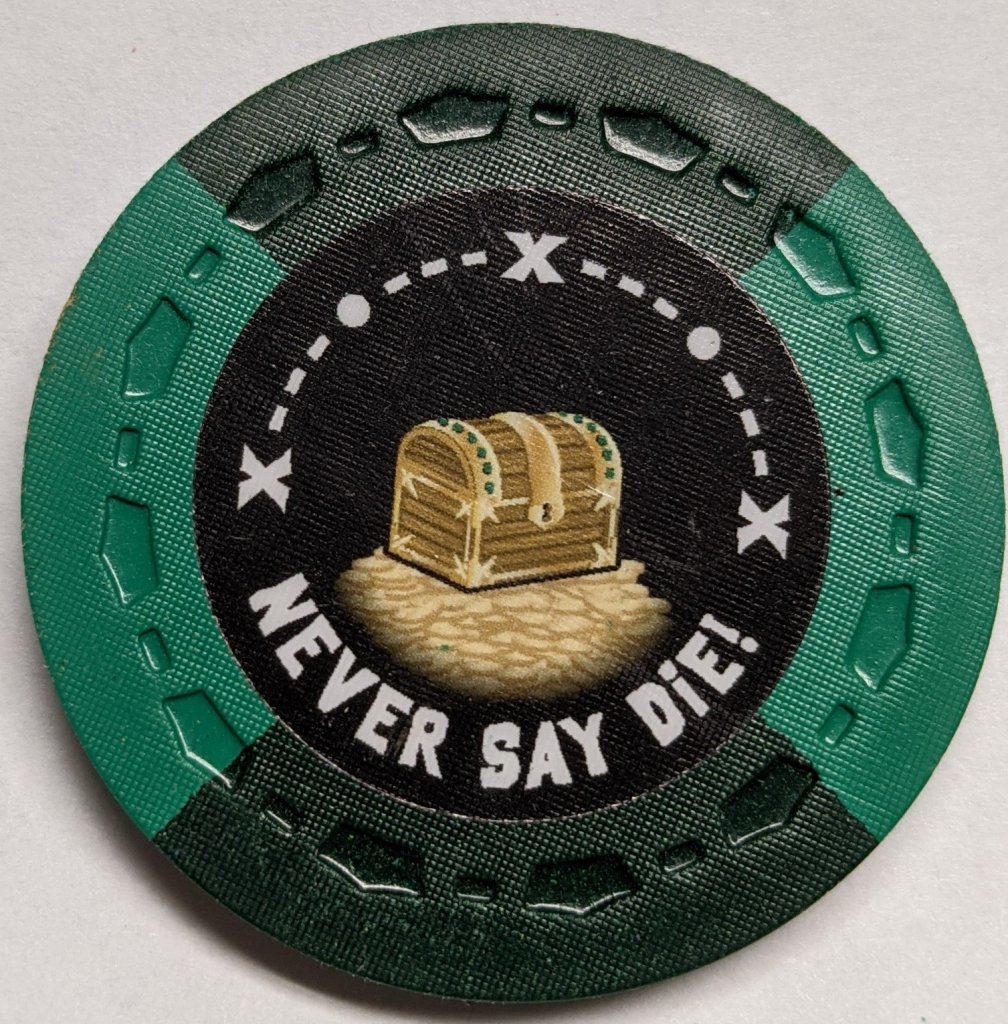 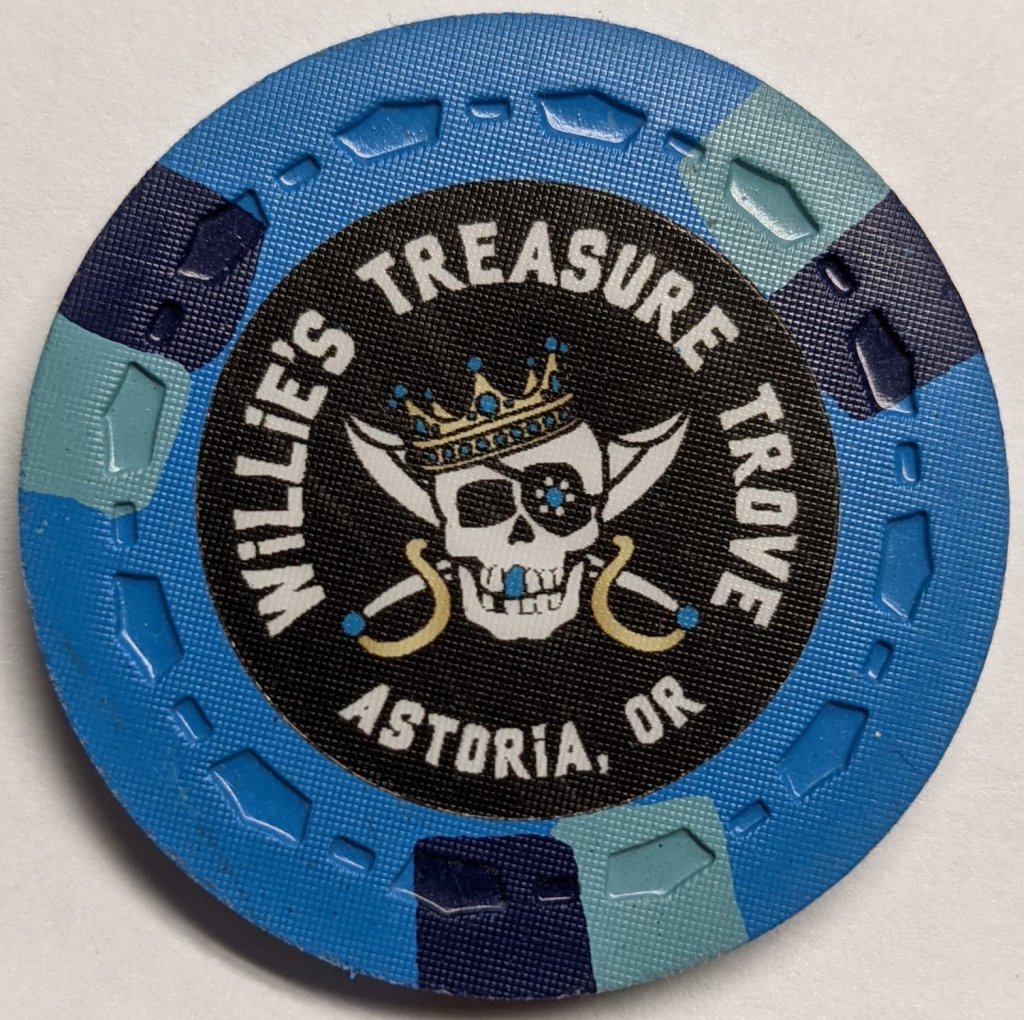 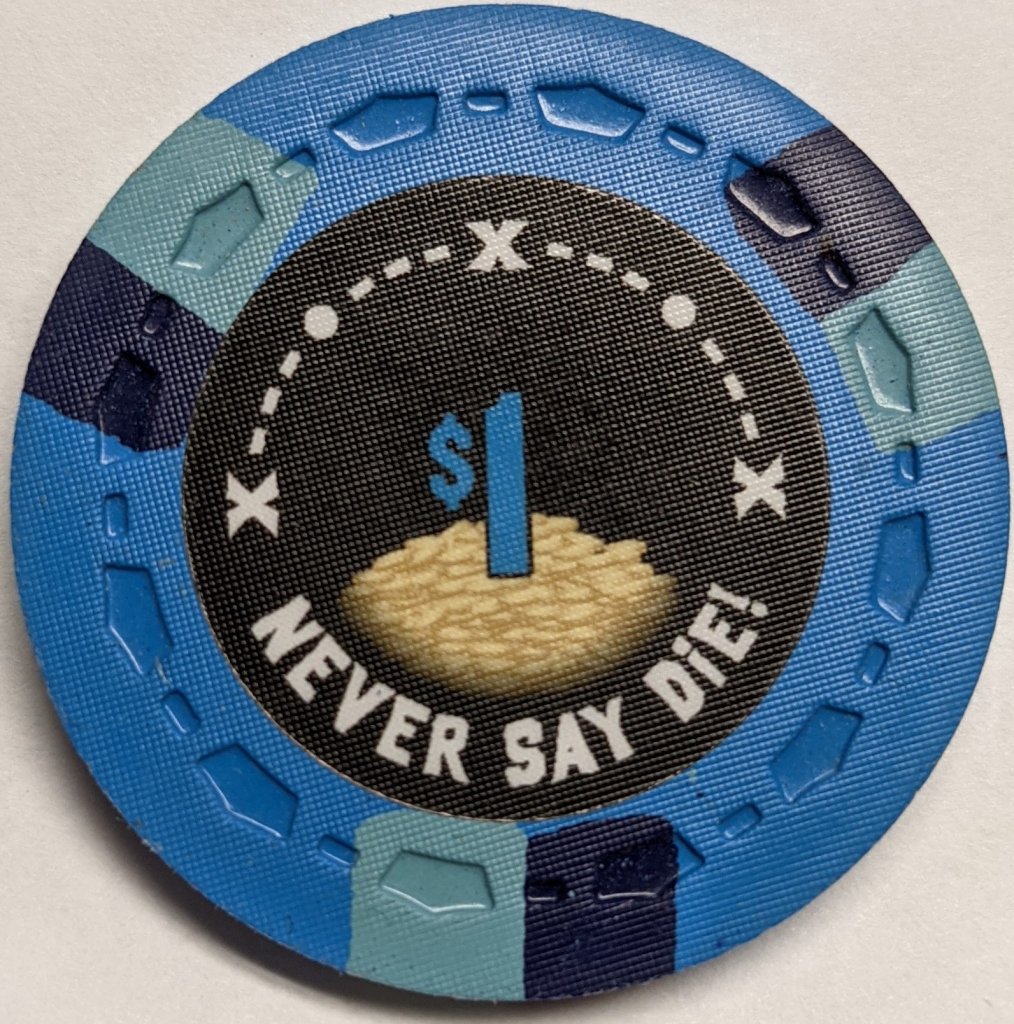 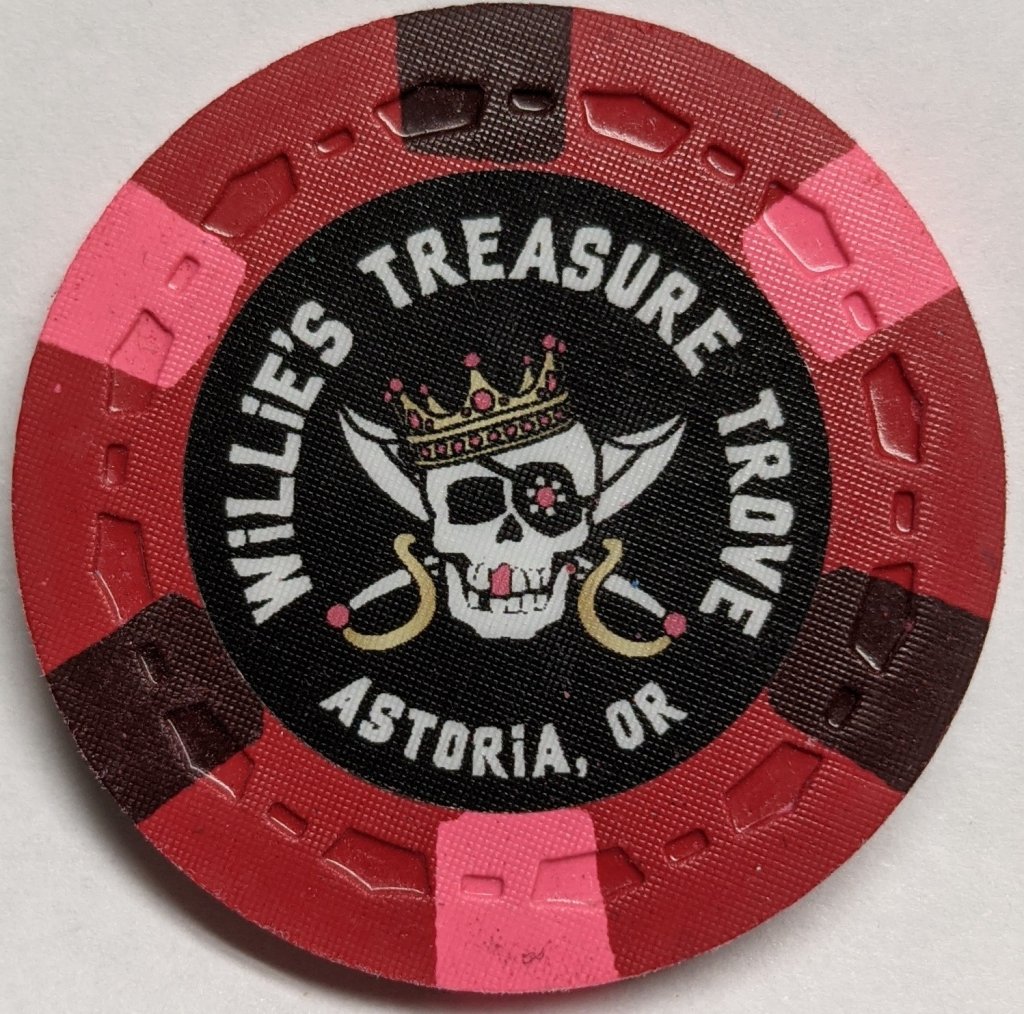 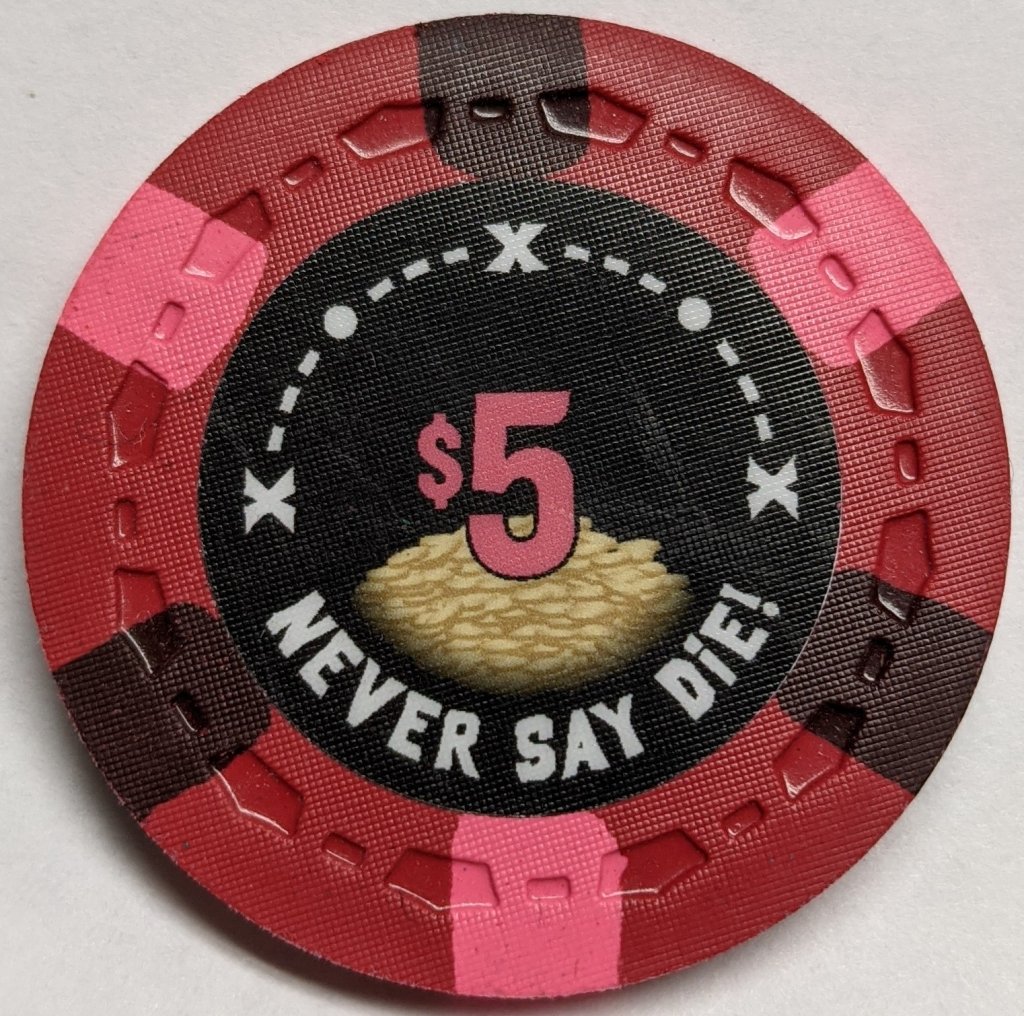 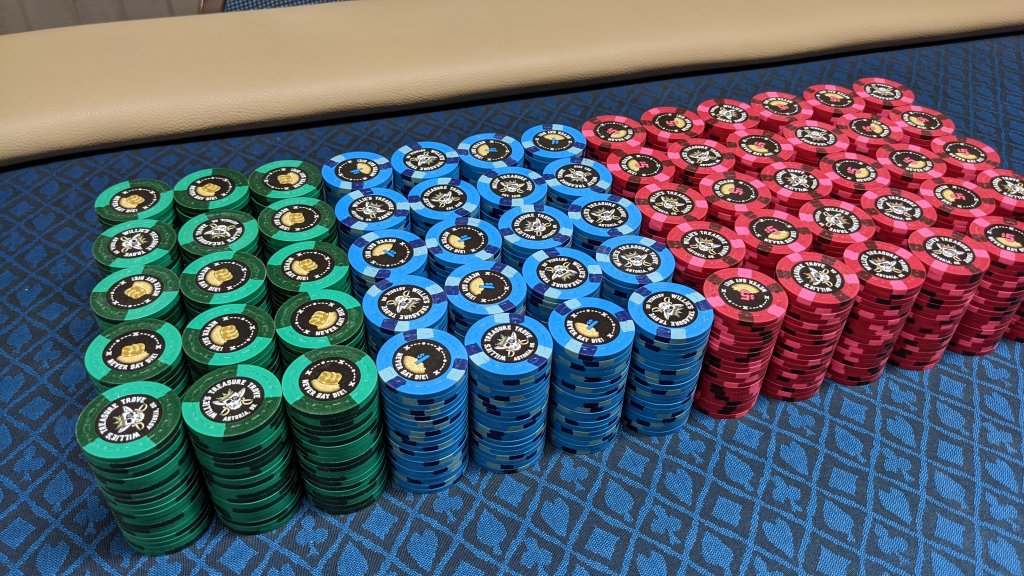 @Sprouty hitting me with the story behind the great Willies Treasure Trove like...

Thanks for sharing the backstory on these, they turned out fantastic - love the 2 inlay design! J5 is a dream to work with, and I can certainly relate to time involvement in the design process! All denoms are awesome, but the $5 is my personal favourite here. Congrats on a great set.

these chips man, well done and great back story! Put me down for a sample set if they ever become available. Side story I visited Portland for a week on a Conference, and took a road trip to the coast, saw Cannon beach (beautiful). Then headed for Astoria where I had the best fish n chips! Small old boat they had parked on land and converted to a mini fish n chips stand. Right across from a maritime museum.

I am lucky to be one of the few who have actually played a night of poker with this stoner and his chips! I like all of them but the $5 and the pink spots blows me away. I have never and may never see Goonies but I still love the chips! Taking your time is key on projects like this imo, I should learn from you!

Sprouty said:
the font is wrong
Click to expand...

Correct. A-mold is not done with the South Park font.

WedgeRock said:
Correct. A-mold is not done with the South Park font.
Click to expand...

Sometimes I can't even figure out how we are friends.

Sprouty said:
Sometimes I can't even figure out how we are friends.
Click to expand...

These are absolutely gorgeous. Well done!

Wonderfully designed! I have been a Goonies fan since it came out, and LOVE your chips.

+1 for being a big fan of these, can't wait to see the rest when they are finally made. Particularly the $500 and the purple $100, which I think is a cool idea.
You must log in or register to reply here.

Final Artwork from CPC for my Royal Mauian Custom Set