SteveHNo96 said:
The site doesn't work properly. I tried to click to add a sample set and it won't put it in the cart. What am I doing wrong? I also was going to buy a $2 chip to no avail. (I might as well add a 1 and a 2 at this rate)
Click to expand...

PM Dennis here. Easy peasy to go through orders with him via PM here.

Thank you for posting. This appears to be an issue with the web hosting company. I've emailed them asking for a fix ASAP.

In the meantime, you can always PM me here and order whatever you'd like. Just send your name, a PayPal or email address and shipping address, and a list of exactly what you'd like to order.

To use PayPal -- send your PayPal address and I can send an invoice directly to your PayPal account that you can pay with a click.

To pay with a credit card -- send your email address. I'll email you a link to a Square invoice for secure credit card processing.

Thank you again. I hope to have the site cart up and running later today.

Here's a "heads-up" to the folks following this thread.

In April, we'll play some live roulette at the Key West. After getting things set up, I will open a separate thread titled, "Key West April Contest: Let's play some roulette!" You post in that thread to enter. I'll put a link here when the contest opens.

The rules are simple:


When we get 37 entries, numbered 2 through 38, we'll close entries for that spin.

The wheel will spin on the Saturday evening after we have 37 entries. We'll stream the spin live.

Wherever the ball lands, the member with that post number wins $35 cash. Someone here will definitely win.
Last edited: Apr 4, 2020

Can you holler at that girl in the dress for me?

Changes to the Key West site:

1. We'll have some videos on the site in the next couple of weeks. Look for videos of chips, playing cards and our other products.

2. The Key West website no longer uses "buy it now" buttons or a shopping cart.

Most of our business comes from our friends here on Poker Chip Forum. (Thank you!)

Several weeks ago, the Key West site's web host (Weebly) stopped supplying shipping information from our site to PayPal. PayPal stopped adding shipping charges, and orders started showing up marked "paid," but without the necessary shipping. (Weebly wants to charge a fee to connect to a third-party shipping service, which we'd also have to pay for. Based on the number of orders that come from the site, that would be about an increase of about $10 per order.)

For some time before this, PayPal was messing up the shipping charges anyway, overcharging customers. I had to refund the difference and pay extra fees for the refunds.

To fix this, all the "buy it now" buttons are gone from the Key West site. They were removed by July 21.

If you must use the site, there's a blue "order form" button on each page. Click it, complete the order, and hit "Submit," and we'll send you an invoice.

(There's even a spot to note your screen name here on PCF!)

Good to see you back on here, Dennis

Did you ever get your new chip shipment in?

Keep up the good work!

JMC9389 said:
Did you ever get your new chip shipment in?
Click to expand...

Jerry at Jetacer, who created the free online casino games for the Key West site (blackjack, roulette and a slot machine) will be working on new versions of the games in the coming months. Our current games are in Flash, and Adobe will stop supporting Flash on Dec. 31.

I'm hoping we'll be able to play the new versions on our phones.

Look for a contest link to go up at noon EDT Monday. The first 37 posts, numbered 2 through 38, are in the contest, which is free to enter.

You can watch the spin live on our Facebook page. The winner will be notified here by PM and paid via PayPal.

I've always wanted to do a slot tournament using our online slot machine.

I'm thinking we could open a tournament to groups of nine players. Hold it on a Sunday afternoon. Have them all open the slot machine on their laptop of desktop, meet on Skype and share your screen. High score at the end of the round advances.

Winners in each round of nine would meet later for a "final" round for some cash prize.

chutracheese said:
How do we enter @dennis63.

Yes. There will be a specific contest thread posted on PCF at noon EDT Monday. Just post "in" (or anything you like) but post only once.

Just announcing it today so everyone who'd like to get in on it will know when to look for the contest thread. (It usually fills up and closes in 30 to 40 minutes.)

We're awaiting the arrival this week of a new "Big Six" Wheel.

I plan to add the wheel to the Key West's inventory of live gaming tables and put it into play at our casino fun nights when the pandemic is behind us.

In the meantime, I'd like to use it to give away some cash this month. Post once in the giveaway thread for a chance to be a player at the wheel. The contest is simple enough: If you're picked, you get a spin and win the amount on which the wheel stops.

Here's a link to the giveaway:

The new Big Six wheel has arrived. The stand is 6 feet tall, and the wheel is 3 feet in diameter. Nice quality, and heavier than I thought it would be. It sits on a stand similar to an umbrella base. The currency images actually look real, but are about two-thirds size. We'll need to make a layout for it, which will be easy enough, and probably a small riser to keep the bottom of the wheel higher than the layout. 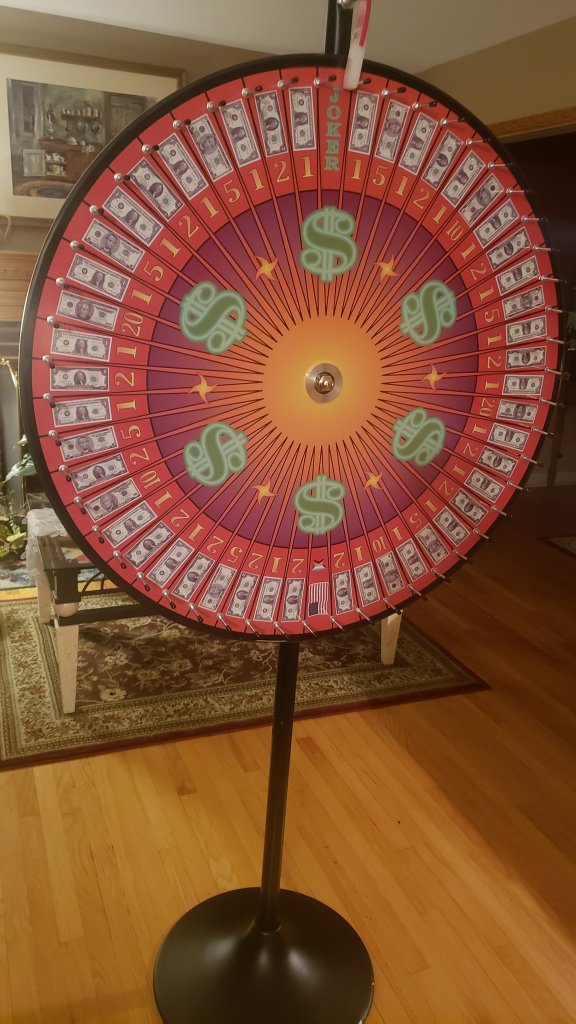 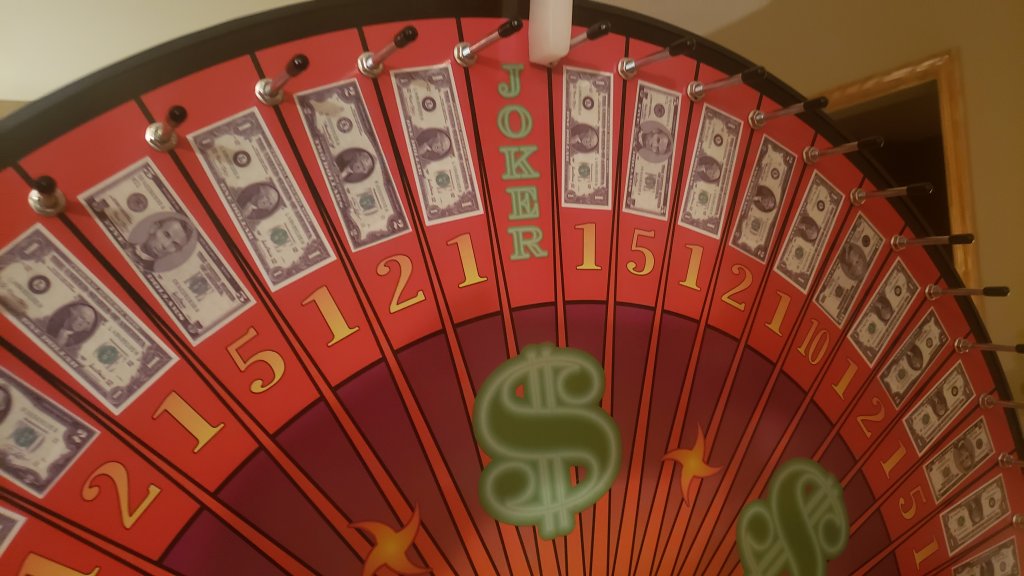 Jerry at Jetacer Inc., emailed yesterday to let me know work has begun on updating the interactive online casino games on the Key West's site. They run on Flash, which Adobe will stop supporting on Dec. 31.

He's remaking the games in a new program. I'm looking forward to seeing the new versions.

I have a family obligation Saturday morning, so we'll pick players for the contest on Friday evening at 8 p.m. Players will be notified by PM here.

I still plan to spin the Key West's Big 6 Wheel on Saturday at 3 p.m. EDT. You can watch the spin live on FB, but you don't need to be watching to win. Whatever the wheel lands on, the player wins.

If you haven't posted in the contest thread (once only, please) for your chance to win, here's the link:

And speaking of the Big Six Wheel...

We're now listing the wheels for sale on the Key West site. (Photos in Post # 104). PM me here if you're interested, as members here get a better price than retail.
Last edited: Oct 27, 2020

Location
Out in the West Coast...

Why Flash? Why not HTML5?

SteveHNo96 said:
Why Flash? Why not HTML5?
Click to expand...

He's moving away from Flash.

Davism72 said:
He's moving away from Flash.
Click to expand...

At the time the games were developed, Jetacer was making games in Flash. At that time, Flash was running lots of games everywhere, everyone was okay with it, and finding a game developer who would make a new, custom game was not easy.

I wish we did the games originally in HTLML5. It would have saved at least a couple of thousand dollars.
Last edited: Oct 28, 2020

On Sunday, 11/15/20, I announced that our blue $1 chips will remain available, but will no longer be offered for $1. You can always redeem your blue $1 for $1, both now and in the future. (There is no need to turn them in if you prefer to keep them, and you an always cash them in for $1. )

Here's the link to that announcement:

This move was planned from the start. My original plan was to issue 5,000 x $1 blue chips for face value, then end the offering. The $1 chips for $1 was designed for people building larger sets of chips that included 100 or 200 x $1 blue, to reduce their cost and get them fired up to buy the set they wanted.

The cost of making a blue $1 chip

The chips are Classic Poker Chips, inlaid H mold chips with Level 1 spots. Until recently, they cost $1.95 each to have made. Shipping cost about 5 cents per chip. We also took a loss on PayPal fees instead of passing that to the buyers, and PayPal charged fees on both the cost of the chips and shipping. That's about another 6 cents per chip. International fees were larger. My guess is that each blue $1 chip cost us around $2.06 by the time it reached a player's home table.

How we tried to make up the loss:

When a member paid one dollar for a $1 blue chip, we invested the $1 into a peer-to-peer loan business called The Lending Club. Investors bought small $25 notes representing a loan of $25 to someone, and many investors would join together to make loans of thousands of dollars, each putting in their $25 to share and minimize their risk.

This worked well for awhile. Early on, The Lending Club had notes paying 12 percent, so we were effectively earning 1 cent per month for every blue $1 chip issued. Later, notes dropped to around 5 percent.

Now, the Lending Club is closing its peer-to-peer lending and becoming a regular bank. Other P2P groups are doing the same, and the industry is considered dead. With banks offering historically low interest on things like CDs and "high-yield" accounts, there's really no way to make any measurable interest on the cash from our chips and have it be liquid enough to access if we need to pay it out for chips that get cashed in. (None have as yet.)

At the same time, the cost of having the chips made for us is increasing, climbing father and farther above the $1 face value. We began offering a $2 chip when production cost was below $2, hoping those would catch on, too, allowing us to continue to gain revenue from live chips. When Classic's per-chip cost for Level 1 spotted H molds went above $2, it made low-denomination live chips a moot point.
You must log in or register to reply here.