Can someone do a flashcard style rules for, "brag" (not the casino, 3-card poker version). (1 Viewer)

I found the games' flashcards on the resources section of this website and I'm fascinated by all the games I didn't even know existed.
I was trying to remember how to play, brag, The U.K, game, but all the rules I find online explain the 3-card, casino version.
Isn't it possible to play brag and have the dealer rotate in a home game?

Can someone do the rules flashcard style? 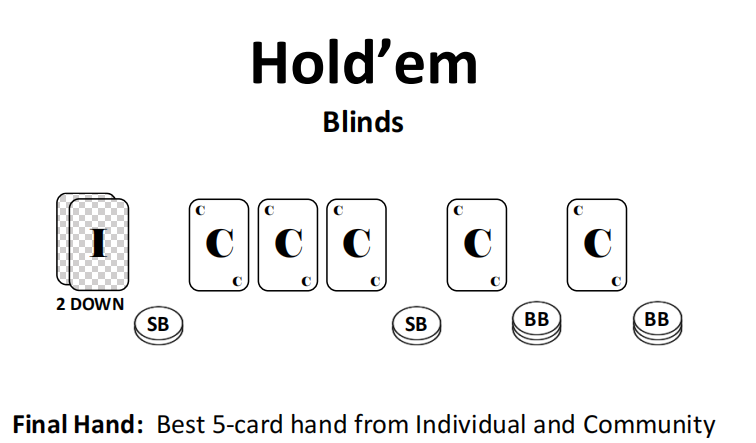 Brag isn't suited for a flashcard like that (i.e. the ones from Abby's mixed game cards) because it has a completely different betting structure than Poker does.

That said, I can describe the rules in short form such that they can fit on a card. In fact, I've made such cards for all my card games, and here's what's on my Brag card (it takes up two sides of a 3x5 index card):

Not Poker. A poker-like game with three-card hands and a single round of betting with an unusual betting procedure. Players can bet without seeing their cards (“blind”).

Players must bet at least as much as the previous player’s bet, or fold. Blind bets count double. Betting continues until only two players are left and one bets double to see the other’s cards, or only one player is left.

The player seen shows first and wins ties. You cannot see a blind man. Blind players can look at their cards just prior to betting; they are then no longer blind (“open”).

Blind players cannot win if everyone folds: instead, the pot stays for the next hand. They keep their hand and are dealt a second hand and can look at either and choose one to keep, or look at neither and keep both.

Folded hands are put on the bottom of the deck. The deck is not shuffled between deals unless the previous hand was won by a prial.


The above is only a bare-bones summary of the rules, meant to fit on a card as a reminder in case you forget some of the fiddly details. You probably can't understand how to play just by reading this card, though, because Brag gameplay is extremely unintuitive to a poker player because the betting procedure is very, very different and will seem completely wrong to a poker player. But it still works, and Brag is a good game. And while it's different from poker in several key ways, it is in fact one of the ancestors of poker.

As you've discovered, there's also a casino game that goes by the name of Three Card Brag. Don't get the real game confused with the casino game; the casino game is just another dumb table game where you make bets against the house at losing odds. Unfortunately, just plain Brag is also sometimes known as Three Card Brag, to distinguish it from related variants 4, 5, 7, 9, and 13 -card Brag.

The gist of Brag is:
Note that there are no draws, no board, no cards to come, and no revealing of cards other than at the showdown. Thus there is no opportunity for hands to improve and no information about hands to be revealed other than through betting. The game is thus equivalent to one-card poker, other than the unusual betting scheme. Using three cards rather than one card doesn't have any significant effect on the gameplay, but it vastly improves the aesthetics, allowing for a variety of poker-like hands.


Since the betting procedure probably still is not clear from the above description, here's an example with four players:

Because both B and D have now folded, there are only two players in the pot, which means a showdown is now possible. Prior to D folding, the betting was required to continue; a showdown is not possible as long as there are three or more players still betting.

However, just because a showdown is possible doesn't mean that it is required. To get to the showdown, Player A can now see player C by paying 8 chips (twice C's bet); A's other options are to pay at least 4 chips to stay in, or fold, allowing C to win the pot. If A pays 4 to stay in, C now has the same options: put 8 in the pot to see A, bet at least 4 and allow A another turn to bet, or fold and allow A to win. This betting back and forth between A and C continues, potentially with either player raising the stakes by increasing the bet size on their turn, until one player pays double the previous bet in order to see the other player.


A crucial element of the game is playing blind. You can bet without looking at your cards; if you do, your bets count double. So the betting might run like this:

Normally, A could bet 8 in order to see C, since after D's fold there are only two players in the pot. But C is blind, and the rule is You can't see a blind man. A has to keep betting until either A folds, or C doubles A's bet in order to see A (paying 4 to double A's bet of 4 since C's blind bet counts double), or C finally picks up his cards and looks at them, making him an open player instead of a blind player.

If both players left in the pot are blind, either can pay double to see the other (a blind man can see a blind man).

If all but one player folds and the remaining player is blind, he does not win the pot. The pot remains and a new hand is dealt. The blind player keeps his unseen hand and receives a new one. He can choose to look at either hand (but not both); after looking, he must discard either the hand he looked at or the one he didn't, which then determines whether or not he is still blind. Alternately, he can look at neither and keep them both, both unseen, and remains blind until he eventually looks at one or the other.

If a blind player wins a showdown, he wins the pot.


There's a few other fiddly rules I haven't explained. Hand ranking is almost like poker, but not quite, with some oddities around the value of treys. The deck doesn't get shuffled after every hand. There's an ante from every player. It's possible to play with different types of stakes, which are comparable to (but not exactly the same as) fixed-limit, pot-limit, and no-limit in poker. You can play with larger hands but there's absolutely no reason to. You can play with wild cards but there's absolutely no reason to. The game is often played for what are essentially open stakes, but there are some common practices that make it somewhat more like playing for table stakes.

For more details on all of these, see the Pagat page on Brag: https://www.pagat.com/vying/brag.html

The game is of British origin, but is also widely played in India, where it is sometimes known as Teen Pati, which simply means "three cards". The Indian rules are slightly different, and include a method for having a partial showdown (a "sideshow") between two players even while there are three or more players still in the pot. Here is an interesting e-book covering both rules and strategy written by a professional Brag player in India: https://s3-us-west-2.amazonaws.com/casinooctopus/Professional+3+card+brag+ebook2.pdf

I encourage everyone to give Brag a try if your group is sufficiently flexible to do things out of the ordinary. If they're willing to play Guts or Acey Duecy or 7-27 then they definitely ought to be able to handle Brag, and Brag is a lot more like Poker than any of those.

F
Why has 7 card stud died out and what did the old timers like so much about the game?
2 3

F
I am training to be a casino dealer, and i have noticed a demand for poker dealers on this website,

Moved to new town, setting up a new home game.