My Journey As A Professional Poker Player

managed +$700 on the day. Had a pot against an over-aggressive player who had just gotten stacked and rebought for $300 where he straddled button, few limpers, I limp CO with

, he raises pot, one caller in HJ, I call CO

Checked to me, I pot it, button repots all-in and I use my "if I show will you fold?" trick on him, he doesn't seem comfortable when he responds so I call and find out he has

and I'm way behind, doh!

Aside from that, the table started to get less and less profitable as the night wore on, the fish busted and left, replaced by tighter players. There was a 5/10 with $25 rock table next to our 1/2 and the lineup was AWFUL. The two 2/5 with $10 rock games I played in weren't great either.

Definitely a really shitty shift in the fields of these games lately. I'm considering returning to TGT to see how the Monday game is, looks like it still gets 4 tables going, and the Cubans are gone now.

Heard Orange City has some great PLO cash games but it's a 2 hour drive one way and I just don't want to add that type of routine into my life.

Fortunately Poker Jeezus has smiled down upon me despite the less than desirable lineups with winning sessions. Heard Derby Lane in St Pete is starting to get some PLO action, but I checked tonight around 10-11pm and they just had five people on an interest list for 1/2 PLO so nothing to get overly excited about.

Outside of poker, my sciatica is come and go, but has been mostly a lot better lately. Trying to stretch more, go for more walks, take more breaks from sitting, etc. My gym has a class that is free which includes Pilates, yoga, etc. so I may check that out to help improve my flexibility and stretching as well.

Been messing around with my new computer and capturing myself playing games so I can keep developing the USAnumberWON character. Next up will be doing some work filming myself playing in costume and making clips for Youtube from that, then eventually growing that into a regular streaming schedule.

The guy who does some of the custom pieces for the interior of these themed builds is working on hers now so not sharing any pics until it's truly complete, but was great that it all worked without much issue.

Heard from a buddy this past weekend that he's found midweek at the poker room to be better than weekends (said true degens are the guys playing midweek) so with the casino offering me some mystery free play on the machines (up to a grand) that expires tomorrow figure I'll head there in the afternoon and see how it is. 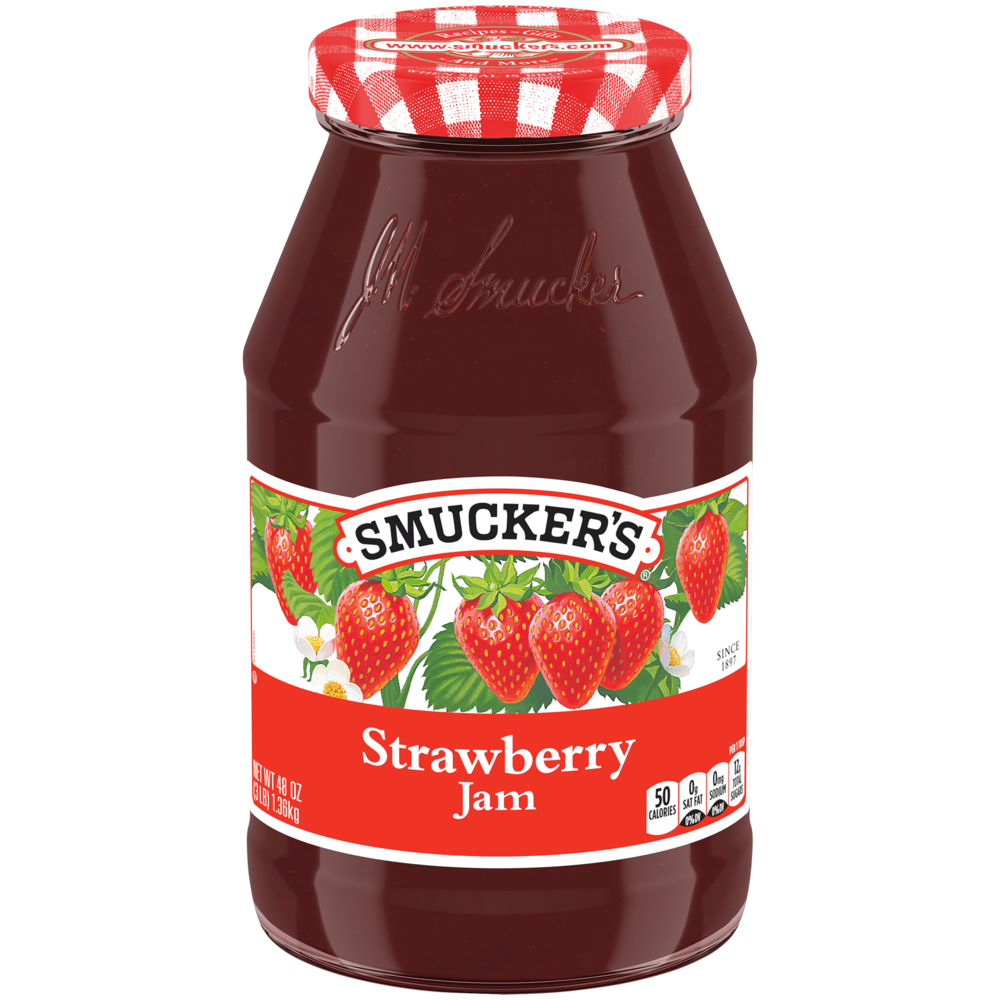 With a table of suckers, it's gotta be good.

buzzmonkey said:
With a table of suckers, it's gotta be good.
Click to expand...

Table is so-so, a few week spots, a few nits

My mystery free play was the absolute minimum $15. Managed to keep $11.25 of it via dueces wild video poker

Busted one of the fish, unfortunately he didn't rebuy and didn't have many chips, but moving in the right direction

Called the session after an hour and a half. Won $200 which is good for the time spent.

Still don't get the guys who try and soldier on when lineups are bad. Sitting in a game where the only way to make $$$ is by coolering other good players seems stupid to me. 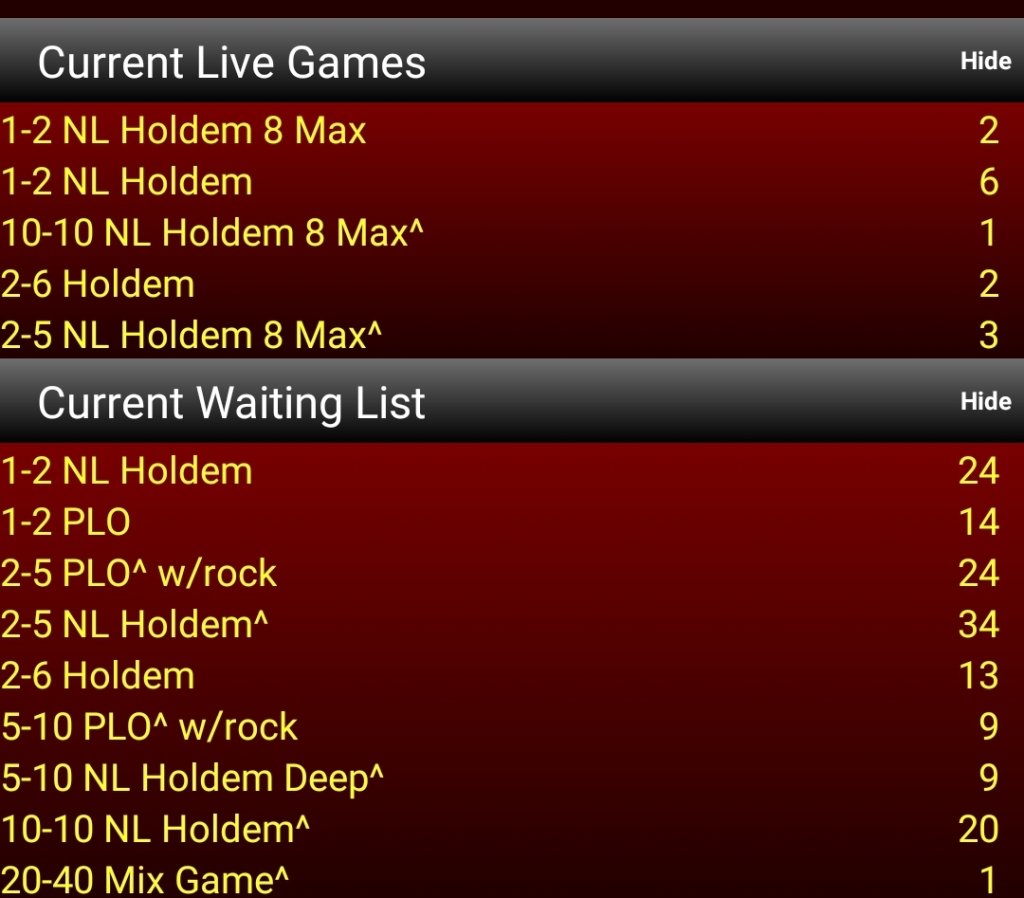 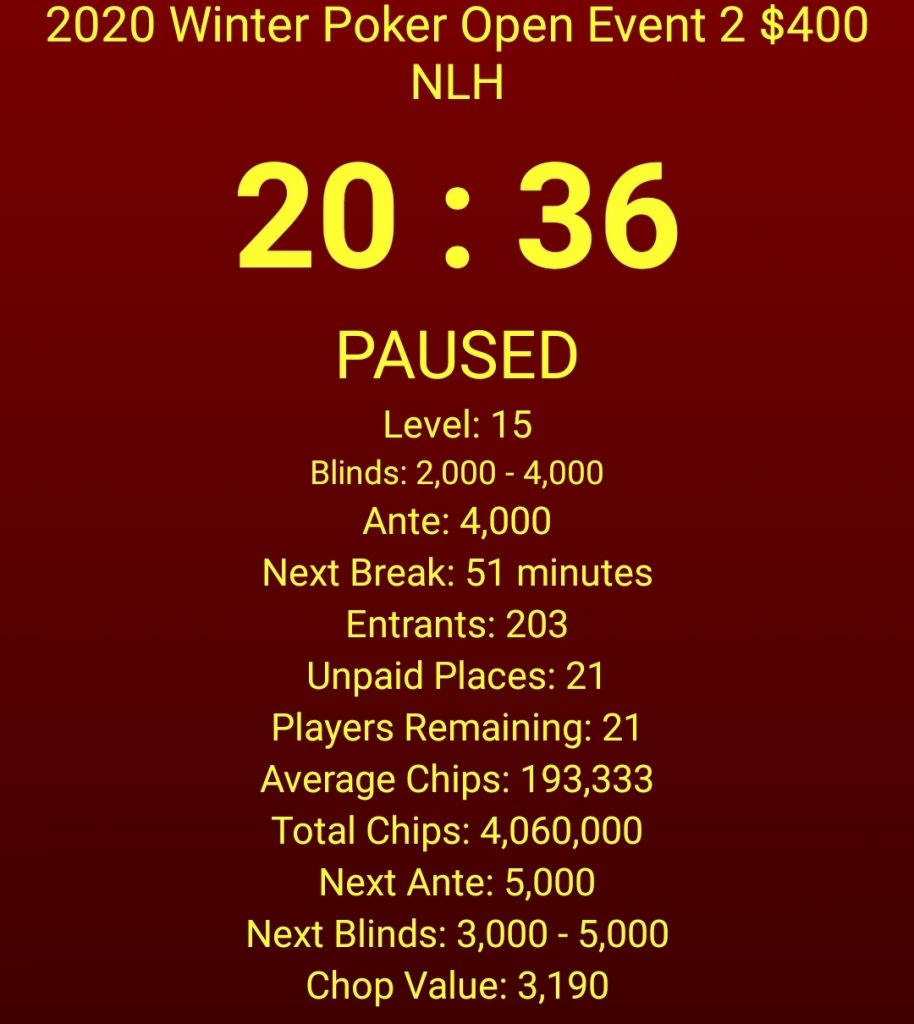 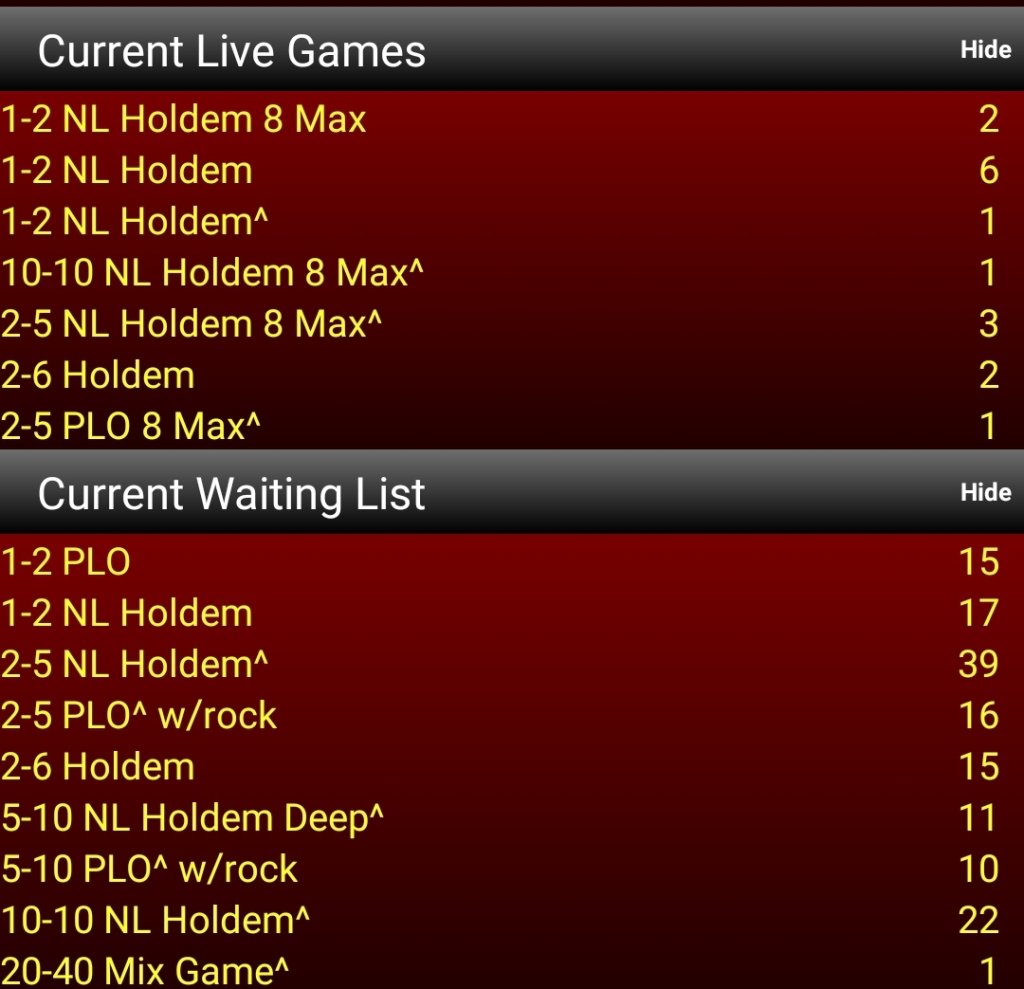 They only let you signup for two games so I used just my name the first time, then later swung by and used my card

On the lists for

I can only imagine he plays his blinds better than anyone

Anthony Martino said:
20/40 mixed game (started the list so I could be 1st somewhere lol)
Click to expand...

Anthony Martino said:
They only let you signup for two games so I used just my name the first time, then later swung by and used my card
Click to expand...

Was the name you gave them perhaps "Mike Postle"?

tabletalker7 said:
Was the name you gave them perhaps "Mike Postle"?
Click to expand...

In for $1500. Was down to $900 after flopping nuts on a flush draw board, bombing flop and turn, and having to fold river when flush hit

Managed to cash out for $1644 after we flopped top 2 pair plus wheel draw, and by the river had 4 pair that held

2/5 lineup is bad, about to meet a kid driving from west palm to sell him a graphics card for 2 grand, plus next on 1/2 list so cashed out

Successful sale of the card, now at 1/2 PLO

Lol, guy at my table called two all-ins pre with QT54 one suit, then flopped 367

The cards were due.
T

Are you on an RFID table? Where is his cell phone?

tabletalker7 said:
Are you on an RFID table? Where is his cell phone?
Click to expand...

He doesn't LOOK Cuban, but you can't be too careful these days

Props to floorperson Joe at Tampa Hard Rock who showed up in under a minute of a seat opening up to clean it, and brush Peter who was calling the next person right after

Credit where it's due, great service today!

Nice, another fish. Bunch of limpers, guy with K953 and three clubs raises to 10 from the BB, lol

Anthony Martino said:
He doesn't LOOK Cuban, but you can't be too careful these days
Click to expand...

Damn Cubans!! They can sneak in almost everywhere. Some of us them might even be on this forum just waiting to find you in a game some day.

redeagle said:
Damn Cubans!! They can sneak in almost everywhere. Some of us them might even be on this forum just waiting to find you in a game some day.

Ooch, put $280 in preflop with T987 ds against two shorter stacks (AAxx and KKxx) plus two other stacks

M
My Wanderings as an Amateur Poker Player
2 3