Hello! I'd like to host a charity tournament benefiting Alzheimer's research. I have no clue where to start. Looking for any tips you may have.

Here's a list of some facts/ideas about the tourney in no particular order:

- Fairly small, 2 tables with 10 players each? Maybe 3x8 if we can swing it, but it's a stretch.
- Some percentage of all buyins go to charity. Maybe half? Then the other half is a payout structure.
- Donation made in the name of the winner? Seems like a cool prize.
- Maybe players can opt to pay an extra $20 at buy-in? This gives them 1.5x starting stack and the extra money goes 100% to the donation?
- Food/drink provided or catered. This is supposed to be charitable, but it should also be fun.
- Cash game after the tourney is over.
- Would happen in the Fall, around my birthday (end of Nov). Hopefully would happen annually after that. Maybe after a few years we could grow it pretty big?
- Not sure if my crew would go for a $100 buy in. That'd be cool, though. Maybe.

- How tf do you run a big tournament?
- Would CPC make a small set of chips to be handed out as thank-yous? Maybe the trophy itself is a unique chip?
- Should I hire dealers? How much would that cost? Any expenses just mean we have less to donate.

I'm sure there's more. Thanks in advance!

I want tips from everyone, but I'm tagging @allforcharity because it's right there in the name.

@CraigT78 seems to know what's up with charity tournaments.

I have run a few tournaments to raise some cash for some things. I run a T10K, $50 buy in, 30 to the prize pool 20 to the fundraiser. Here is the blind schedule 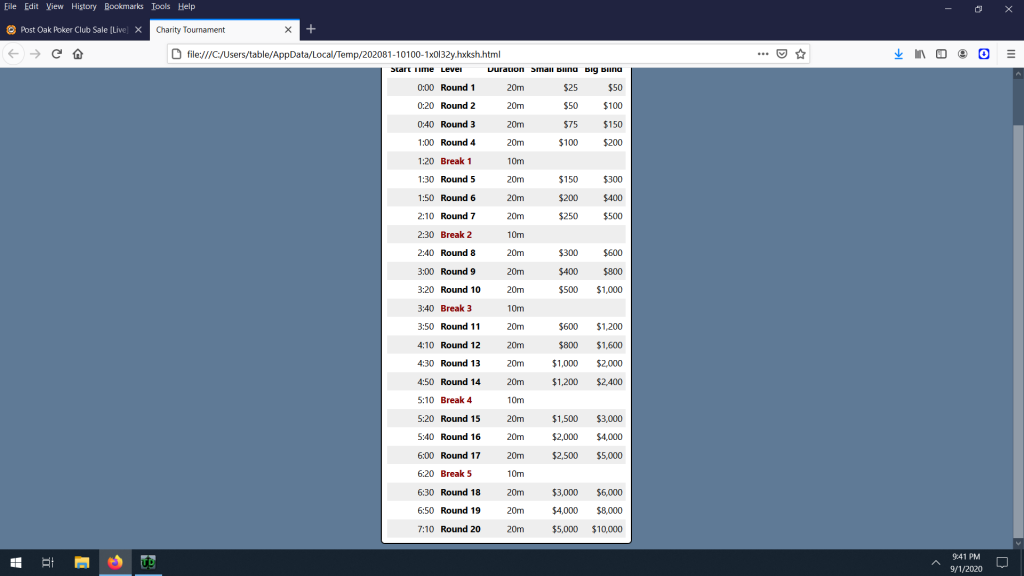 The blind schedule was the hard part. It has to increase slow enough to where dead money gets their money worth out of play, while not taking all day long so actual players think it is worth their time.

A few ideas:
- 50% of buy-ins and rebuys to charity
- Offer an add-on that goes 100% to charity. Make the $/chip cost of add-on lucrative so that basically everyone does it, and offer it early enough that most everyone will still be around.
- Have a more restrictive number of payouts than you'd typically have, so that winning is still a nice chunk - i.e. first place should at least cover two buy-ins and an add-on.
- At each blind increase, announce the new blinds and read a fact about Alzheimer's and/or the current state of research. Maybe even historical figures who suffered. A quick quip every 20-30 min is a good way to remind everyone why they are there, but doesn't bog down the action.

Most important - think FUN. Have a raffle, do a bonus chip grab bag where someone pays $5 to reach into a bag to pull out a bonus chip. Have most chips in the bag 100 with a few 500 and maybe even a T1,000. That was very popular.

1/2 buy in to charity is good. I also did 1/2 or rebuys and add-ons to the charity. Make the structure rebuy heavy, and allow rebuys a lot longer than you would normally. The last round, I double the chips for a rebuy. It leads to a lot of shoving.

Don't go too big for your first venture. Test the waters out. Try two tables, max. Try to keep the tourney short, maybe 4 hours. Allow as many buy-ins as you want. Would go 1/2 to charity, 1/2 to prize pool with top 2 cashing. Consider having a separate table game like blackjack to cover the casual gamblers, doing 30 minute rounds for a donated prize like a nice bottle of wine.

Don't hire dealers if you can get or teach a few volunteers, because you want to minimize your expenses. Always good to make it part of a larger party with cooked/catered food, drinks, etc. This is almost always best done as a private event in your own home to minimize legal hassles.

Don't bother talking to @BGinGA that guy doesn't know anything
Last edited: May 10, 2021

I have played in several charity poker events over the years and I ran a charity scholarship tourney for several years, here are a few things to think about and some of the things that I did. We started out with about 15 - 20 players, and near the end we were averaging about 35 players. We were running the game monthly.

You mentioned doing some percentage of the buy-in as going to the charity. I'm not sure about NV laws, but in Texas that would be considered the house taking a rake and would not be legal. So make sure of your local laws so you don't get into trouble when trying to do good.

Most of the straight charity poker events there is a charitable donation entry fee to the tournament, and then everyone plays with fun money with the opportunity to buy prizes at the end of the night. The donation is tax-deductible for the players, but these are normally run by the organization themselves, but this does not sound like what you are looking to do.

The event I ran had a $30-$40 buy-in depending on the tourney. All of the buy-in went to the pot to pay out the top 3-7 places depending on the number of players. We also let all the players know that we were trying to raise scholarship money and that if they wished to donate it would be appreciated, with a suggested donation of $10+. The donation was not required to play in the tournament, as that would have gotten us into trouble. We did have a couple of lawyers in the group advising us. There were a lot of tournaments that the winning player donated some or all of the winnings to the scholarship fund, but it was never asked or required. We always had very generous re-buys and add-ons, so those increased the pot.

Some thoughts from my experience:
Feel free to reach out if I can be of any assistance or share any other lessons learned
A

I have been part of planning a poker fundraiser for the past few years. We decided NOT to hire dealers as they are expensive but they bring everything( tables, chips, TD, dealers, and cards). It has worked out fine.

regrading how to run a big tournament call your friends and have them call their friends we have had about 30 people every year
You must log in or register to reply here.

Tourney Has this been done before?