Most of you know I'm a TRK nerd. I have been working on a Nevada Club/Lodge set for a while and it keeps growing. I will post the whole set in a week or two when some new orders come in but I wanted to share these special chips separate with their unique story.

LaVere Redfield was born in 1897 and grew up poor in a family with six siblings. His father passed shortly after his birth and he was raised by his mother and brothers. He worked briefly for his brothers before setting out on his own and taking a job as a potato digger.

Redfield saved his money and then worked his way up as a store clerk and eventually saving enough money to marry his sweetheart and honeymooning in California. While in California Redfield walked by a brokerage office and got caught up in the frenzy of the oil stock exchange that was taking place.

The following day Redfield went back and purchased some stock in the oil well syndicates. This set in motion a path that Redfield would take to making himself a millionaire by his 30's. Redfield survived and even thrived during the stock market crash of the 30's.

Distrustful of banks Redfield would get bags of Morgan and Peace Silver Dollars from the bank and hide them in false walls in his basement. This behavior led to him getting robbed several times in his life. Redfield hated paying taxes on his large house and eventually went to jail for income tax evasion.

Despite his penny pinching ways Redfield was an avid gambler. Redfield would walk the mile and a half to the Nevada Club from his house so he wouldn't spend money on gas.

Redfield loved roulette and worked on building his system. He was friends with Lincoln Fitzgerald who owned the Nevada Club (another interesting character). Fitzgerald would let Redfield bet higher limits and had special chips made only for Redfield to use. TR King records show that 1000 of each color were ordered in 1954. Redfield was even allowed to spin the ball himself on occasion. They were non denom so Fitzgerald could set the limits to whatever Redfield wanted to gamble for the day.

I have been collecting these chips for a while buying one or two at a time off ebay. Anyone who has tried this knows it's a long and expensive process. I recently was able to acquire enough to fill out a rack of each color and without further babbling from me here they are. 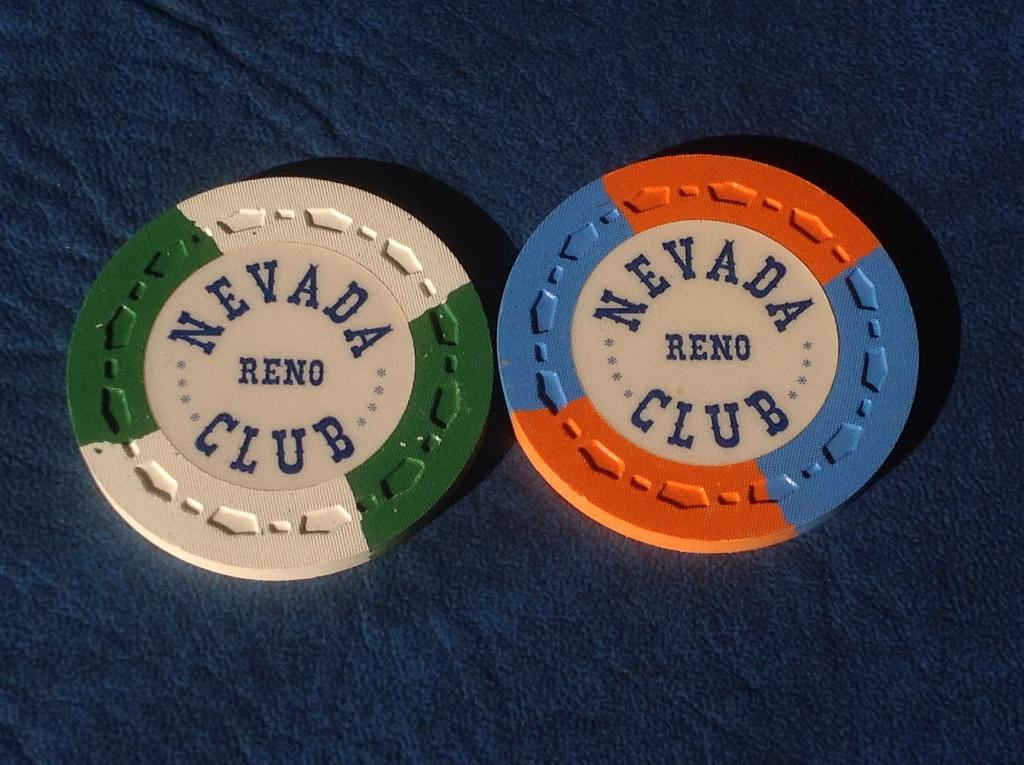 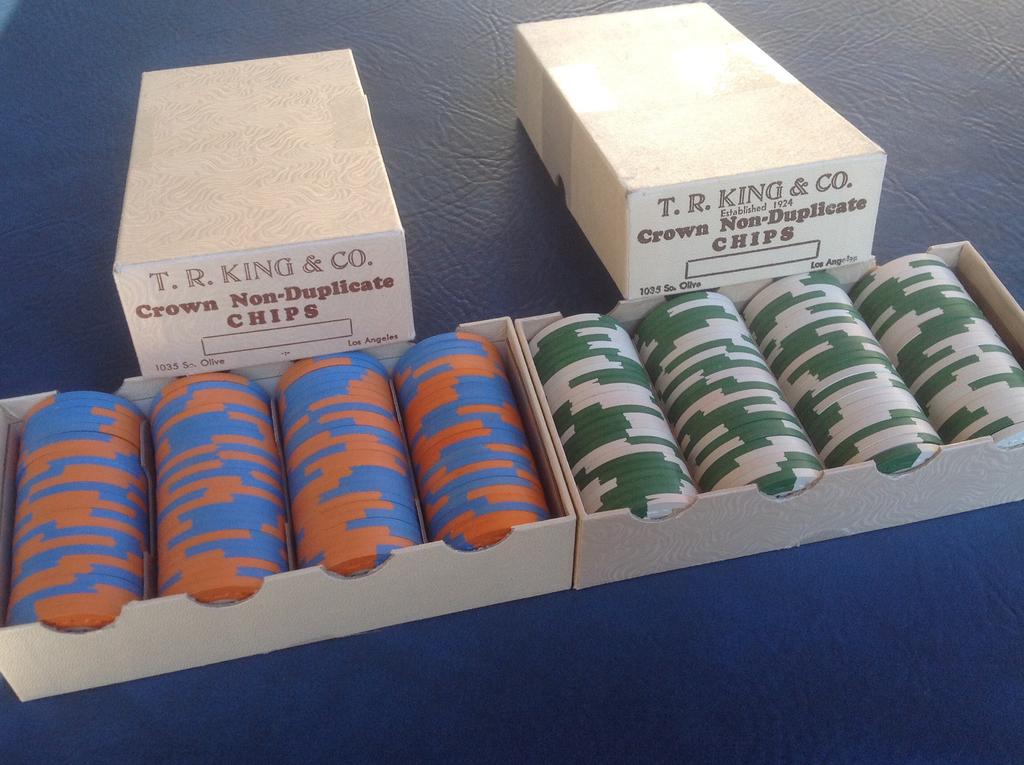 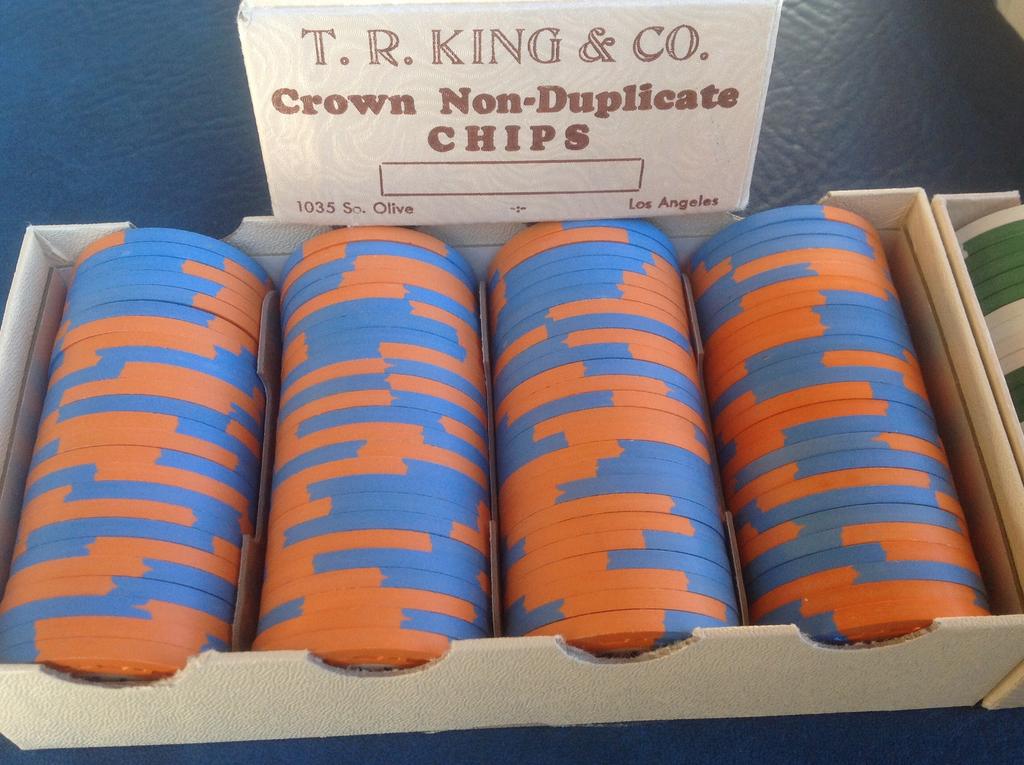 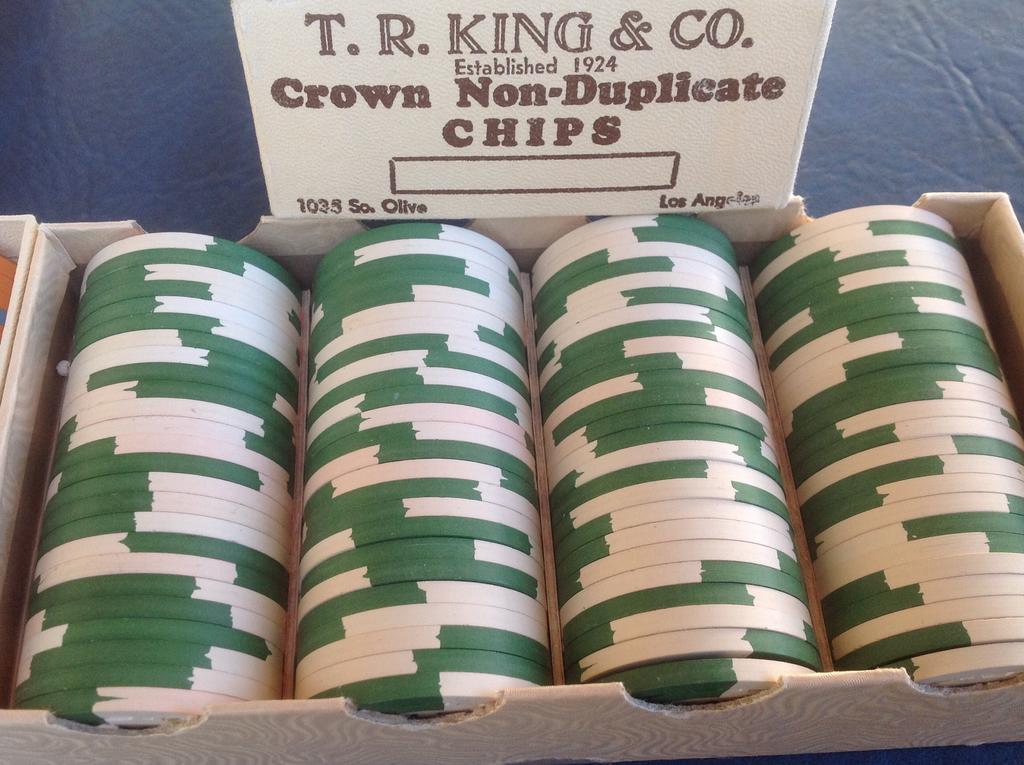 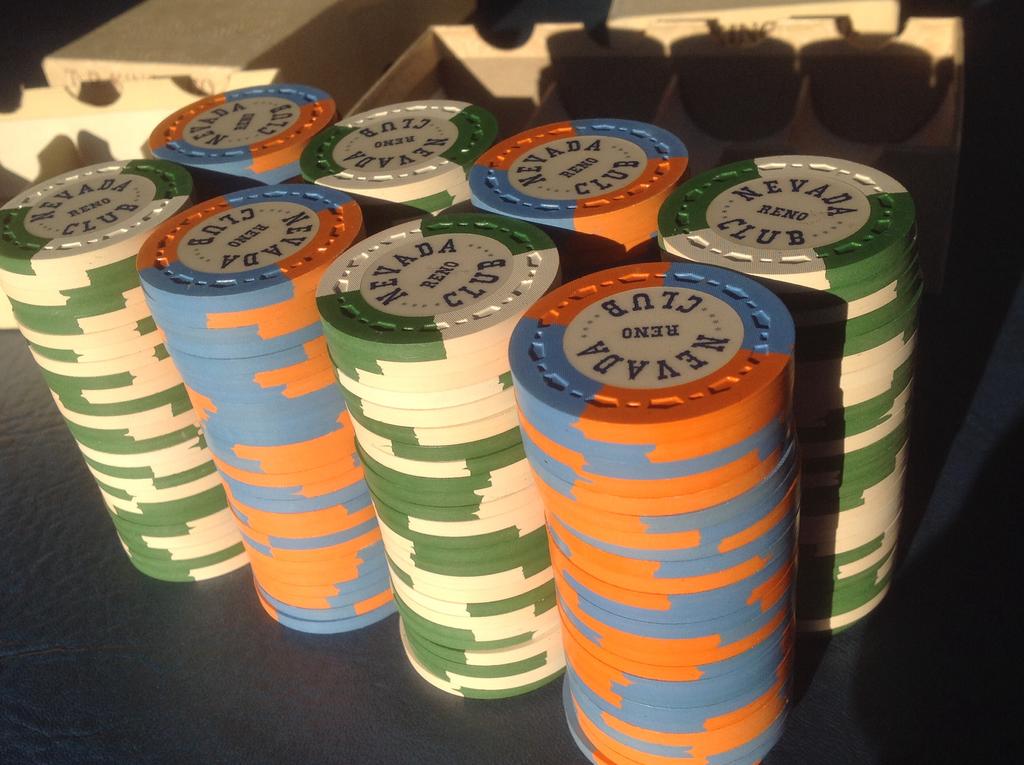 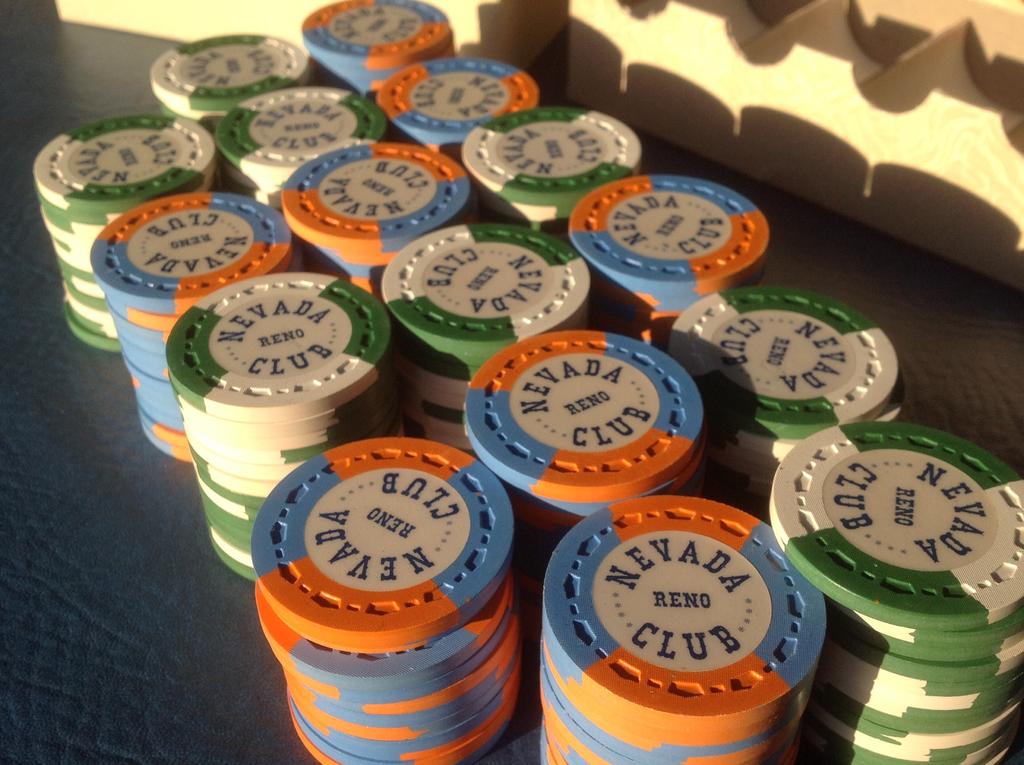 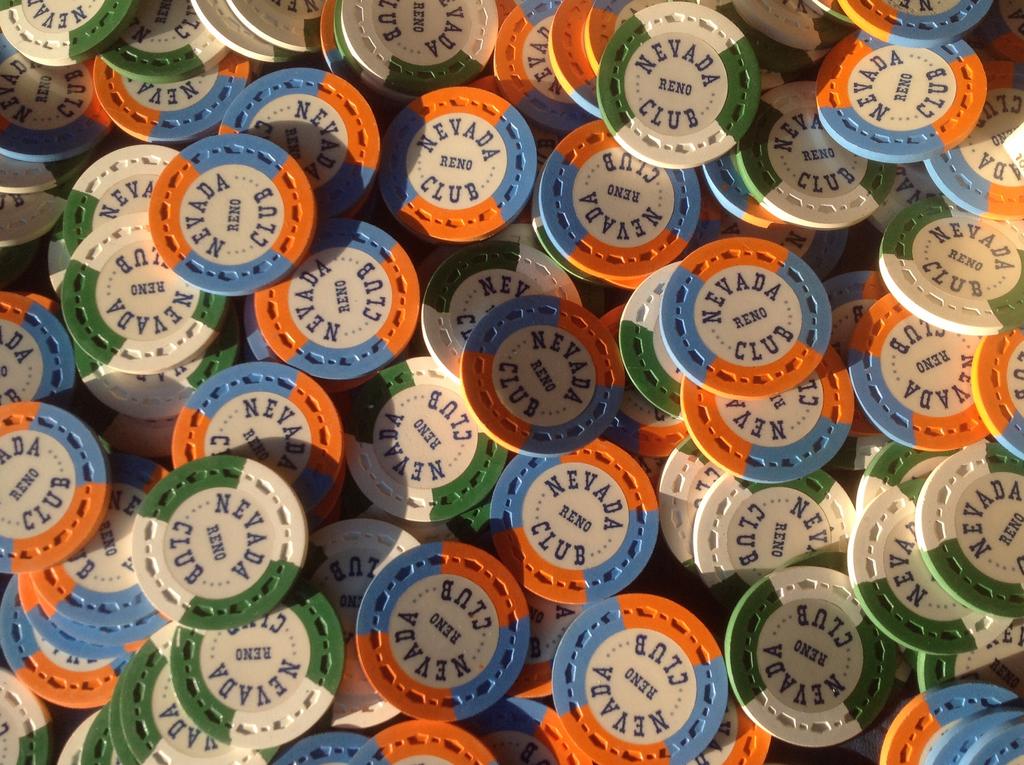 There is much more to his story and I'm currently reading his Biography. Thanks for looking.

Wow, amazing chips and interesting story. Thank you for sharing these and all your other great TRKs.

Congrats on completing two racks, and thanks for sharing.

The story is incredible - i read so much about this and the story of this guy is something else - not to mention the chips are a very RARE find and im sure cost a pretty penny - without going into too much detail how did the chips come about ? Are they mint ? How long did the Nevada Club do this for him? Seemed like the owner was a piece of work too - great read thanks for sharing

Great read and great pictures. Thanks for sharing.

Awesome set David, guess you'll be looking for the roulette table he used and I wouldn't be surprised if you found it! Great set, great story! Thanks for sharing.

You da man, David P. Hey, those would make a nice fractional chip if you play those stakes. Love TR King quarter-pies. Thanks for sharing the story and can't wait to see the rest of them.

Dwight87 said:
You da man, David P. Hey, those would make a nice fractional chip if you play those stakes. Love TR King quarter-pies. Thanks for sharing the story and can't wait to see the rest of them.
Click to expand...

Using them for fracs was exactly what I was thinking. I have 43 .25 pink hotstamped Nevada Club chips but it's been hard to find any more in quantity. These will work until I can find them.

@ JFCJ if you find that roulette wheel let me know!!!

very nice story and chips! i hope we will see the entire set as soon as possible!

Awesome score. Those look like they are factory fresh. Congrats!

Great chips and an even better history behind them! I'm glad you were able to find some in bulk. Good luck with the build!

In another verified story Redfield was walking home from the casino with $2500 in winnings in a paper sack under his arm ( 1948 ) He was confronted by a man who claimed to have a gun and demanded the money. Redfield (a small in stature man) refused. The robber then clobbered Redfield in the head with a brick but Redfield still refused to give up the money. Redfield told the police he was hit 12-15 more times in the head before the robber finally fled without the money Redfield still clutched.

He would recover but not before spending a month or so in the hospital with a fractured skull. Some say that his real unusual behavior began after this incident.

Redfield would suffer more robbery and burglary attempts later. To avoid these he dressed in worn jeans and a flannel work shirt and rarely let himself be photographed... More later
Last edited: Feb 1, 2015

^^^ You need to read Harold Smith's autobiography "I Want to Quit Winners." Amazing stories of Reno from the golden era.

gopherblue said:
^^^ You need to read Harold Smith's autobiography "I Want to Quit Winners." Amazing stories of Reno from the golden era.
Click to expand...

I have it also E. Both are great reads and insights to early Reno.

Can you post some pron with the new racks you have ? It would be nice to see the final tally. yum yum
J

not sure how i missed this thread until now, but beautiful collection, David! and excellent stories!

They can be seen here http://www.pokerchipforum.com/showthread.php/5122-Nevada-Club-Lodge-Set?highlight=Nevada+lodge

jbutler said:
not sure how i missed this thread until now, but beautiful collection, David! and excellent stories!
Click to expand...

I was thinking the exact same thing.

just getting in on this... So cool

Still jealous of these chips...

liftapint said:
Still jealous of these chips...
Click to expand...

I just love those chips and the story behind them!
Also in 1954 he had 99 of these chips made numbered 1 to 99.
I only have this one but they have to be out there, no? 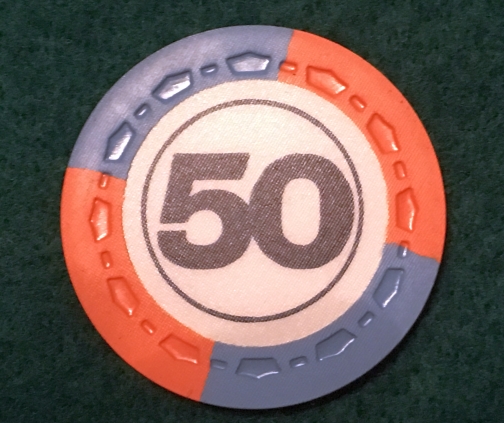 LaVere is pretty O.G. in our community. When these chips were made (so that Mr. Redfield could play nosebleed-stakes roulette at the Nevada Club) I think inlaid compression chips were a something of a big deal. I bet he'd get a kick out of them being used as fracs some three generations later.

Thank you for sharing shots of them! It's cool to know that some are still together and have not been parsed out into 400 individual collector sets.

You have me curious about those numbered chips now, PAZ. Do any ever pop up in the individual chip market or in photos of people's collections?

Just once and I had to grab it.
You must log in or register to reply here.

Illegal Gambling, The Purple Gang, The Hollywood Club... and more