So I've come out of the shadows and am very close to contacting someone like J5 to get my inlays done right. I work in Saudi Arabia and when a person leaves this job to go home, they are granted an "exit only" visa, hence the name for my card lounge where ever it may be. The chips are Middle East theme, colorful and silly. The characters are South Park like but do not use any actual characters from that show. I stumbled across some images on the internet that were part of an ad campaign for arabianair about 8 years ago. There were quotes from Comedy Central VP at the time there were no grounds for any lawsuit or copyright violation as they were only similar so I'm planning on using these with some photoshopping of my own. The actual characters will be a bit different than what you might see here. If CPC and my future design artist have no issues, then these will be in the pipeline very soon. Inlays are somewhat attached because apparently I'm too stupid to figure out how to get my inlays into the chip builder. I played around with the camel and none of the images are set in stone regarding what chip they appear on. It is very rough. There are 7 chips, the 5 chip will not be made this time and isn't uploaded. Comments more than welcome. I like the colors but do not have a sample set yet to make sure and am trying to avoid any clash of shades. Help me out with some suggestions. I figure a 2000 chip is most useful so it is split color between a 1K and 5K Not sure if I should use 25K or 50K for Orange. It probably won't be needed for play but I could get some of them made for kicks. The shaped inlays limit size so as much as I like them, perhaps I go round on some. In the future I could go low denoms for a cash set of these. Here is the basic plan:

That's all for now.

Definitely digging these so far. The only thing that throws me is the vertical denomination on the T25. Other than that they look good! Good colors and spots!

I like your original 100 still but the new one is pretty hot too.

I like this much better. It fits in with the rest of the set better for sure.

Looking good so far, but I think hex shaped inlays aren't available at the moment.

Not sure if there would be copyright issues with this, but you can create your own South Park character on the Comedy Central website. http://southpark.cc.com/avatar

You looked into the Law in Saudi Arabia about any gambling products right?
J

in general, i agree with BG, but there are certainly times it works. see the rounders hundo for example. i think dg green works well enough so long as the $25/T25 doesn't use a dg green base. with light green it's a bit closer, but dg green differentiates itself enough imo.

10,000 chip for the win! I love the gravitas that dude & the design bring to that denom!

Looking very nice, add another sample set to what I already have on Order......
J

DG Green would work on the $100 but maybe try Light Blue in that spot instead and see what you think.

I think this should be a fantasy chip theme for a ceramic set!

slisk250 said:
I think this should be a fantasy chip theme for a ceramic set!
Click to expand...

it is a fantasy...oh for a chip set. right, chips.

Love this theme... in for a sample set if you make them available.

Shaggy said:
Love this theme... in for a sample set if you make them available.
Click to expand...

Here is the final mock for this order. David said to plan for some members wanting samples so I'll order a few extras. I'm ordering 2025 chips. The denoms will be 25, 100, 500, 2000, 10000. The DG Peach chip is bounty and the Mandarin Red is rebuy/add on. I can't decide on the last spot pattern so there are 8 chips listed. Anybody have a preference? Let me know.

Very nice lineup -- I'm in for a full sample set.

I'd go with the 3T316 mandarin chip, and I'd have it made with no denomination or markings at all -- so it could be used as a T5, T50K, Rebuy, or whatever you wanted at the moment.

slisk250 said:
Here is the final mock for this order. David said to plan for some members wanting samples so I'll order a few extras. I'm ordering 2025 chips. The denoms will be 25, 100, 500, 2000, 10000. The DG Peach chip is bounty and the Mandarin Red is rebuy/add on. I can't decide on the last spot pattern so there are 8 chips listed. Anybody have a preference? Let me know.

Second red chip is great. Peach chip you may have some issues. Dark blue and dark green are very dark colors, you won't be able to tell them apart unless it's up close IMO.
J

One of them is my avatar now... I'll post them in a few hours when I go to work, might have a few samples available. I got down a few names of members who wanted them so I had a few extra made. I hope to have my hands on them June 27!!

Here are the production mocks from J5. I am making 2/3rds of the tournament set in color gradient one side red denoms and the other black denoms. 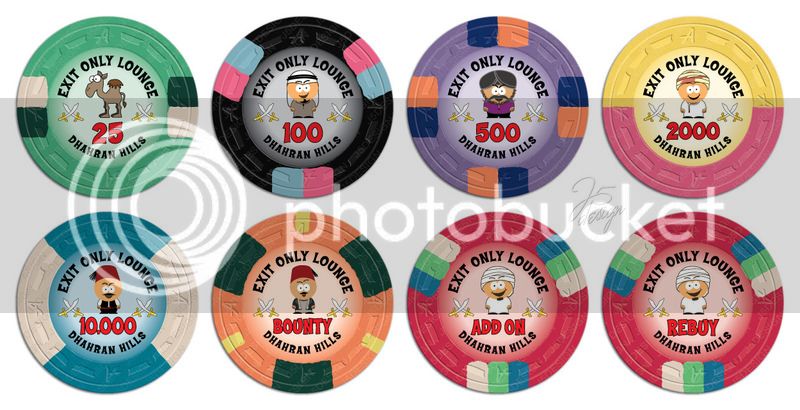 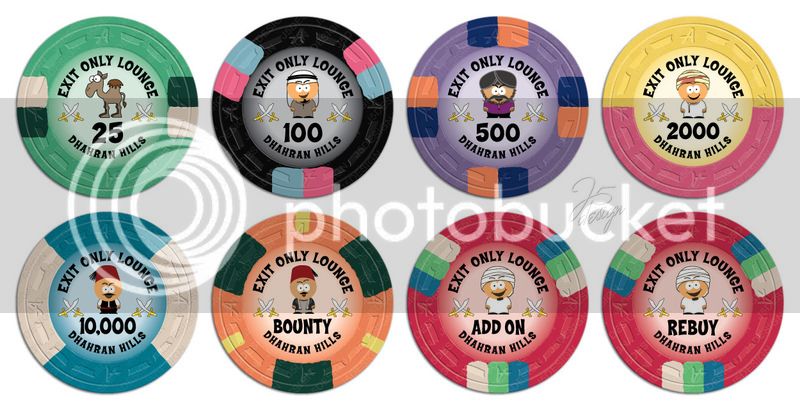 The rest of the tournament chips will be black inlays - probably no sample sets of these... 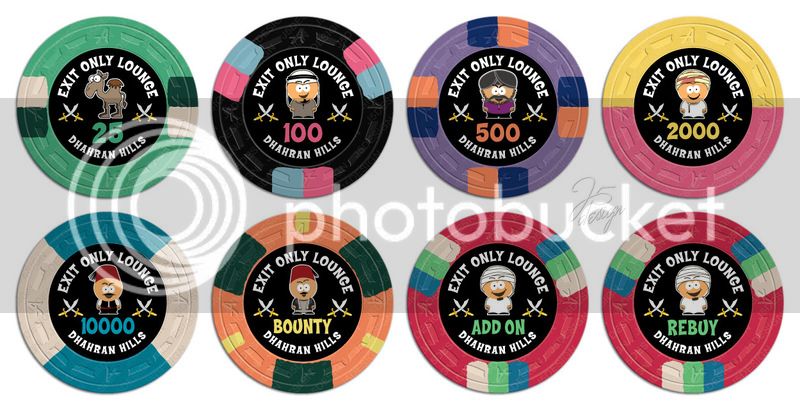 Cash is black inlay only. 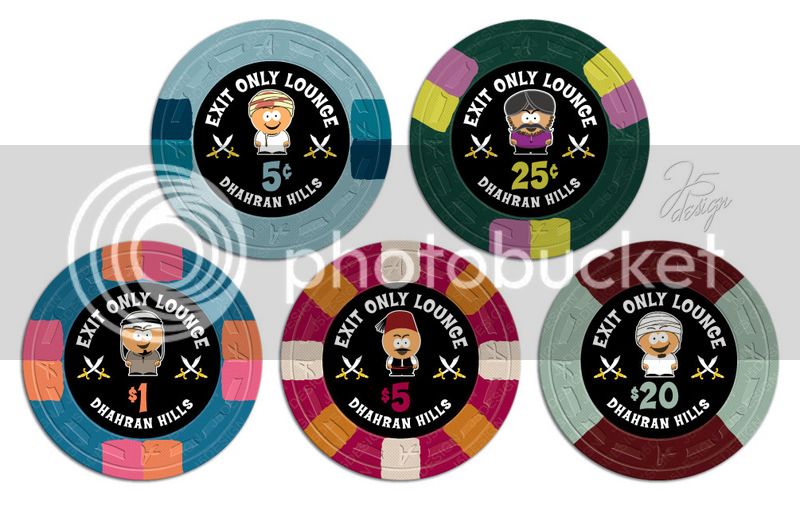 You know I'm in for a sample set if there's some left.

I'd love a sample set if you do them as well!
You must log in or register to reply here.