Wish I had the room to get a real table or else I'd be all over it plus I do like taking things apart and putting them back together / modding them, computers, engines, plumbing, toaster ovens... have little idea what I'm doing to start but you name it and I'll take it apart to figure out how it works !

I did this today. Quick primer, i suck at diy, had only 4 clamps, a staple gun and a manual philips screwdriver. I would advise you probably want at least a posi drive if not an electric drill/screwdriver. Going to take you through my steps, along with a piece of advice so you can do this too. I would not say it is easy, it took me nearly 5 hours, but like i said, I had rudimentary tools and wanted to make sure i didnt screw up...

1) LABEL EVERYTHING! It makes everything a million times easier. Label the legs, the table sections, the legs attachments, the hinges. Just do it.

2) Remove legs. I place them in this position with the right leg over the left side. My table was very taught with the silver cable between the legs so it made this a tiny bit awkward at first. 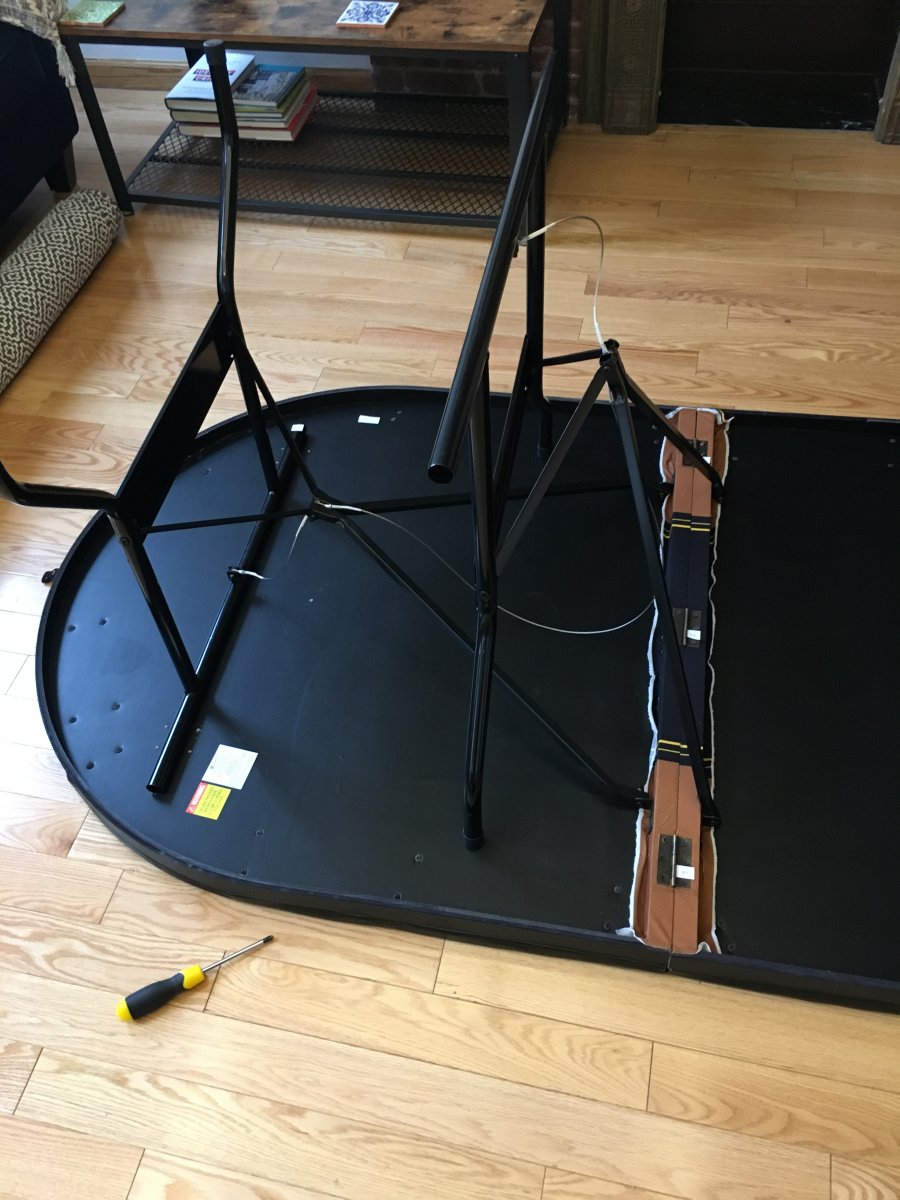 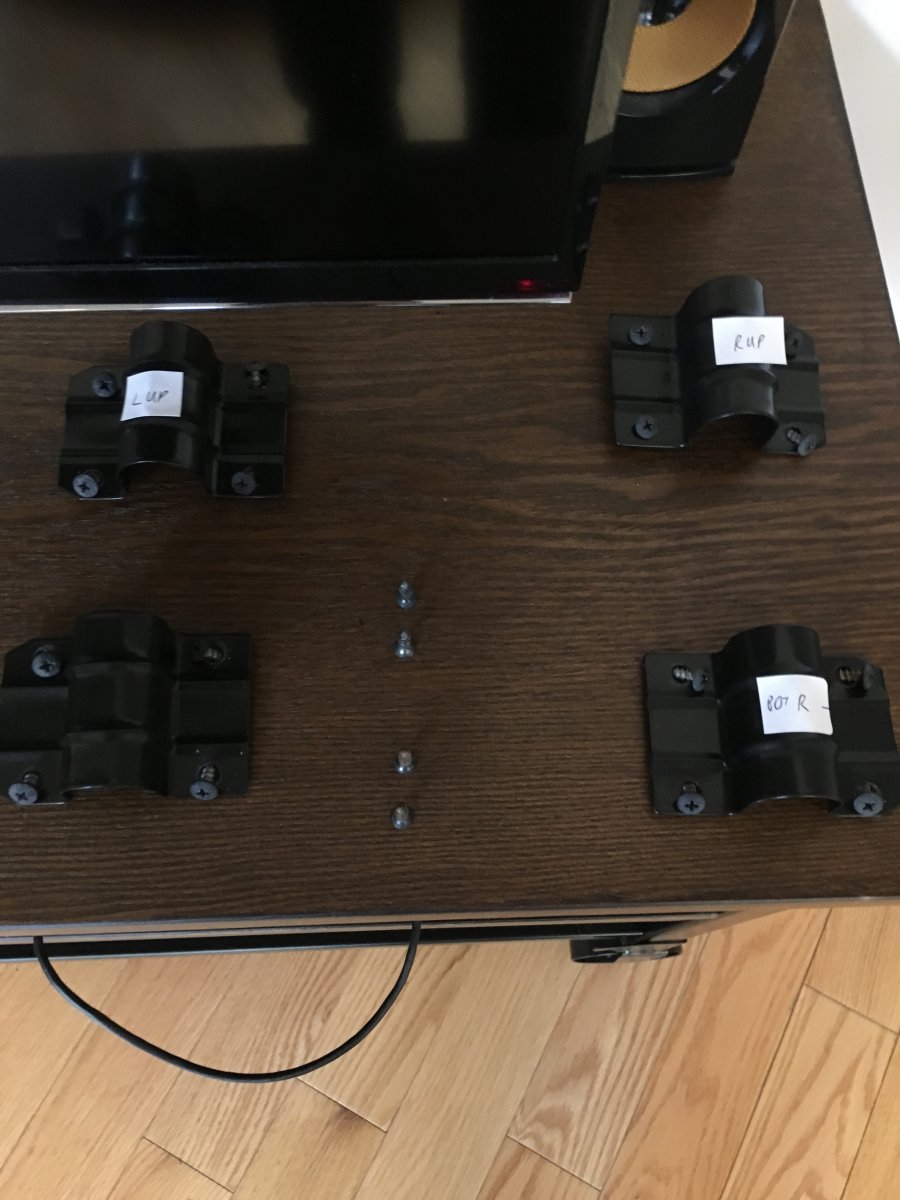 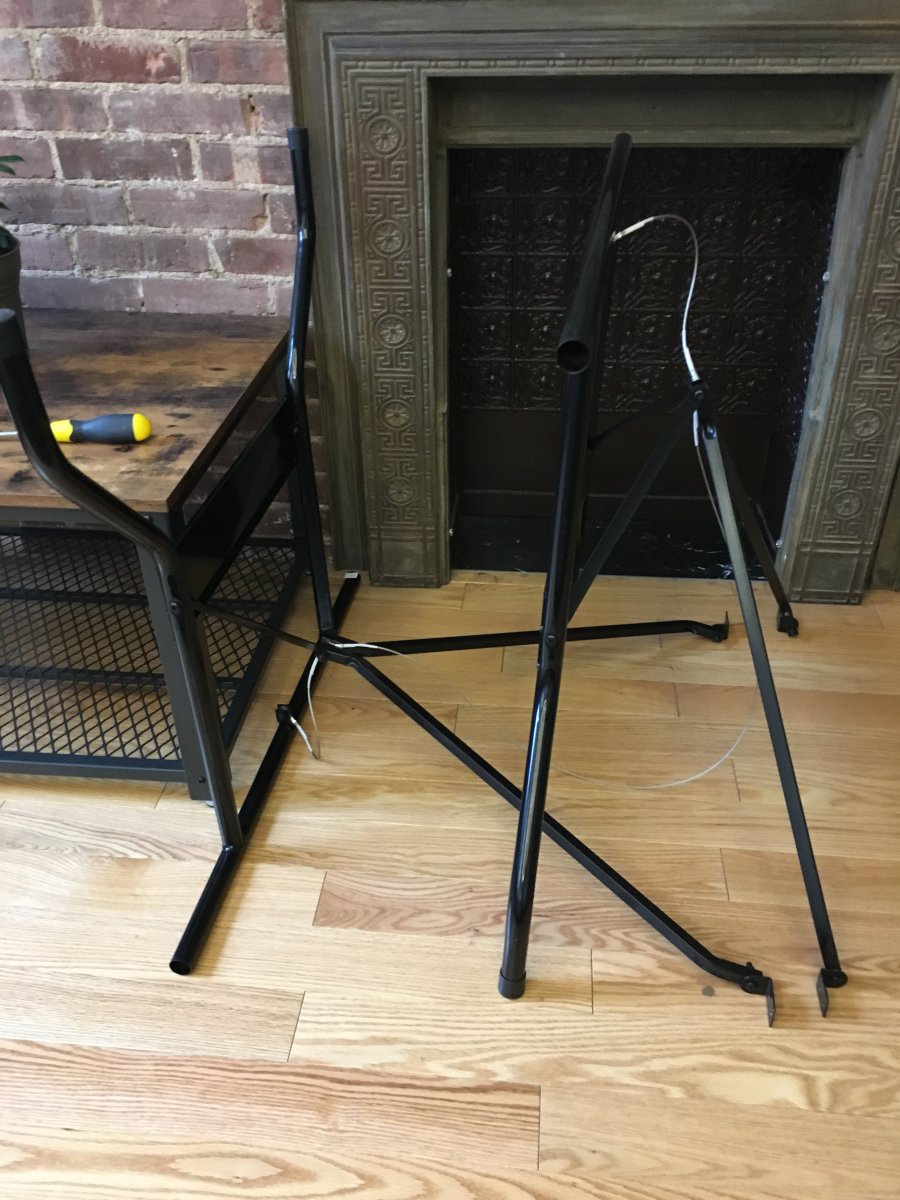 5) Definitely label your hinges, these are a ballache to get off and then to reattach at the end. You really need the right hinge and screw in the original spot 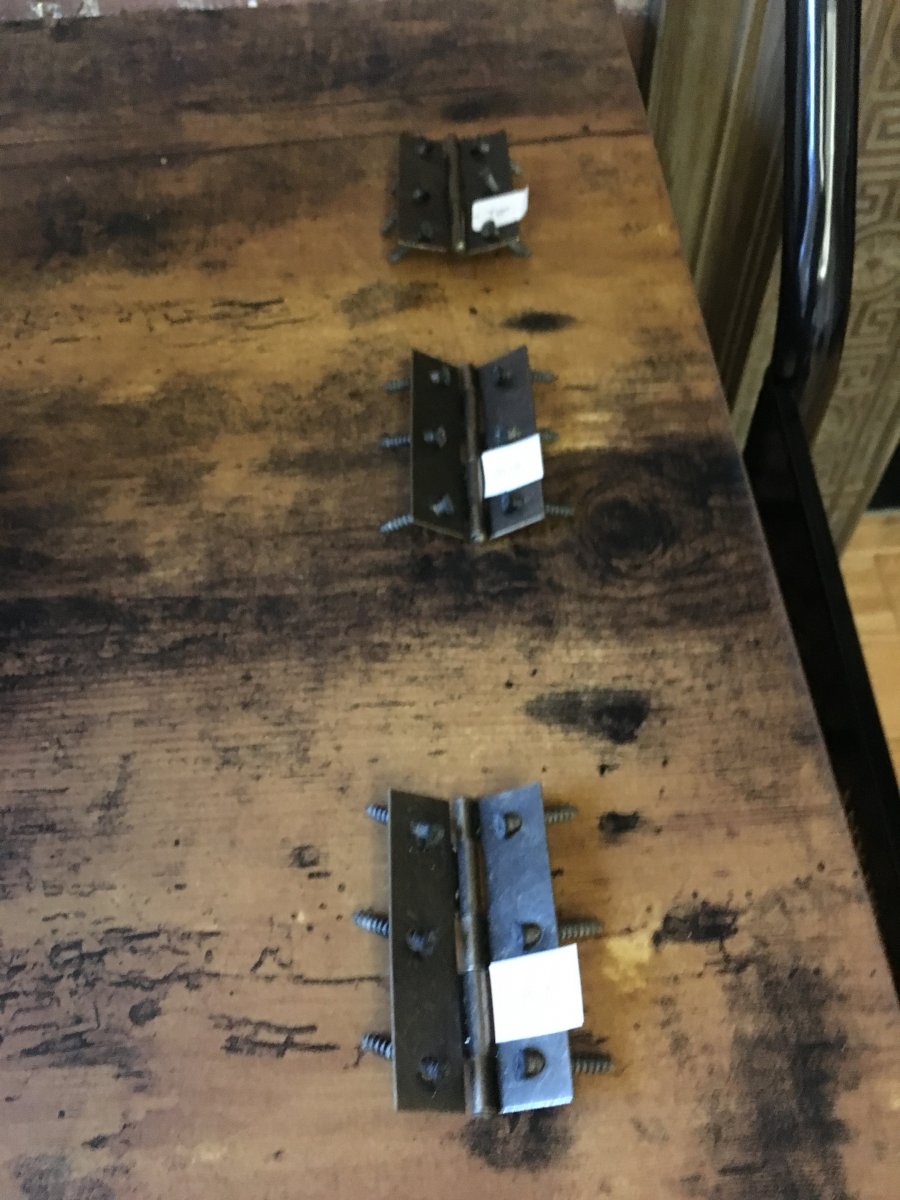 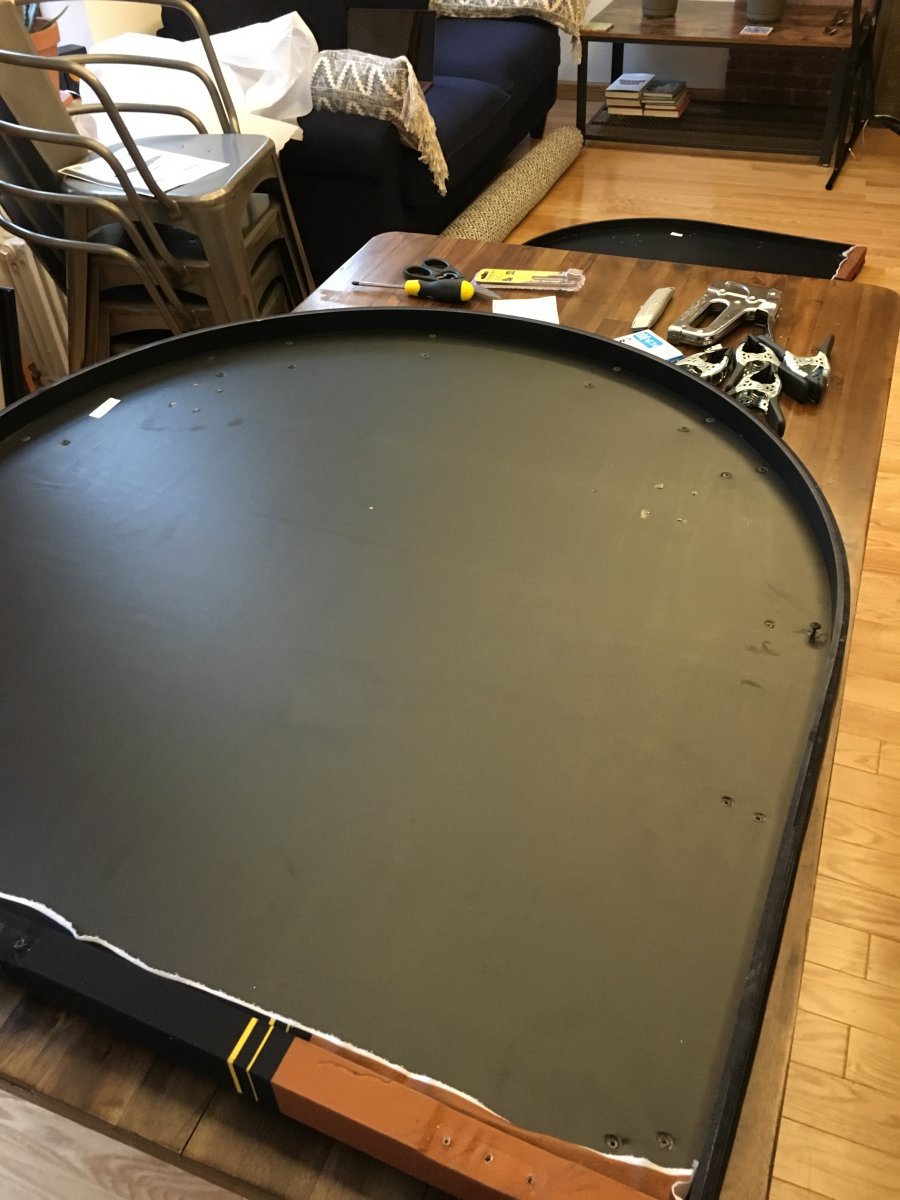 7) Remove the screws from all the rails. Definitely keep all of these in the order they came out! 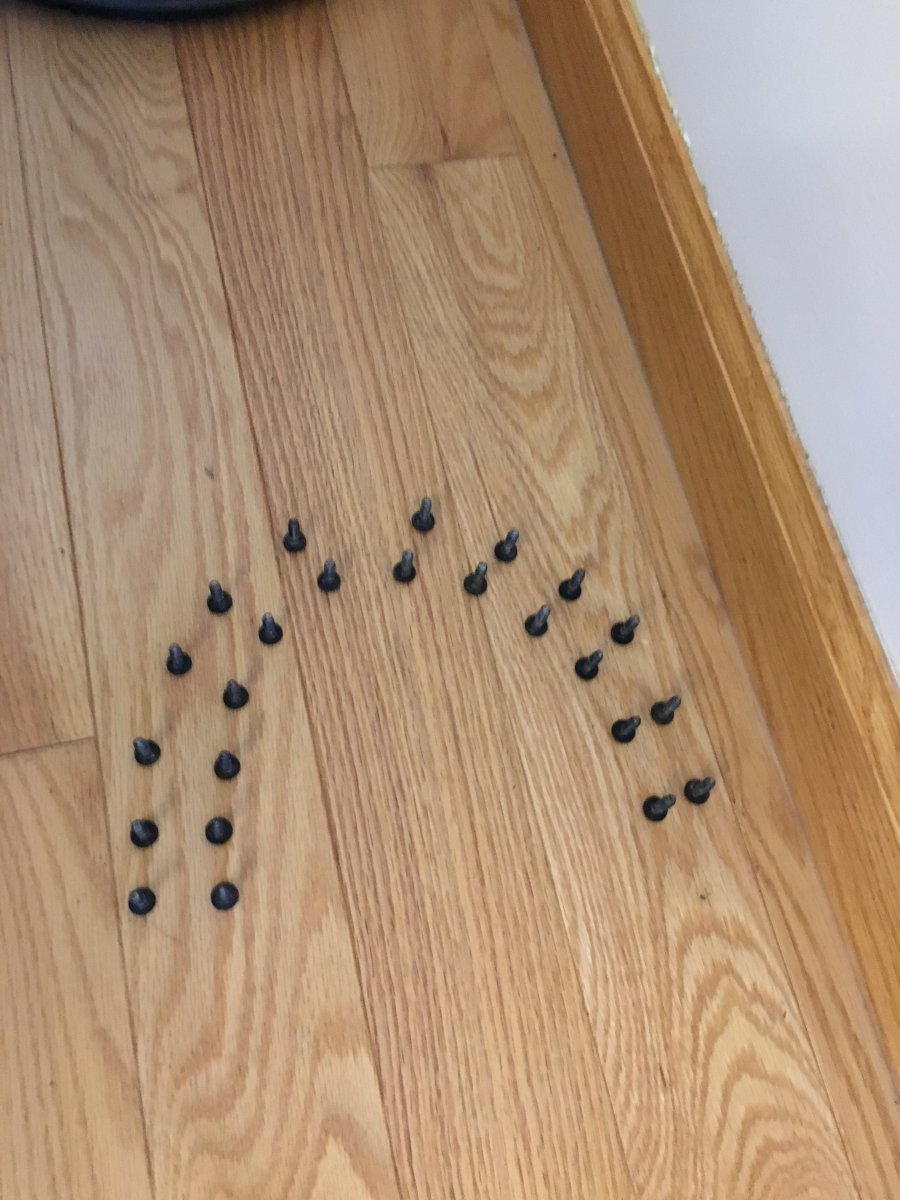 8) Pry off the rails. At first i was gentle but then only some of the glue came off and it was messy. When i was more forceful, the glue was left on the board and could easily be removed along with the felt... 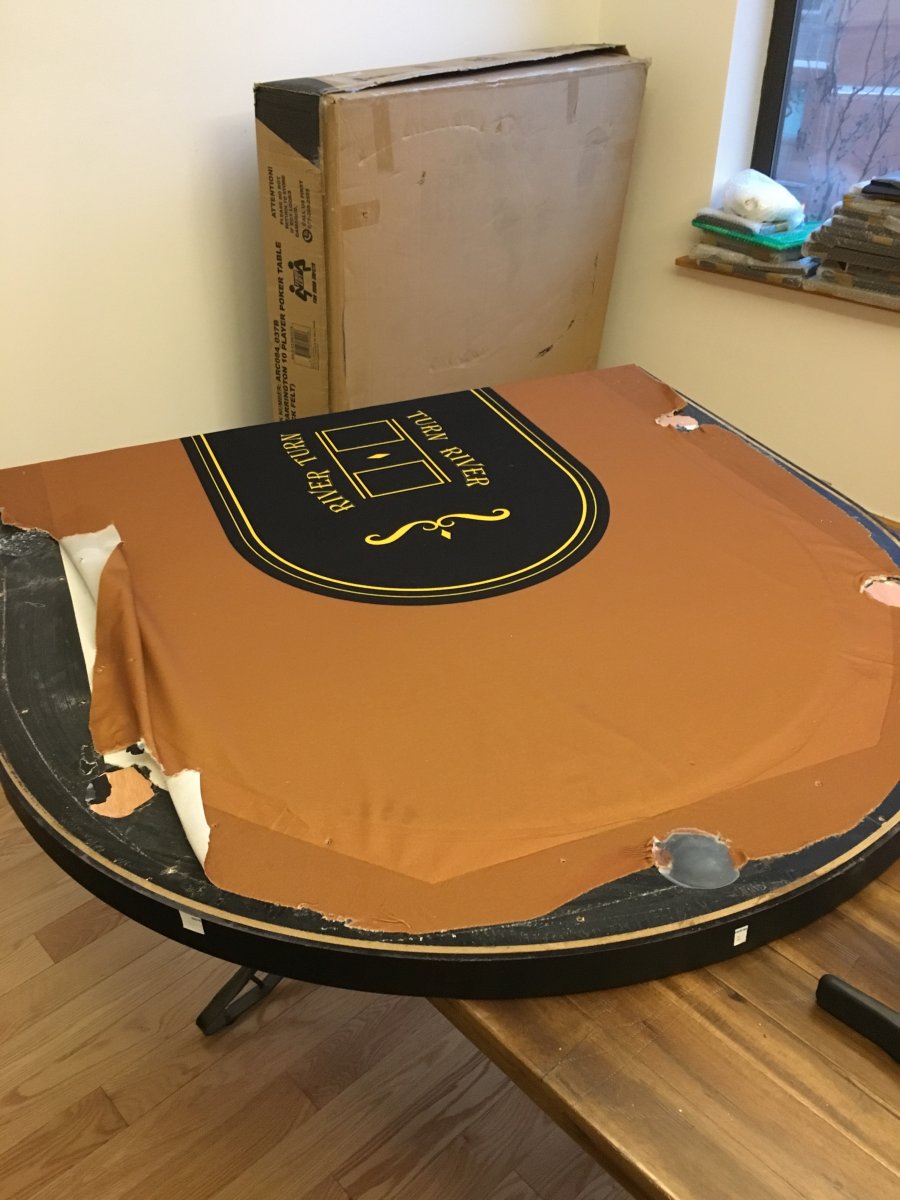 9) Label where the rails will go back! 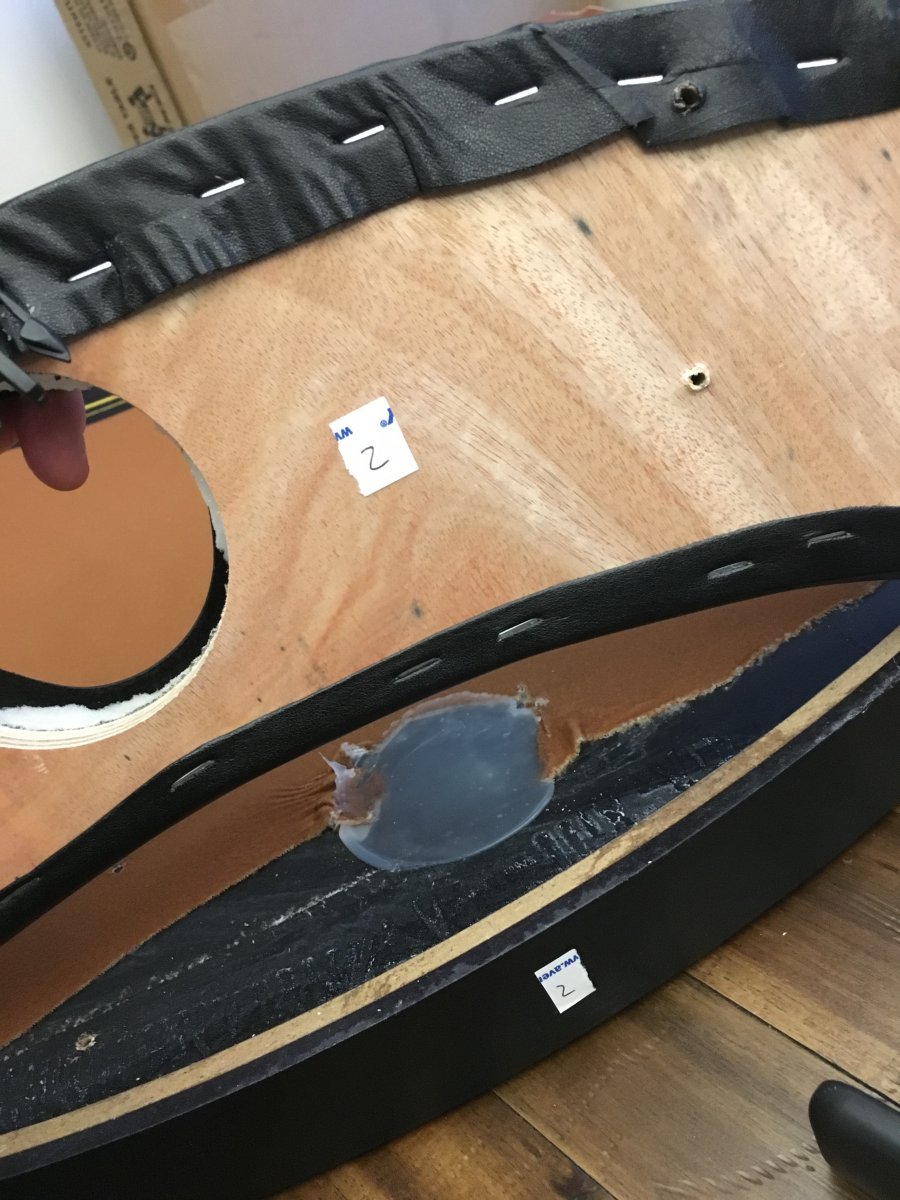 10) Remove the felt. You are best off just ripping it out from under the staples on the underside.\ 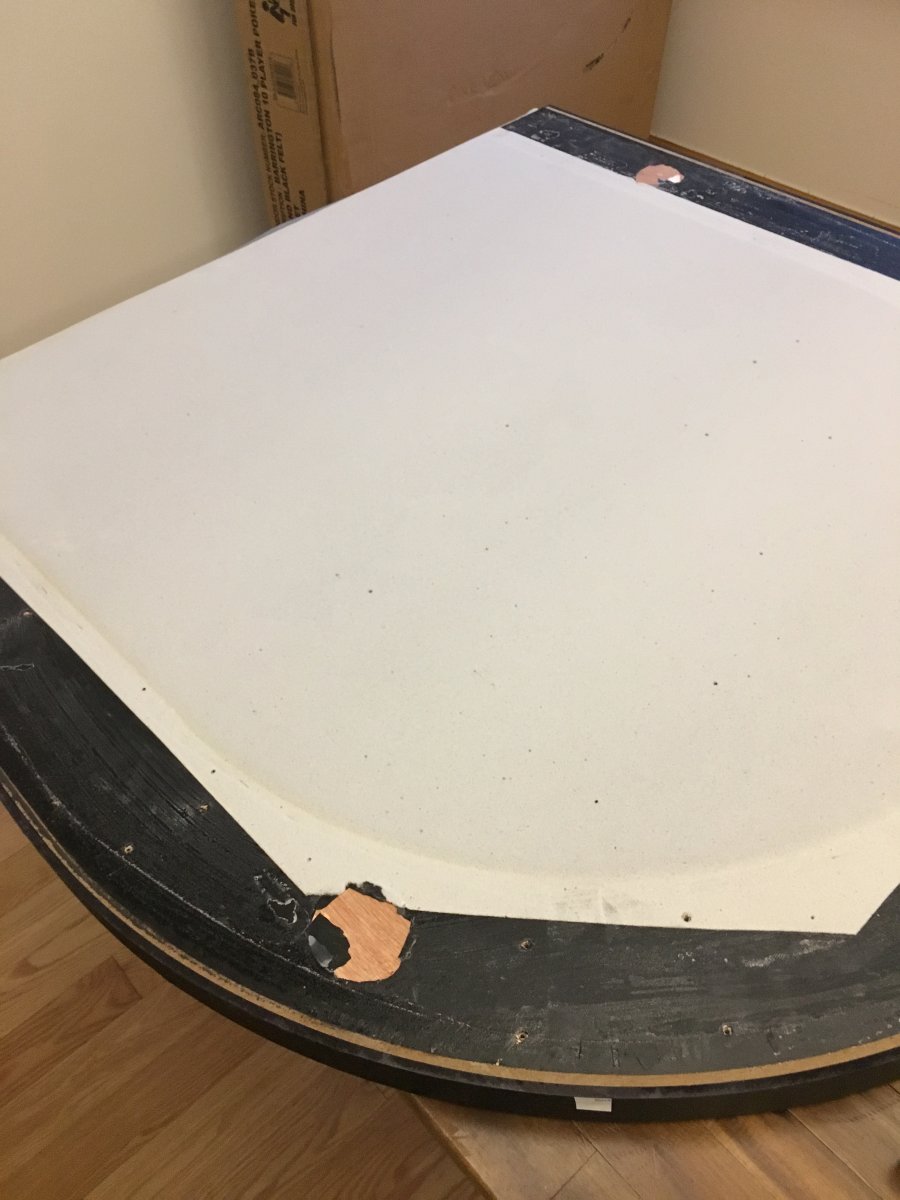 11) Cut your felt. I used Suited cloth from amazon which was fine for me. I trimmed it to just larger than the table overall first, used clamps to hold it tight across the foam, then stapled. Take your time and you will be fine. I then trimmed the cloth again after stapling so it was smaller than the rails and would be hidden suitably. 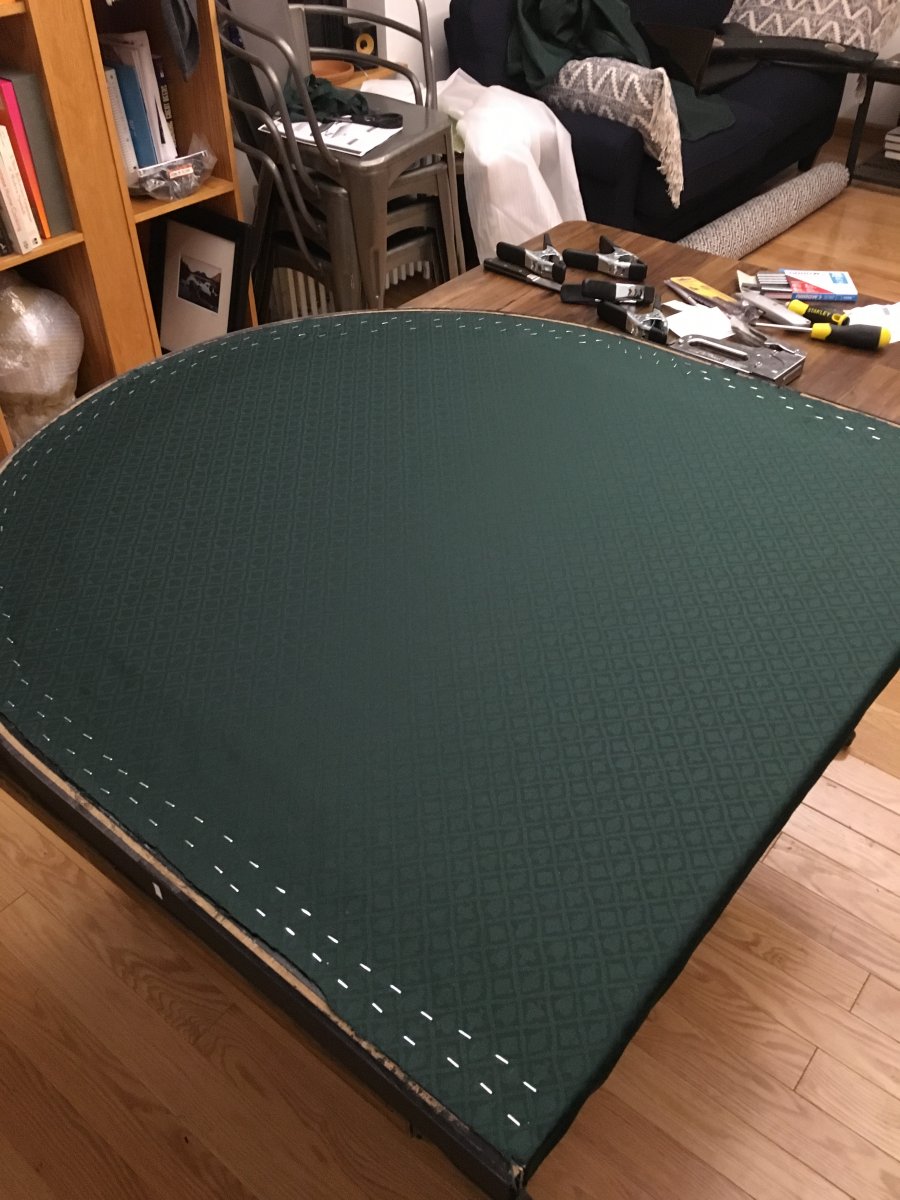 12) Clamp the underside and staple. I clamped at the indented hinge points to ensure i didnt staple there, and thus would know where the hinges would need to go and where i needed to cut the cloth later... 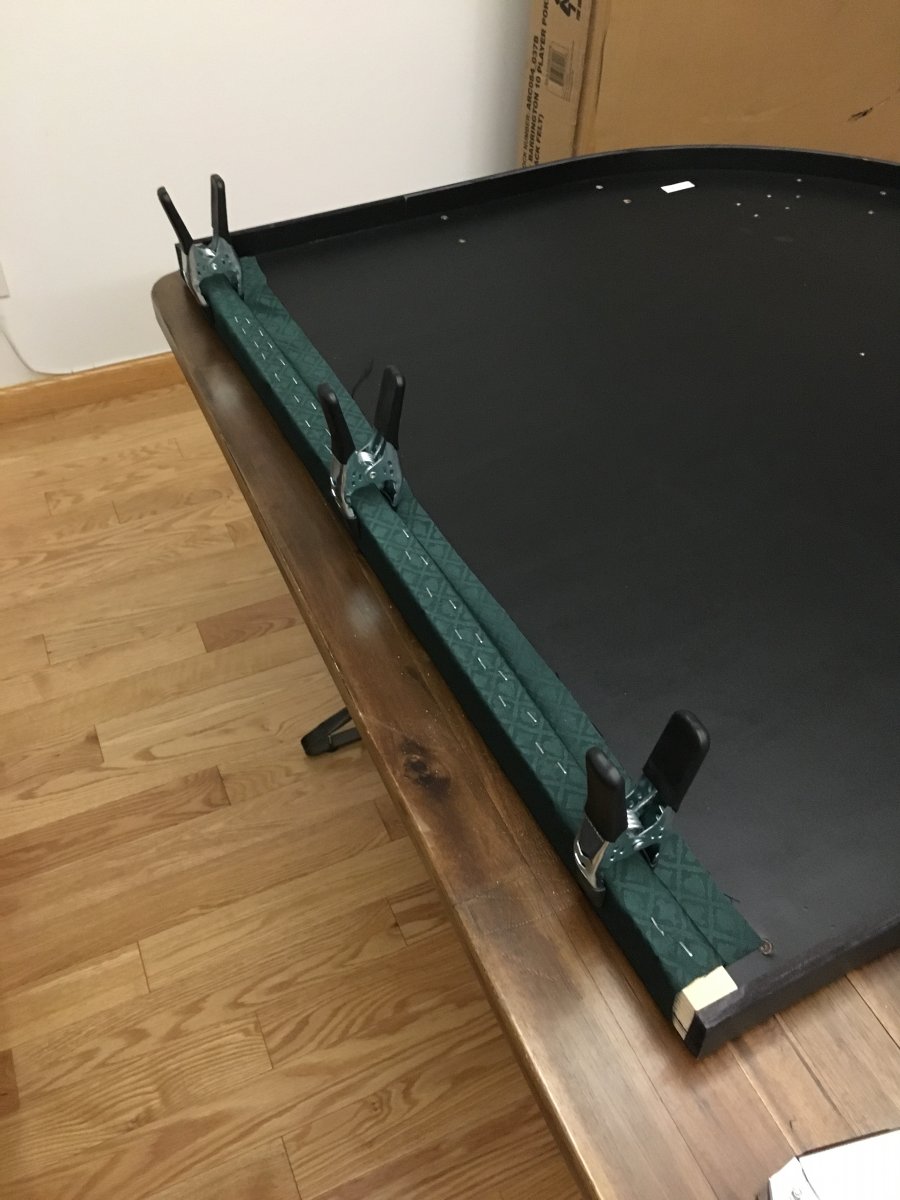 13) Reattach the rails. I would advise that you actually place all the rails under the table section in order to line them all up, and then screw one in each at a time. It is vital you put some pressure down on the table as you screw, otherwise you will end up with a gap between the table and the rail where the screw pushed the rail up. I had to redo a rail because of this. 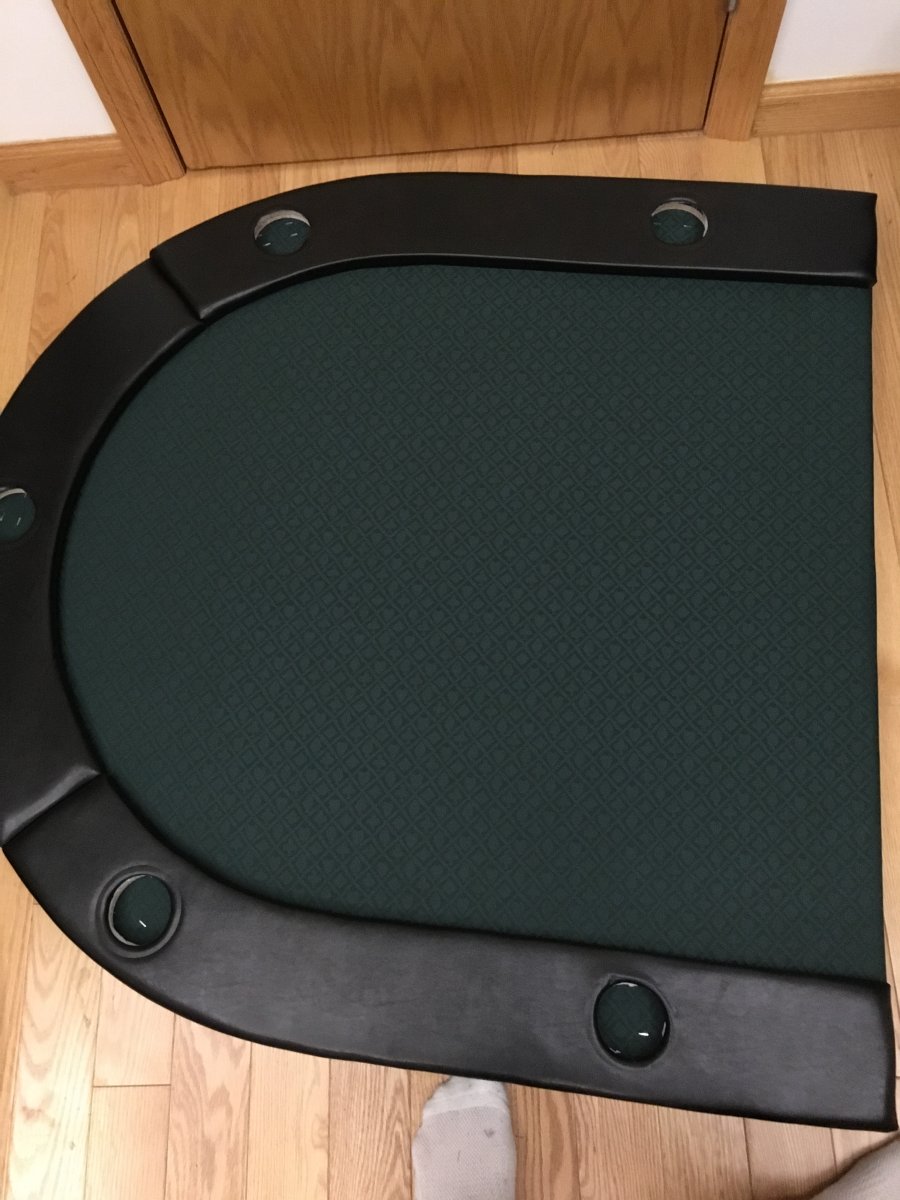 14) Reattach the two table sections together via the hinges. I think my hinges were pretty poorly screwed originally, so this was a real pain for me. Some of the screws are at an angle, some took a lot of work to get back in and one is in fact missing. Clamps are real important here in my opinion... note the areas of cloth i have cut out deliberately, rather than screwing through the felt... 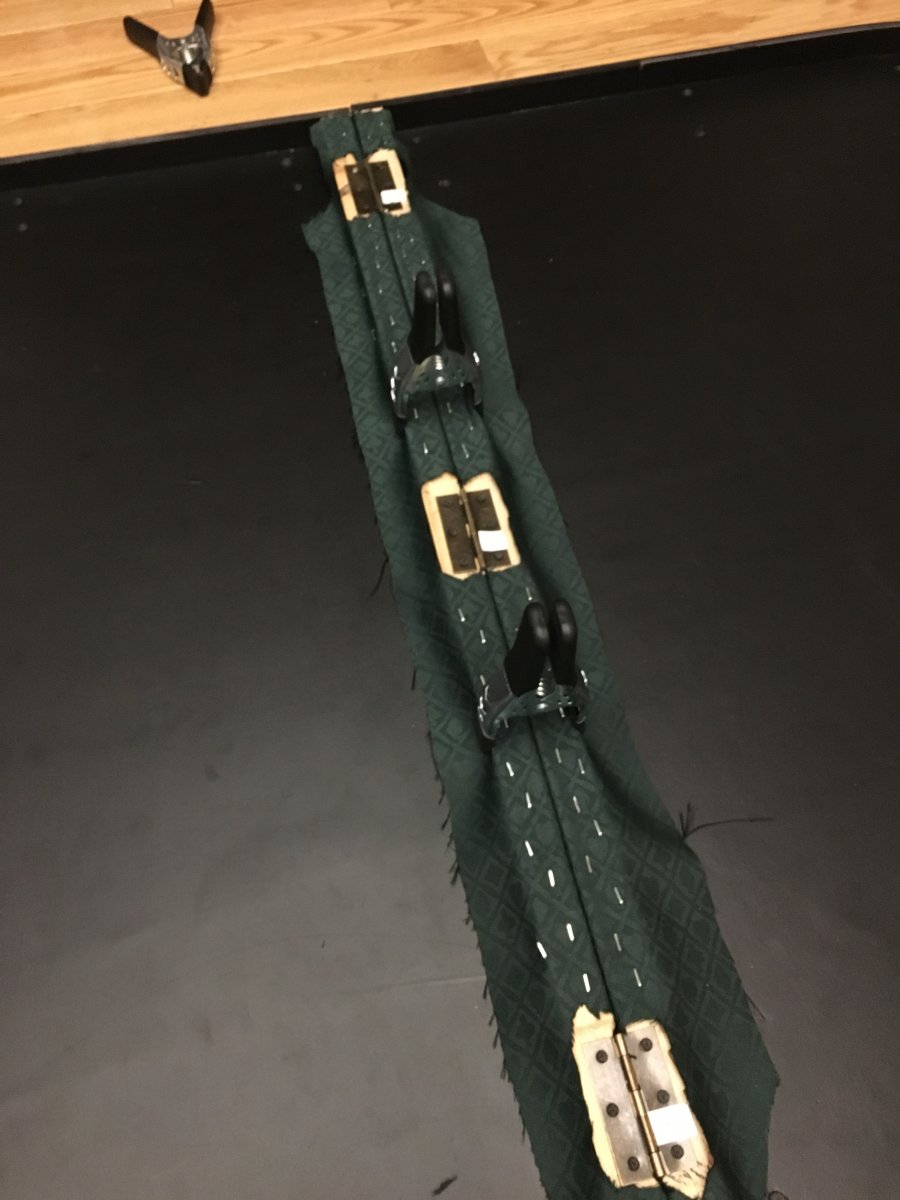 15) Lay the legs back on as we took them off previously. Your labels from before should help. Lightly screw down the central supporting leg sections first before the outer leg sections. This allows you flex on moving the outer leg sections a little and also tensing the metal cable suitably. This was a bit fiddly, honestly doing this with help may have been easier... 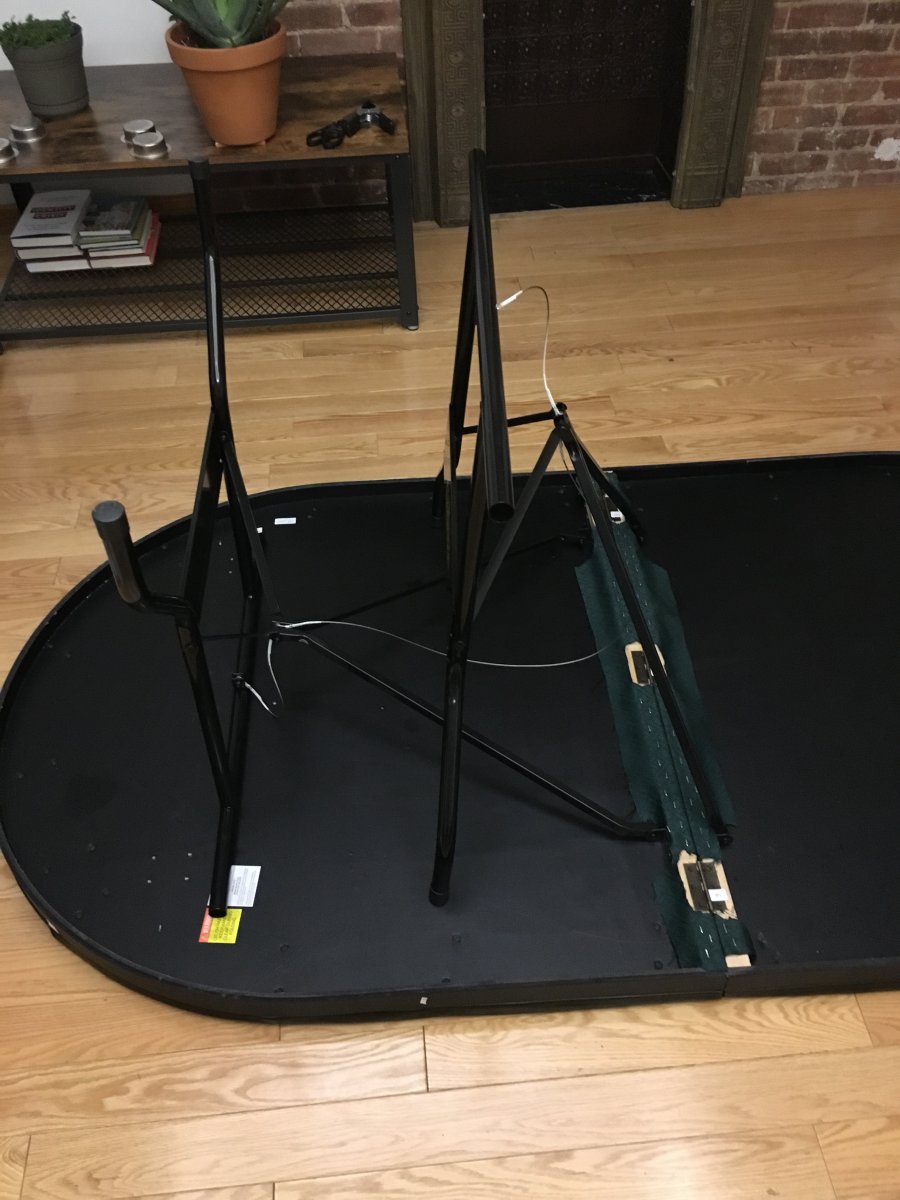 16) Admire your work, your success and look forward to planning your next game! 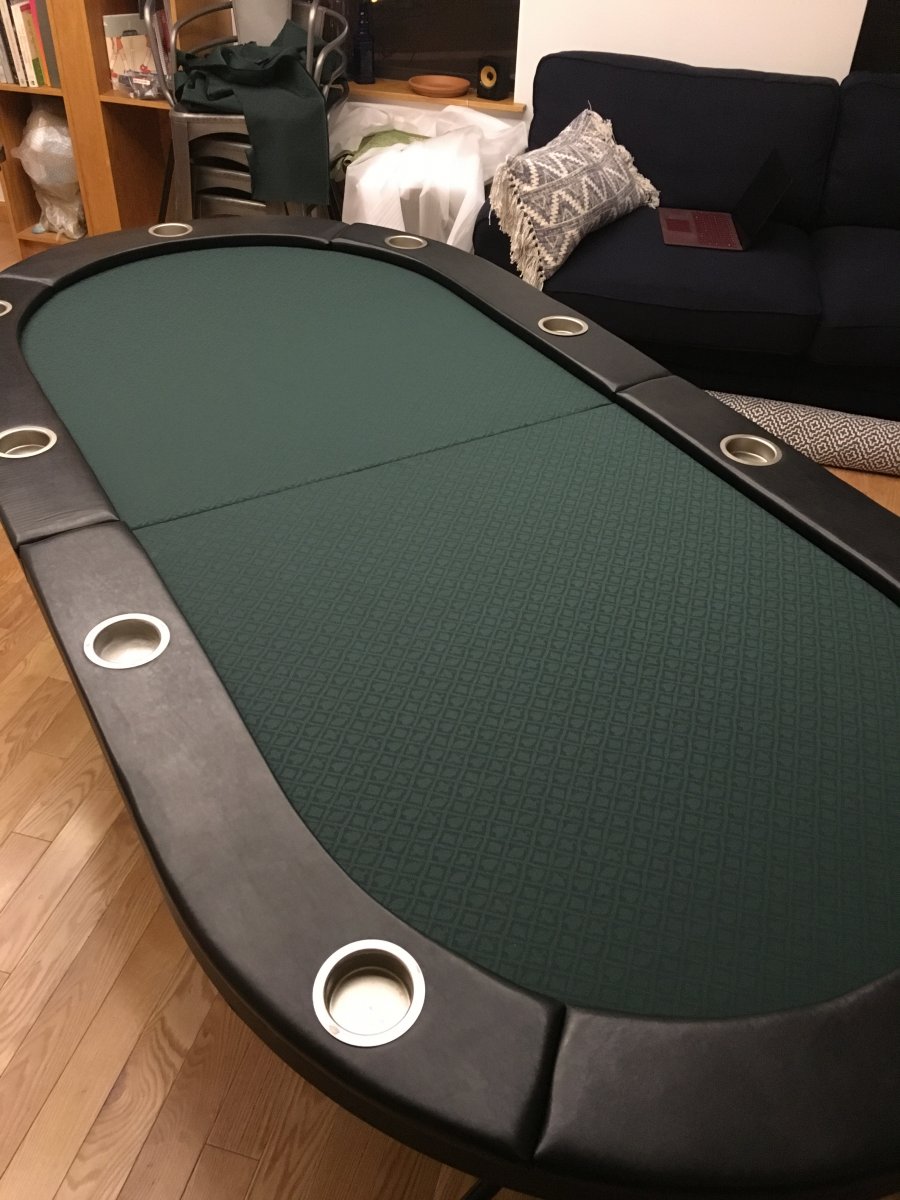 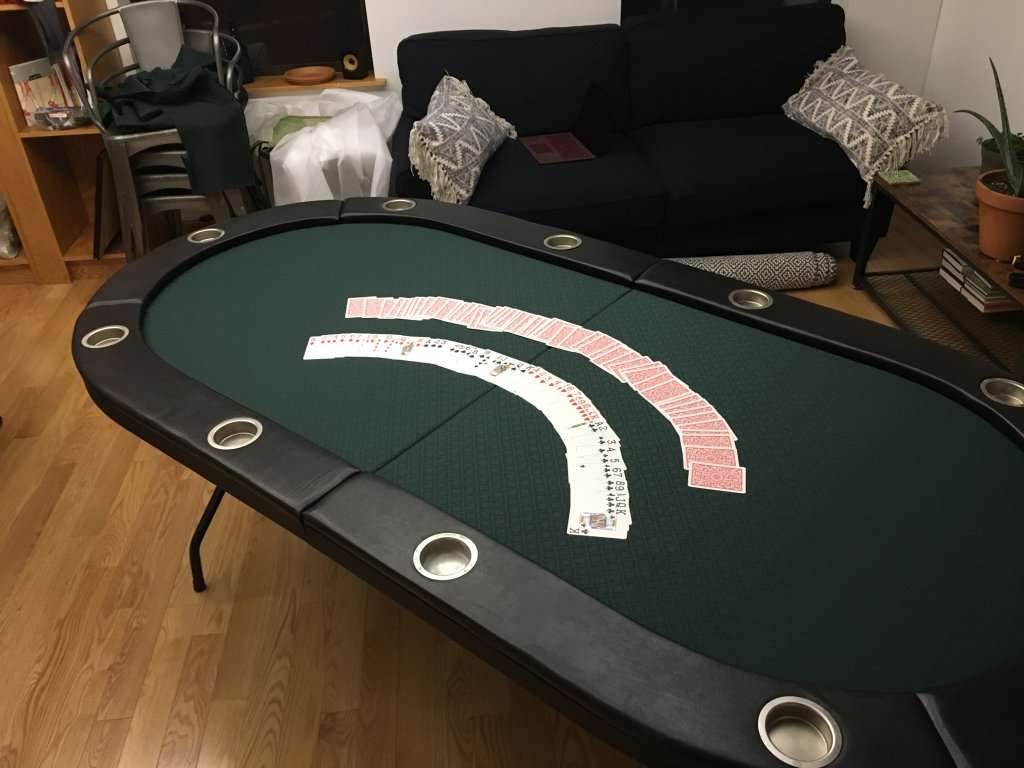 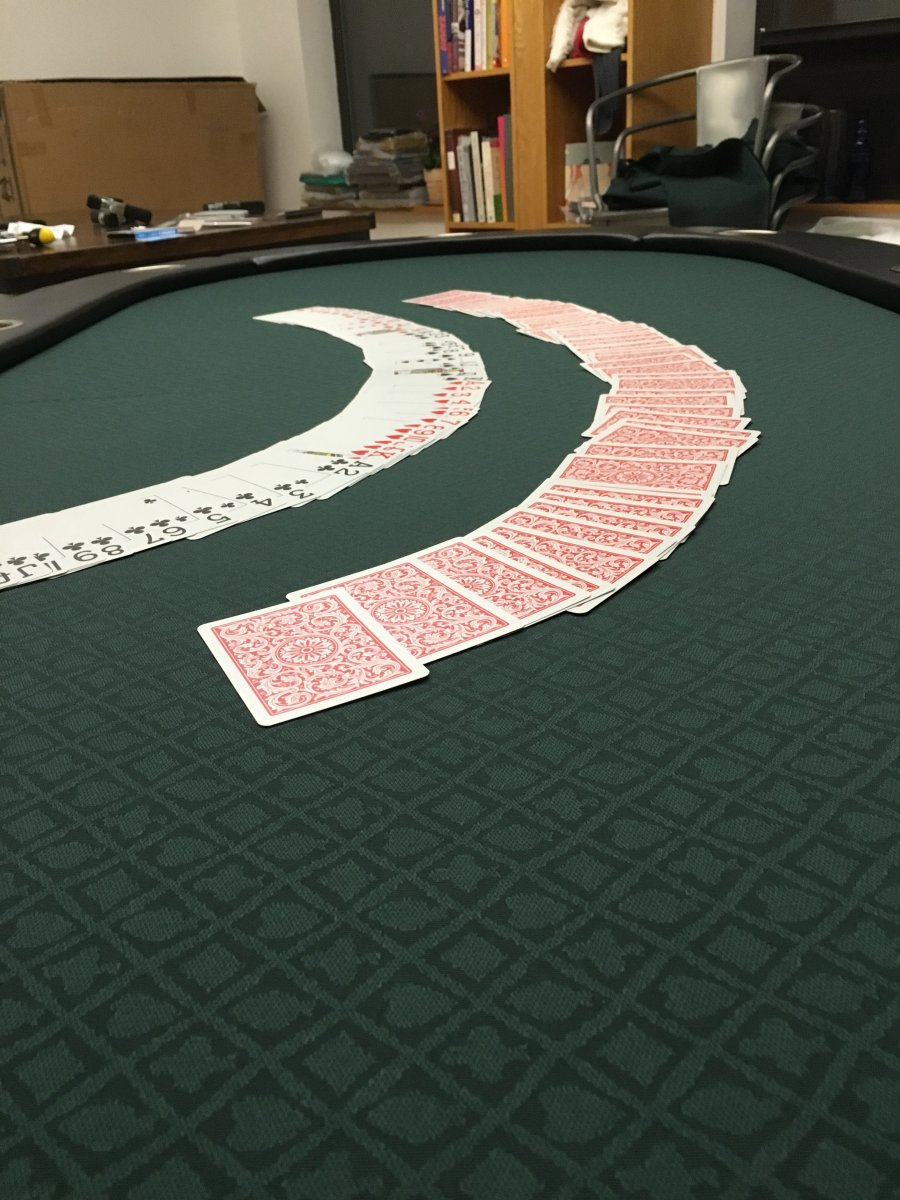 Honestly, i managed to do this in an apartment in New York City with pretty much the most rudimentary skills and tools possible. I think anyone with a modicum of room and a good power screwdriver should be able to. However, I would advise you take your time and plan your steps. Hopefully this guide helps!

Any questions lets me know!

nice writeup! and yeah, I also lost a screw in the process

I didnt lose a screw, it just would not screw in more than halfway! Like i said, think my hinges were pretty poorly screwed in originally tbh...

Weren't these on sale for $99 last black friday? Looks like wally world has them for 156 shipped currently. I need a new table since I sold mine before the move. I'm tempted to get one just as a temp table until I settle. I guess I need to get some new friends first, though!

dew4au said:
Weren't these on sale for $99 last black friday? Looks like wally world has them for 156 shipped currently. I need a new table since I sold mine before the move. I'm tempted to get one just as a temp table until I settle. I guess I need to get some new friends first, though!

Beakertwang said:
I was waiting them to go on another big sale, and now they’re up to $189.99.

Really think we need to stop price checking everyday for a month.

Has anyone added better cup holders to one of these yet?

MG20 said:
Has anyone added better cup holders to one of these yet?
Click to expand...

Pro tip - instead of changing the cupholders, I simply forced everybody to bring cans of beer - so much less likely to topple over than bottles and fill the holders quite well!

I’m having trouble removing my cup holders. I don’t want to yank on them and rip the vinyl. I’ve managed to get a couple out but they sure did use a liberal amount of glue. Any tips?
J

Anyone here have SSC in platinum that they've done?? Would like to see the whole table in that color.

Edit: I actually found Reverse Platinum SSC that looks awesome. Anyone ever order from this company??

Well, I received one for my birthday, which I nagged her to open early

Glad I did because I wanted to change the felt before my first home game. My wife was originally a little miffed that I wanted to change the cloth so soon, and worried about what it would look like. But I assured her that it was the norm, hahah. I ordered samples from YAT and wasn't really sold on any of them. Then I found the reverse platinum SSC from Texas Poker Supply. It's awesome. The pictures don't even do it justice. It looks so great in person. My wife was actually really happy the way it turned out. It really does look like a much better table now. The wife and I have been playing heads up on it for the past couple of nights. Im stoked to get an actual game going on it.

The process wasn't really that bad. Just time consuming. All in I would say about 4 hours. And I was mostly working by myself. Just made sure to put everything in one area. The legs aren't bad, just make sure you pay attention to how they come off. The hardest part I would say is lining up the fabric between the two halves. Clamps really came in handy as well. I used 8 per side. Maybe a bit overkill, but it definitely helped. And the glued cupholders. Christ, they used a lot, at least on my table. I attempted to pry up, but felt like they were going to come through the rail. So I used a hairdryer like someone suggested and they popped up very quickly. Like I said, really very easy. Just give yourself enough time and space.

Here are some pics. First ones are in the daytime light. Definitely pops. The others are after my wife played around with staging and whatnot. Haha. She was having too much fun. Enjoy!!

Edit: Can only add a couple. Not sure why, but I will work on it. 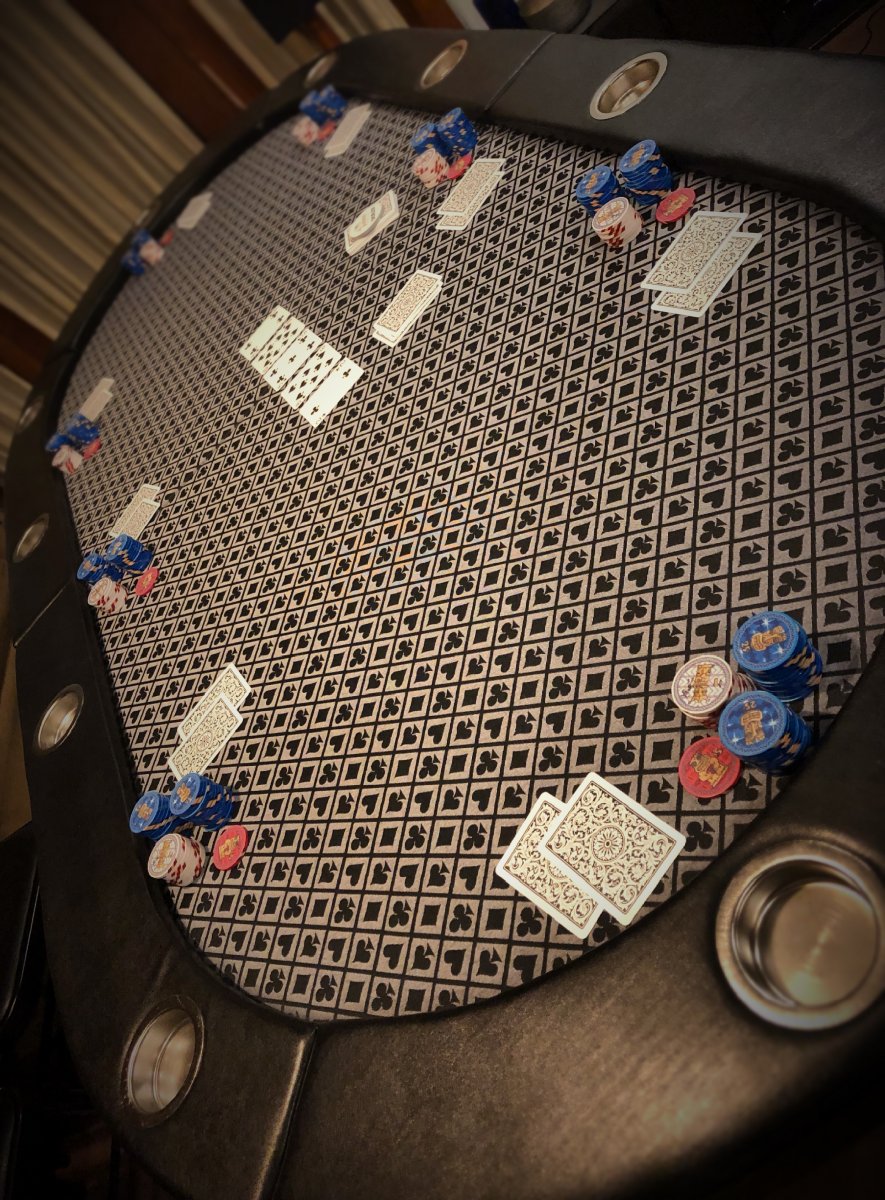 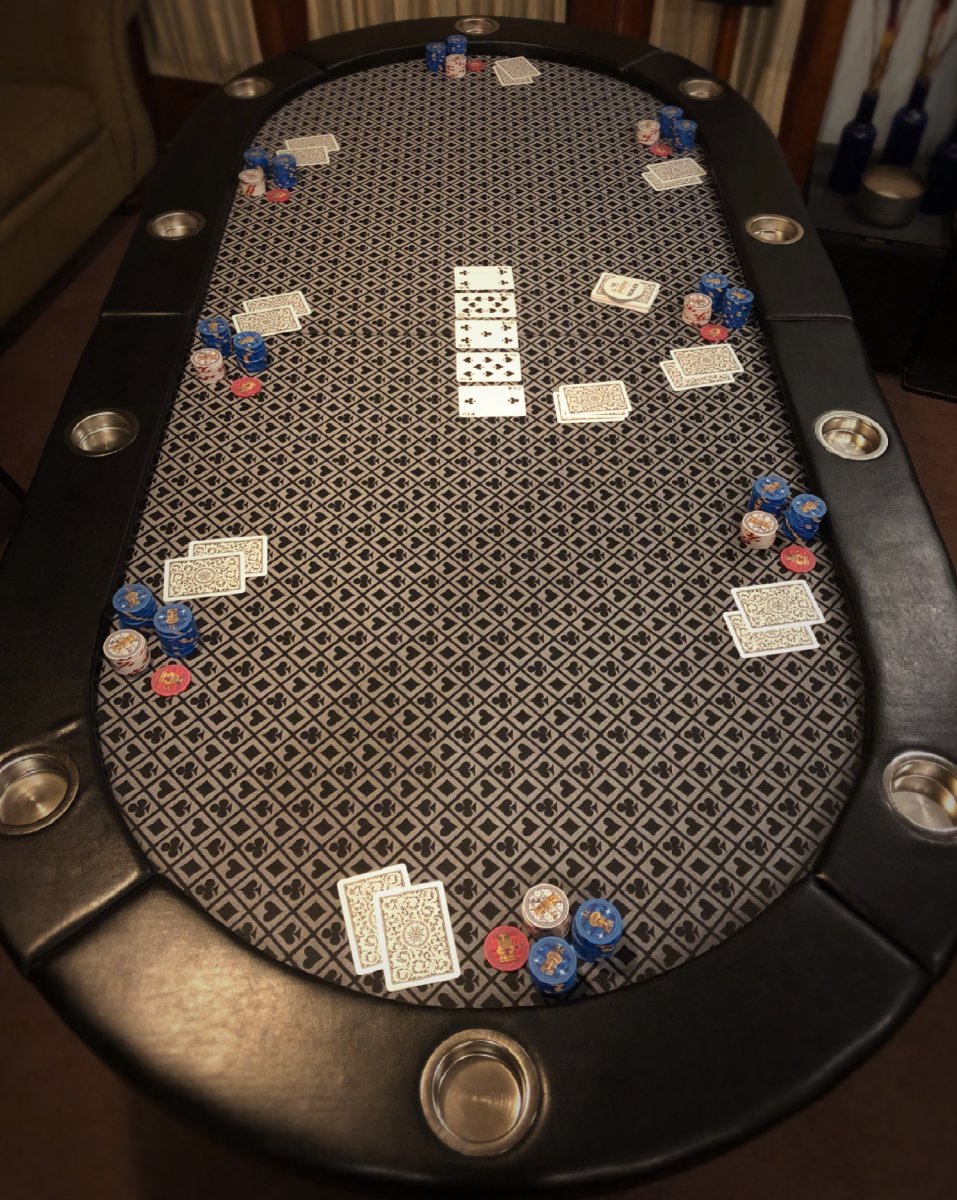 Anyone have any advice on how to purchase these at discounted prices? Does their pricing fluctuate throughout the year? Are they normally marked down on Black Friday? Any tips? Seems like a fun project for the right price. Thanks!

Sprinsd said:
Anyone have any advice on how to purchase these at discounted prices? Does their pricing fluctuate throughout the year? Are they normally marked down on Black Friday? Any tips? Seems like a fun project for the right price. Thanks!
Click to expand...

Sprinsd said:
Anyone have any advice on how to purchase these at discounted prices? Does their pricing fluctuate throughout the year? Are they normally marked down on Black Friday? Any tips? Seems like a fun project for the right price. Thanks!
Click to expand...

Remember to look at all 3 versions (brown, blue, and ESPN). ESPN w/ light was the cheapest one a few months ago even though it was the most expensive for a while.

As @Forty4 has mentioned, the more we look them up, the higher the price goes.
C

Wish they made a 96 inch version of this.

ChipTalker said:
Wish they made a 96 inch version of this.
Click to expand...

too big to carry at least for me and I'm still young and in good shape! the current version is already a pain in the ass to move even across the room folded
C

Not harder to move and store my 96 that does not fold in half ...

ChipTalker said:
Not harder to move and store my 96 that does not fold in half ...
Click to expand...

I guess you need to start a company and make 96" folding tables !

Thank you all for the information. I will stop googling so price isn’t inflated lol. If anyone sees a great deal please post!!

Keep checking. I got the espn table a few months ago for $129 from Walmart

Does anyone know if this model is as sturdy as the straight poker tables that are more? I'm considering getting this and probably just chucking the other tops. (Or maybe giving them away as portable table toppers?)

There is one for sale in the town right next to me, brand new in box, for $55. Seems like a no-brainer instant buy, right?

Edit: Looks like this table is quite a bit smaller than the normal 10-player version.

Deleting my post. Its not on the right thread about the table.
Last edited: Mar 9, 2019
A

Can someone give me the total thickness of the 10 man table when it’s folded up. Looking to see if this is going to fit somewhere for storage.

Altheman003 said:
Can someone give me the total thickness of the 10 man table when it’s folded up. Looking to see if this is going to fit somewhere for storage. 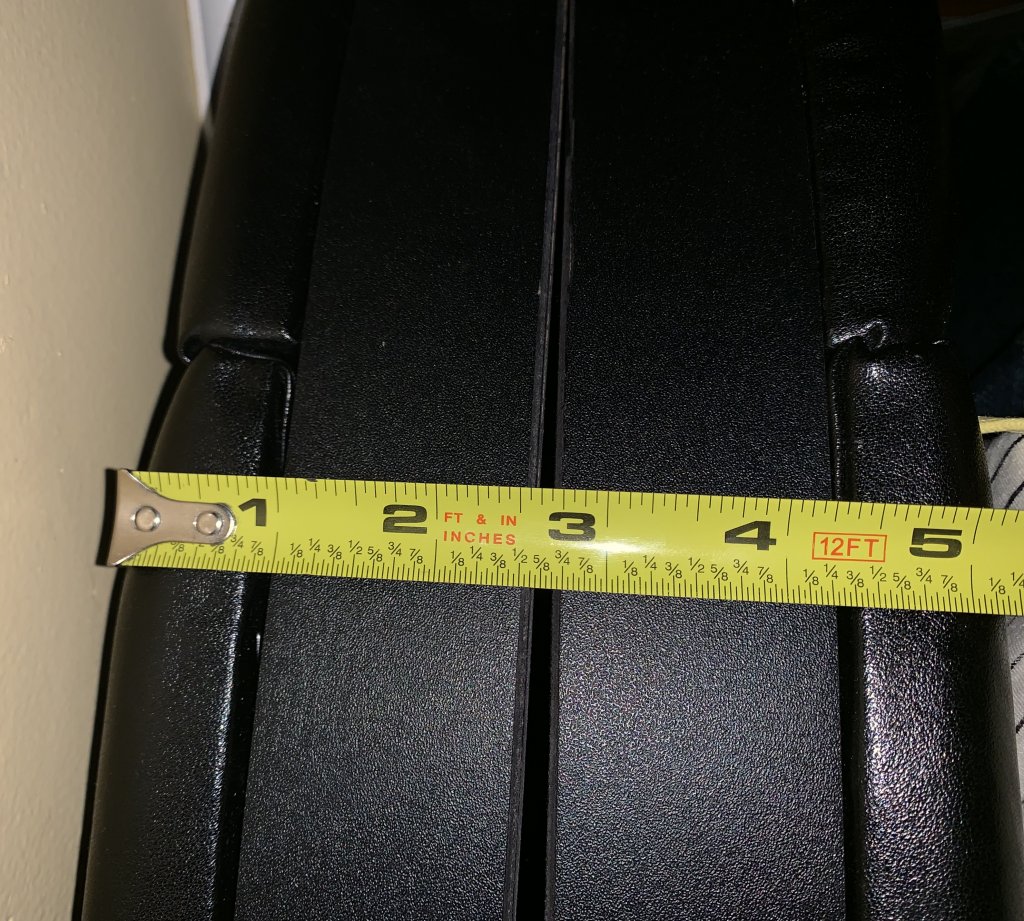 Thanks bro, appreciate it
You must log in or register to reply here.
Top Bottom