Just looking for input on how y'all do your turbo tourneys.

How long between blind increases?

What are your starting stacks?

Roughly how many folks participate in your turbos, and how long do they generally last?

Our Super Turbo Tournament was played with the following settings

Take the structur from Excalibur Las Vegas with 4'000 Chips

We found that anything under 50 BB for starting stack was an immediate shove-fest, so i'm not a fan of Pinball's structure (20 BB starting stacks.)
Even at 50 BB, you have to double up to get a normal full starting stack... and the blinds will keep up with you.

At our last game, with 50BB starting stacks, we had a 3-way all-in on our first hand. 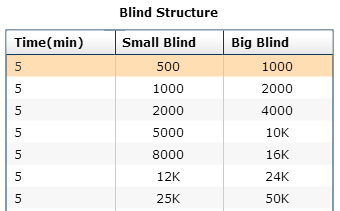 Target is to run it about 30 minutes and either start another, or return to cash. With 9 players, there's just over 450K in bank, so after 30 minutes, the blinds of 25k/50k are just over 15% of the total, which ensures the game will end quickly if it's still running.

When short-handed (4 or 5 players), I can double the starting stacks, so everyone starts with 100 BB. That gives everyone more breathing room in the early rounds, but the blinds still get up to 15% of the total at 30 minutes, so the end will still come on time.

I thought I would hate such rapid blind increases, but I actually love it, and so does the whole table. Keeping a big clock on screen for everyone to see, with the next blind level showing, helps.

With a 5-minute level and a full table, you will not all pay the smallest blind, first time out - so it's important to draw for first button, if not for all positions.

I'm considering whether to add a rebuy option in the first 15 minutes for T50,000... the game would still end at about the same time. In the Nine Dragon set, I only have chips for 10 regular buy-ins, but I can make an 11th using a spare pair of Gold Dragons...

I'm strongly considering doubling my count of T1000 and adding on 90 T5000 so that I can provide T100,500 starting stacks, with a 100 BB starting stack. I may experiment with a Turbo that starting count using other chips. That would also give me a neat T1,000,000 heads-up set.

Also, since the T500 gets messy later in the game (all-ins with few of them around), I'm considering whether it isn't better to start without it... and just play the first level of blinds as 0/1000. Starting at 1000/2000 is not an option with 50K stacks for me, because that's just 25 BB. We like the time pressure of the rapidly chiming tournament clock, but still like to be able to play poker.

I think that's what I'm going to try next.

Last week we did T3k - 8/8/4 - with 10 minute levels and that ended up going about 90-100 minutes with 8 people starting. Part of the length was because of the players involved, but part was definitely attributable to chip count.

If you wanna go really turbo, you could try the 50Fifty format, where you play until half the players are left and they all double their buy-in.
If you have an odd number of players the last elimination wins his buy-in back.

These things are great fun, are over quickly, and give you a great opportunity to do a whole bunch in one evening.

Interesting format, Marvelous... The whole thing is a bubble battle!

I'm also amused by the thought of the table all focused on knocking out the remaining short stack, so they can all win... Only for the short attack to double up, and for all eyes to look at the next short stack...