Here it is! Thanks to MoscowRadio/Palo Verde Poker Supplies for gettin' it done, and for offering an alternative solution when we came upon a challenge with the cup holders.

It was absolutely my pleasure Scott! I really enjoyed building this table. May it bring you lots of run good!

What was the cup solution? Beer helmuts? I don't see anything!

But he needs to work on his card-spreading skills...

Pics of cup holders please and grats on the sweet new table.

Out to dinner at the moment. Solution was end tables with holes drilled in them for drop-in metal drink holders.

Good choice, I hate under the table holders, love side tables, better than beer helmets.

Very sweet looking table. Pics of the side tabkes? And what is the playing surface?

Playing surface is non-suited speed cloth (non-suited at my request).

But he needs to work on his card-spreading skills...
Click to expand...

My card handling admittedly and obviously needs (a lot of) work. Part of the purpose for this table is to serve as a practice table for cheque handling/dealing. We have a casino opening about 8 miles south of me by the end of the year, so I may do some dealing on the side. We'll see.


slisk250 said:
Good choice, I hate under the table holders, love side tables, better than beer helmets.
Click to expand...

I'm a fan of a beer helmet or two as long as someone not named me is wearing them and they don't block my view of the television.

Slide-under cup holders were actually my preference and I picked up some from Spinetti's during my last Vegas trip, but...by the time I picked up the table, the rails were battened down too tightly to allow for them (I could potentially force them, but they certainly wouldn't lay flat. There was also a very slight issue w/one of the table legs not being able to fold down properly after we opened them once. The leg issue required a very simple, slight adjustment and all was well. Accommodating the slide-under cup holders would have required more than a simple adjustment to the railing. James proactively had the tables ready to go, though, offering a set of four w/more than enough drop-in drink holders ready to go and free of charge. The tables aren't anything fancy - just a basic black set of wood end tables w/holes drilled into them for the drink holders & matching rack - but they were offered free of charge and certainly provide more utility than just holding drinks for poker. That was more than an acceptable arrangement as far as I was concerned.

What you don't see in the picture is James' customer service - a dying art in most places, but not with Palo Verde Poker Supplies! He kept in communication with me through every step of the process, being sure to note all the details of my request, and even asking for input on smaller details I hadn't considered (note the rounded inside corners of the railing at the dealer station vs. squared corners). After noting what I wanted - and being patient with me as I figured out what the heck I wanted - he quoted me a more than fair price and delivered the product in a timely manner. And, as far as the cup holder/railing thing goes, he was up front with it and had proactively offered a solution rather trying to hide it and wait for me to get it across town before realizing there was an issue.

Besides that, one of the details I had hoped for was a betting line. Unfortunately that isn't normally an option without getting the fabric dyed or buying a pre-dyed layout, either of which would have run the cost up by a fair percentage. He researched options to add the line himself and presented all the options to me, at which point I ultimately decided leaving it plain for this particular table is perfectly fine.

For the chairs, I went with these...

Once they arrive, I'll set everything up and take some pics of the entire layout w/some different chips. Just got some of the WSOP tourney ceramic replicas that are begging to be photog'd!

Whenever I decide to upgrade my table (I initially typed "If", but who am I kidding), I'll probably use TChan's gaming suede with a betting line and my company's logo dyed into it. Not sure what I'll do re: cupholders for the next table - slide under, in-rail, or side tables - but what I do know is I wouldn't hesitate to work with James/Palo Verde again.
M

Wow. Thanks so much for the wonderfully kind words Scott. It was great to meet you and I look forward to seeing you again when the cards are flying!

That dog is amazing! What skillz! How long to teach him that trick? 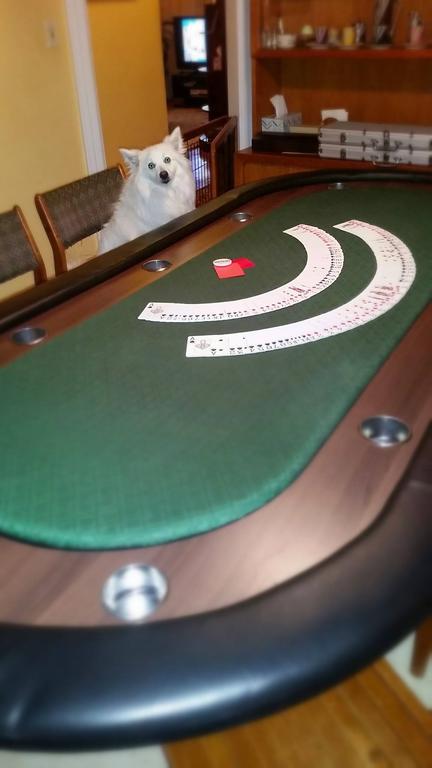 BGinGA said:
That dog is amazing! What skillz! How long to teach him that trick?
Click to expand...

I don't know, she picked it up from my players. Unfortunately, she also got bad poker habits... She'll chase anything!

Here's some more photos, this time w/chairs and tables present, and with the WSOP ceramic replicas (great chips!)...

Awesome setup and room you got there. Sure beats my unfinished basement look. Well done.

Very nice, I was looking at building drink treys, it clears the table of any possible spills, I like them...

chipjoker said:
Very nice, I was looking at building drink treys, it clears the table of any possible spills, I like them...
Click to expand...

I like the look but I'm not convinced that they would stop spills... I can just imagine players turning back with their drink "oh action on me?" and putting their drink down to look at their cards or something. Or they'd just get sick of turning around all the time. Plus they take up space, and I haven't had any spills yet anyway.

solid table. Well done. Looks easy to play on and best of all.. no racetrack bumbling up my shuffling and all in shoves

Love the whole set up. Awesome!
You must log in or register to reply here.