I've always wanted to have a custom tournament set for my home game. I am sure, like most others, hundreds of iterations and names have been proposed and rejected, as they just don't have that "it" factor. I've toyed with many names and ideas; whether they were family, street name, or what-have-you. I got to the point where my creativity was done, and polled the 100+ players on my distribution list .. and still came up with nothing. One day, it just hit me, and I knew what I wanted. I wanted something that honored my home town, which we are so very fond of. Once I settled on that, I needed a name. Ellicott City was once called Ellicott Mills, due to all of the mills on the river that passed through town. I was thinking about an old mill, but I wanted to find an image from Ellicott Mills in the 1800's, but there was nothing to be found. strike 1. The Railroad industry is also very big around here, with the B&O railroad starting in Maryland and running through Ellicott City. Maybe each chip has a different train, or station. Again, I wanted authenticity, and there isn't much stylistic about the old trains. strike 2. I needed something Maryland/Ellicott City and poker related, and it hit me. A play on words with the SpeakEC. It was perfect. It incorporates the underground game and my home town.

Once the name was finalized, it was time for design. I have my original drawing that I had provided to two designers. The main item on my inlay is the clock that stands at the bottom of Main Street in Ellicott City. The clock, although there are others like it, is a symbol of our town. Ask anyone from the area about the symbols of old Ellicott City, and the clock is tops on the list. It has to be there. As you may, or may not know, our town was devastated by a flood in June 2016. This flood wiped out many of the small business and historic buildings with a vengeance, and devastated the town. The clock was at the bottom of the hill of Main street, and was washed away. The town (and state) came together to clean and repair the city, and it was a beautiful site. The time on the clock on my tournament set represents the time when the State of Emergency was called that evening.

The inlay has the clock as the centerpiece, with some of the old Speakeasy flair to it. It's a rather clean inlay with the clock and the banner (using the yellow color from the MD flag). All of the Maryland flag colors are on the inlay in some way (Red -denomination, Yellow - Banner, Black - text, White - Clock Face).

The chips themselves were mocked roughly 40 times. I was torn between the traditional tournament pattern, in which each chip has the same edge spot, or the different spots with progression. At this time in my chipping journey, every tournament set that I have had, had either no spots or the same spot pattern. I played with the progressions for what seemed like months. I decided that I was going to base some of the chips on my favorite casino chips as well.
The remaining chips:
The Bounties:
For my sets, I always have to have at least one chip with the MD flag colors. In this case, I had originally used a red base with black and canary spots. In some instances, it was mixed with the T1000, but it also has very similar colors to my $5 cash chip. I needed something more unique, and went for an update. The new Bounty has a black base with Retro Red, B. White, and Yellow 3T16 spots. I think it represents the flag perfectly, while also adding a distinct color and pattern to the set.

As a whole, the set now stands at roughly 1900 chips with the following breakdown:
This set now comfortably can run my monthly game of 30+ players (plus rebuys) with starting stacks of 12/12/5/6. While I did just recently add on to the set, I will most likely make 1 more add-on in the coming year (potentially adding another rack of T1000, more T5000, and more T25/100s. 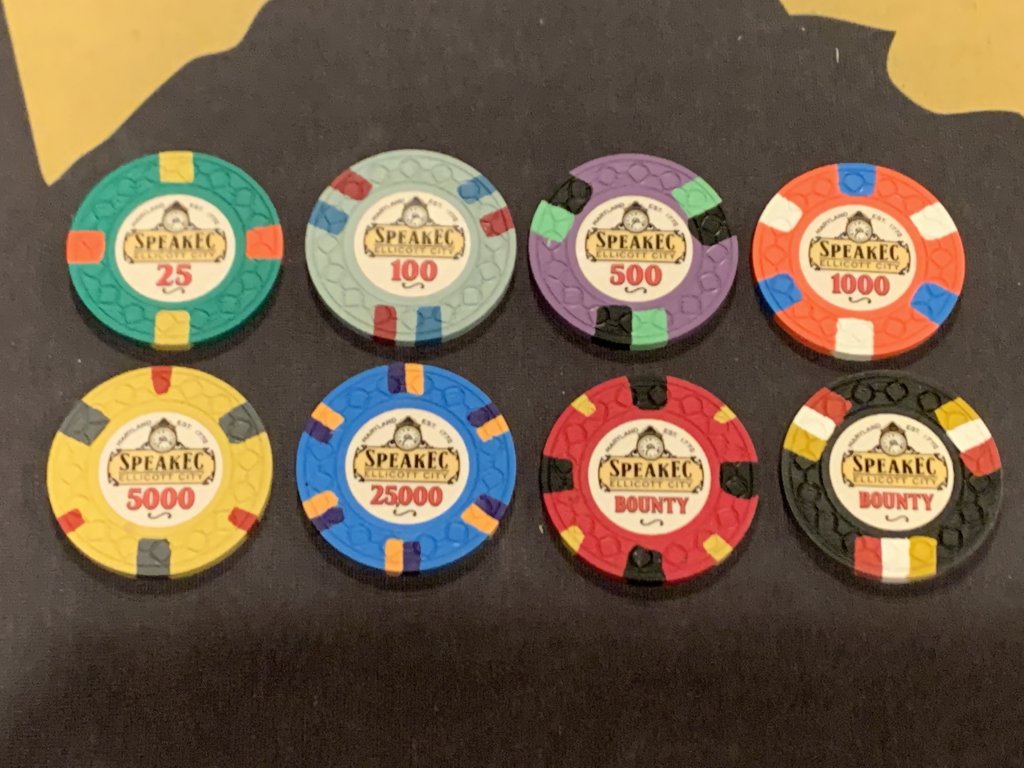 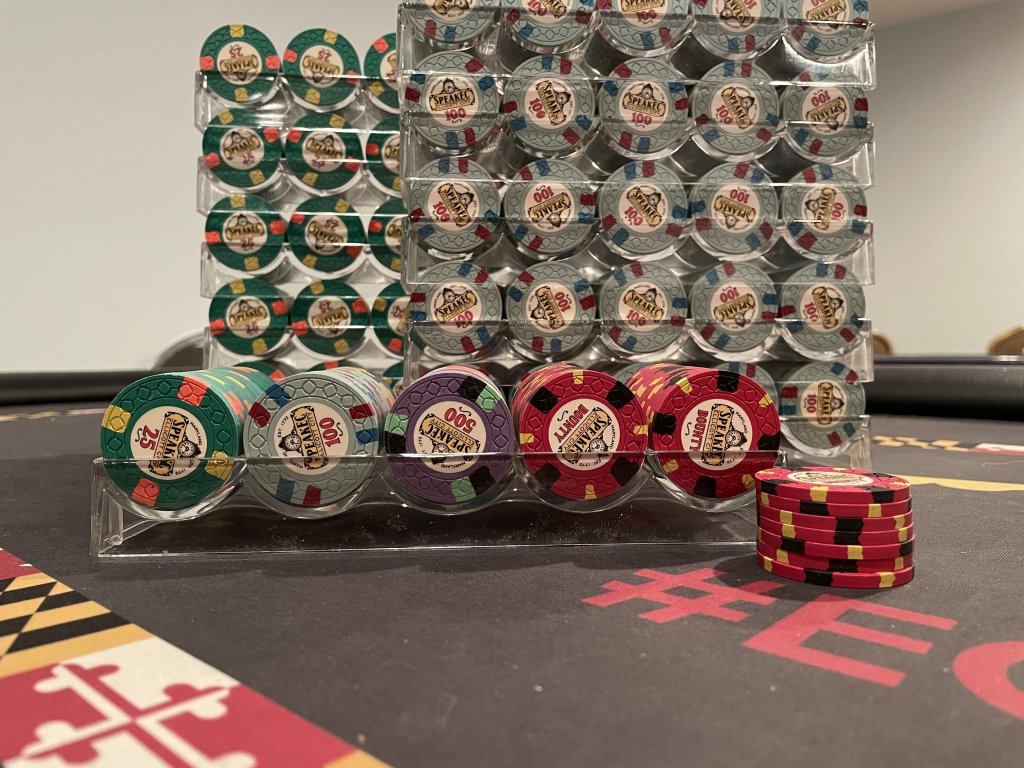 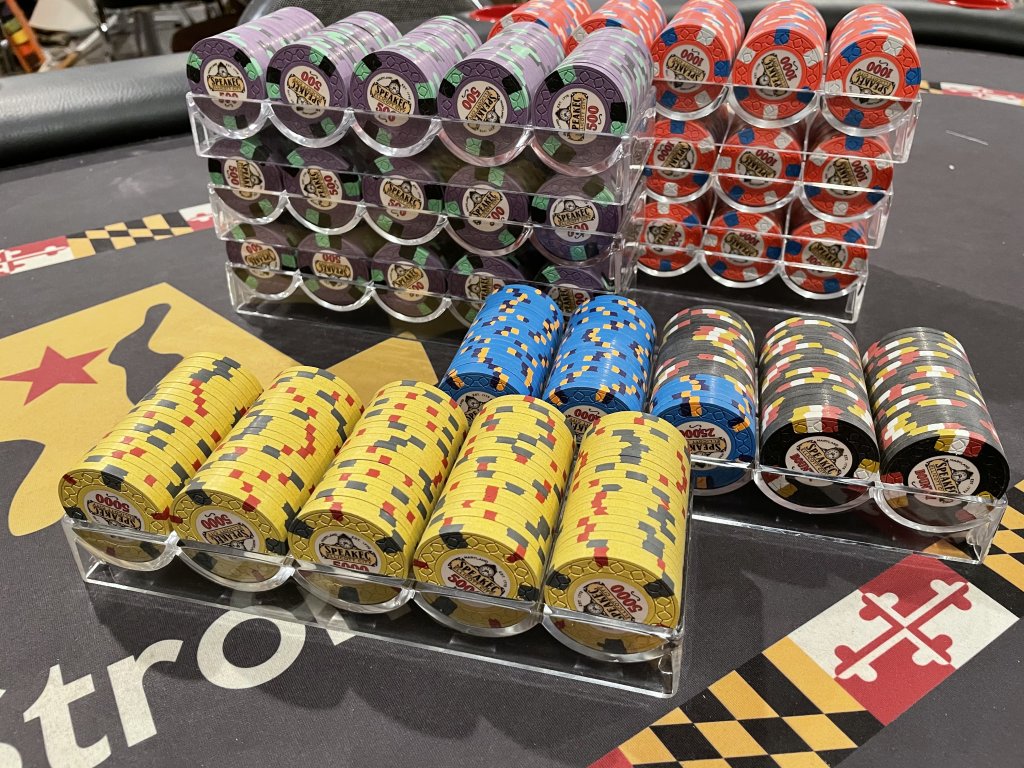 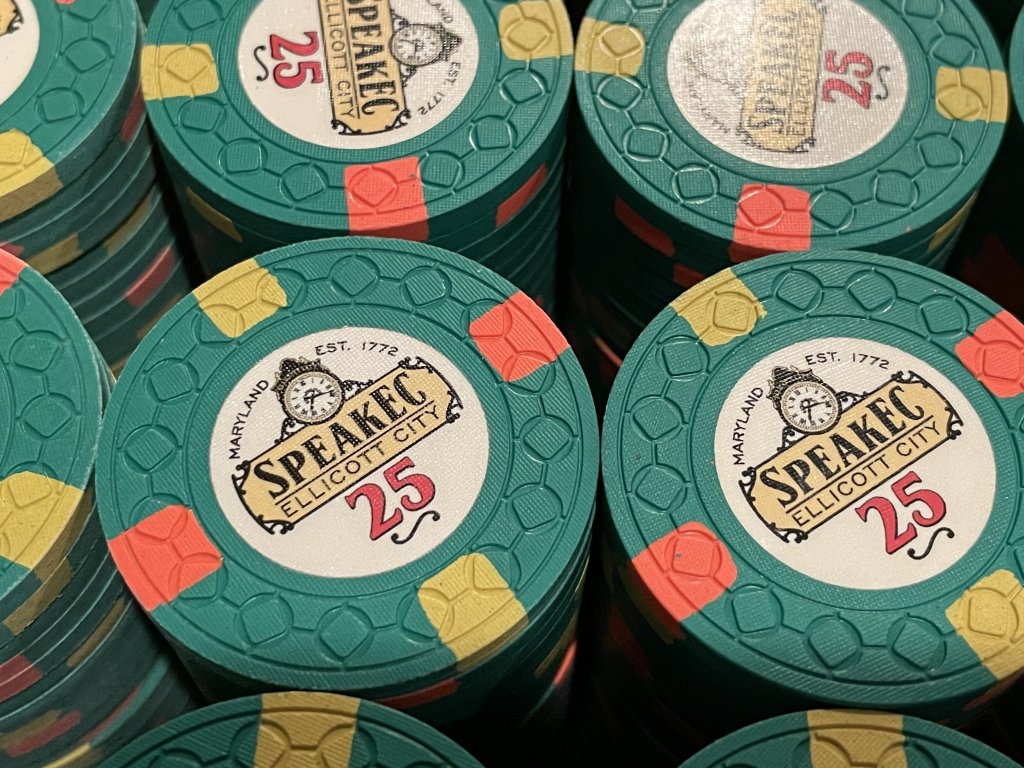 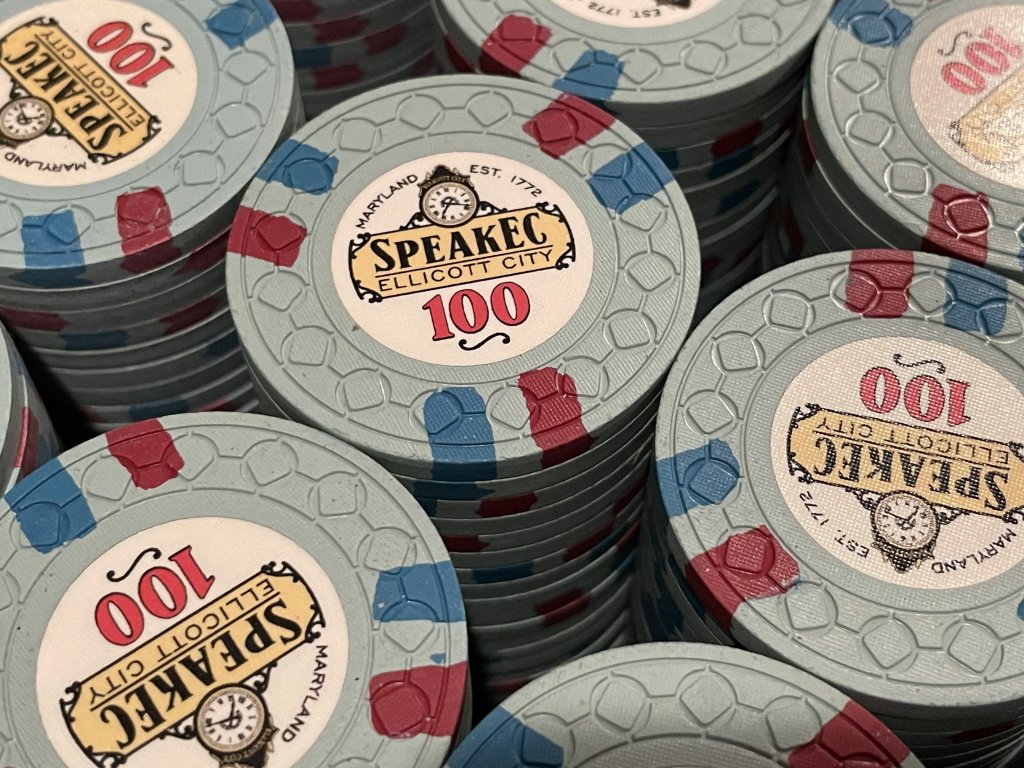 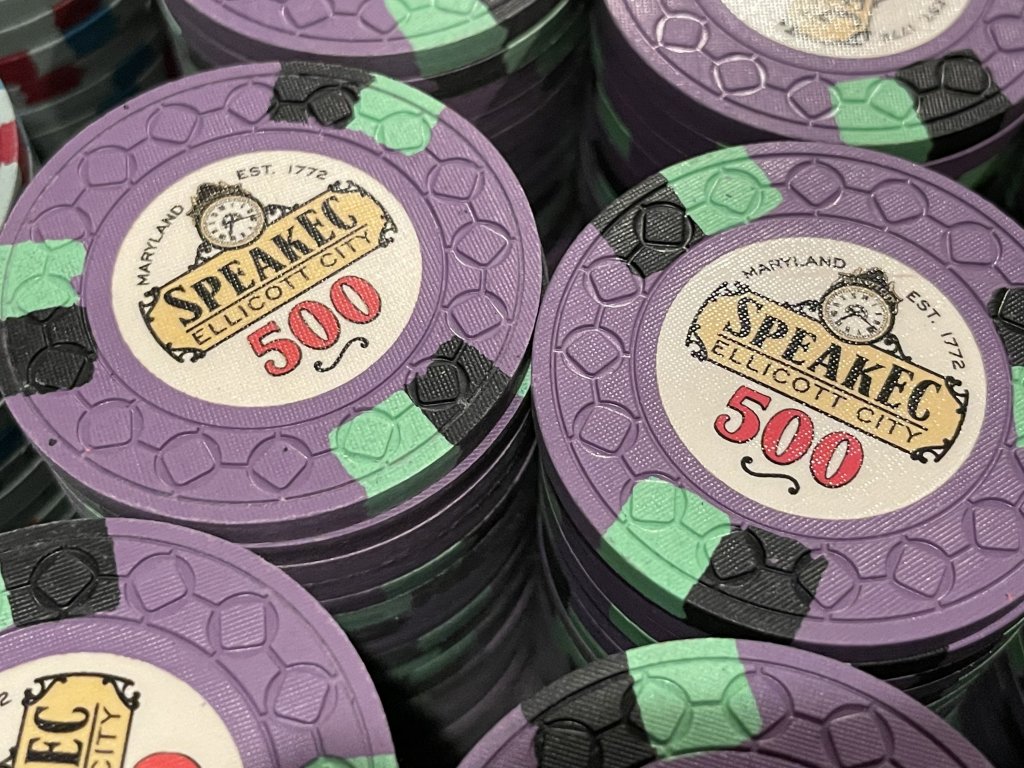 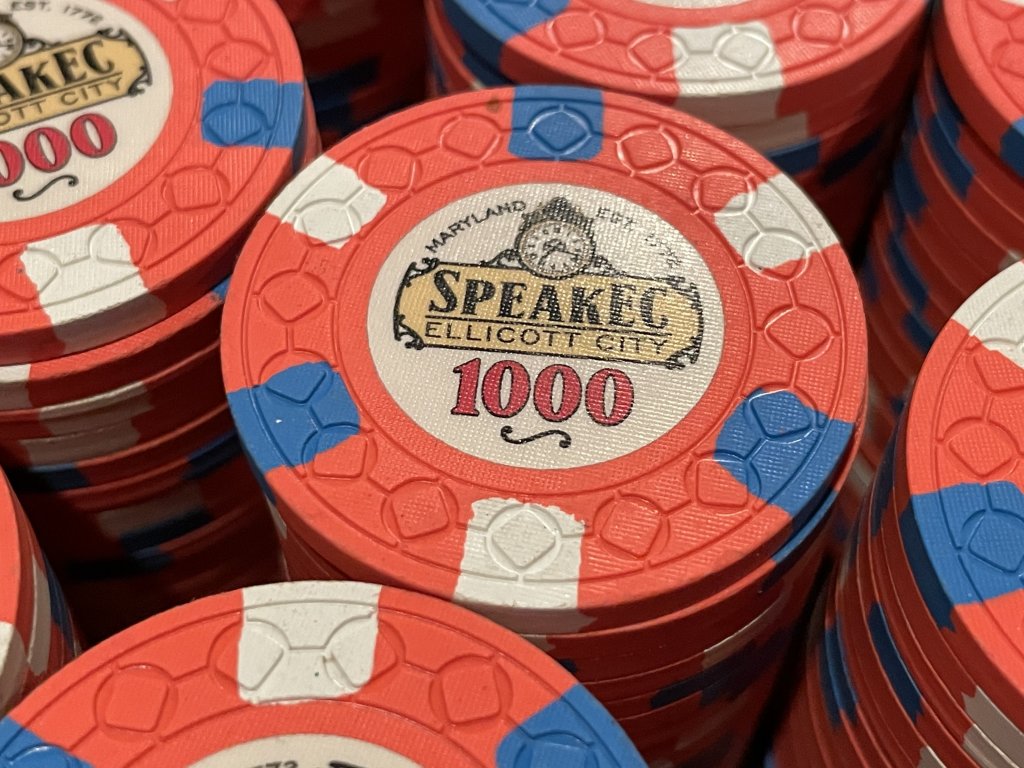 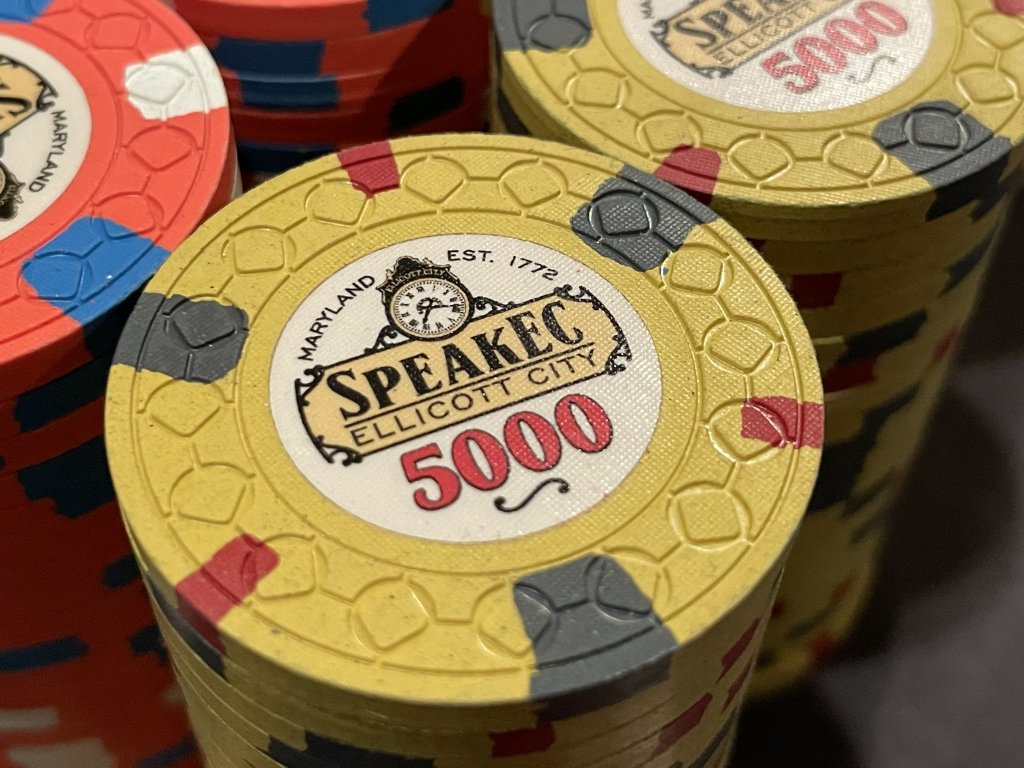 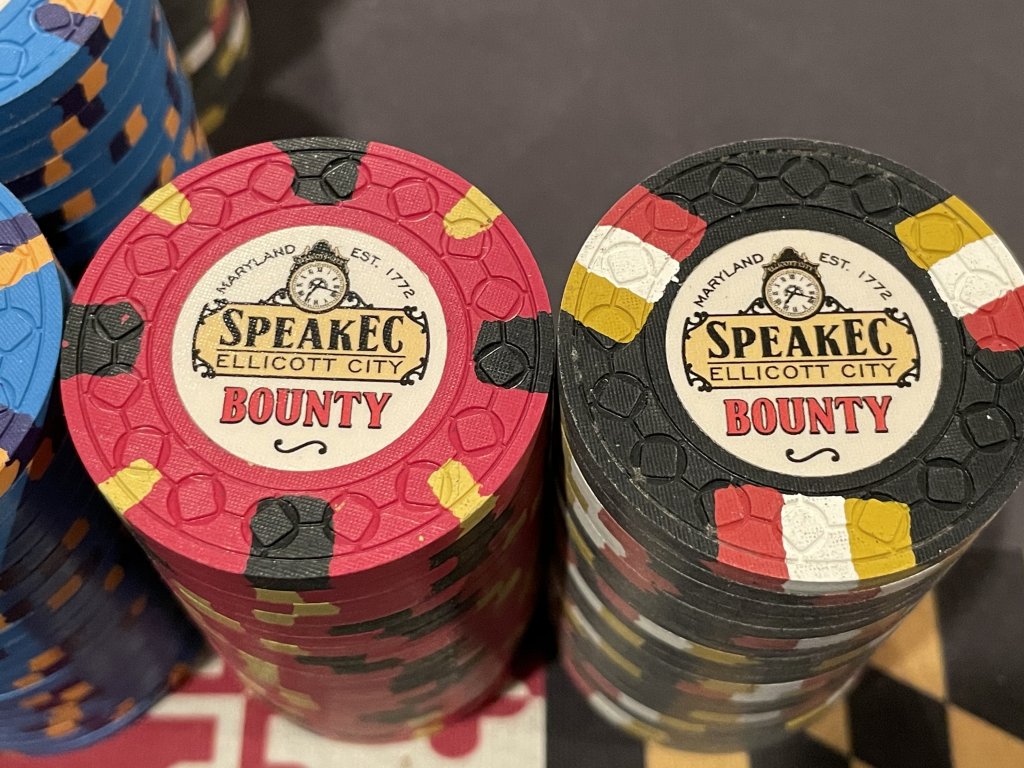 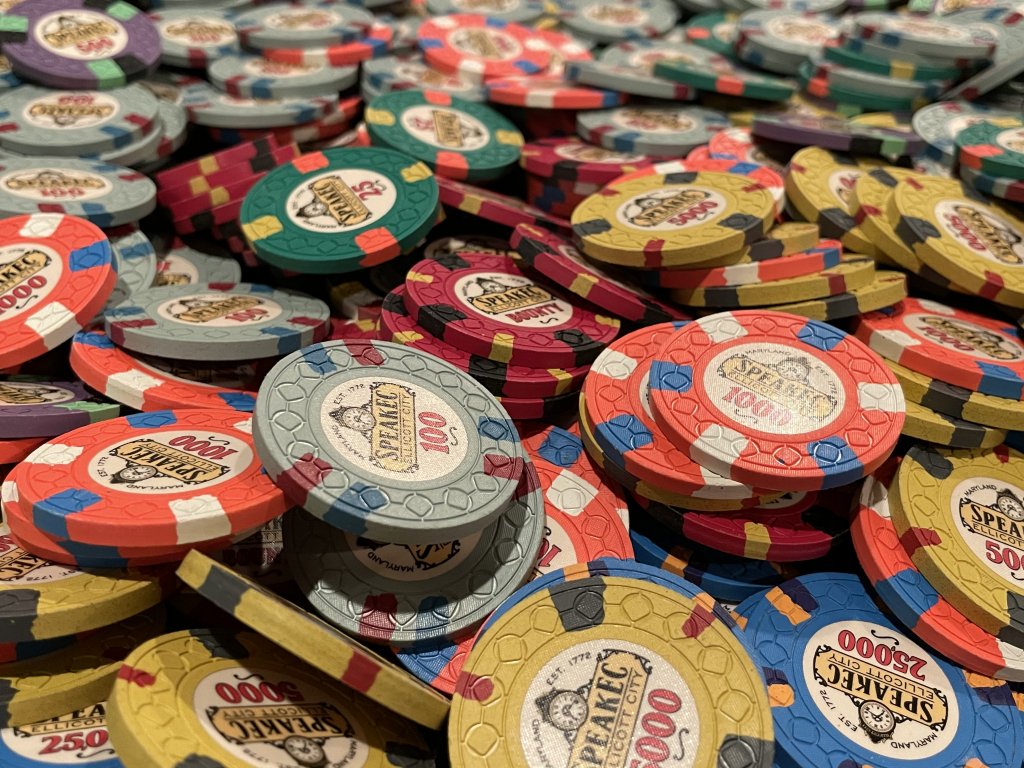 Reactions: DRG, Felt_Lizard, SantaClaus and 2 others

Gorgeous chips, excellently designed and turned out amazing! Have plaid with these and they are top notch! Well done!
Upvote 0 Downvote
Read more…
Top Bottom