Inspired by Gnu's introduction, I thought I would introduce myself in a similar lengthy post.

Life in the Forum
I am one of the many that flooded over from the faltering "blue" site. I never even heard of PCF before the "great blue wave" came flooding in here, but this isnt my first, or even second poker forum. I was once on HomePokerTourney, but frequently found the frequency of flame-wars over there to be unbearable. If I want to hear people talk badly about other people that they are supposedly friends with, I would go to work. HPT however was a great source of information (outside of the forums), so I stuck it out. Then a poster from ChipTalk mentioned on HPT a group buy that was going down.

That's when my chip addiction began...

Me, and Games
I was a geek before geek was chic. Any game will do, but strategy with a splash of luck rests most favorably on my palate. I have a games library with over 400 board and card games cataloged.

That does not count expansions, computer games, or Role Playing Games (or their expansions). Nor does it include duplicates (anybody up for 6 concurrent games of Monopoly?). It also does not count games that were filed without being recorded, or games that suck so bad they were just thrown out.

In childhood my gaming obsession made me weird, then I met others. Then conventions full of others. Weird, but not alone.

Zombie Poker Club
I lived in Detroit, then Chicago, before settling down outside of Nashville. My games (and my wife's games... more on that later) followed, but unlike the first 2 cities, there was no real gaming culture in Nashville. When I was buying my house, the previous owner was sitting on his computer playing poker on PartyPoker (any Americans remember that one?). Soon after, I had an account and I quickly was hooked on poker. So in 2004 we commissioned an artist to draw up a happy zombie playing poker, and I had my first set of custom poker chips.

Because when you are the kind of guy that owns 400+ games, with nobody to play them with, what is a couple hundred bucks for chips that might not get used?

The first group consisted of a handful of co-workers. Thanks to HPT, my games flowed like silk, but the nuances were lost on my players. I was invited to a couple of parties just to host games, but eventually these games dried up in about a year.

When we decided to relaunch, we decided to keep the whole thing in house. Mrs. Poker Zombie brought in her coworkers, and the game began to thrive. Where once we were looking at 6 player games (8 was huge!), we were now spreading out to 3 tables. We began referring to ourselves as a club (because people love to be in a club). The Zombie Poker Club was now alive and well.

The Zombie
The most frequently asked question... why a zombie?

Those that know me know I'm not into horror movies, and our card playing zombie is anything but scary. It's about the games. I was traveling around the country going to game conventions. Frequently as a representative for a game company, but often just for fun. At one convention I met Mrs (to eventually be) Poker Zombie. She was demo-ing a game called "Give me the Brain"; a game where the players are all Zombies working in a fast food restaurant. The object is to complete your tasks for the day, and then go home. Because many of those tasks require a brain, and there is only 1 brain behind the counter at any fast food restaurant, the players must compete to get the brain (and then hold onto it, and then complete their tasks).

As you can imagine, it is a light-hearted, full of laughs game. I mentioned to the girl demo-ing the game that I had a hat that looked like a brain, and that would be great for this game. We exchanged information, and 4 months later she had my brain hat - and all of my other shit - in her apartment.

So when looking for a design to put on a poker chip that might never get used, the Zombie was the natural result. We contacted the artist that did the artwork for Give me the Brain, and he drew our beloved zombie playing cards. Mrs. Poker Zombie did the coloring, and photoshopped the cards into his hands. Because if you look really close at our Zombie logo, you see he is holding a unique set of cards. Instead of matchbooks with our wedding date, we had playing cards with a little bride and groom and our wedding date put on all the tables at our wedding reception.

Zombies. They melt your heart.

Cool story....thanks for sharing it. I played a lot of Monopoly and Risk growing up. Kept us busy on rainy days. I remember PartyPoker and CasinoOnNet which became 888. Are the Poker Zombie chips ceramics? I see a stack of Paulsons in the pic.

I used to love playing games like D&D (Advanced and also 3rd edition) plus Stratego, Risk, Axis & Allies, Fortress America, Crossbows & Catapults, The Dark Tower, etc. One of my buddies even created a 4-player chess game and we used to all beat the hell out of each other in a free-for-all.

Very nice! I love the story. The funny thing was I felt strange calling your wife Mrs Poker Zombie, but after hearing the story it is completely appropriate.

I've spent a lot of time on the BoardGamegeek website recently, partly because my brother also seems to have 400+ games. I understand the way that the collecting bug can transfer to other interests - which is probably why we're all here?!

Thanks for sharing your story. It was a fun read.

welcome aboard. Please leave my brain alone. I like my brain

Tommy said:
Are the Poker Zombie chips ceramics? I see a stack of Paulsons in the pic.
Click to expand...

The top row (5/25/500/100) were the original buy. 500 chips. I thought they would be clay (and official casino weight), but we know how easy it is to deceive. Still, I was extremely happy. They worked well for 6-8 players, but when the game started growing to 12 I needed to make some extra room on the top-end. I picked up a barrel of Paulsons (T1000), and labeled them. As the game continued to grow I needed the bottom end chips again. I contacted the retailer that made my first run, but he no longer had those blanks. So I ordered the ceramics (second row and the T5000) to add onto the set. What he didn't tell me was that 1) they were a different thickness and 2) the colors on my monitor (and thus the color of the new chips) did not match the colors of the old chips.

So when I heard about the group buy on "Big Blue" I jumped in. As that buy has been dragging on for years, I have made some friends and learned a ton. I currently have roughly $4000 in chips either on their way (the Championship Poker Series group buy), or in some level of production (trying to get the FDL mold from ClassicPokerChips repaired).

I briefly owned a zombie tourney set with plaques. Even had the set designed to have plaques in the starting stacks........Another set I regret selling 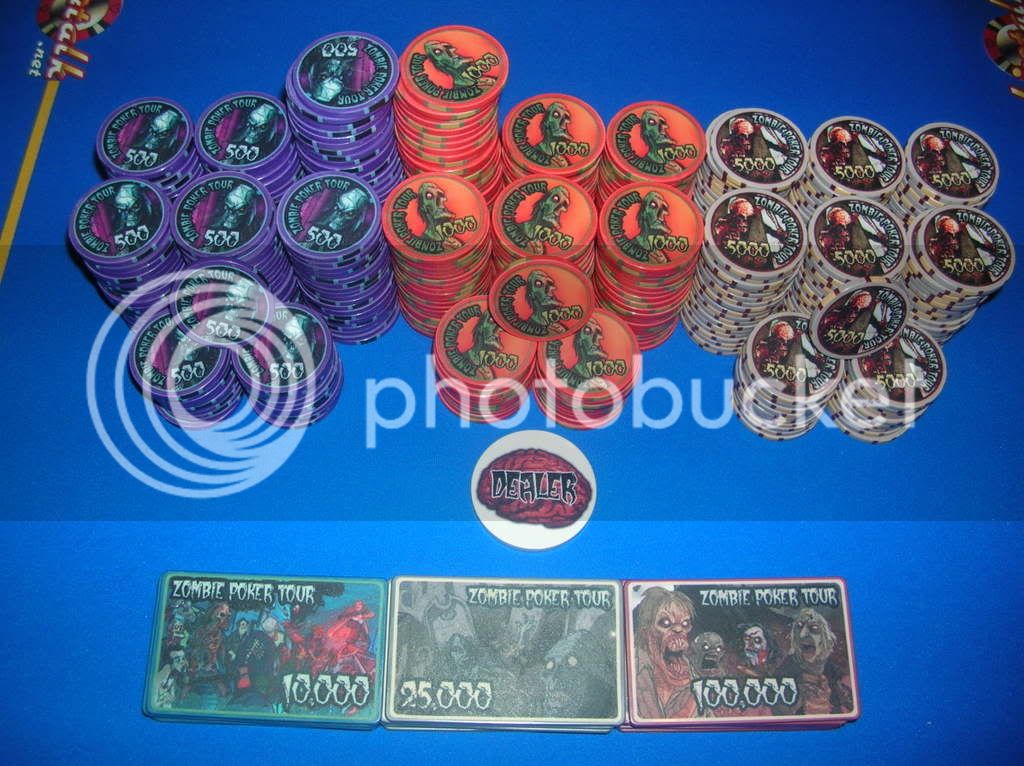 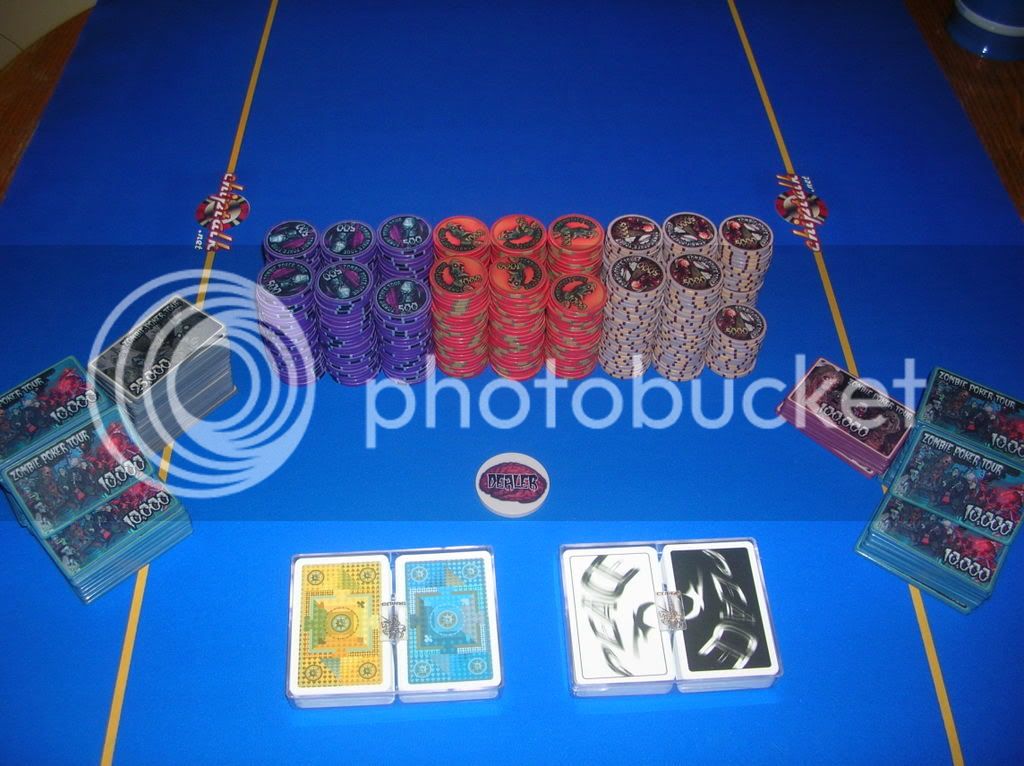 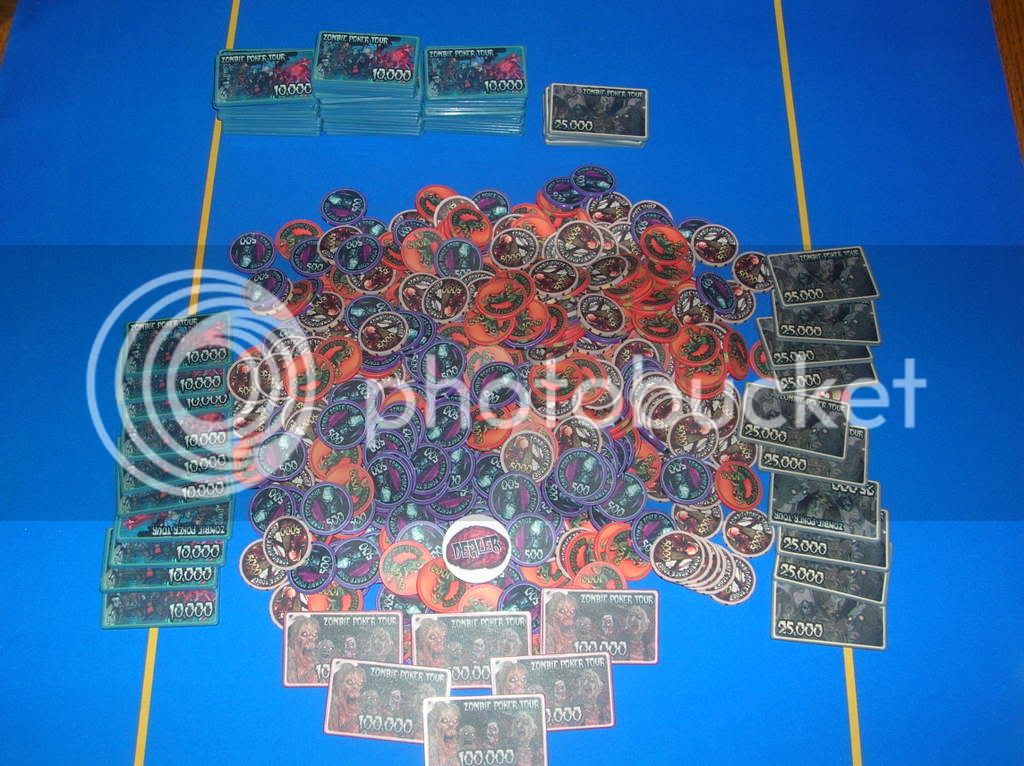 detroitdad said:
I briefly owned a zombie tourney set with plaques. Even had the set designed to have plaques in the starting stacks........Another set I regret selling

Thanks for the introduction and a great story. Great to have you here.

I was so close to picking up that dealer button, until I found OWPS. Custom card protectors/dealer buttons trumps anything off the rack.
You must log in or register to reply here.

C
Return of a retired chipper

Yesterday at 1:50 AM
Mongoose