Preface: Psypher1000 is an idiot, but his lessons are born from the wisdom that comes from experience. That's all the context you need for the following (based-on-an-entirely-true) story.

Once upon a time, Psypher1000 bought 500 Milanos, and thus began his downfall. He was so excited when they arrived at his doorstep! White 1s, blue 10's (because I like them, okay? It ain't your set!), and overly tall $5s (WTF?). And then he smelled that awful china clay smell.

So he bathed them in dish soap and water to remove the odor.

It didn't remove the odor.

Two days later - seriously, two days later - Psypher saw a good deal on 1000 Stardust Poker Mansion cash set chips. The illness that had set in with the Milano purchase had spread to his hands and wallet. In other words - it's terminal.

He bathed and brush-scrubbed 600 of them. They looked great!

And then his hands and back hurt.

Lesson 1: If you use oxy in your chip baths, wear gloves. Scratch that. If you're going to clean chips, wear gloves. Yellow gloves will suffice, but purple ones work the best while chip cleaning.

Later, Psypher1000 acquired over 1k chips in a filthy state. Mostly Empress chips, of course, because Empress. But some Par-a-dice for fun, and some Casablanca $5's because he's not sure why. It was a late-night, sleep deprived purchase. Don't judge him. We've all done things we're not proud of and/or don't remember clearly.

(Side note - all your $1 Empress chips already belong to me. You just don't know it yet. Just go ahead and send them my way. PM me for the address. We can work out the payment arrangements later.)

When he ripped open the bags that the bulk chips came in, he saw the chips in their disgusting state and knew there was no way he was cleaning the gunk out of that with a brush. No way. So he finally looked at all the information stated here...

...and his back smiled. 600 chips could be cleaned in minutes instead of hours, he thought, and best of all, no back pain! So he set off to acquire all the items listed in that thread.

Lesson 4: Acquire all the items in the thread. Just pay the damn money and do it. If you can find a good deal on eBay, so be it. Otherwise, just use the links included in the thread.

Psypher1000 thought he could find a better deal on that sonic cleaner than what Amazon offered, and low and behold, he did! $170 out the door on eBay! And then it arrived with a plug containing round pegs instead of flat.

Lesson 5: Unless you live in a country that uses it, don't buy a 220 volt machine instead of a 110 volt machine. This will leave you spending money on an adapter that you otherwise saved because you thought you were smart.

Lesson 6: When you finally get the power converter so you can use your 220 volt sonic cleaner, make sure the switch is set to 110/120 power input instead of 220/240 or else it won't work and you'll think your new sonic cleaner is broken and feel even dumber than you did before you learned Lesson 5.

Finally Psypher1000 had acquired all the necessary parts, including purple latex gloves and eye protection, and went about following Ski's instructions. After disolving the "TSP" in the initial 2 cups of microwaved water, he added the extra 6 cups and turned on the heater to set it to 110, but there are only two digits on the thermometer display.

So, with the heater on. he waited. The temp barely went up. Ah, the instructions said to turn on the ultrasonic part to make the heating go faster! So he did. And, technically, it did heat up faster. But not by much.

Lesson 8: Heat all the water in the microwave, 2 cups at a time. Adjust your duration so as not to overheat the water, b/c you don't want to risk stripping out the color from your chips.

Finally, the water was hot enough for the initial cleaning to begin. What chips to start with? But of course, the misbegotten Casablancas! What rapture! The illegitimately purchased chips had received new purpose in life - the equivalent of a chip cleaning crash test dummy. But purpose!

The chips went in, they spun around, and things got wet. Quickly.

Lesson 9: This process makes splashes. Put towels everywhere. Got an apron? Wear it. Got purple gloves? Of course you do, because I told you to get them! Wear them. Got eye protection? Wear it. If not, stop now, and get some (eye protection)!

Three minutes later, and the first test batch was done.

So clean. So beautiful. Lovely, de-grimed chippies! He gave them a good rinse and set them out on a towel to dry. The next batch he decided to test for two minutes, just to see what would happen.

Lesson 10: Only the *very* worst of your chips need any longer than two minutes in the dip, and even those might not need that long. Seriously. This machine/process is dope. You don't need to overdo it. You'll think you do...but you don't.

After rinsing the latest batch Psypher1000 turned to set them out to dry when he noticed...oh hell...the Casablancas were faded!!! NOOOO!!! This was terrible...hundreds invested in a process only to have it fade his beloved chippies (that he doesn't recall ever wanting in the first place).

But wait...mineral oil...if anything could solve this, it's mineral oil! He quickly ran to the cabinet, grabbed the mineral oil and a rag, and went to work. He remembered others saying that less is more, so he dropped just a few drops of oil onto the rag, worked it in well, and started wiping down those chips.

The heavens opened and the angels sang, for the Casablanca $5's were born again.

Lesson 11: If you do any kind of deep cleaning of Paulsons (and it may be true of other chips), be prepared to oil them afterwards. The colors you see on dirty chips are NOT the chips' actual colors, but rather are perceived through the oils of thousands of hands touching them before yours. Only by applying a *thin* coat of 100% mineral oil (you could use baby oil, I'm told, but I'm fresh out of babies, so mineral oil) will that color be restored to it's previous glorious sheen. Your other alternative is to simply get used to chalky looking chips until human oils make their way back to said chips.

And thus it was that hundreds of filthy Paulsons were cleaned, oiled, and racked by Psypher1000. Don't make the same mistakes or assumptions he did. Read the instructions and advice in the thread listed above. Consider it gospel to your chip-loving soul, for it will bring new life to unwanted chips.

And why the devil can't I edit my own OP?

That was one of the better reads in awhile, lol. Well done sir. 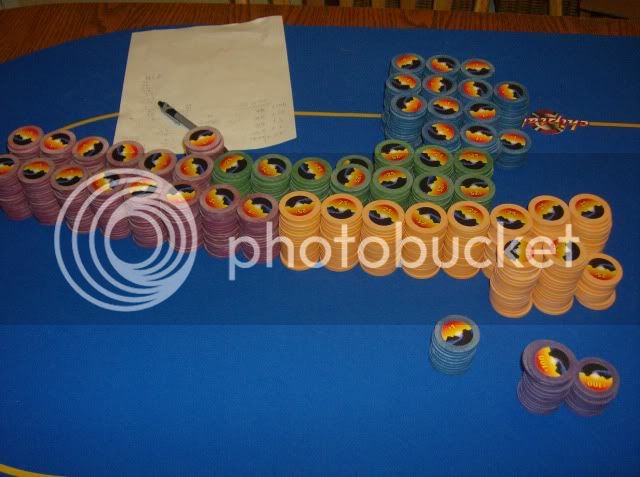 A great read, and with loads of valuable information.

Could this thread be stickied (stuck?)?
You must log in or register to reply here.