I think I'll be back for a couple more... I have way too many chips to fit in only four cases. 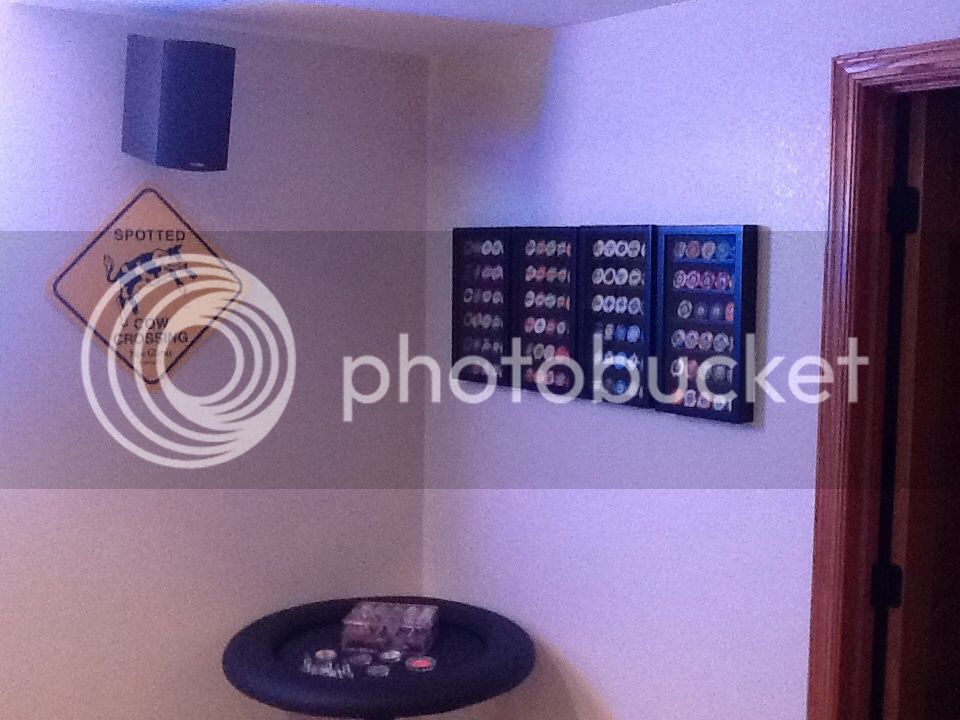 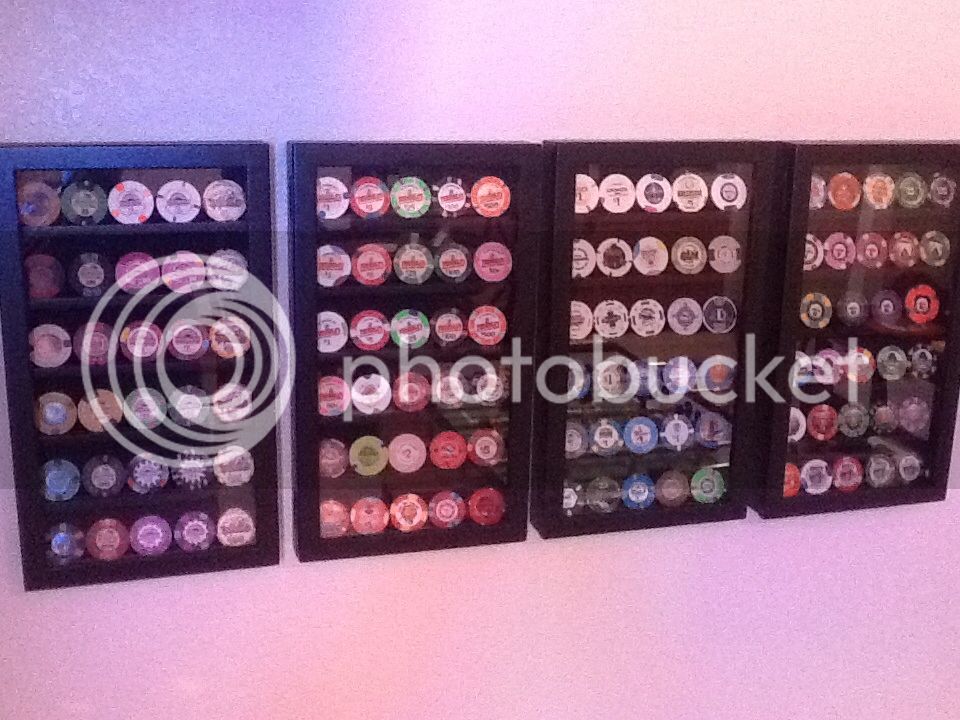 I'm going to stop there tomorrow.

Oh wow, those ARE nice. I don't really collect individual chips, but I do have a few "sample sets" for which I'd like to get display cases, and those look perfect.

Thanks for sharing Tri!

I'm going to stop there tomorrow.
Click to expand...

Yup, thems the ones!

Cool. Thanks for the heads up. These will work perfect for my sample sets.

That's a great find! I'm definitely going to need to pick some of these up. I've got a ton of sample sets and individual chips that are just sitting in white chip boxes.

Those are really nice.

Tri, thanks again for sharing this. I didn't even know that Michael's carried stuff like this. I just got back from a local store, and they had four in stock. I guess that pretty much tells you how many I bought.

I found that you can get as many as seven 39 mm chips on one row if you're willing to have a little overlap. Otherwise, as Tri showed in his photos, you can get five chips on a row, with just a few millimeters to spare. My only disappointment is that I can't fit my "Hitching Post" dealer button in the case alongside of the rest of the Hitching Post chips and Bounty chip.

The store I visited had a LOT of different display cases for things like baseballs, baseball bats, trading cards, footballs, football helmets, basketballs, vinyl albums, CDs (very nice, with an upper part for the jewel case, and a lower part to display the CD itself), shot glasses, etc. They also had generic "shadow box" cases, glass boxes, and glass cages for whatever little keepsakes you might want to display.

All those display cases are 1/2 off right now.

To be clear, though, I did NOT see any glass curio cabinets in Michael's that would be suitable for creating a Mr. Cheese Style Terrible's Shrine. Probably for the best. One of those per continent is probably enough!

ski_ex5 said:
To be clear, though, I did NOT see any glass curio cabinets in Michael's that would be suitable for creating a Mr. Cheese Style Terrible's Shrine. Probably for the best. One of those per continent is probably enough!
Click to expand...

Mr. Cheese said:
Lol I'm sure once Tommy gets his basement finished he'll have an entire basement shrine to Terrible's
Click to expand...

Yeah, but there's a difference: That basement can be easily sealed from the surface by a HAZMAT team.


ski_ex5 said:
Yeah, but there's a difference: That basement can be easily sealed from the surface by a HAZMAT team.

: What's wrong with me? I think this TCF forum, err... PCF forum is a bad influence on me. My tiny little mint Terrible's set has already grown to well in excess of 400 chips. Next thing you know, I might be RE-LABELING other perfectly good collectible casino chips with the Terrible's logo.

Has anyone seen any uncirc'd La Grange secondary $1 chips for sale??? AAHHHHHH! IT HAPPENED AGAIN!! SOMEONE FROM SOME OTHER FORUM PLEASE HELP ME!!!

Really... I'm not even sure I've seen a photo of La Grange secondary $1 chips.

Thanks for posting the link to these displays Trihonda! I picked up two of them today and already have them filled and on the wall!

Picked up four more. Three more for chips, one for my office. Have a bunch of challenge coins from work. 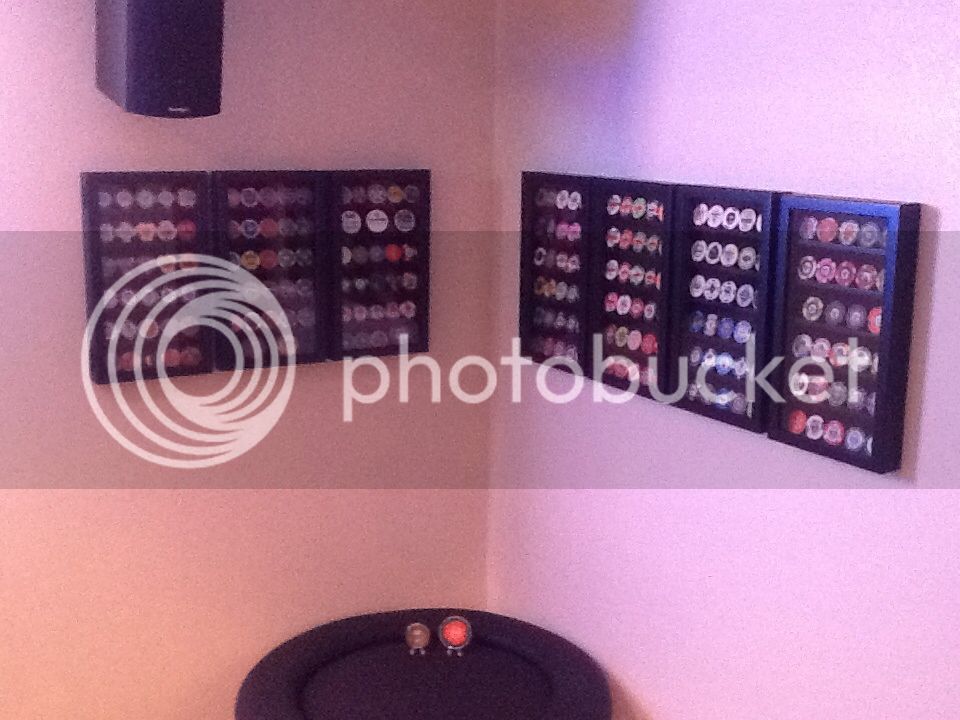 That's sweet looking! I like that little heads up table too.

Something most may not know about me, but I have this cool collection of military and police challenge coins. I used one of my michaels boxes to display these in my office. 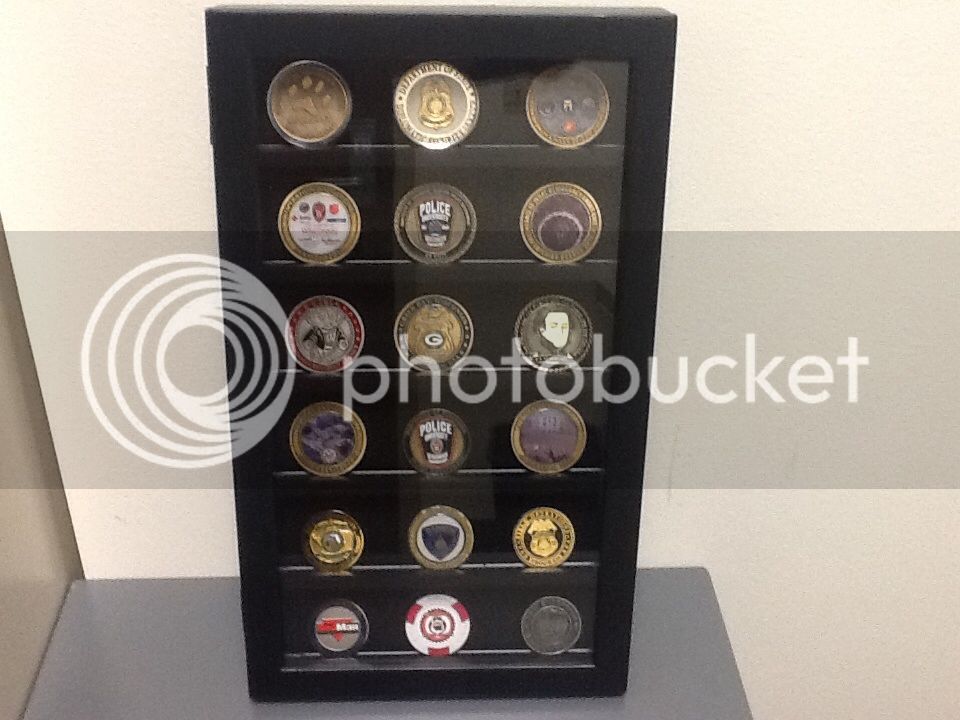 That is pretty cool. These cases and the other models will come in handy for displaying my small Terrible's items.

I think my coins will need to make a trip home during the MTTD, so they can be properly appreciated...

Trihonda said:
I think my coins will need to make a trip home during the MTTD, so they can be properly appreciated...
Click to expand...

Are you displaying those coins at your work right now?

Mr. Cheese said:
Are you displaying those coins at your work right now?
Click to expand...

Nanuk cases on sale on Amazon