Whoa! Edges somewhat rounded but at that price you can't complain

For $40, even if they do nothing but dump them in a plastic bag, stick it in a box, and ship it to me, I'm still probably ahead of the game. I'll take that risk/reward ratio any day of the week!

Psypher1000 said:
For $40, even if they do nothing but dump them in a plastic bag, stick it in a box, and ship it to me, I'm still probably ahead of the game. I'll take that risk/reward ratio any day of the week!
Click to expand...

Wow, not often you see roulette chips made on the LCV mold. Probably not much depth left to re-label, but plenty good enough to play with once cleaned.

Wonder if they were made by C&J or Paulson. Referenced timeline in the auction would indicate C&J....

Got the chips today. Al things considered, thy are in great shape and will clean up nicely. Not the worst chips I've seen, that's for sure. The real gem is a barrel of near mint horizon blue LCV's...awesome!

Steal of the year.

I'll sell you a brown chip for $50. #andyoudgladlypayitiftrue

incredible stuff for the price you've paid,
congratz for the move

Awesome score! What a steal!

Price paid, materials and time added up into making these beauties shine and you'll still make out waaaaaaaaaaaay ahead! Good luck and Really looking forward to the after pics!

Wow those look great! Got plans for em?

Never seen the injection nipple on LCV's before. Has anyone ever seen that?

Sweet score, What are your plans for them?

That is very odd, indeed. Don't recall ever seeing that on any LCV chips until now.

I think these are C&J chips. Hats look taller. I can't tell if the canes are longer. Can you measure the canes?

I will measure tomorrow. Who/what is C&J?

Psypher1000 said:
I will measure tomorrow. Who/what is C&J?
Click to expand...


Christy and Jones. They were the original owners of the TH&C mold. They can generally be distinguished from the Paulson chips because as a newer mold the TH&C creates a shiny impression.

As stated earlier, the referenced timeline in the auction would indicate these were produced by C&J. But I don't remember seeing dots-in-hats on any THC chips before, no matter who made them....

First time I'm seeing it, too.

I suspect these were made on a drilled-out or purposes-made hat & cane die, perhaps to intentionally differentiate roulettes from cash checks?

Actually, I have seen injection points in similar locations on other chips (round peg in square hole). 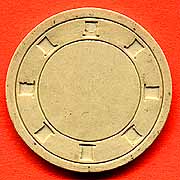 But your 'differentiate' point is a very good one. I suspect that there is someone on the ChipBoard who knows, or has seen these types of chips before.

BGinGA said:
Actually, I have seen injection points in similar locations on other chips (round peg in square hole).

But your 'differentiate' point is a very good one. I suspect that there is someone on the ChipBoard who knows, or has seen these types of chips before.
Click to expand...

This is driving me nuts. There's no injection in a compression process, far as I know.

Even if the preliminary blanks are produced with injection to make the spotted blank out even a solid blank, when it goes into the dies for compression molding, any pips would disappear. If pips from injection remain, they were never pressed - or the pips were part of the mold design.

I just checked all my casino Paulson and my Fun Nites. No pip marks.

Did Paulson ever play with injection molding some other material chips instead of compressing "clay?"

A few more details on these.

It is *highly* doubtful these were used mid-century in Kentucky. This is not the shiny-hat C&J mold, and the Paulson H&C mold didn't come into production until 1965. All the KY gambling halls were closed by the time the Paulson H&C mold was around, and I could find no example of a KY casino using a H&C chip of any kind. In short, very likely not KY, and definitely not pre-1965. I don't care that they aren't from KY nor do I care that they are post-1965, but I've reached out to the seller just to see where the story came from, and to see if I can track it back any further.

The mold, look, feel, chip composition, wear, and even staining patterns on the edge - they all point to a Paulson-made chip. I've handled a number of H&C knockoffs, and these don't feel or wear the same If these are fakes, they are the best fakes I've ever handled. Others on The Chip Board/chip collector's club also agree that they are Paulson. There are a few skeptics, but most agree that they are legit.

The pips, unfortunately, remain a mystery. If they are Paulson, I speculate that they are either a) early production line copies, or b) intended to indicate they were for home/non-legal casino usage. I would lean towards A because some chips have them and some don't., and those that do only have them on one side. I suspect that these were from early cups/hobs, and that the pipped variety weren't discovered until some chips went out the door. Paulson's never been great about matching their H&C molds from side to side...this could just be one more instance of that trend.
You must log in or register to reply here.

Not Mine Hi Desert $1 on ebay

Not Mine My custom dollar

Not Mine Aztars on Ebay