Mr Winberg said:
Are these the ones where the edge spots make it look like there are twice as many but half as thick chips in a stack?
Click to expand...

Yes! I still have them.

TheDuke said:
Yes! I still have them.

I hadnt played NLHE before but it seemed pretty simple. Nobody else seems to ever bluff so I started just bombing away at pots and I ran great.

Won the first 4 tourneys, chopped the 5th because everyone was sitting around, came in second in the 6th. Walked out plus like $400.

I still have pics of my very first home tournaments (NLHE) back in 2006. Buyin was €5 (were all students and mostly played with pocket money). 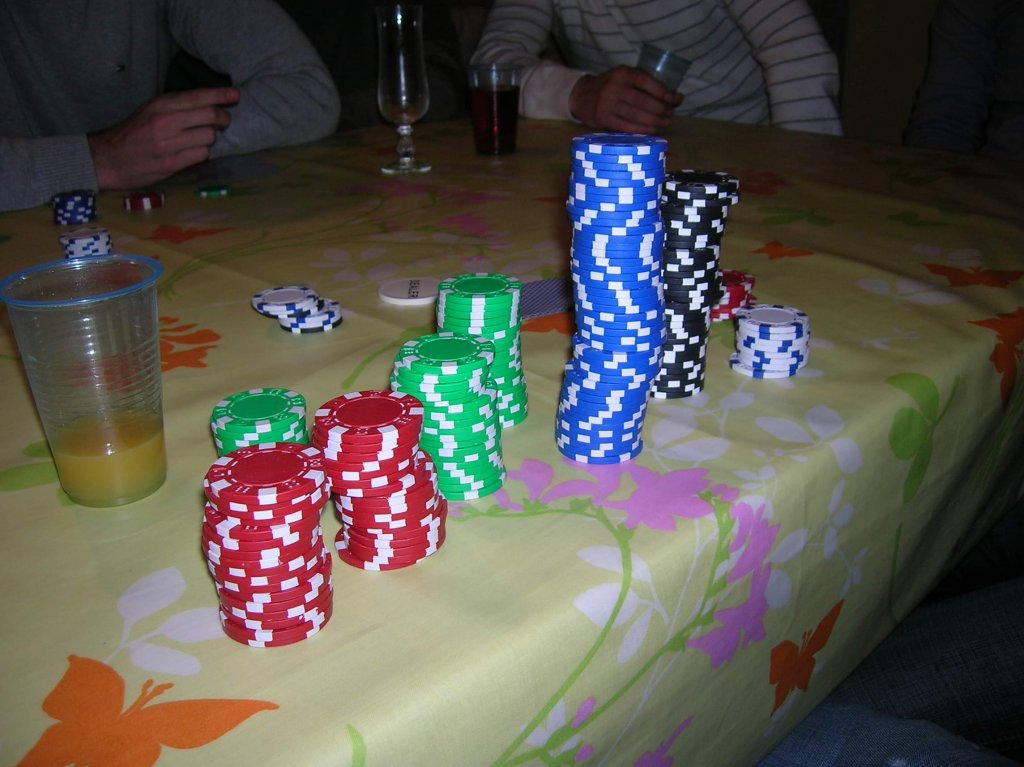 The first home game I ever played was at a friends house as a child, but don't remember much of it.

My first real cash game I ever played in was last year though in September. A buddy of mine I hadn't seen in a while asked if I wanted to come play poker, but I had no idea what the buy in was, or if there even would be one. I knew nothing of poker at the time, and had to study the hand ranking chart before I went.

Buy-ins were $25-$100 and we had multiple people buying in for $100 and buying back in. I bought in for $25, and was terrified. I don't even remember the denom breakdown or blinds we had unfortunately. We played with what looked like 2-3 mixed sets of dice chips, poker stars "dice" chips, and some other equivalent.

As the night progressed, they decided to raise the blinds every half hour because they wanted to end it sooner since more and more people began to show up and it started to become a party instead of just a small poker night. It was a sh#tshow, and I was so lost in the sauce the entire time.

I walked away with $147 that night, and man, that got me hooked.

I don't think I am a good player yet, but I am not sweating bullets anymore playing with $20 buy-ins
L

I remember playing at a buddy's apartment shortly after graduating college. It was a great time! The host drank himself poker-stupid and re-bought after like 3 hands, LOL. I think it was a $10 buy-in. I told myself before going I wasn't going to drink anything while playing, and try to focus on my poker game. Ended up getting it to heads-up and the other player wanted to chop up the prize money and party. I was having so much fun playing, I turned down his offer, and we played it out for whatever the standard split was, I think 50%/30%. Ended up taking it down by playing pretty tight and figuring out his style, and trapping with a good hand! Then we all partied. Great night!

The first game I played in regularly was my parents weekly Saturday night game, from 1956 on, with two neighbor couples (both FBI agents, so not likely to be raided ). Then came the weekly Sunday uncles' game at my grandmother's house. Both were three cent limit, three raises. No chips -- each player brought along his own one pound coffee can full of pennies. Games were five stud, five stud w/ sixth card replacement optional, five card draw, seven stud, and seven stud w/ low hole card wild, and blessedly rarely, a hand of 1492 -- aces, fours, nines, and deuces wild.

When I started playing regularly with buddies in junior high and high school, the games were mostly Anaconda high-low (aka Pass the Trash) and the like. I still love that game, but nobody plays it any more.

In the Army, especially in 'Nam, it was nightly 1/2 limit stud and draw against a bunch of crusty old warrant officer 4s when we were in base camp. We had pretty much nothing else to do with our money anyway...
L

We played quarter/quarter NLHE and one of my guys was pissed that his 3 pair lost the hand. I still laugh about this memory. Good times.


TheDuke said:
Yes! I still have them.

L
How much time for socializing?
2