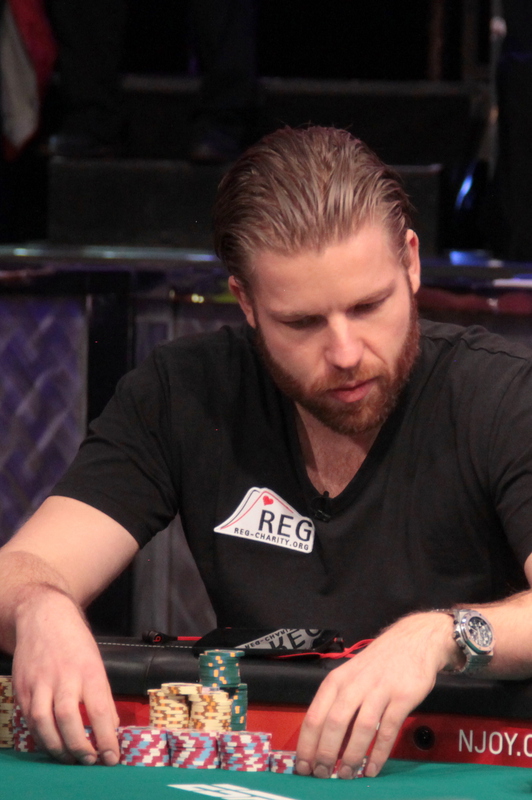 Card Player’s 2014 WSOP coverage is sponsored by CarbonPoker.
Jorryt Van Hoof came into the final table of the 2014 World Series of Poker main event as the chip leader and held onto the lead in dominating fashion into three-handed play. Unfortunately for the 31-year-old Dutch poker pro, he couldn’t hold onto his chips against Felix Stephensen and Martin Jacobson.
Van Hoof, the second player from the Netherlands to make the November Nine along with Michiel Brummelhuis in 2013, lost the majority of his stack in a hand with Stephensen. Van Hoof called a big river bet by Stephensen with a marginal hand, hoping his opponent was bluffing. Stephensen was bluffing, but with the better hand.
As the short stack, Van Hoof raised to 3.6 million on the button and Jacobson reraised to 9.2 million from the small blind. Stephensen folded and Van Hoof moved all in for his last 46.2 million. Jacobson made the call with A

and saw that his hand dominated Van Hoof’s A

and Van Hoof was eliminated in third place, earning $3,807,753. Van Hoof’s career earnings now exceed $4.1 million.
Van Hoof was selectively aggressive on the first day of the final table, raising 67 out of 224 hands before three-handed play began. After that, however, he won only half of his eight showdowns.
After the hand, Jacobson enjoyed a chip lead over Stephensen of 142 million to 58.5 million.
Here is Card Player TV’s look at Van Hoof’s post-elimination press conference:
For more coverage from the 2014 summer series, visit our WSOP landing page.
If you couldn’t get down to the Rio this summer, you can still compete with Carbon Poker. Click the banner below for more information. Card Player readers are eligible for an initial deposit bonus of 200 percent up to $5,000.