Hi. Curious about these chips. Does anybody know what are these? Plastic? Clay? Compressed inlay or sticker? 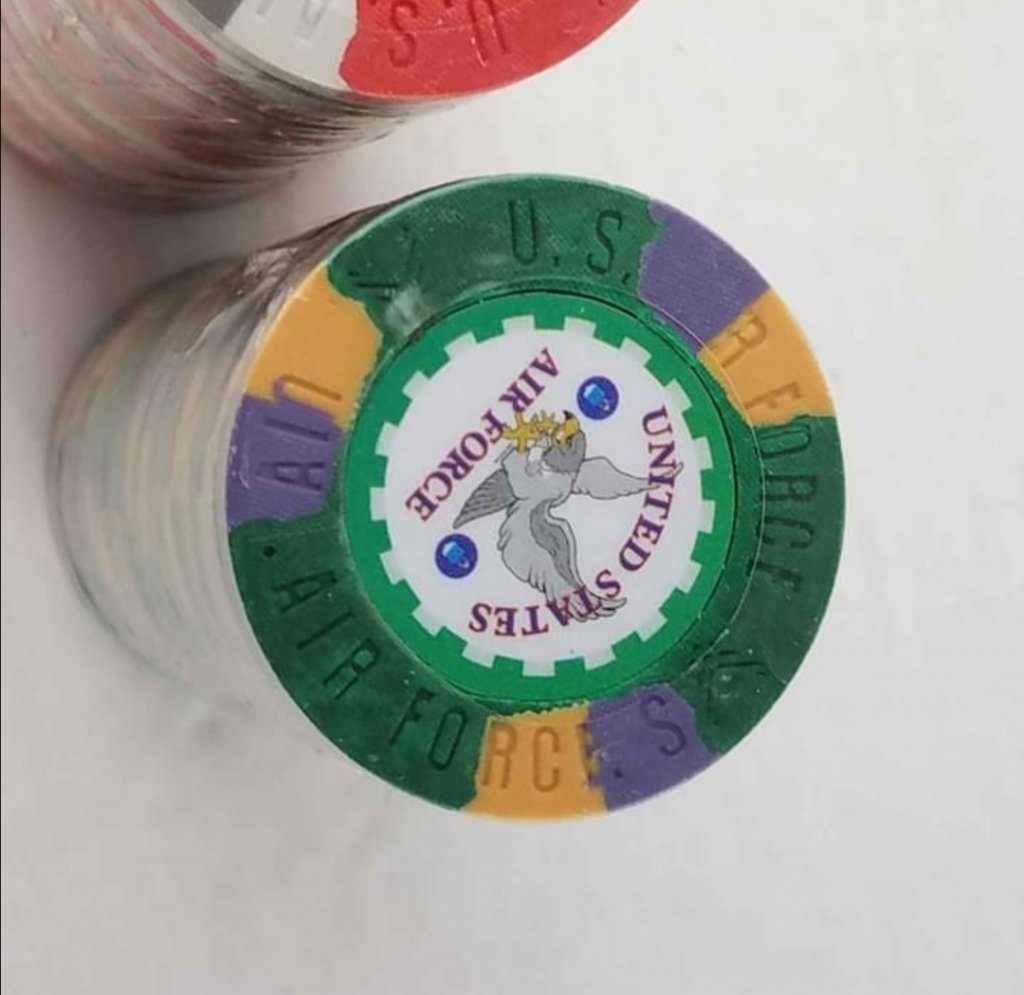 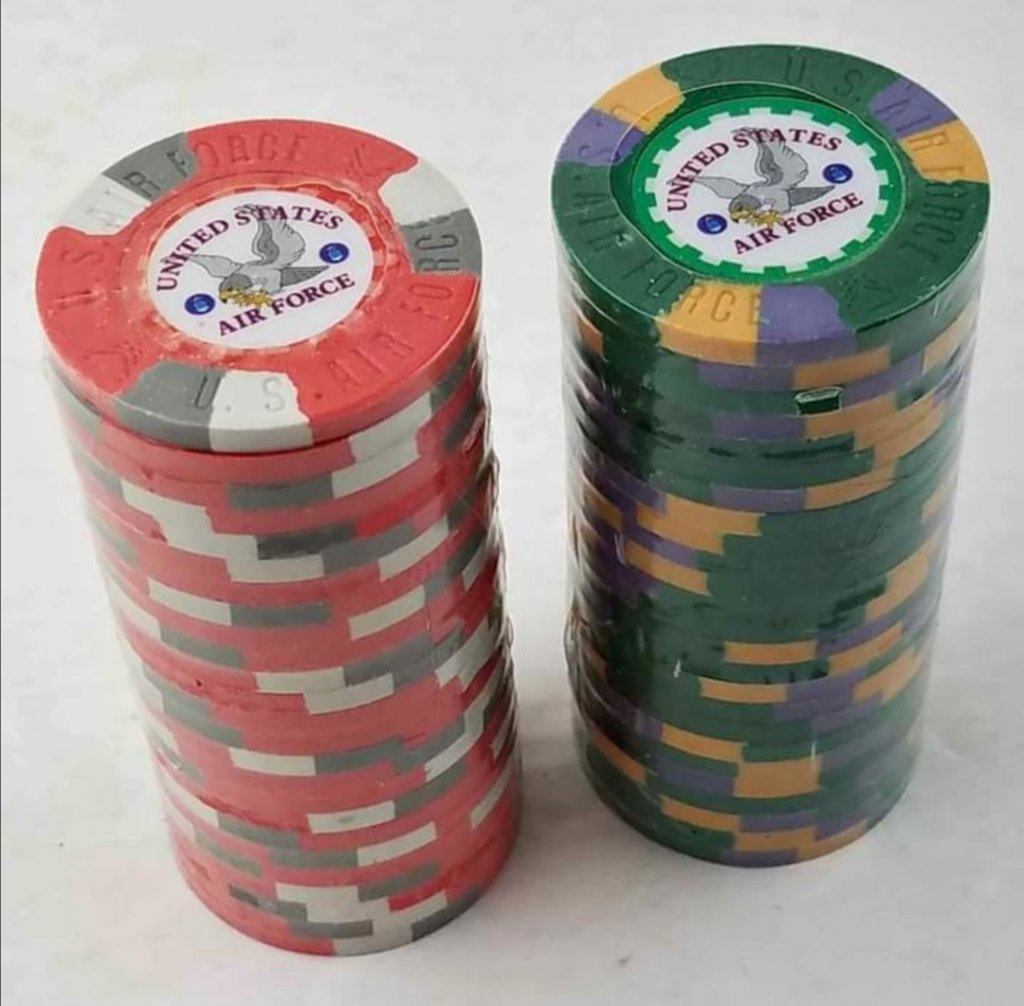 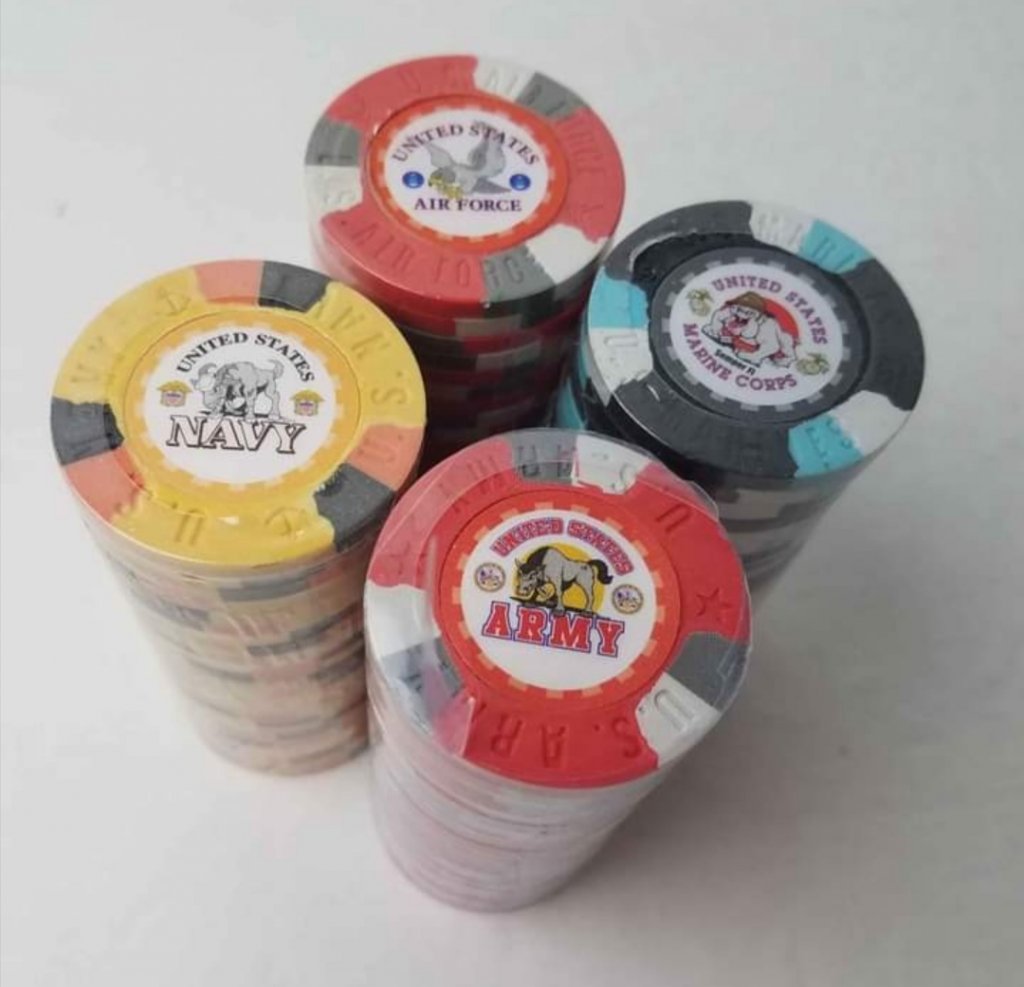 Cheap plastic chips. The fact that they come bundled in plastic is always a give away

There was a line of early China Clay chips that had Army/Navy/Air Force/Marines branding. They were similar to the Nexgen 8000 / 8002 series, and were plastic chips without a metal slug. You can read about the Nexgen series here: https://www.pokerchipforum.com/threads/what-are-these.24736/

I've never seen a picture of the military Nexgens, and there don't appear to be any on PCF. Are these them? @BGinGA in that post says they had identical colors/spots to the other Nexgens, but the ones shown here don't match colors/spots with any of the ones from that post. So I'd cautiously say "no, these are not Nexgens" but I'd want to get confirmation.

The referenced military-branded chips (vaguely similar to those pictured in the OP, but not the same chips imo) were 9.5g plastics with no metal slug, and nearly identical to the NexgenPro line (and dozens of similar clones, including the Dunes Commemoratives offered by TheChipRoom). They all had different mold markings and label designs, but shared the same medium-density plastic material composition and 4T38 spot/color theme (Desert Palms and others used a 3D14 spot pattern with different colors).

They were NOT China Clay, nor were they similar to the three or four original Nexgen chip product lines (which were 12g slugged plastics with more of a hockey puck feel).

The actual chips pictured in the OP above have different colors and much worse label designs and color-matching than the original versions. Wouldn't surprise me if they were also slugged, given the hidden wheel design under the labels -- which did not appear on the original NexgenPro chips or clones.

Noteworthy to mention that the two TCR chip lines (Dunes Commemorative and Desert Palms) appeared in the market first, and were later copied by NexgenPro and other clones -- not the other way around (and all were initially made in the same Chinese factory).
F

Thank you for the detailed explanation
You must log in or register to reply here.

BCC Poker Chip Clay Formula: What Happened to It?