Welcome to Jack's Card Room: Tales of Donks, Degeneracy, and Dice Chips (well, not the last one)

I'm thrilled to finally reveal part of what I've been working on for the last several months. I have a custom 44mm CPC cash set in the works that I hoped would be ready before the table got made, but c'est la vie. I'll add pron when the chips come in. This is my first "big boy table", and couldn't be more thrilled to upgrade! Here's a bit of backstory:

Jack's Card Room came to be after I decided after an eight year sabbatical from poker to get my home game going again. The previous eight years, I was busy working, going to grad school, planning a wedding, buying a house, and having a kid. There wasn't much room for poker and maintaining a regular game in between all of that. I'd play once in a blue moon, but pre pandemic, I've played in and hosted more games in one year than I did in thr previous eight.

The significance of the name isn't too far out there. All of my father, wife, and son have some varation of the name "Jack" and the name is a nod to each of them. Primarily it's geared to my son whom will probably own a lot of my poker stuff one day. The New Jersey state map outline is set in the background because that's where we all grew up and live. There's really nothing more to it than meets the eye, it's a pretty simple design.

Estimated Grand Reopening of Jack's Card Room is July 5, 2020. I'm looking forward to filling this thread with nasty bad beat stories, shenanigans of all kind, and most importantly, awesome chips. I'm going to reserve a couple of posts below this one and illustrate all of the chip sets that are going to be used in Jack's Card Room. Don't worry though, there are more sets to come!

Here's some table pron until the chip photos get uploaded! 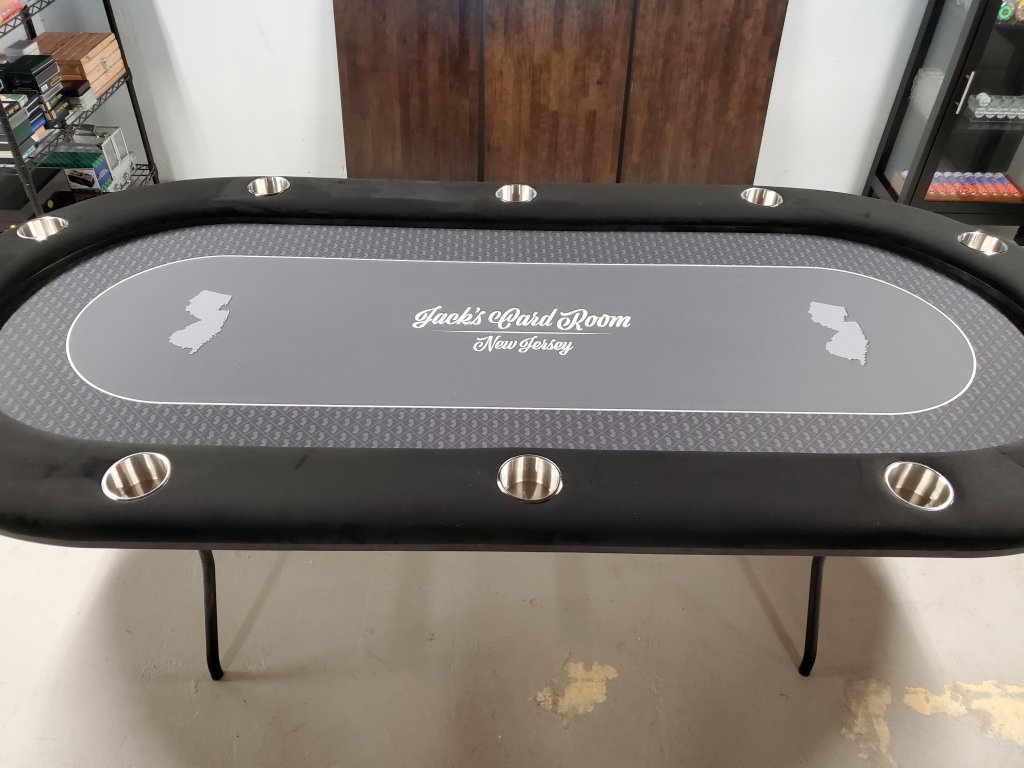 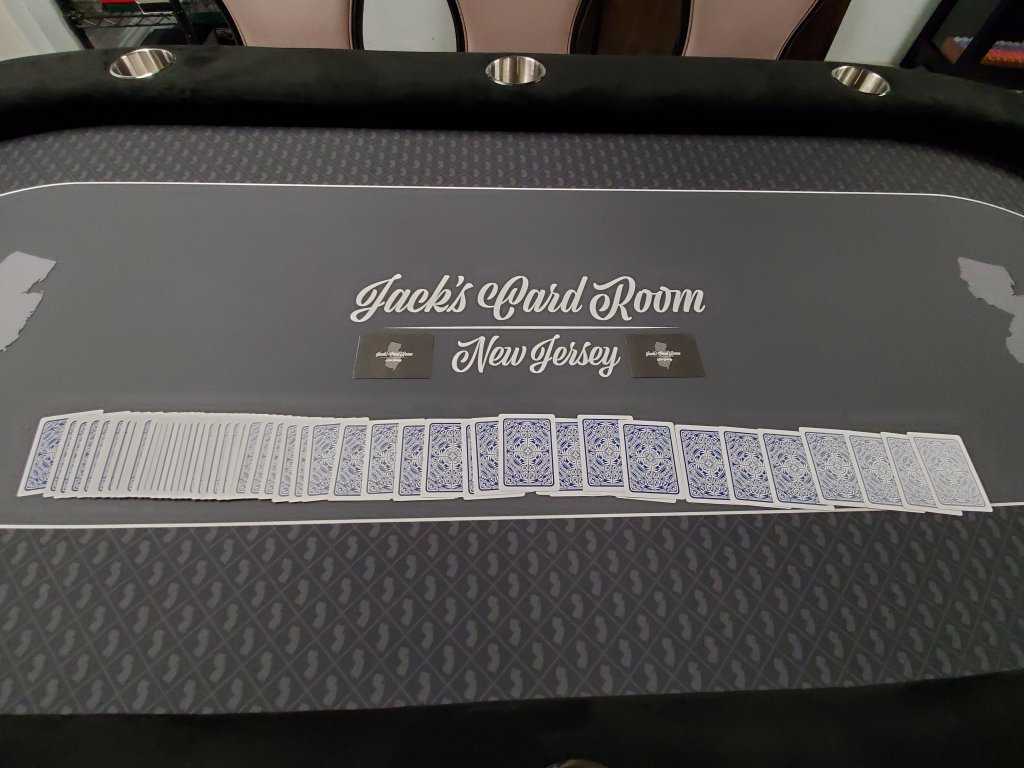 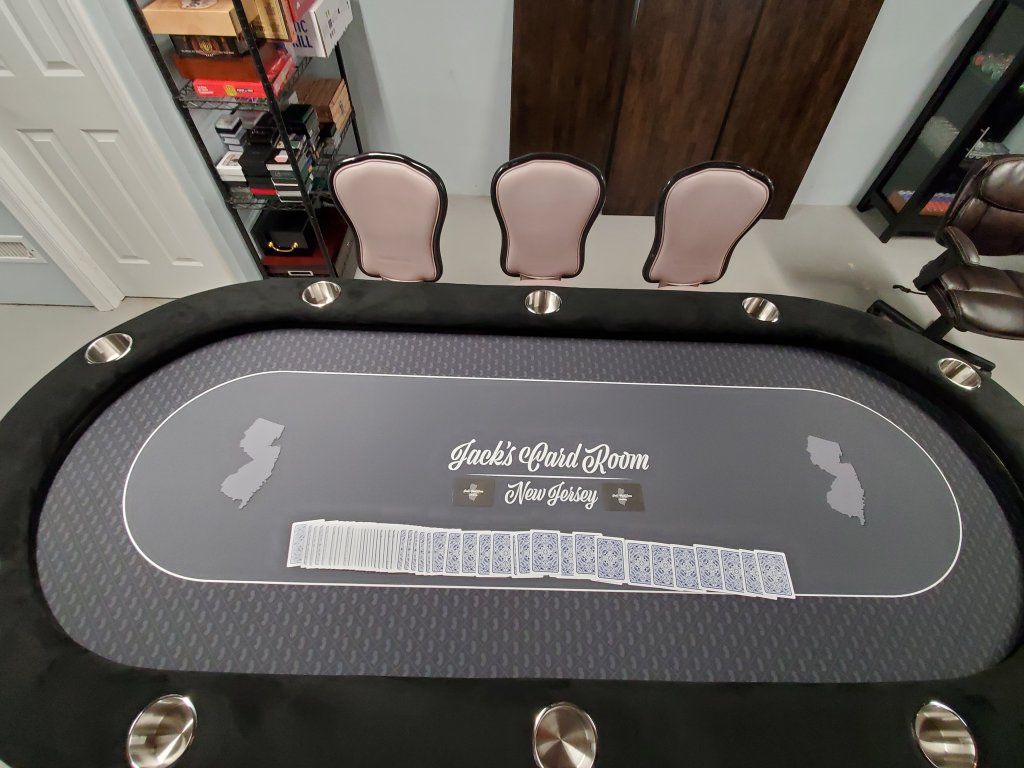 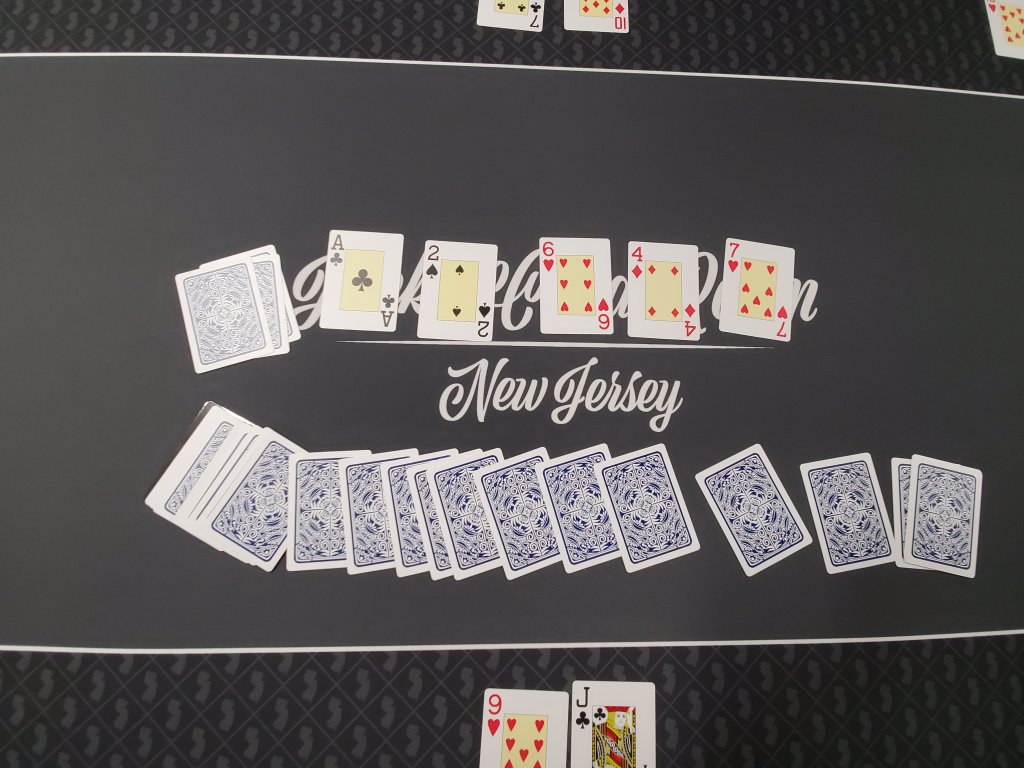 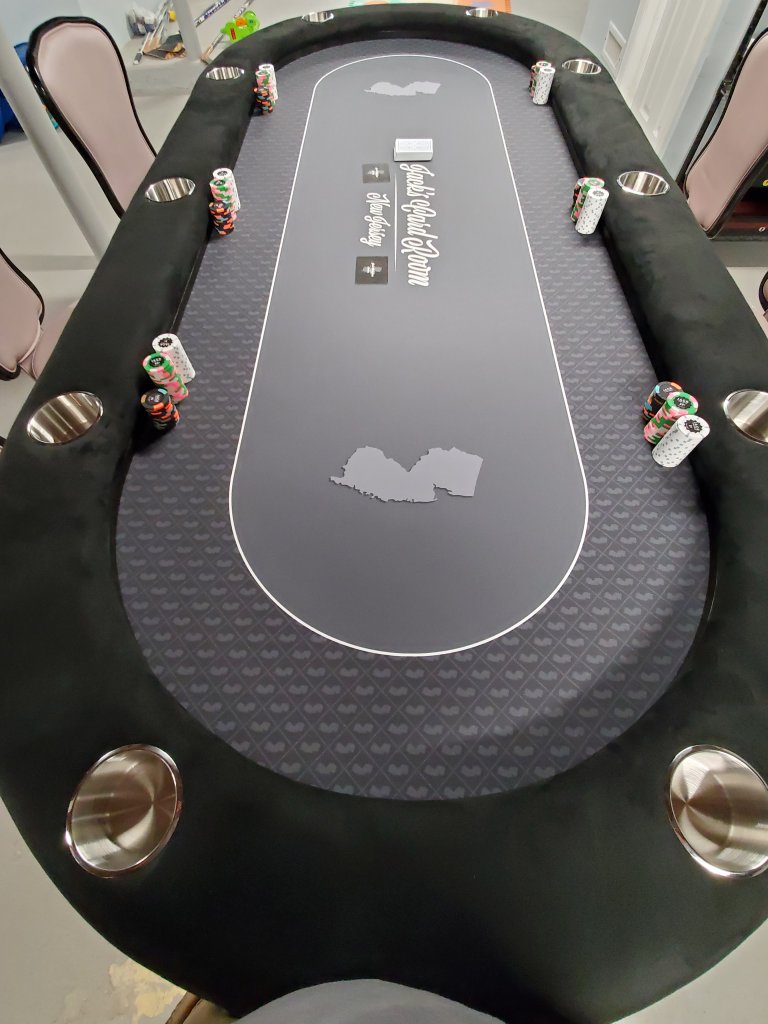 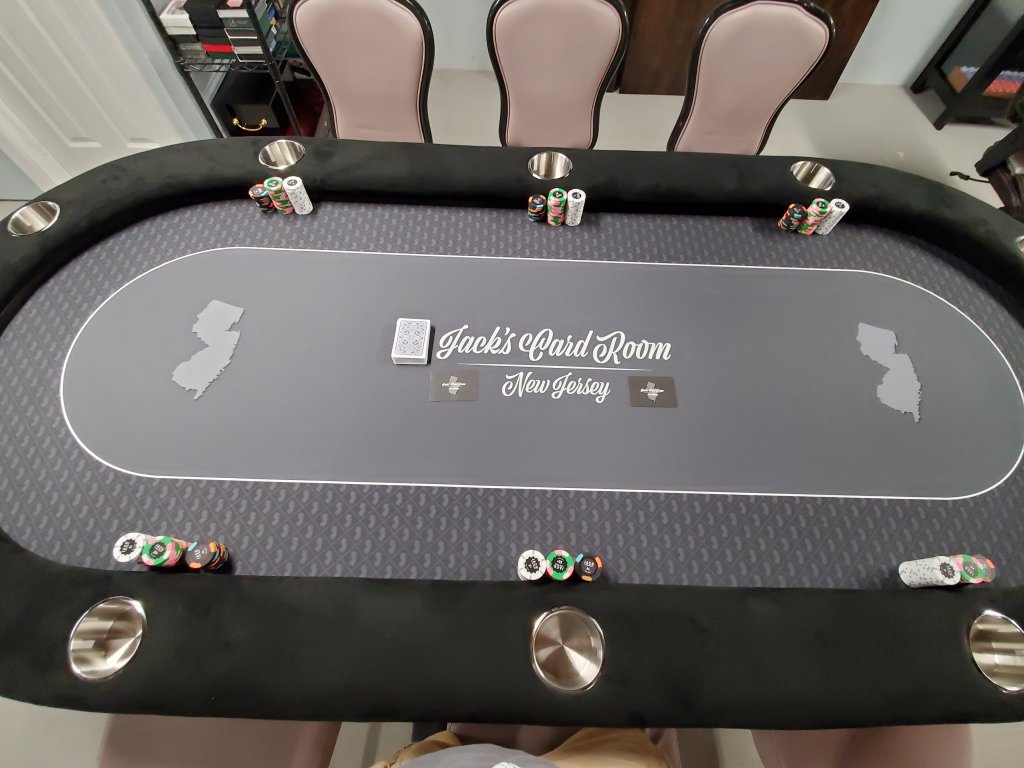 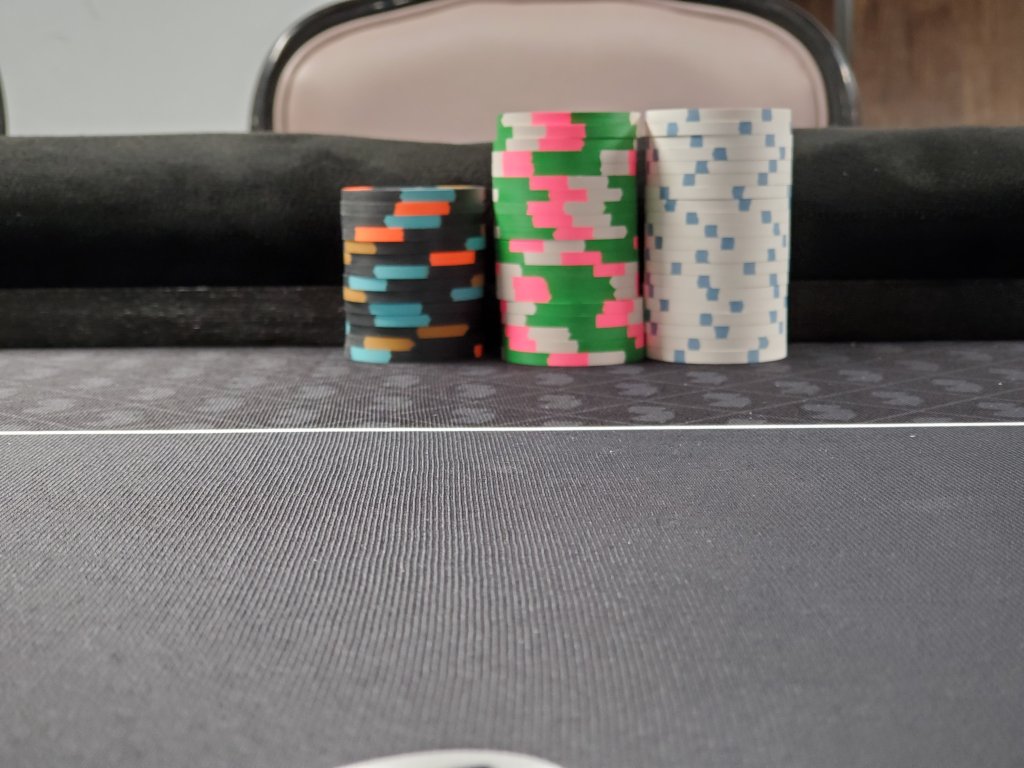 .25/.50 starting stacks. I counted out 5 extra quarters and dollars for each stack by mistake because math is hard 4 beers deep 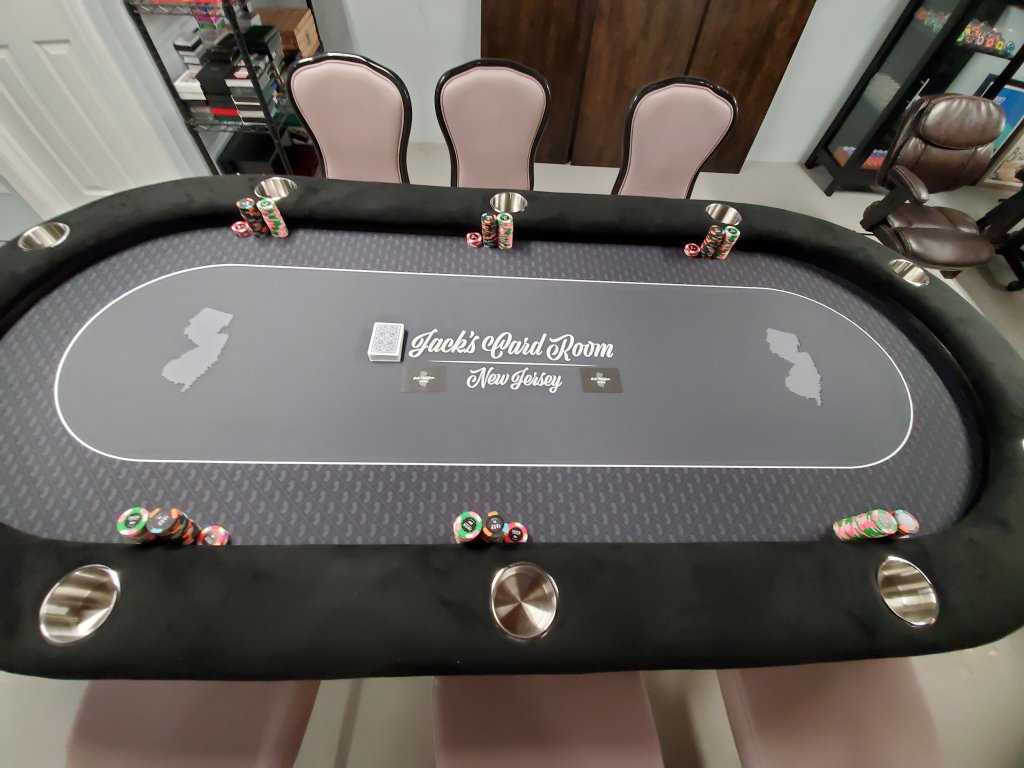 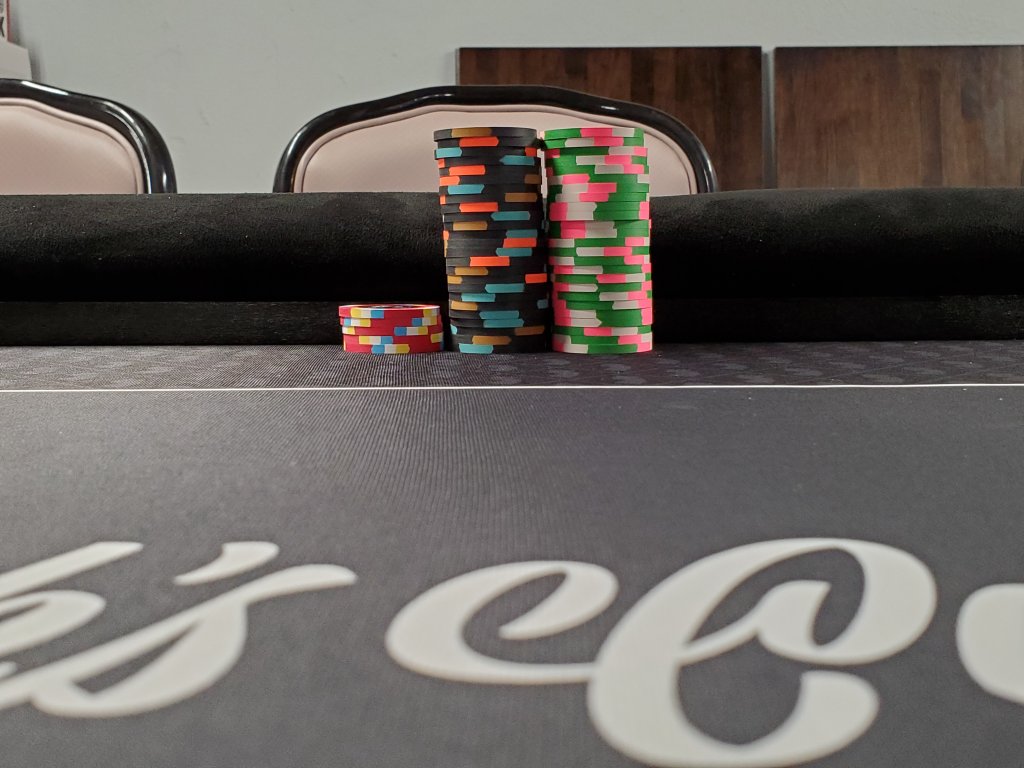 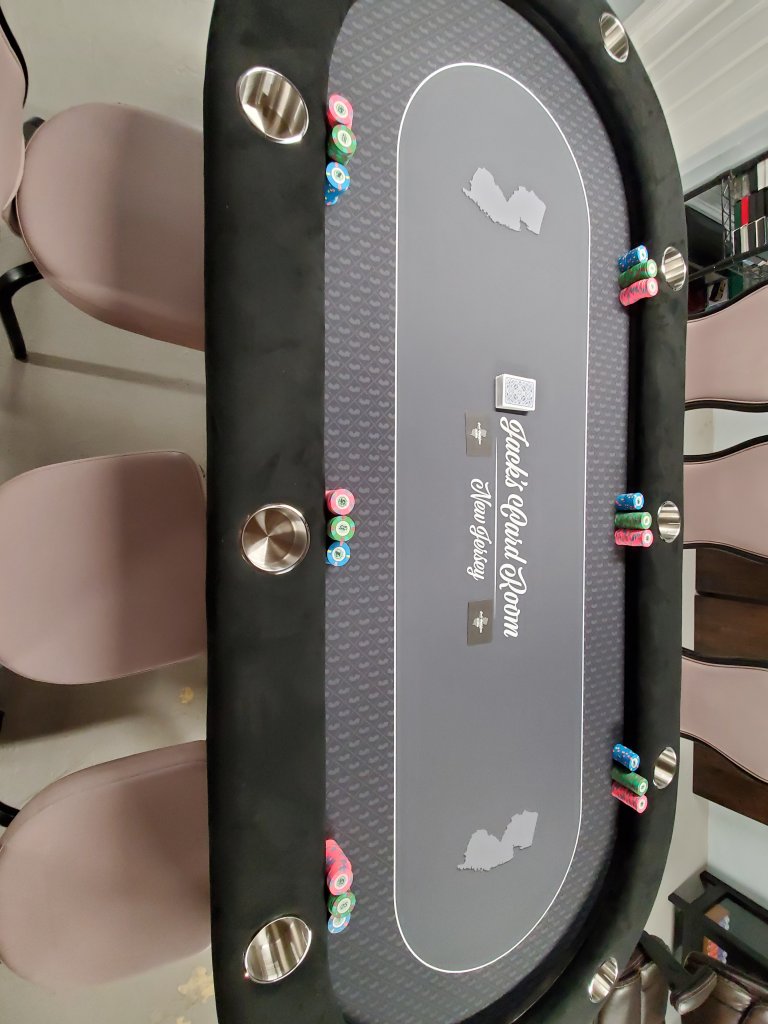 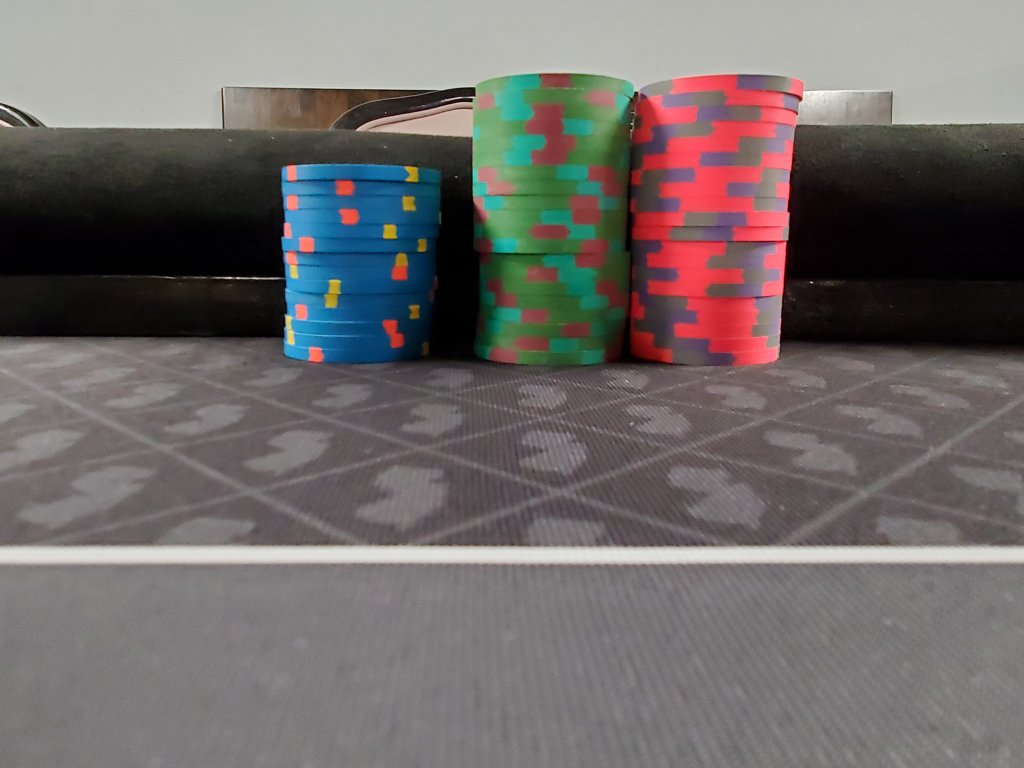 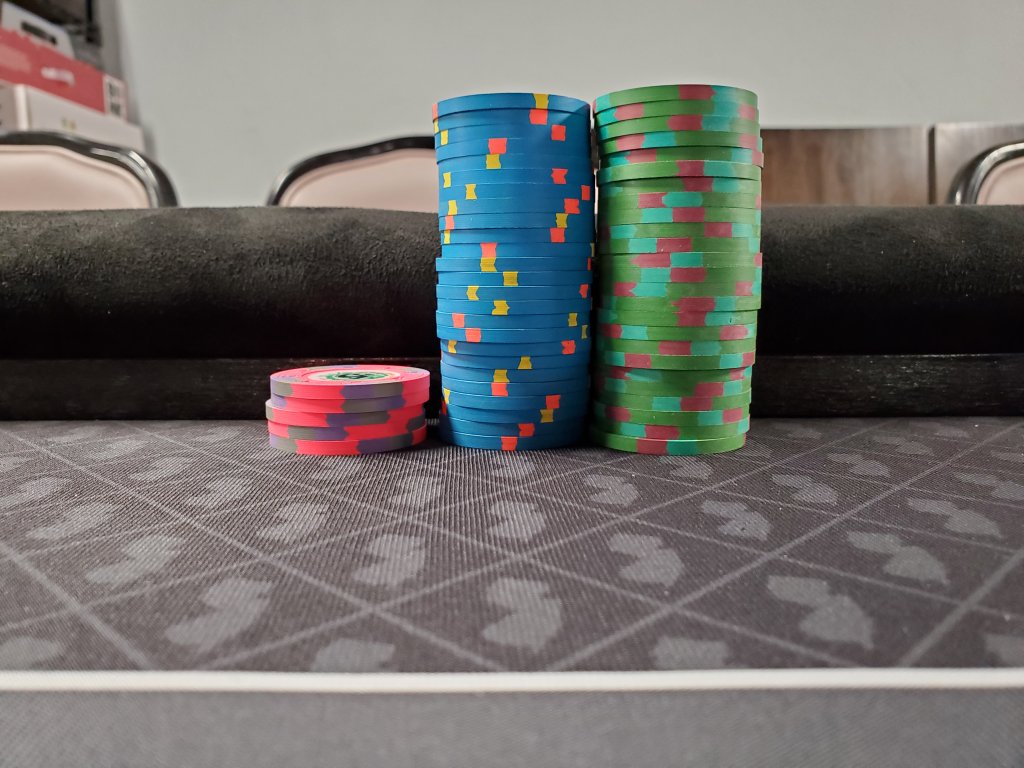 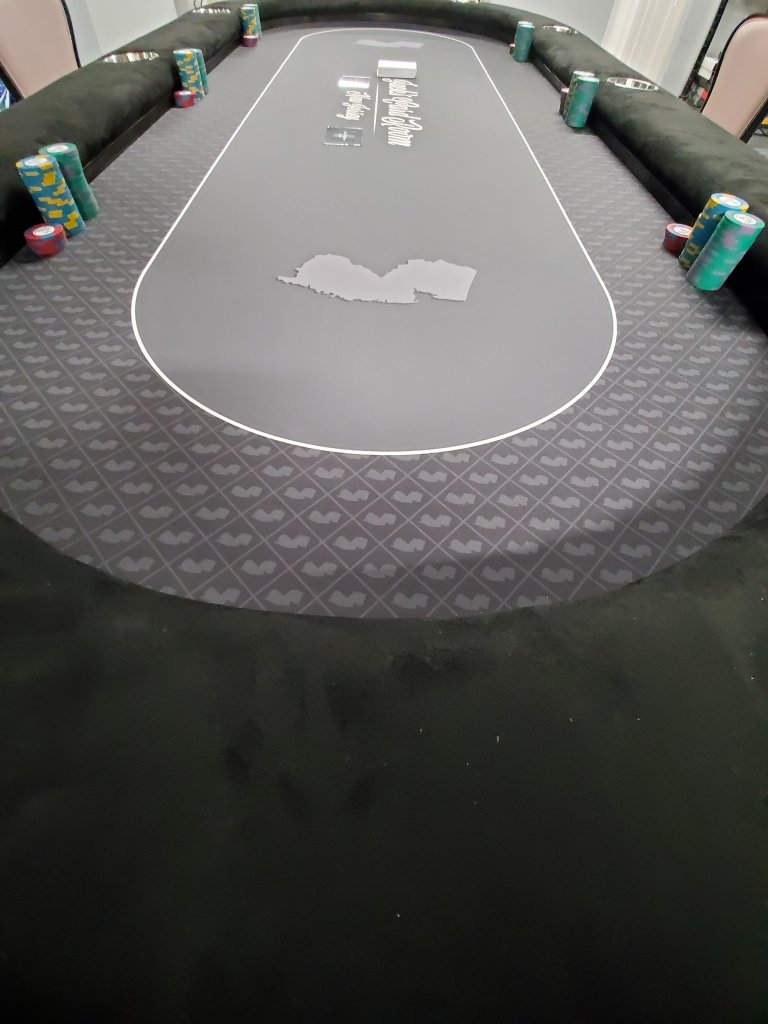 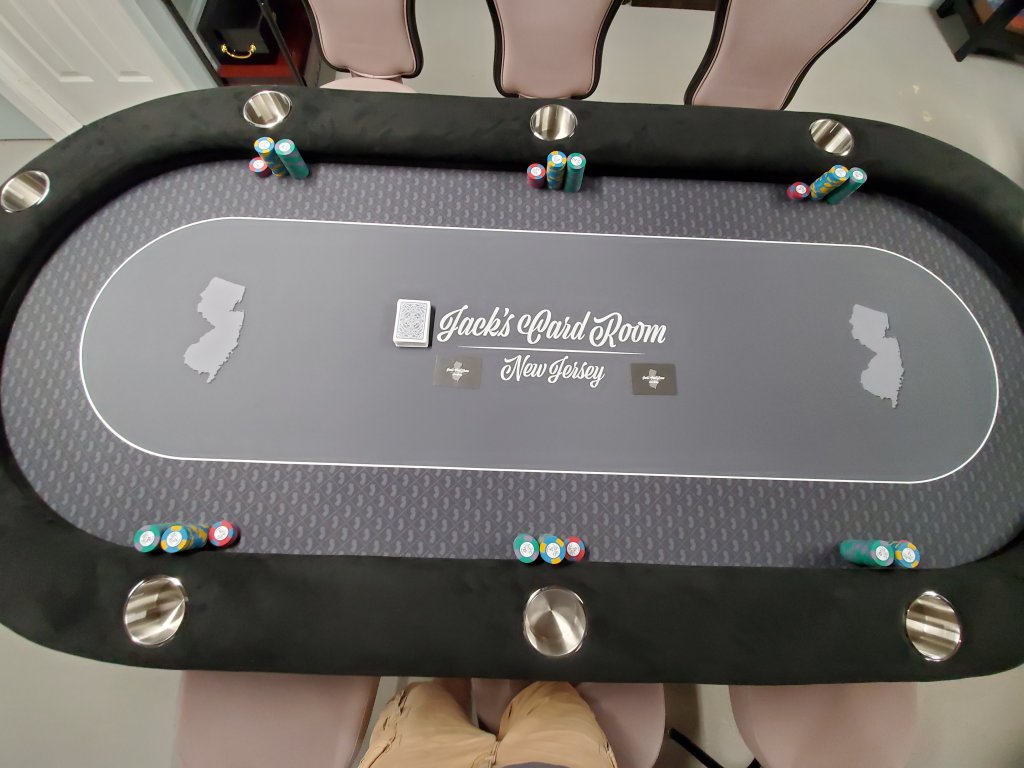 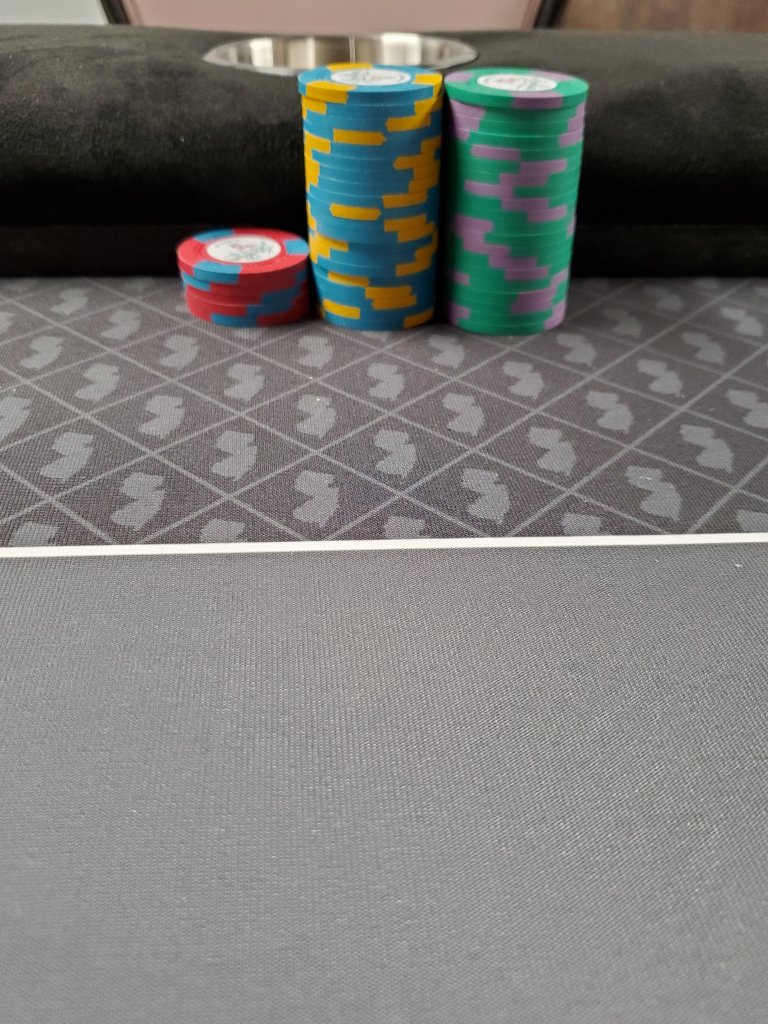 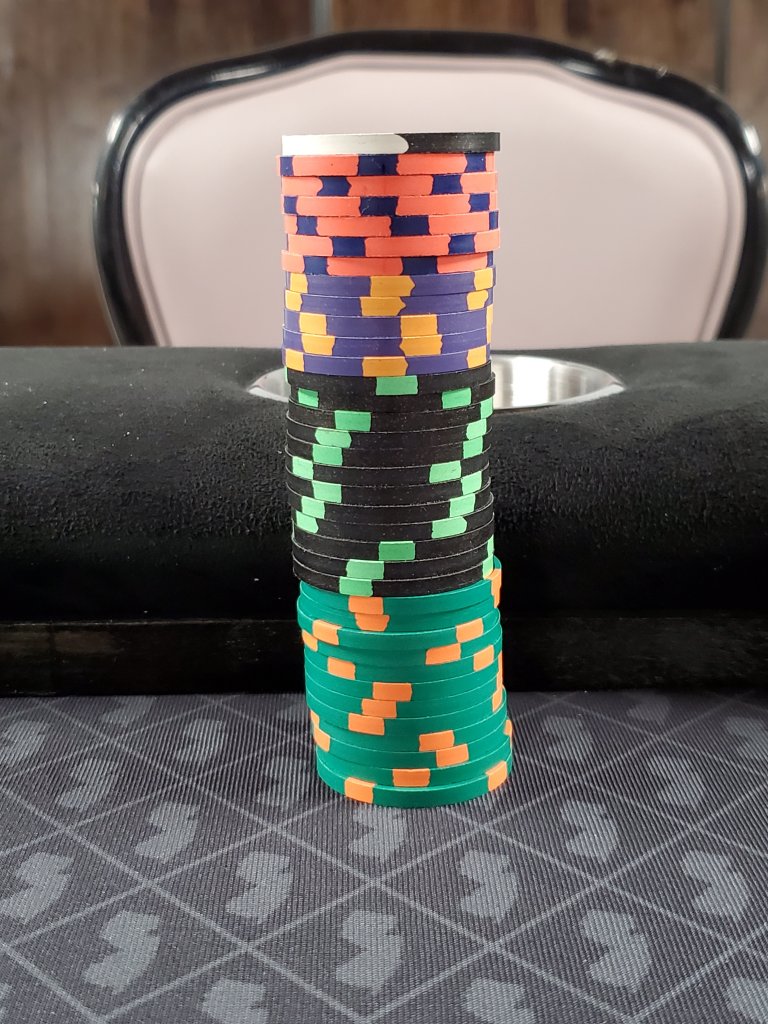 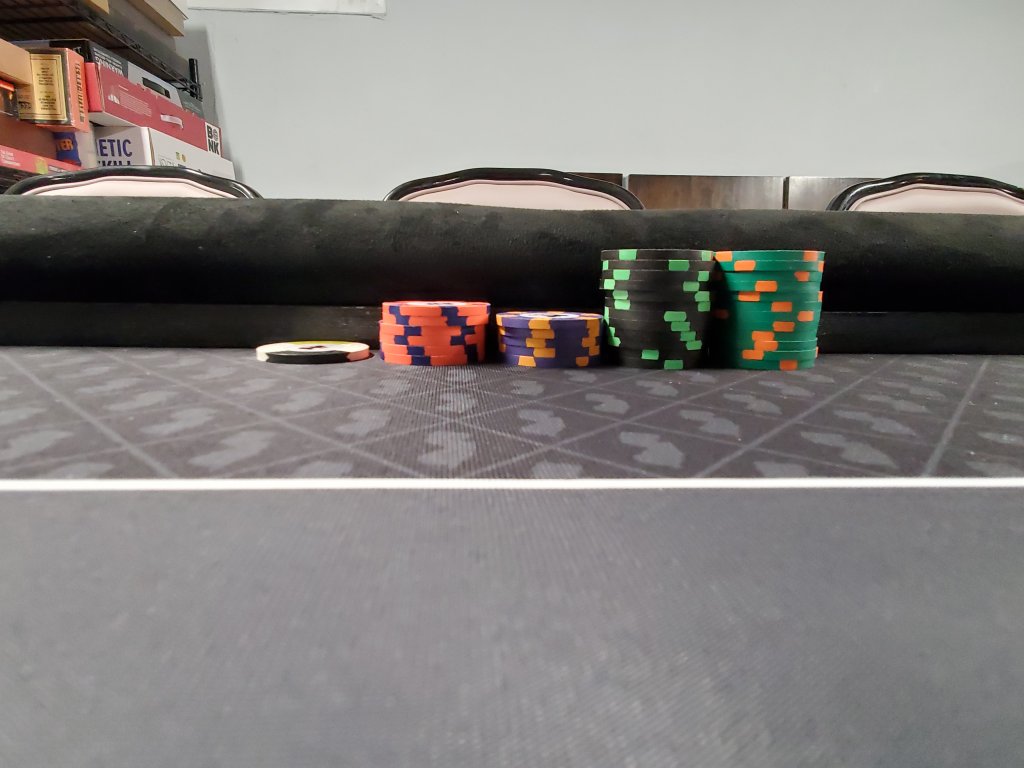 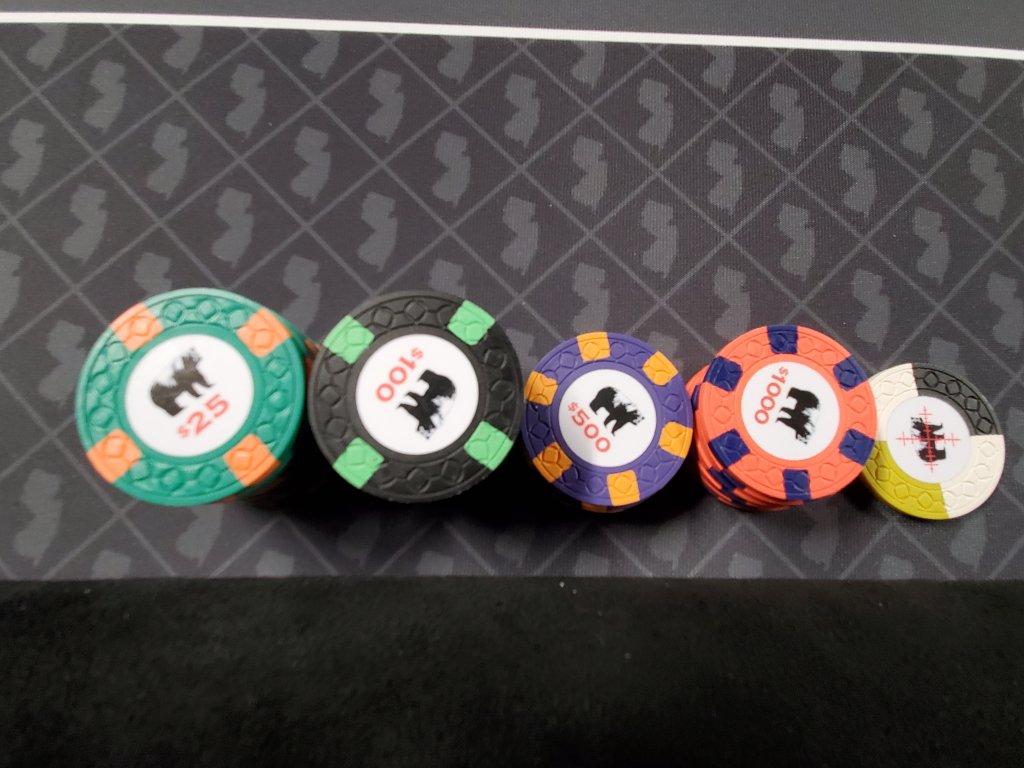 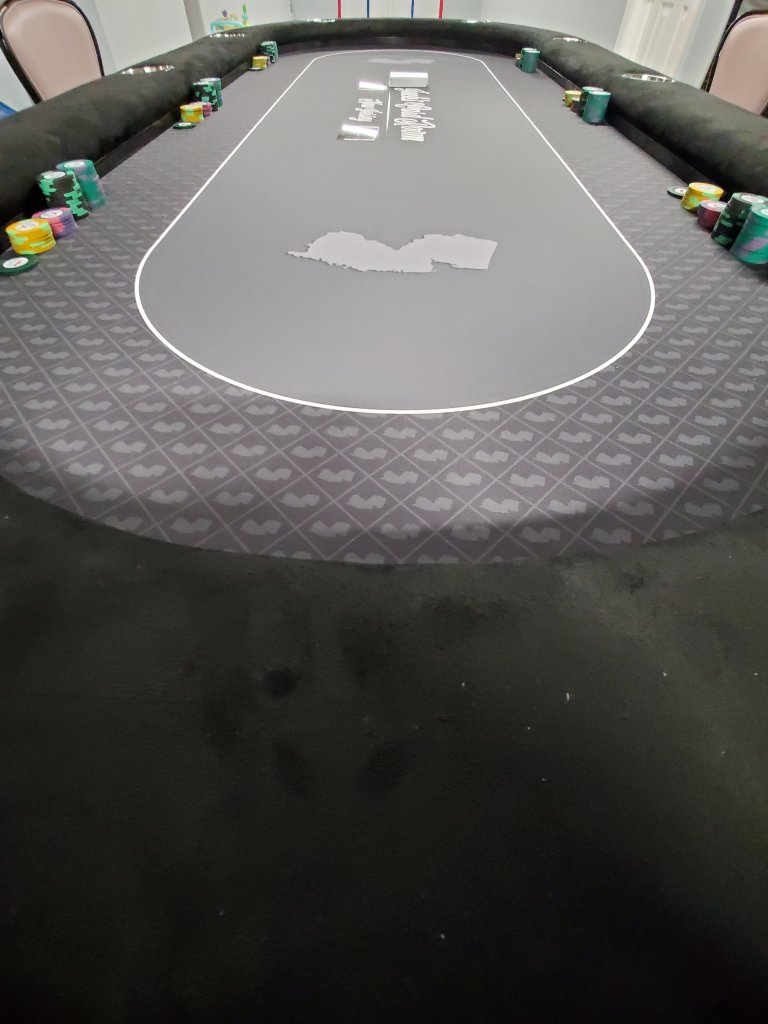 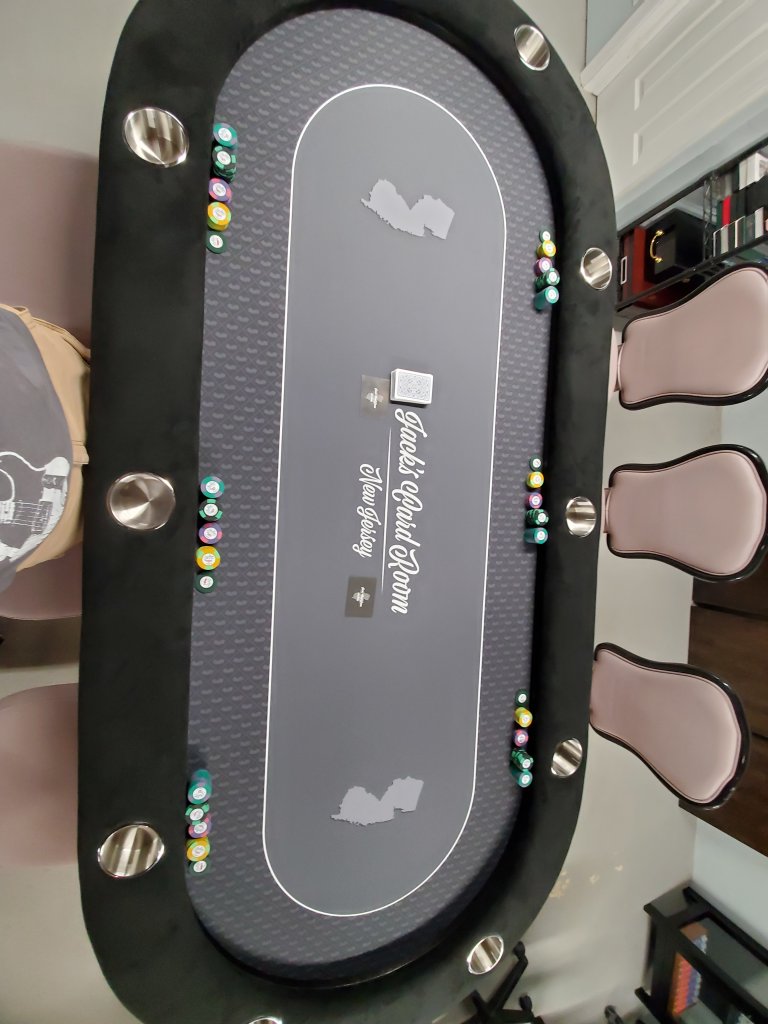 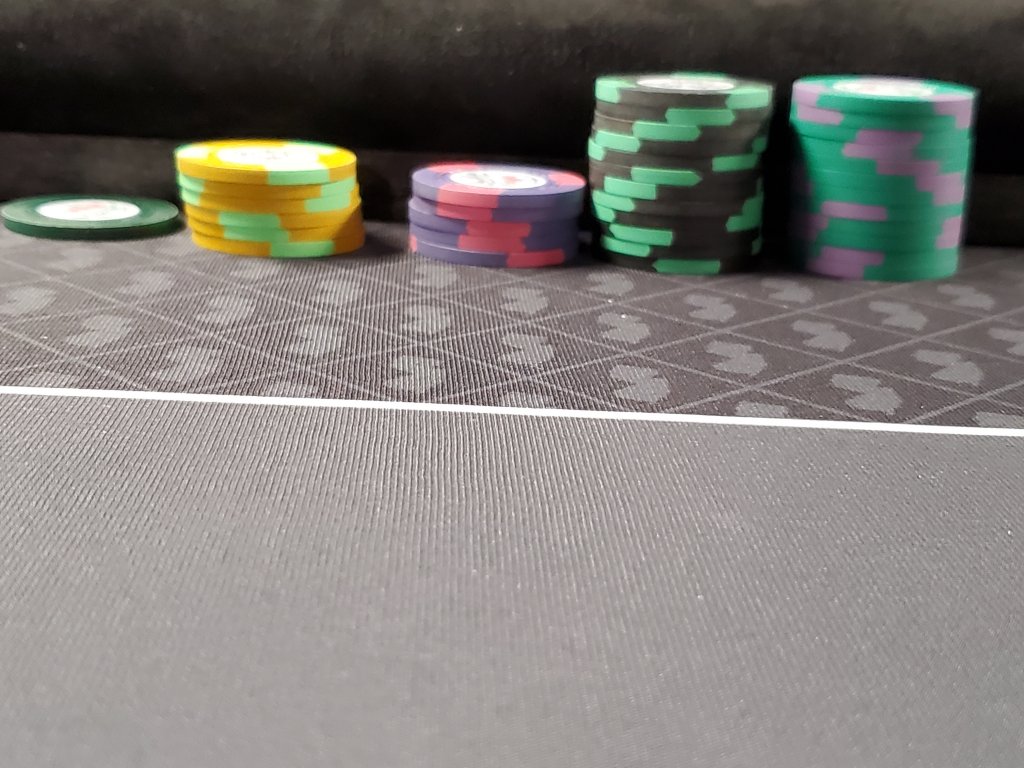 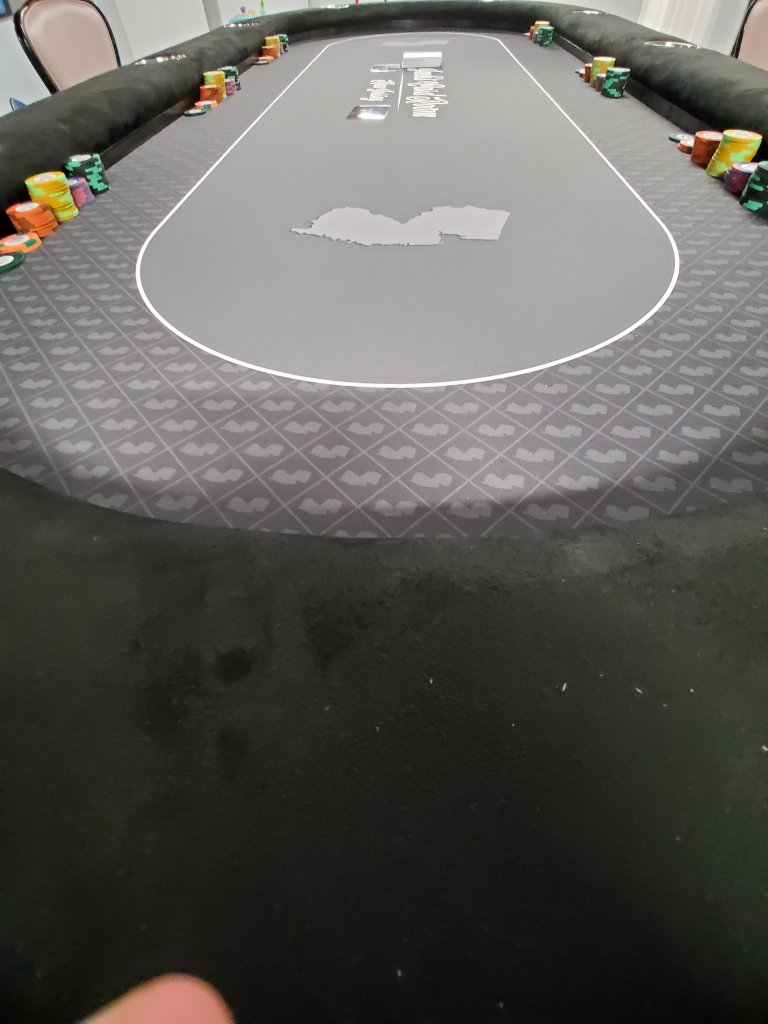 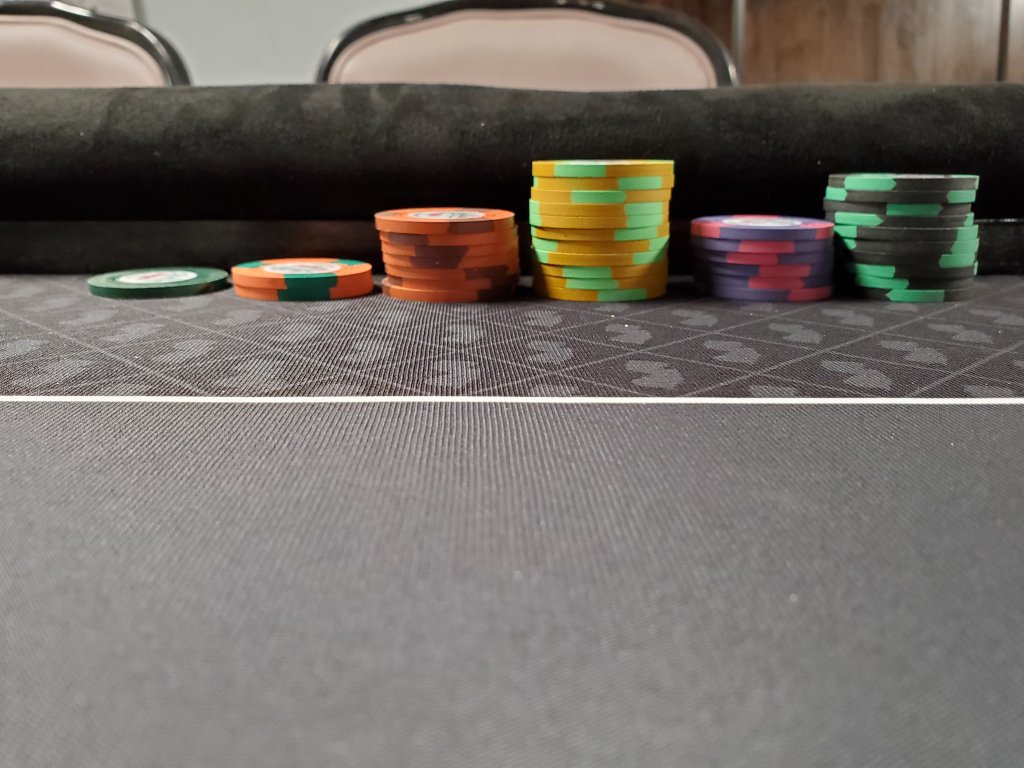 Awesomeness! So what are the three Jack names? I’d throw out the generic guess of Jack, Jacquline of some spelling and Jackson?

BarrieJ3 said:
Awesomeness! So what are the three Jack names? I’d throw out the generic guess of Jack, Jacquline of some spelling and Jackson?
Click to expand...

Awesome table, hoping to see it in person soon.

Awesome! I look forward to seeing how things go! Those are some nice chips! Did you build the table, is it a Chanman table, or something else? It looks great!

Tournament set pron added with what I have now, and definitely more to come!

I am going to have a sale ad out later for anyone who wants any cut cards. I've got some extra!

chipsncoffee said:
Awesome! I look forward to seeing how things go! Those are some nice chips! Did you build the table, is it a Chanman table, or something else? It looks great!
Click to expand...

Table is courtesy of @Irish whom thankfully lives only a few minutes from me and we were able to arrange delivery the day of without much trouble. Quality is awesome and kept me in the loop every step of the way.

Cloth is courtesy of @T_Chan . Nothing compares to his gaming suede. The cards pitch so well when dealt on this surface!

Cloth design and chip inlay and cut card design is courtesy of @timinater . Great to work with and is designing another line of CPC custom inlays (maybe cut cards and buttons too) for me.

Great space, good luck dragging many pots your way on the new table. Looking forward to seeing the 44mm CPCs!

Forgot to post this here yesterday, but cards available here:

Awesome set up. Excited about another place to play. Assuming I’m invited that is.

Based on the name of the card room I was wondering if you had a JACK detroit set. You didn’t disappoint.

I'm doing a dry run in two weeks with my usual crew. I'm finding that it's a really tough sell with some of the guys. I'm limiting cash games to 6 per table (I can run two tables of 6 comfortably close to following social distance protocols but not quite, and a table of 4 doing the same, comfortably but not quite following the 6 foot rule). Masks are going to be compulsory to start out.

sgago84 said:
Awesome set up. Excited about another place to play. Assuming I’m invited that is.
Click to expand...

A PCF game is something that I've pondered, but I'm not sure how keen my wife would be on an eclectic group of people I met on a poker chip website coming into our home with the little one still requiring lots of attention and watchful eyes. I don't want to infringe on @Irish 's awesome game either!

sgago84 said:
Based on the name of the card room I was wondering if you had a JACK detroit set. You didn’t disappoint.
Click to expand...

It was an absolute necessity as soon as I found out there were Jack Casino poker chips available here!

Absolutely awesome @JMC9389 I love it! I also love when the names have a history behind them !

Was either that or craigslist

We'll make it happen when the time is right. I just don't know when that's going to be.

I remember seeing your post in the "Pokers Tables, Seating and Furniture" forum a week or so ago when you picked up those Gassers, @JMC9389. The chairs look great at your table!

Is that a 96-inch table or longer?

Chawks45 said:
I remember seeing your post in the "Pokers Tables, Seating and Furniture" forum a week or so ago when you picked up those Gassers, @JMC9389. The chairs look great at your table!

Thank you! The chairs provide a nice contrast with the rest of the table, I think!

It's exactly an 8 foot long table, yes. Just right for up to 10 players. I usually don't get any more than 8 players on a given night, but if the game ever grows I want to be ready!

Table width is 44 inches, which @Irish recommended over a standard 48 inches. I feel good about that decision. There's no need for the table to be wider than it is. I'm 5'6", so a wider table would likely need for me to stand up on a consistent basis to push pots to the middle of the table and to deal the community cards. I can stay seated to do both on this table, which I and my short arms appreciate!

JMC9389 said:
Thank you! The chairs provide a nice contrast with the rest of the table, I think!
Click to expand...

You're quite welcome! And I agree on the contrast. I think the color of your Gassers have a really nice pop at that table.

Let's make this interactive! Poll added! Which card set up should I use for Sunday's game?
R

Fournier 2800 cards get the nod tonight per the poll results! 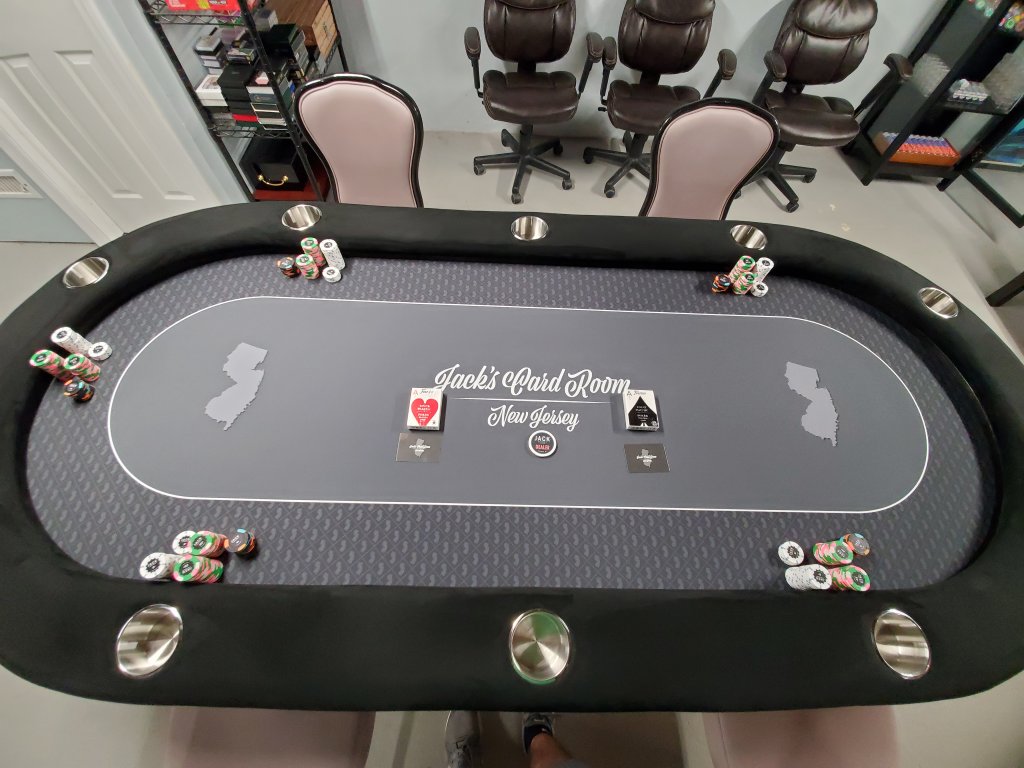 The Fournier's and Jacks brought me some luck tonight. In for $20 and out for $46. High hand of the night was quad 6's. The eventual hand winner went all in after the turn and made villain spew over half of his starting stack from his Ace 2 holdings. Villain was on tilt after that and I rivered a straight two hands later for the rest of his stack 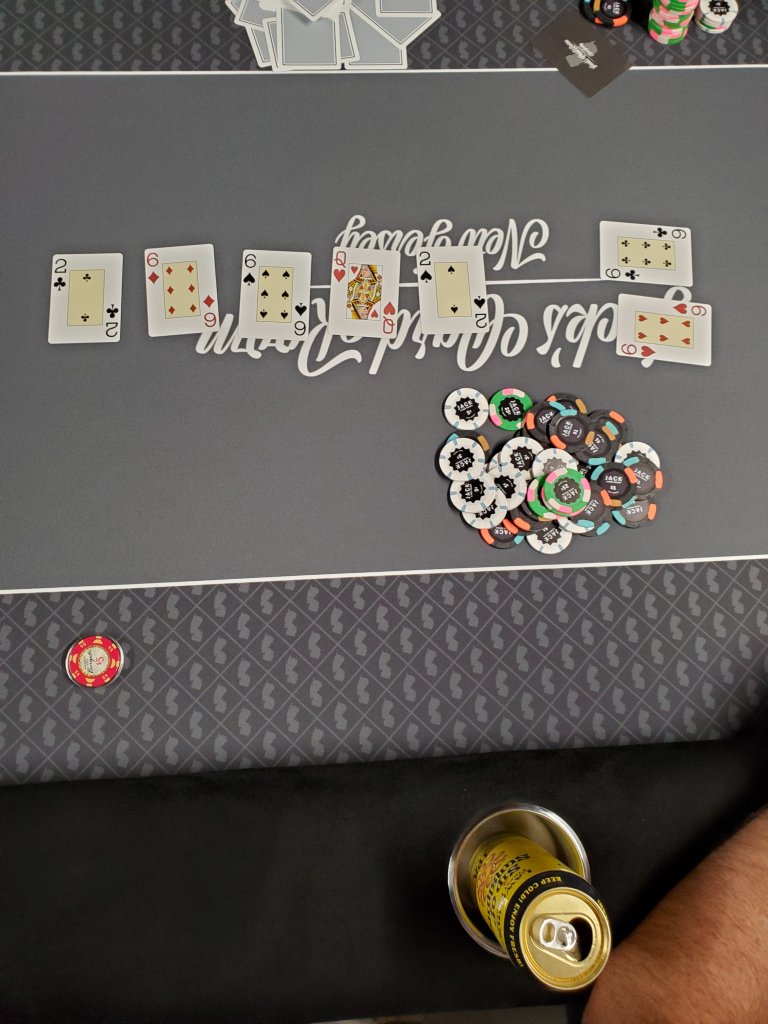 Playing with masks was not at all cumbersome. The guys were good about stepping away from the table if they wanted a snack and with washing hands. Was a very successful first night back! I'm looking forward to hosting a tournament two weeks from now as long as COVID doesn't skyrocket in the area by then. Chips are TBD, but as long as a special delivery comes in as scheduled, I'll have a surprise for you guys and for my players as well!

Help! Does anyone know how to remove a poll?

You must log in or register to reply here.
Top Bottom