Finally had a few hours to put on the final touches. Cup holders and chiptray. Few notes about the table: I HATE racetrack tables. I HATE drinks at the table. Especially ON it. But the people have spoken. I’m gonna give them their wishes this time around. I just had to build it so when shit happens, it won’t be a total disaster.
the legs aren’t fastened and are just better than using the horses. So that why they aren’t straight. Total time in this is probably about 30 hours or so. Using sunny days and a stretch of really warm weather to get the dusty stuff done. The rail used a really neat vinyl that was TERRIBLE to work with. It took 11 hours on its own to do properly. Parallel lines were a bad idea and made getting them to run straight meant it had to be done 3 times to get right. 1500 staples later...
The felt is a nice, heavy suede with an unusually thin 1/8 Valora. I’ve found it gives enough give to allow the cards to pop up. I chose this for two reasons: 1) we have two tables with 1/4” and chips bounce and roll just a little too much for my liking. 2) the biggest factor, I didn’t really want a 1/4” difference between the track and the playing surface.
Anyways. I can’t tell you how happy I am this is over. I don’t think I’d have started it if I knew it was going to be such a pain. 1st track build and my last. 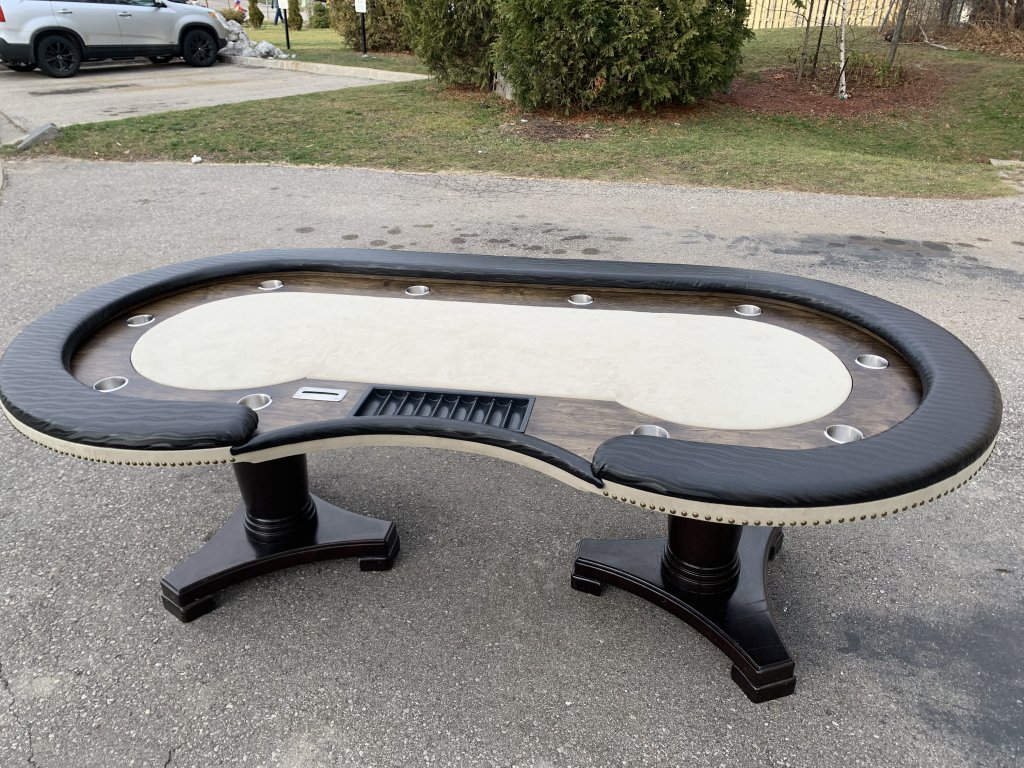 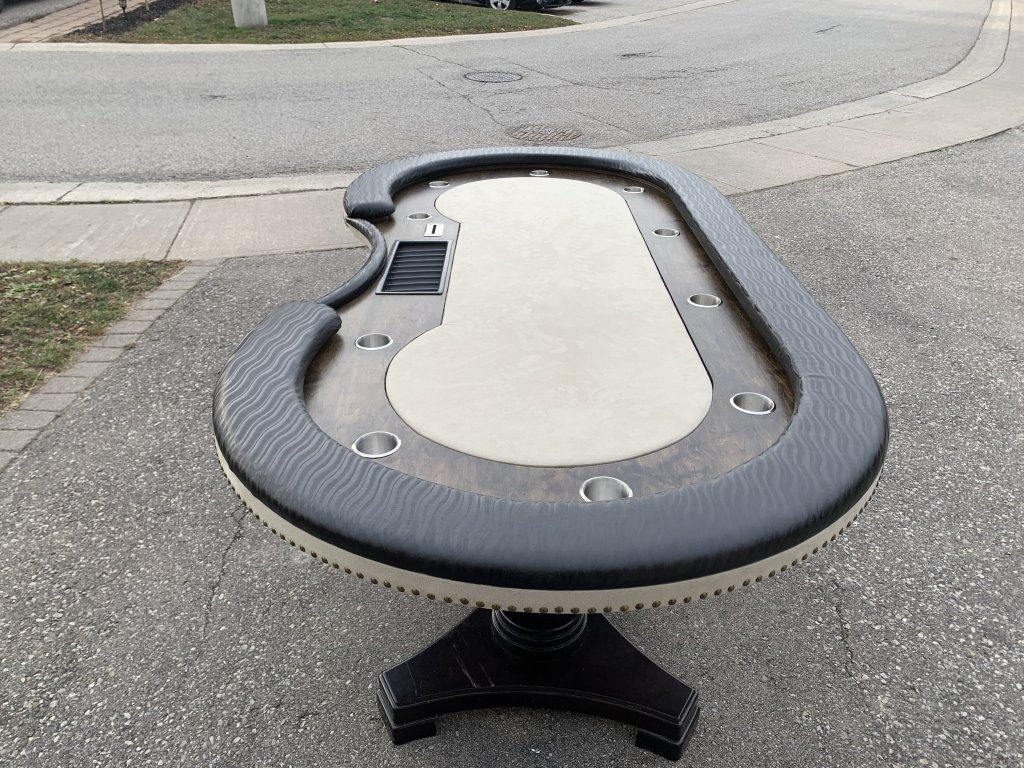 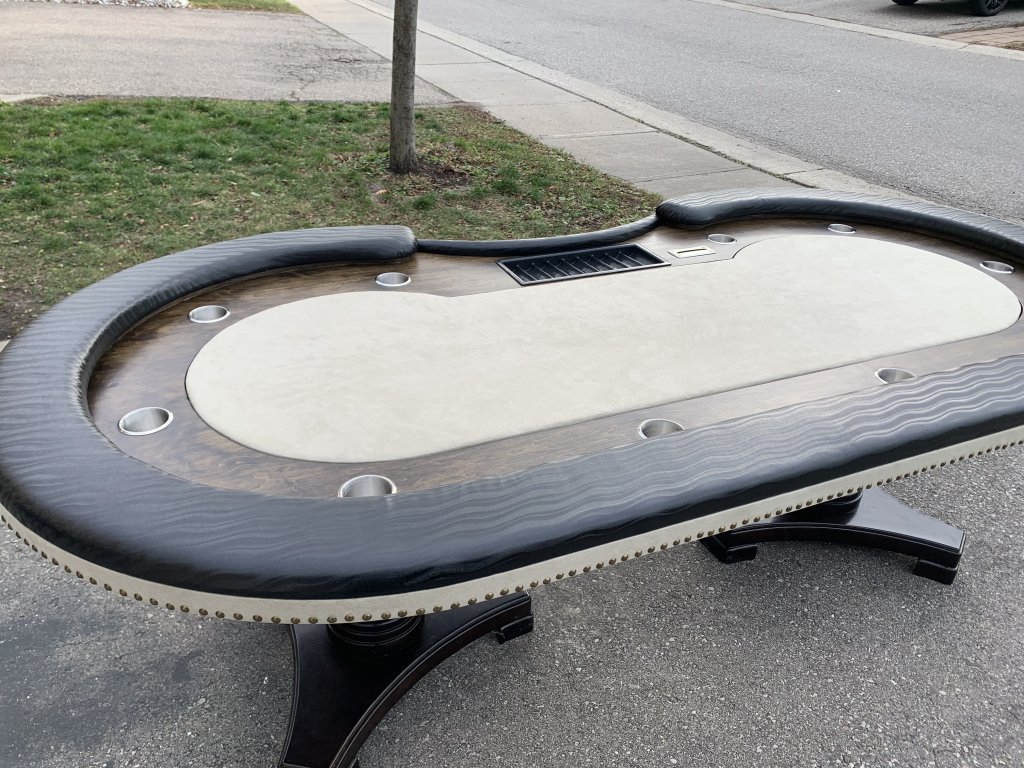 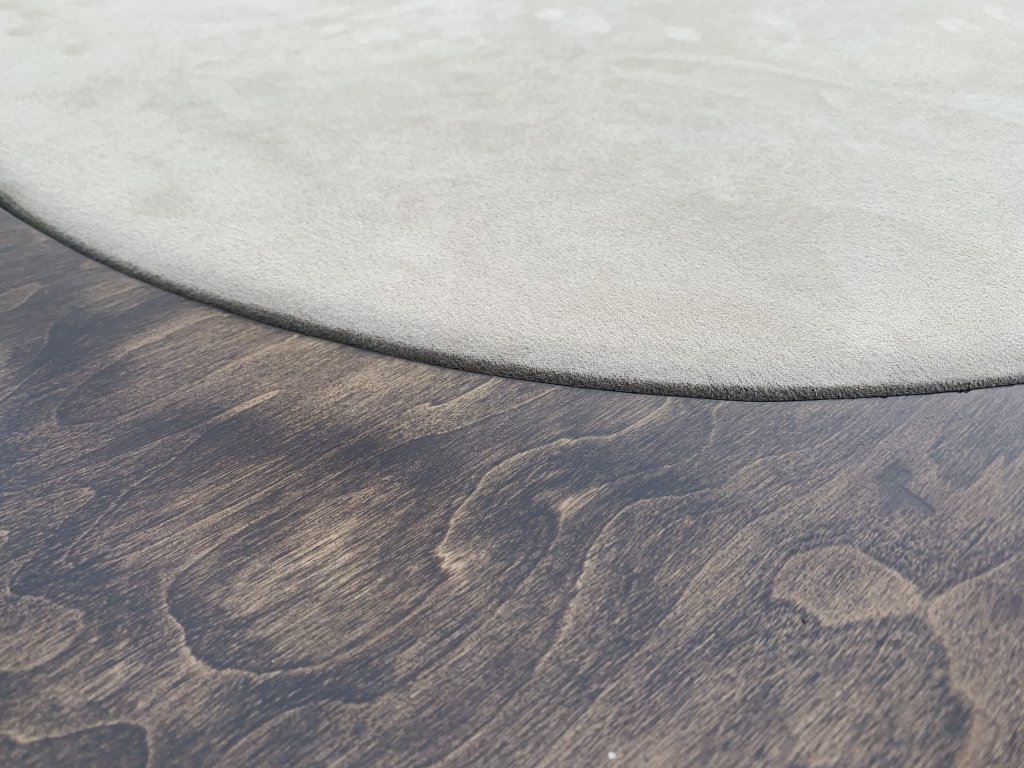 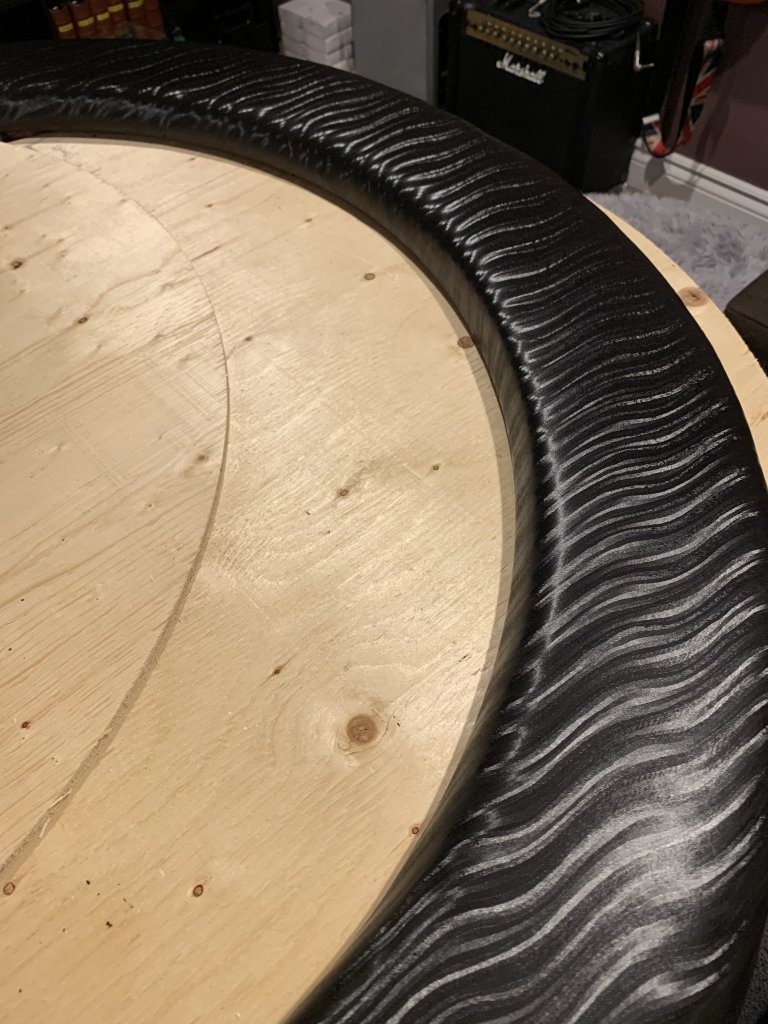 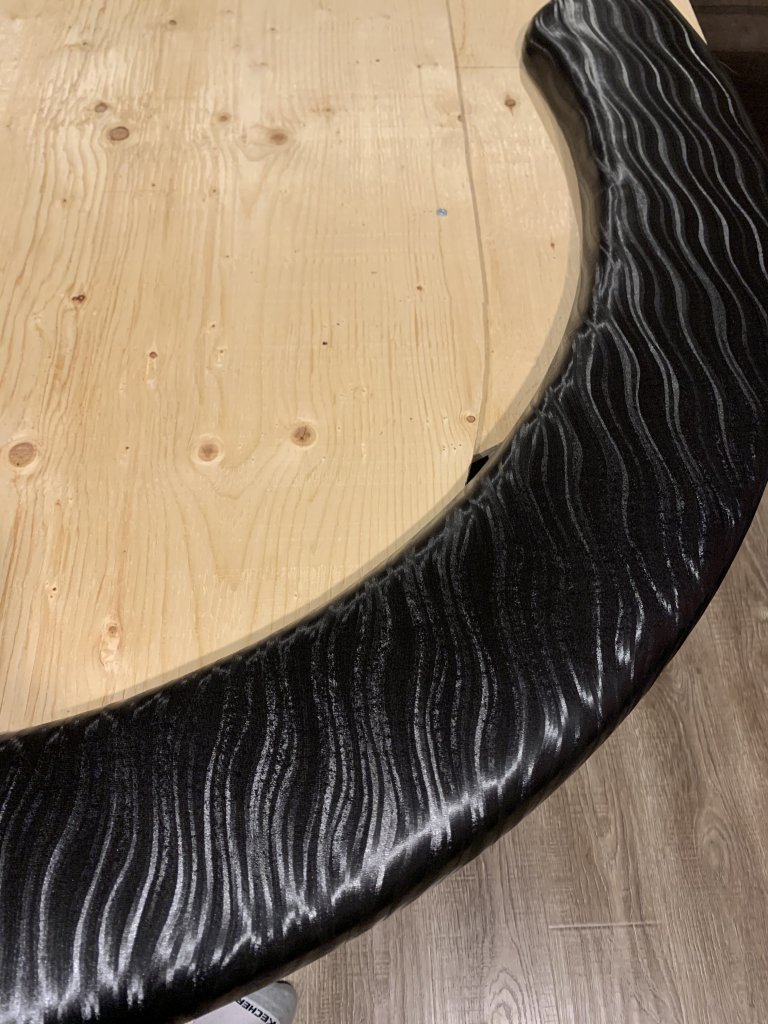 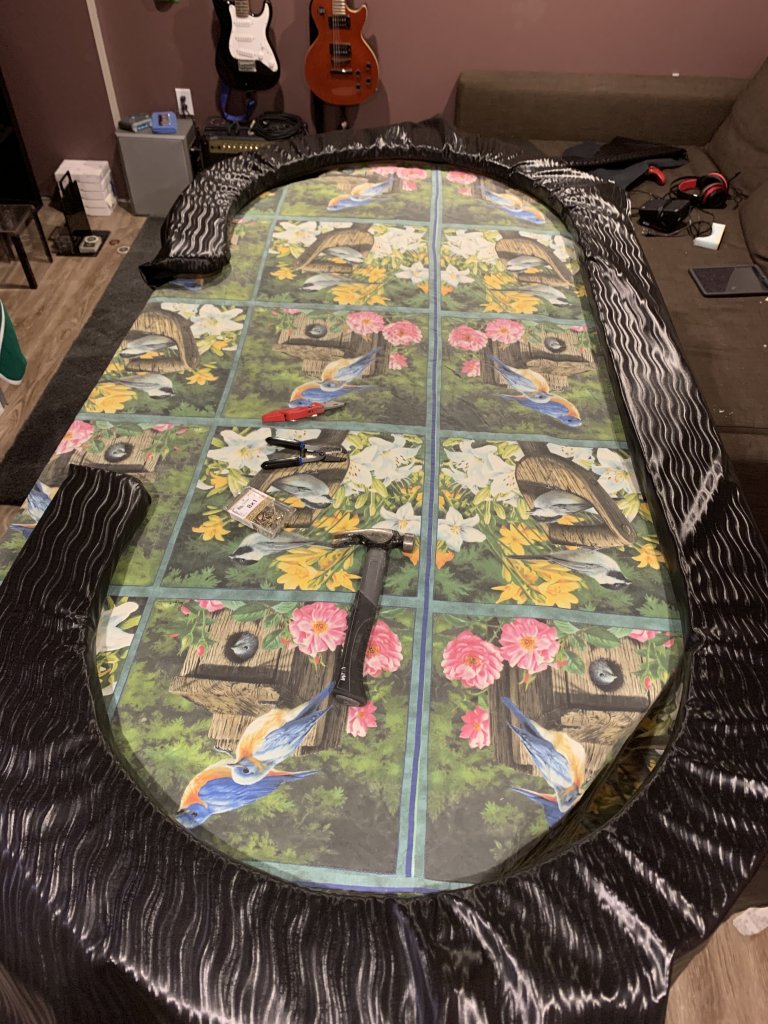 Thanks, Pat. Looking at these pics made me remember. I also need to straighten some of the tacks...don’t do the tacks in low light...

Great looking table. I'm pretty sure this is a lot of peoples' "Dream Table" - "Racetrack with cup holders?!?! I'm All-In!!!"

I used to laugh in my head that racetrack tables weren't just annoying to play on, they were harder to build as well. Your story has made me cry a little in my head.

But, it is beautiful, and with a dedicated dealer, most of the drawbacks of a racetrack and cupholders are lessened - except for the damned clacking.

I hate racetrack builds (experience being the first one we built) but if I have to play on one, dropped cupholders is the way to go, so you might've shot yourself in the foot if you wanted to prove it would be a mess to play on

In any case, you executed this to perfection, and even though the rail was a pain, I wouldn't look at this feeling anything other than pride if I were you.

At first glance I thought the birdies might be your felt! Looks great Steve!!

This table came out beautiful. I normally don’t like race tracks but this one looks great. What are the specs of the table?

Great looking table Steve. I’m not a fan of racetrack tables either, but that one is classy!

As with everything you put your mind to Steve, absolute perfection!! I am a fan of race track tables, this is by far the nicest I have seen!

I was lucky enough to see pics in the process of building! That silver rail material was literally made for you!!

Prestigious as hell, and hope someday Brie and I can play a game on this beauty!!

FordPickup92 said:
At first glance I thought the birdies might be your felt! Looks great Steve!!
Click to expand...

Buge said:
This table came out beautiful. I normally don’t like race tracks but this one looks great. What are the specs of the table?
Click to expand...

I’m still thinking it needs a @T_Chan Chanman felt. Really need to get myself a Christmas present.
L

Looks Great!!
You must log in or register to reply here.