The Bank Tournament (CPC) - The end of my chipping journey ? (1 Viewer)

As I mostly host (and play) tournaments, and my first love of real poker chips were hotstamp, when I pulled the trigger about 3 1/2 months ago for a CPC hotstamp tournament set, I asked myself if with this set, I would get the perfect set for me so that I could consider my chipping journey achieved ? When I got it about 2 weeks ago, I'm almost certain the answer is yes.

Also, when I got my set, I rethought about my chipping entire chipping journey and before posting chips of my new CPC set, I also want to share this throwback with you.

When I think about it, I've even started with chips that are maybe worse than dice chips. Yes, it's possible. This was the first set I bought back around end of 2006 ! I was still a student at that time and we were playing 5 EUR tournements. I used this set a lot. Later in 2007, I switched to the (un-)famous Dice chips that we could find in every shop since the Poker boom. I used these for maybe 2 years and then switched to the also (un-)famous "Laser Las Vegas". I did not kept these a lot of time since someone found these so cool and wanted these. I sold them to that guy and bought Monte Carlo chips. Still slugged but these were in another league compared to all the chips I had in the past. We are now in 2010.

I played with them for several years until my first visit at @Spinettis Gaming in 2014. It was not my first trip to Vegas but the first time I went at Spinettis. I went out of the shop with a Dunes Commemorative set. The ones that are more or less similar to the "nexgen" / "progen" / ... I found these so cool due to the fact that they did not have a metal insert.

I've played with these for 1 year and half. In fact, until I discovered that it was possible to have "replicas" from the WSOP chips. When I saw these, I ordered them at the defunct website "MrChip" and started to get an interest in high quality poker chips. The big reveal for me was that it was possible to acquire actual chips that were used in casino and saw hotstamp chips for the first time. I found them so nice and so old-school. As I did not have a cash set, I decided to build one around hotstamp chips I could find at the time. At its peak, this mixed set was like this.

The chips I loved the most in this set were the The Post and the Silver Star. Unfortunately, one day before I pulled the trigger at Spinettis when they were in abundance at $1 a chip, someone bought almost all of them. It's my biggest deception in my chipping journey. Worst than having refused a BCC Protégé set at 1.30€ each, a ASM "Hacienda" tourney set at 350 EUR / 600 chips or a full Paulson Classic set around 1.3€ each. So I kept the The Post and Silver Star I had and build a 6-max cash set around these. I consider it finished but if I can find 2 more barrels of The Post $5, it would then be perfectly finished.

I've started also to try different things, China Clay (which allowed to meet @Apache in person during one of my trip in Vegas), ceramics, RHC, 36mm chips, ... before trying to create custom sets. I took it as a challenge as I started learning vector drawing from scratch in order to create my own customs. I found the idea of creating my own custom chips so cool that I've almost sold all the other sets I accumulated. Most of my custom sets are made by @SUN-FLY Poker Chips except a Paulson THC set that have been milled and semi-customized with @Gear labels.

So, in the end, I had in my hands, all my custom sets, my Monte Carlo set I still have, my The Post - Silver Star set, a Nevada Jacks heads-up set from @ABC Gifts and Awards and my Paulson THC semi-custom set.

I have enough sets for my monthly game but still, I really wanted a hotstamp (my favourite type of chips) tournament (what I play and host the most) set. I've then started to design it around a theme that grew on me while designing my previous custom sets.

The theme is at the beginning a tribute to the The Post. The Bank, as The Post, is still an important building you'l find in almost all town, both names are short but also, as I've spent my entire career in the world of finance, this theme speaks to me.

For the logo, I decided something visual, that would render nicely as a hotstamp and not just text. I decided to make it a bull, like the charging bull of New York, the symbol of the reslilience of the financial system. I made a first version of the vector but asked to @Johnny5 to adapt it so that it'll render perfectly as a hotstamp.

I've also to thank @raynmanas who understood what I liked in terms of colors and drove me in the right direction to create what I think is a cohesive set. I then slept on the project for a couple of months and went back to it in Feb. I still liked it. A lot ! So I pulled the trigger and here's the result. I'm super happy and would highly recommend CPC & @David Spragg !

Note : for the mold, I decided to go with one that appealed me the most visually. I've not tried all mold but I like how it feel and sound so much that I do not regret my choice !

For the breakdown, I decided to go with a set that can cover T100 freezeout tournaments, 10 players, with 300BB starting stacks.

It's true that if I would have directly started with this set, it would have saved me some $ but I would miss so much and mostly all the nice people I've met during my journey, online and irl. Some of them because regulars at my game and even friends.

It's so true that the journey is more important than the arrival. So after this quite long introduction, I'll post pics of my CPC set in the next posts.
Last edited: Jul 22, 2022 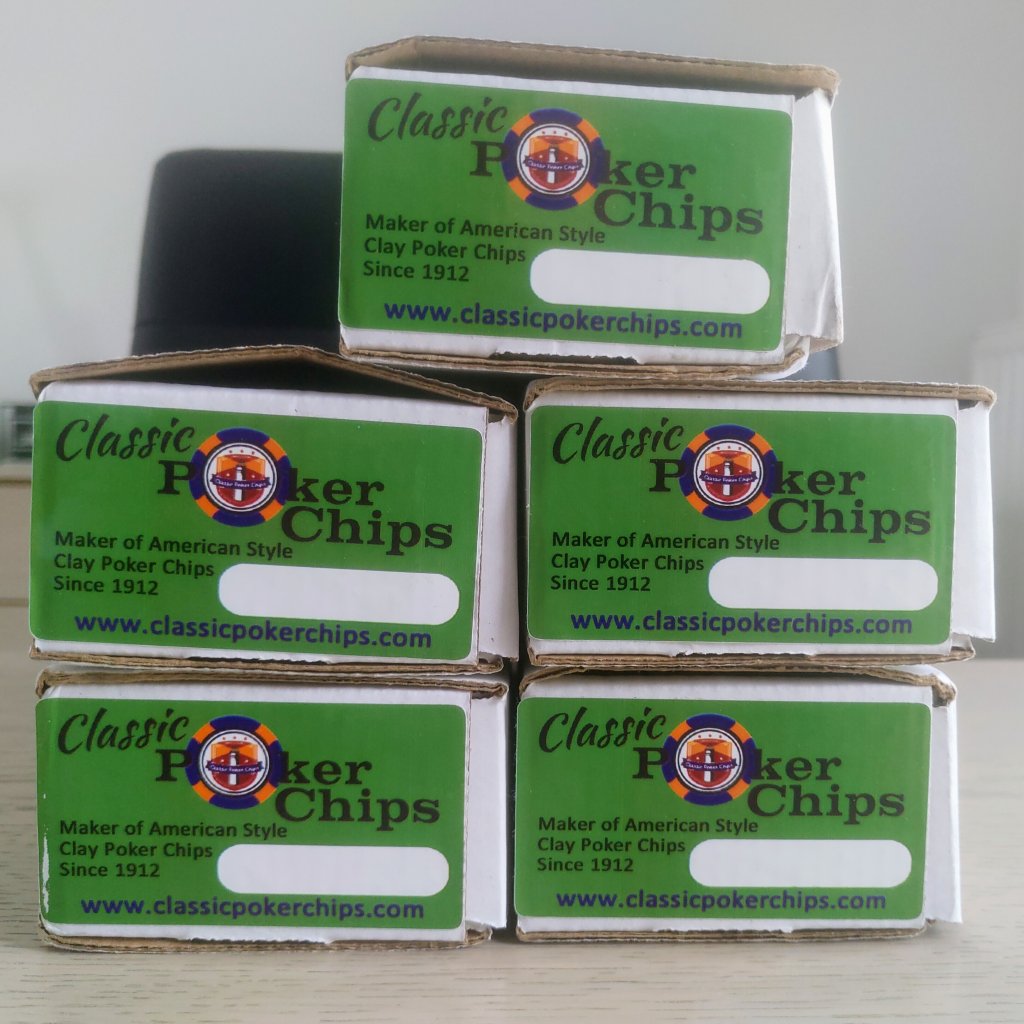 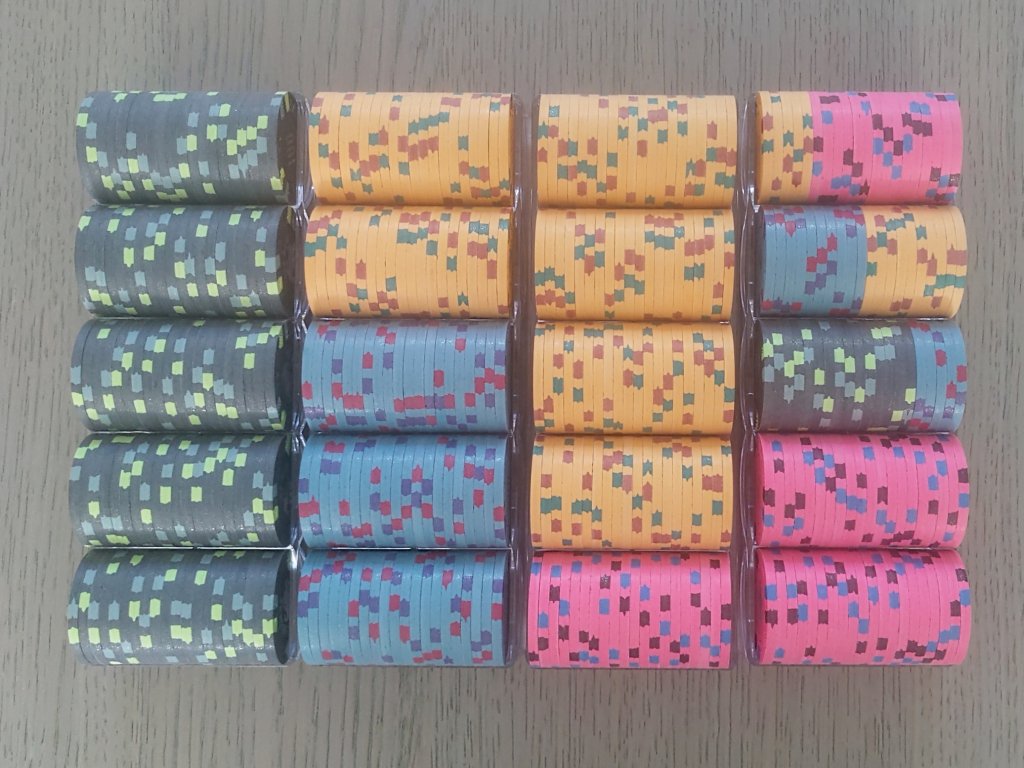 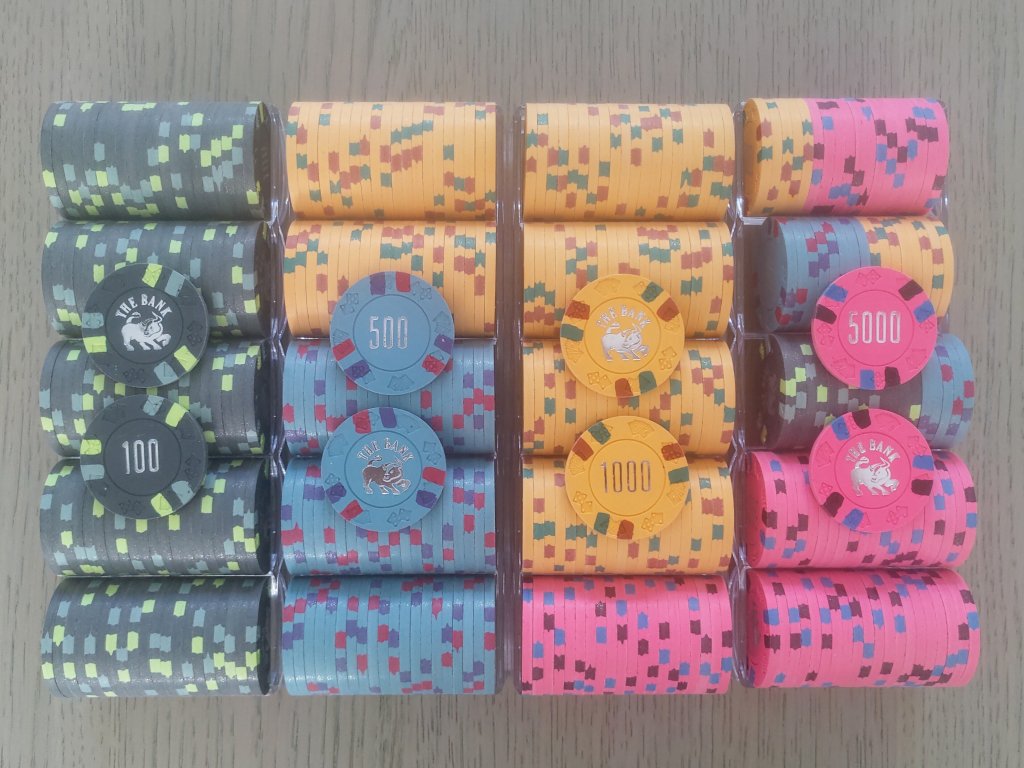 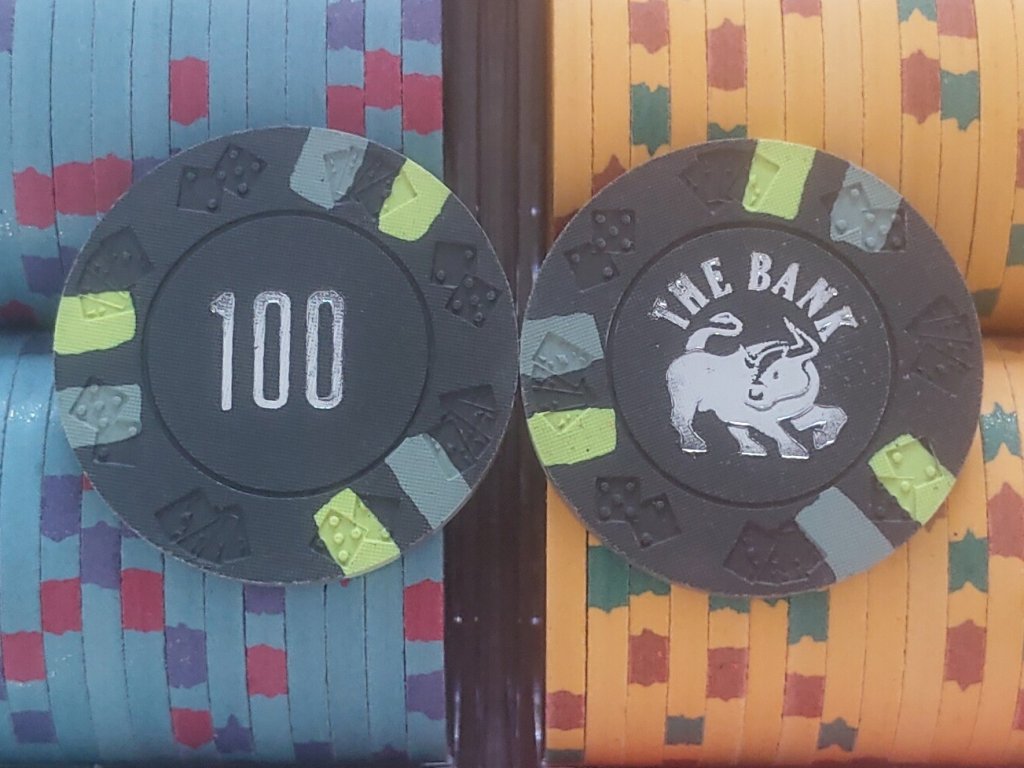 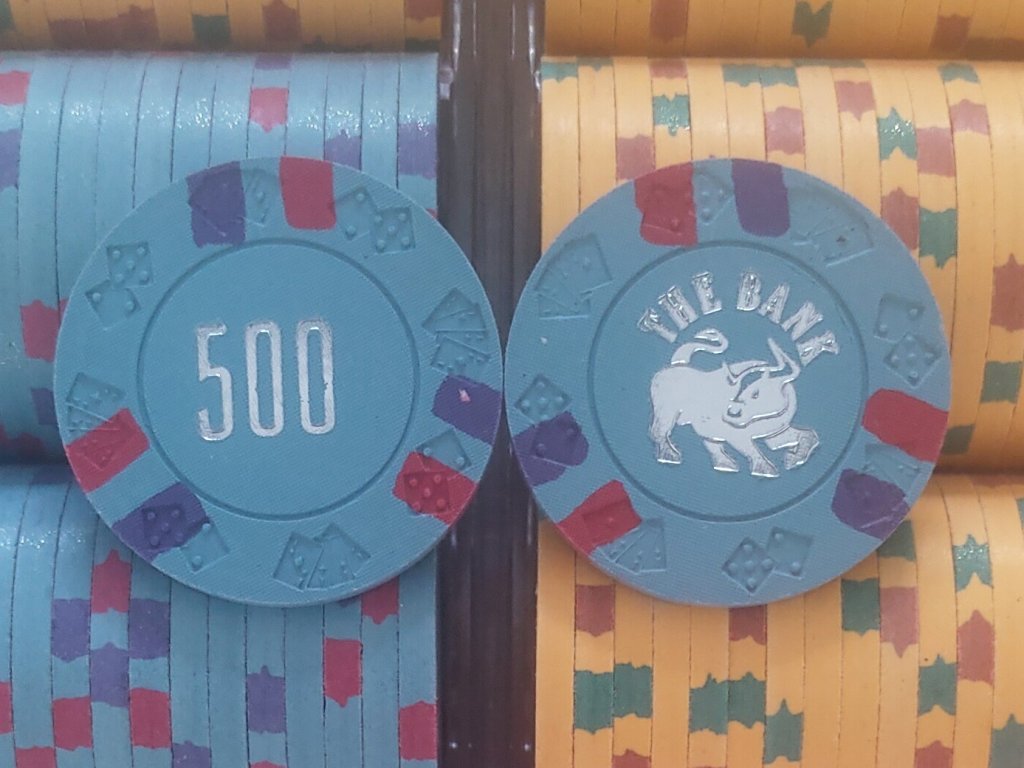 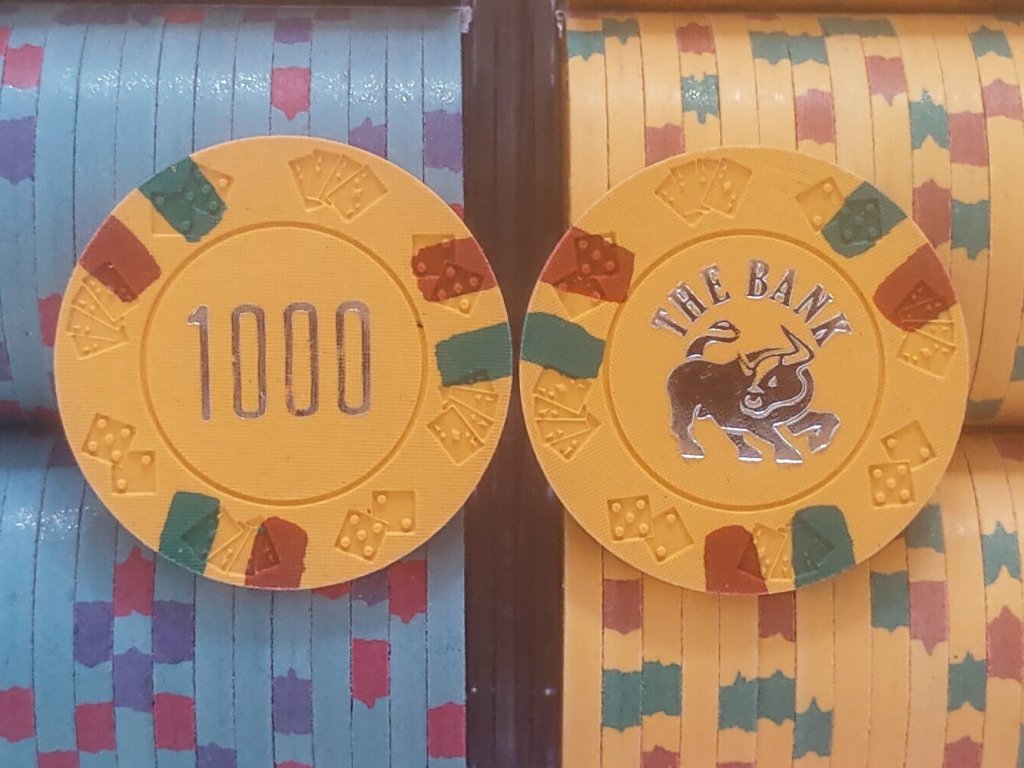 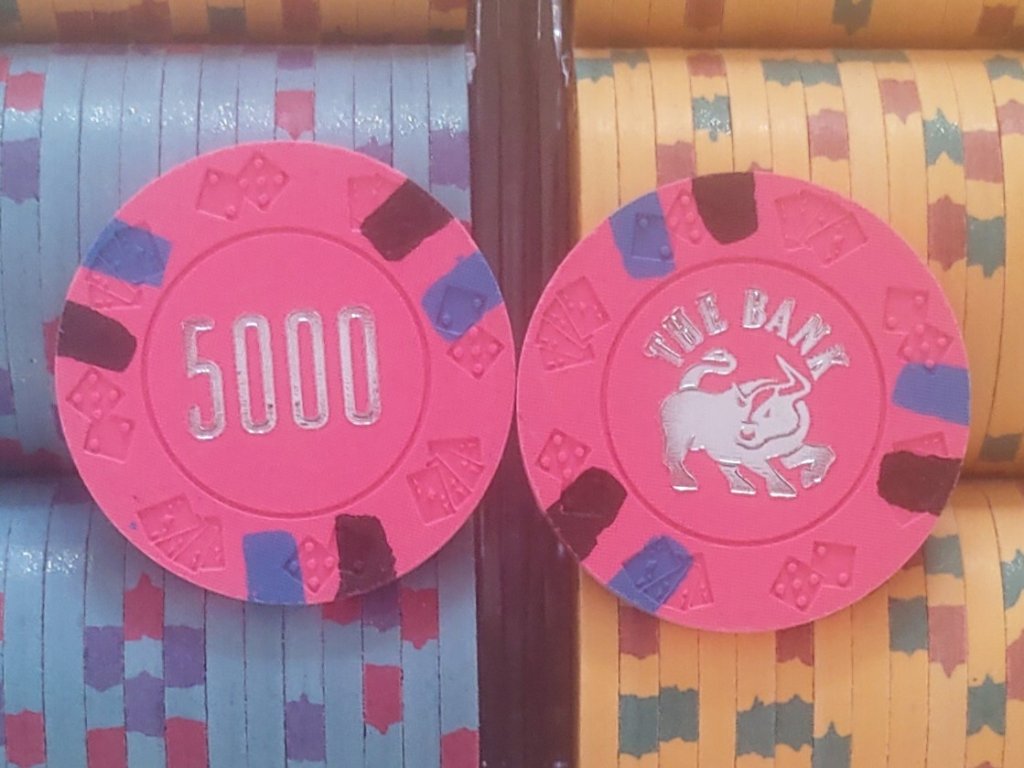 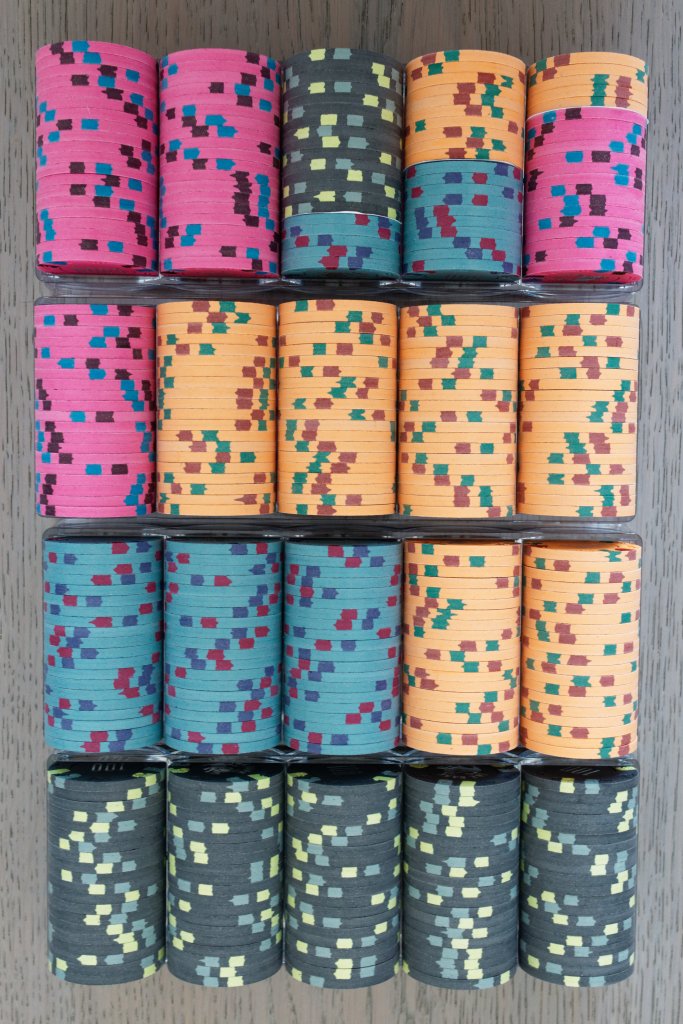 After cleaning with a damp micro-fiber cloth 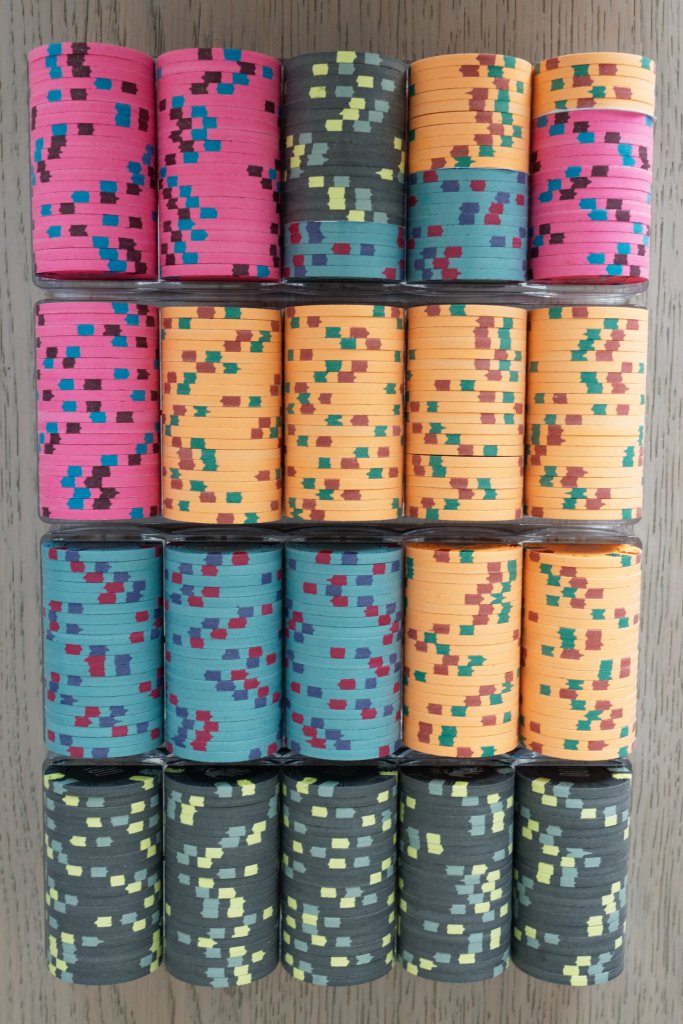 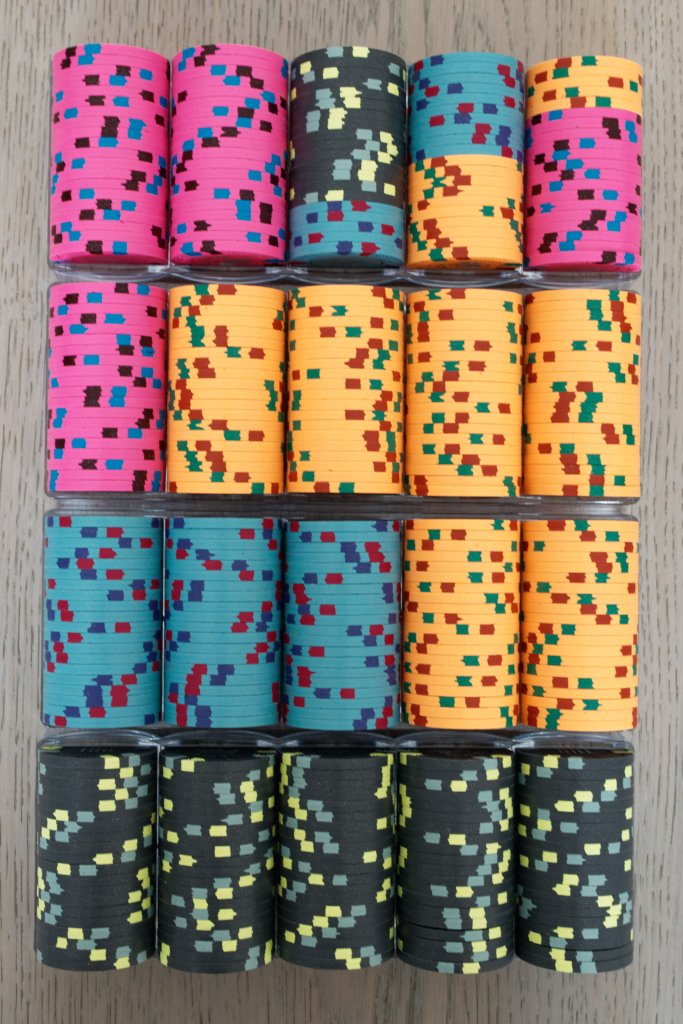 Congrats! These are awesome and will hold you over until your next one

Wow! Those are nice! Congrats!

What is the base color of the 1k?

And are you holding out on us? I see 5 chip boxes and only 4 racks revealed!?!

i'm so happy to see this project come to fruition! i am a sucker for hot stamps. and i appreciate the shoutout, but this was all you - i think my suggestions were pretty minor in the grand scheme of the project, but i love where you landed!

What is the base color of the 1k?

And are you holding out on us? I see 5 chip boxes and only 4 racks revealed!?!
Click to expand...

Hello, base color of the 1k is arc yellow.

There are 5 boxes as I ordered enough to make samples too. More or less half of them is already gone. I should have 7 full samples left if I'm not wrong.
Last edited: Jun 15, 2022

Splash pot? Plz and thank you.

Great chips, I love that mold!

Sure, I just finished to oïl them and they are now dry. I'll take extra pics tomorrow with a spash pot.

I think I'm at the end of my journey too. Congrats!

Edit: add-ons don't count as "new" or continuing the journey 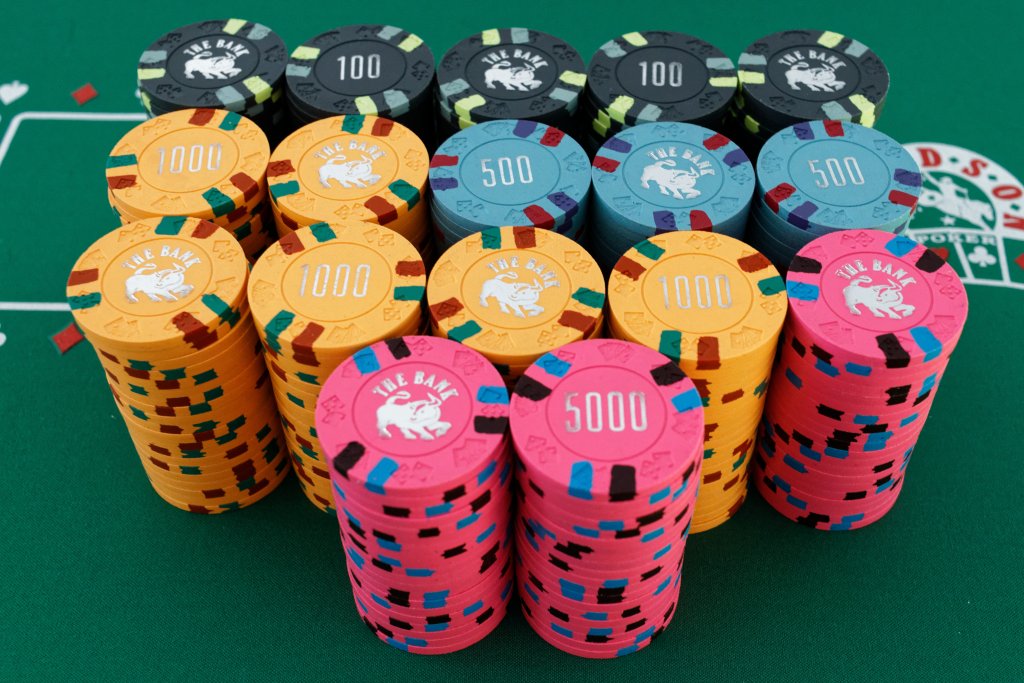 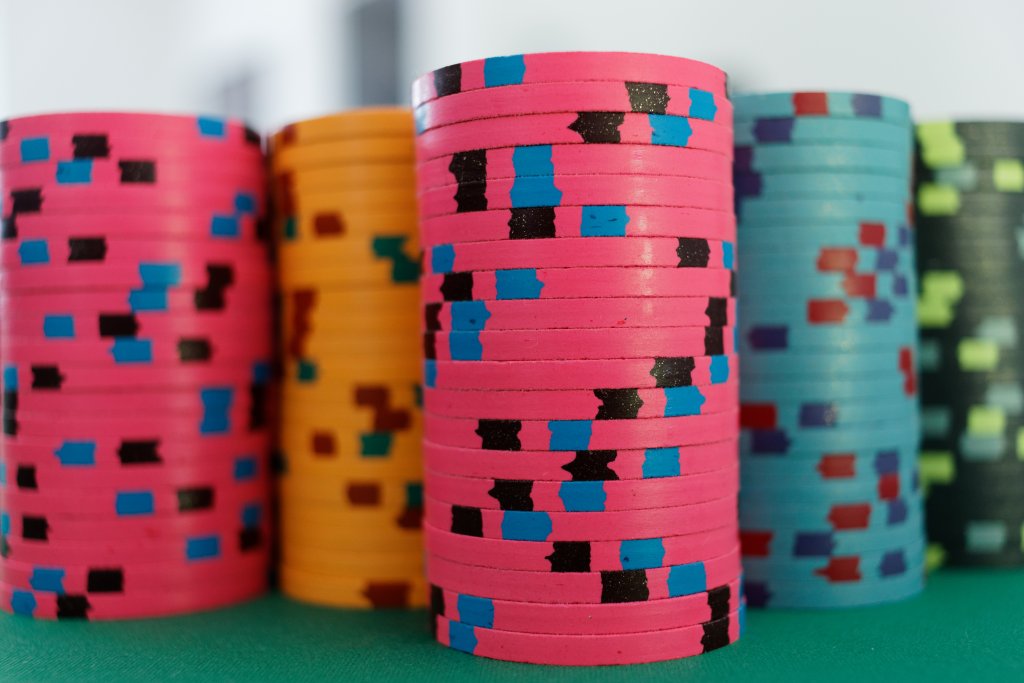 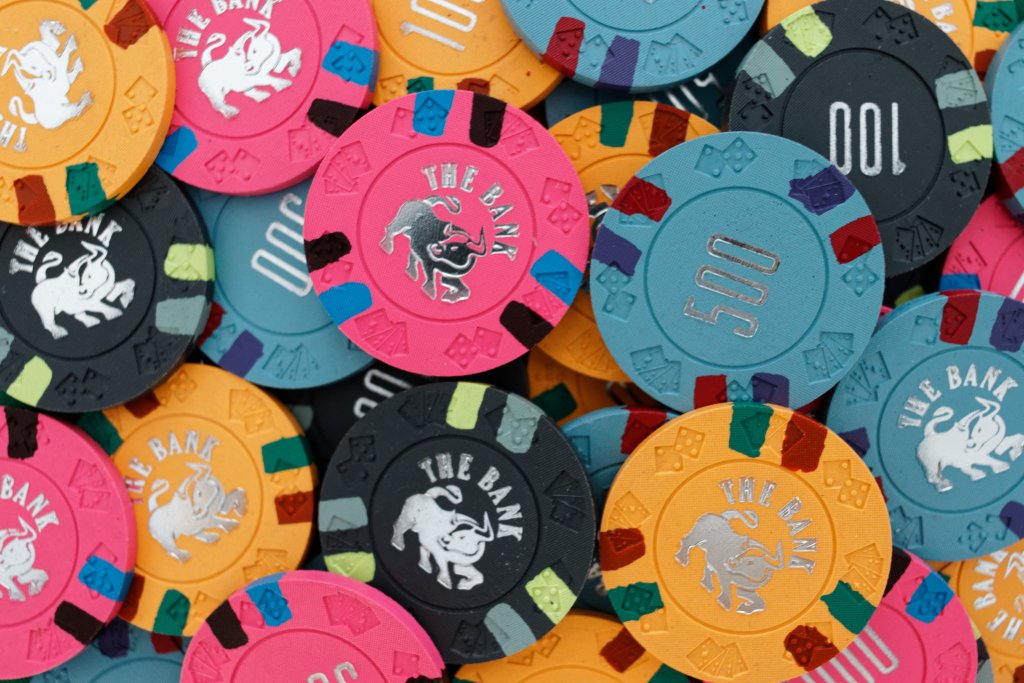 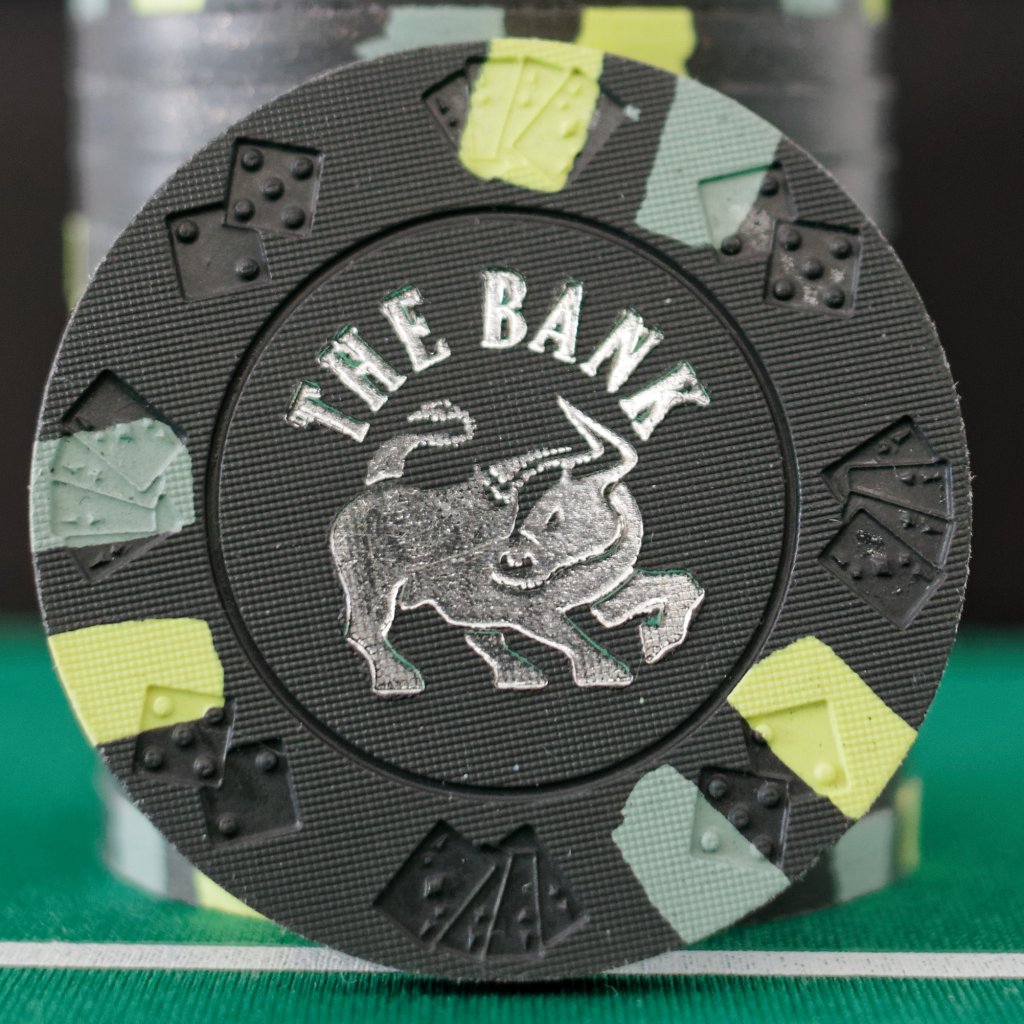 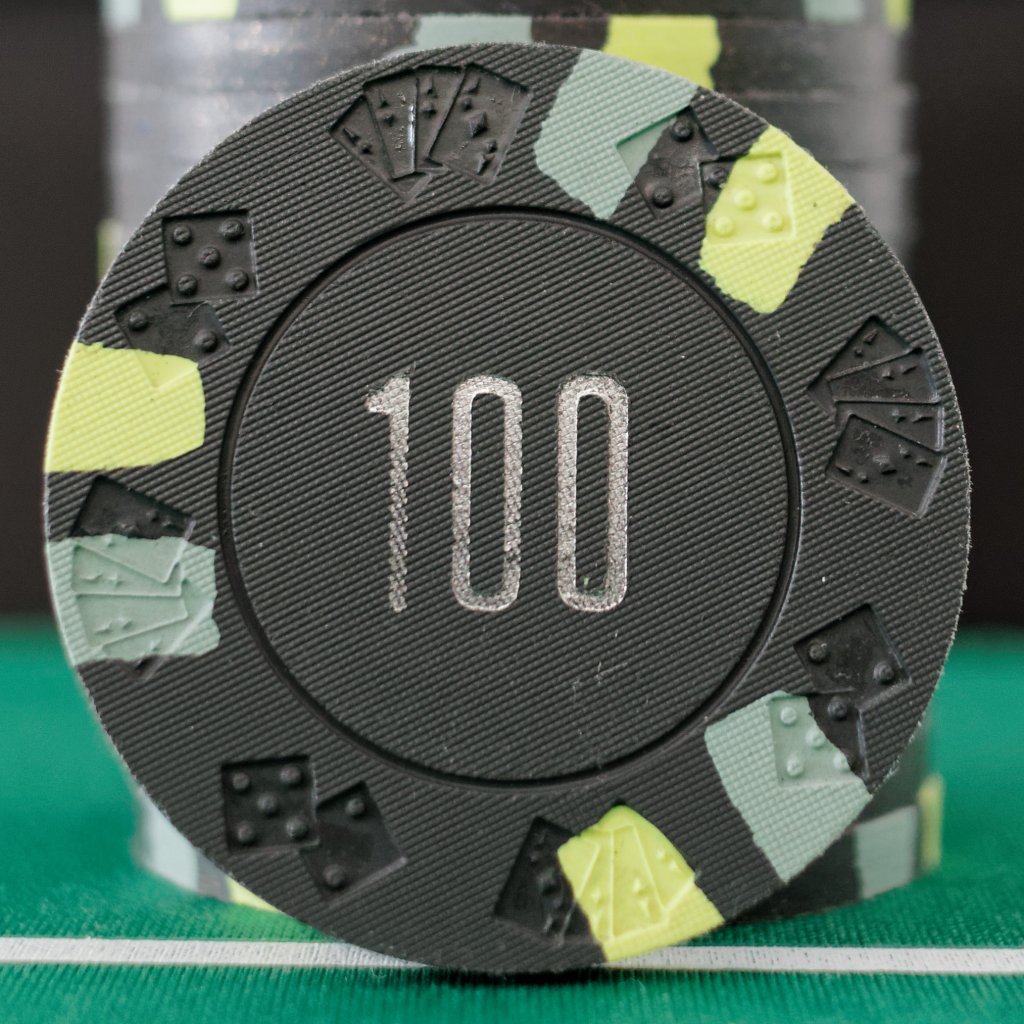 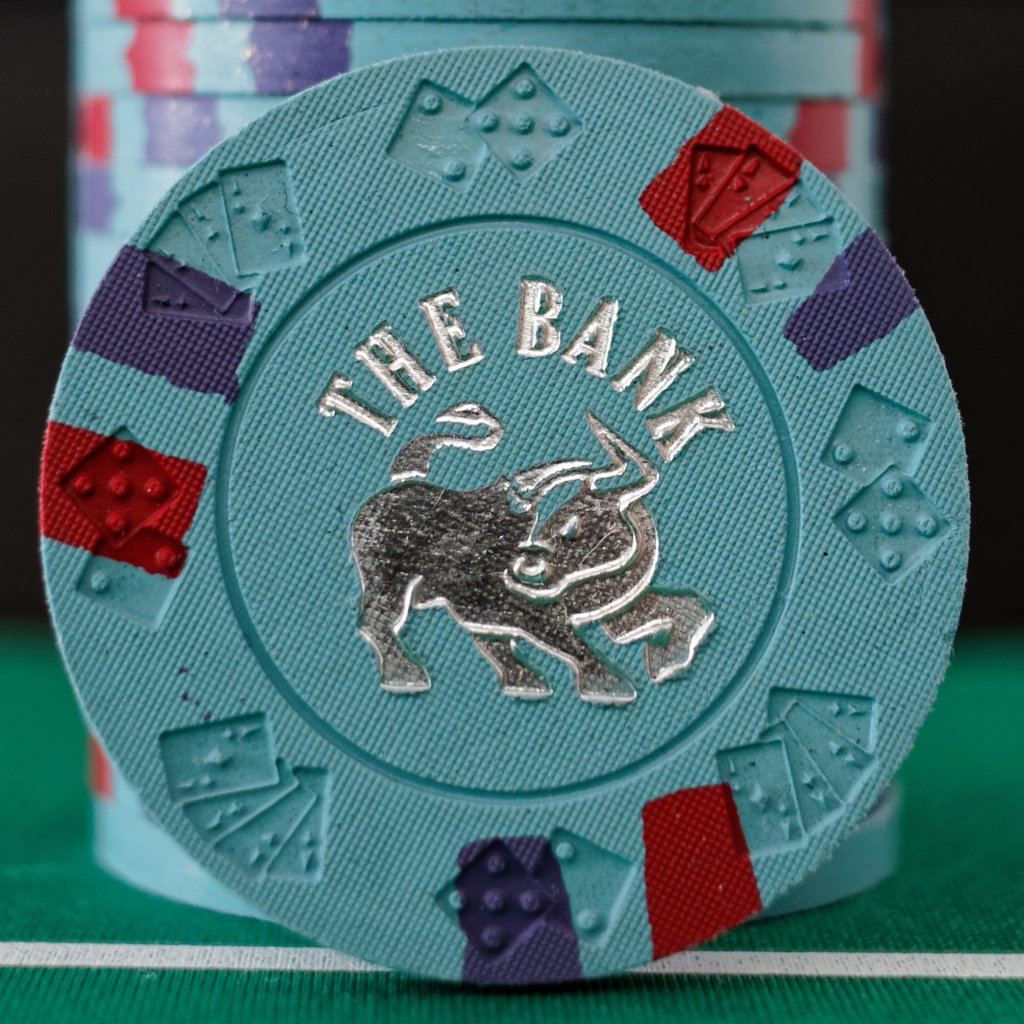 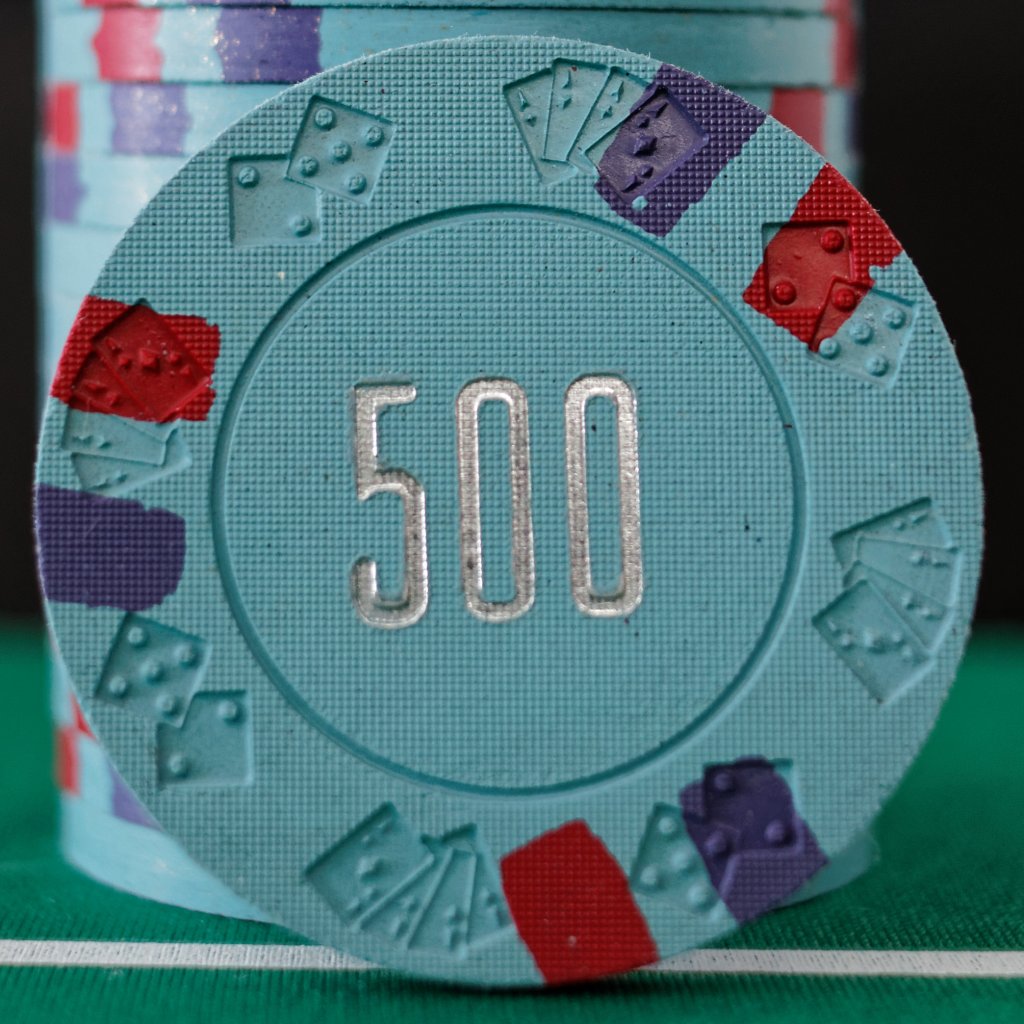 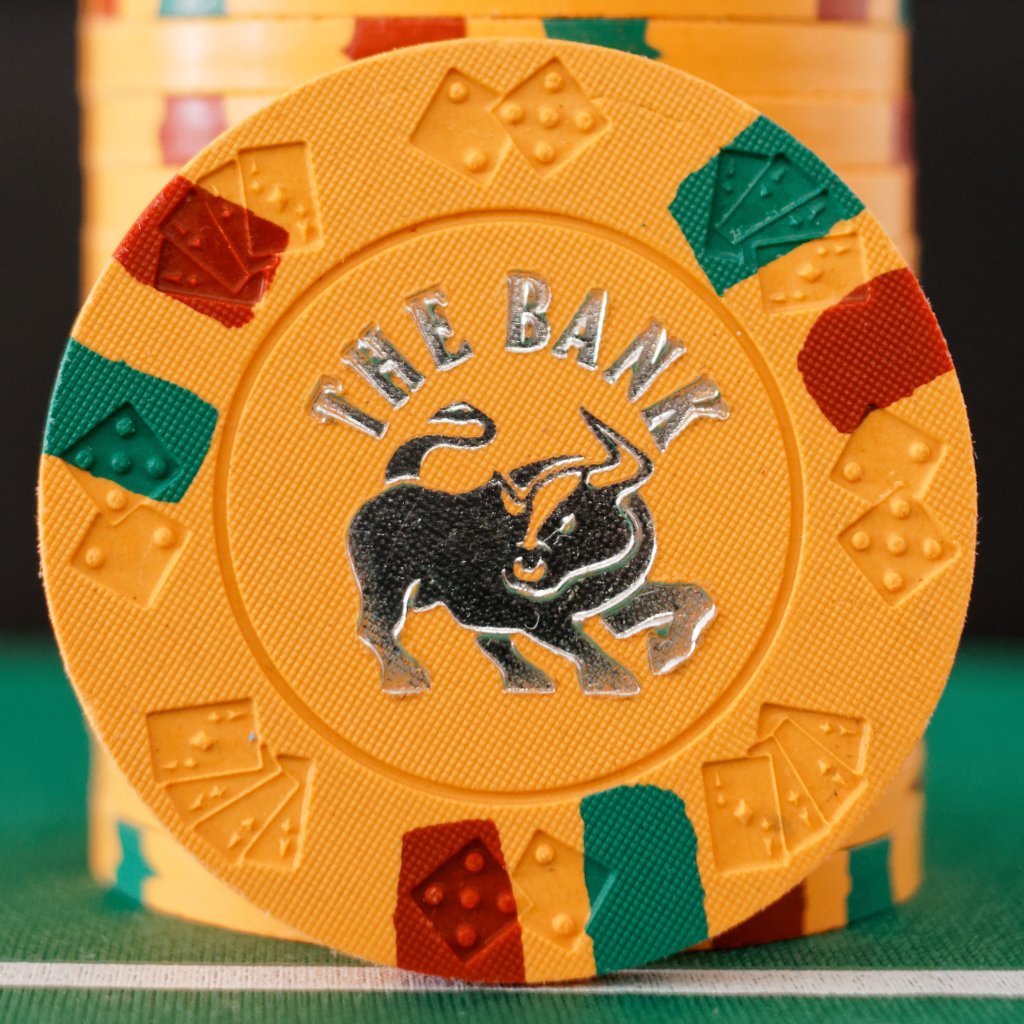 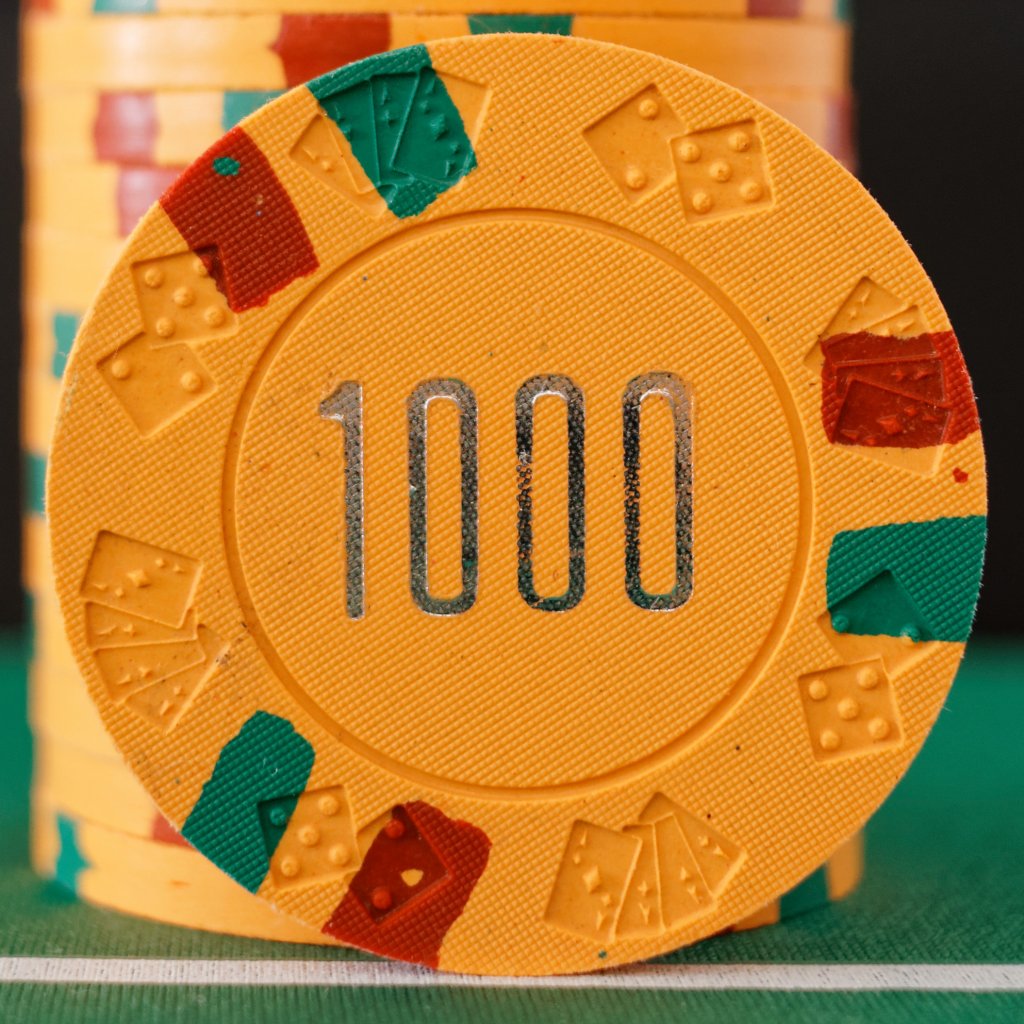 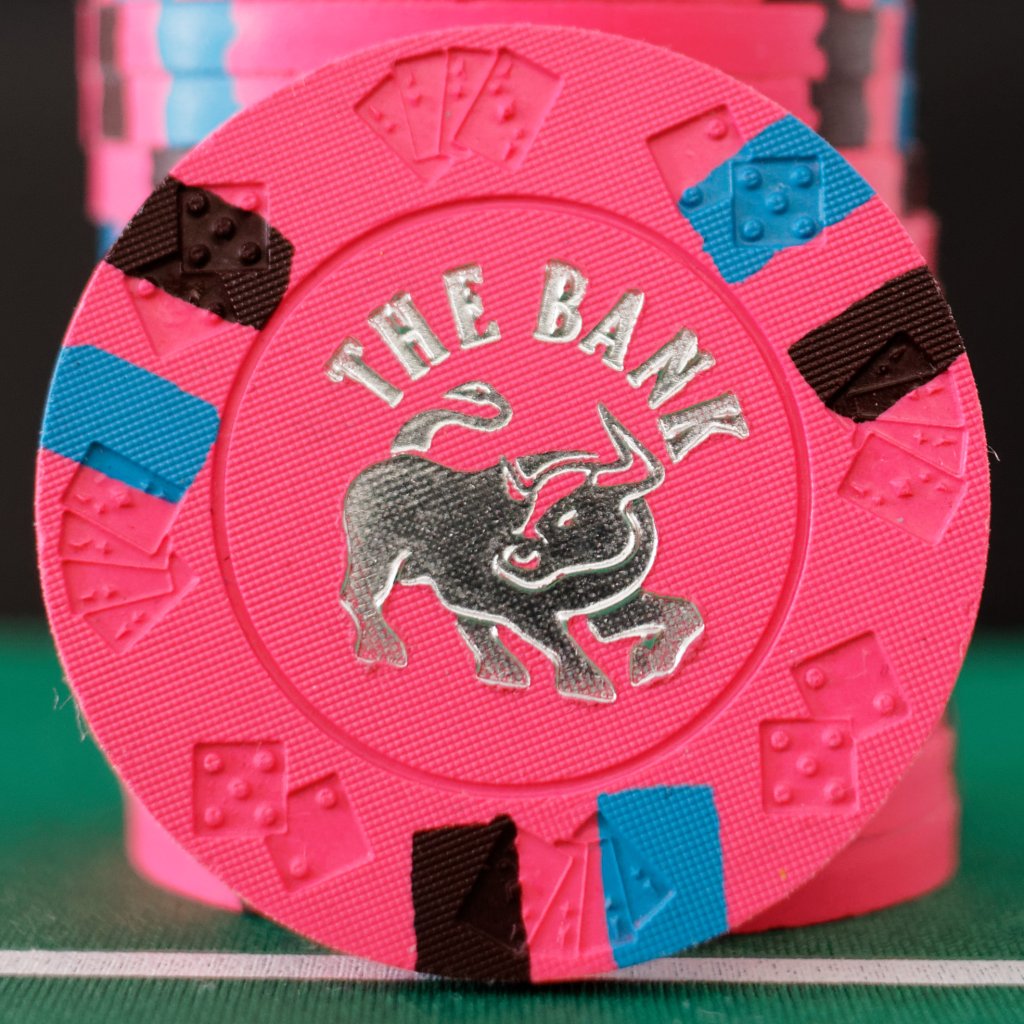 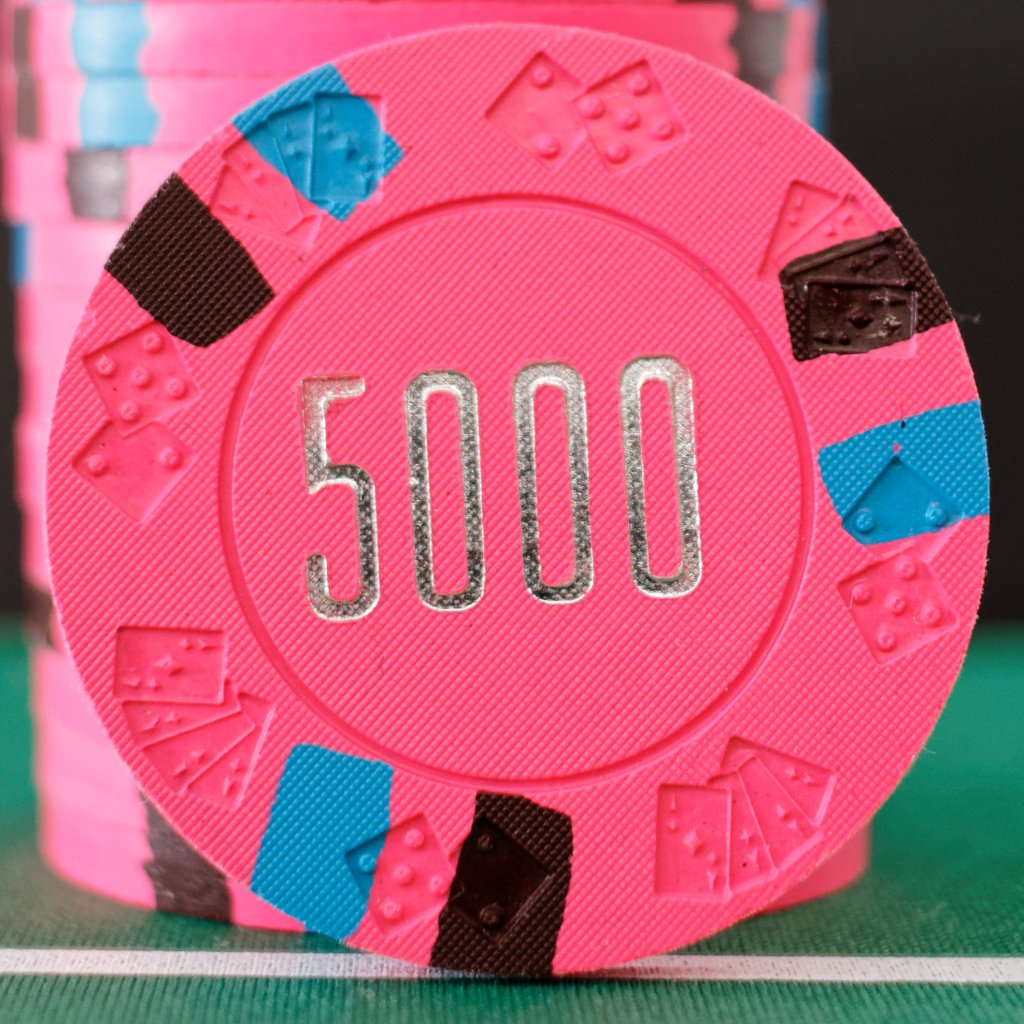 You have created a wonderful The Bank set @Kid_Eastwood !!
And these chips when they are oiled have so bright colors, lovely

Plaques almost made their way ... 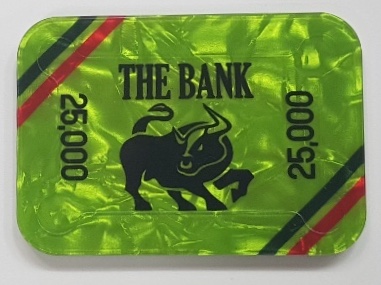 @Kid_Eastwood planned for this week I hope?

Fran said:
@Kid_Eastwood planned for this week I hope?
Click to expand...

I know what you feel …

Got the MSK plaques today ! 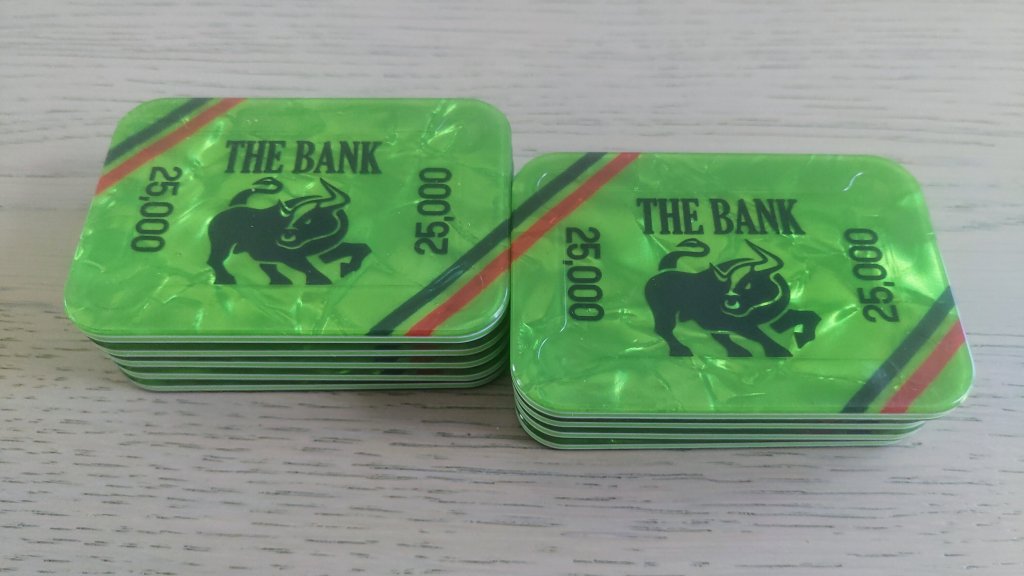 Wow, beautiful set! Congratulations and thank you for sharing.

I don't know if you've really finished your day, but in any case what an accomplishment!

I'm also finishing a plaques project for one of my sets. Even if these are usual questions, dare I ask you what the deadline is at MSK and what image format to send them?

I'm also finishing a plaques project for one of my sets. Even if these are usual questions, dare I ask you what the deadline is at MSK and what image format to send them?
Click to expand...

The plaques would be sent about 3-4 weeks after their get the payment.
I send them PDF files containing vectors.

I don't know if you've really finished your day, but in any case what an accomplishment!
Click to expand...

Well, I'm mostly busy completing a The Post set for my cash set. This is what keeps me into chipping to be honest.
After that who knows ... Maybe a CPC custom cash set ?

The plaques would be sent about 3-4 weeks after their get the payment.
I send them PDF files containing vectors.

Well, I'm mostly busy completing a The Post set for my cash set. This is what keeps me into chipping to be honest.
After that who knows ... Maybe a CPC custom cash set ?
Click to expand...

It is I who thank you for the advice and warnings!

I still have to rework my logo and choose a side color, which is not easy in my case, as I hesitate between 3 colors.

Well, I'm mostly busy completing a The Post set for my cash set. This is what keeps me into chipping to be honest.
After that who knows ... Maybe a CPC custom cash set ?
Click to expand...

It's funny, I've often heard chippers say: "I'm going to finish my collection with a custom CPC set". Which may be my case too

Close-up of the plaques that go with the chips : 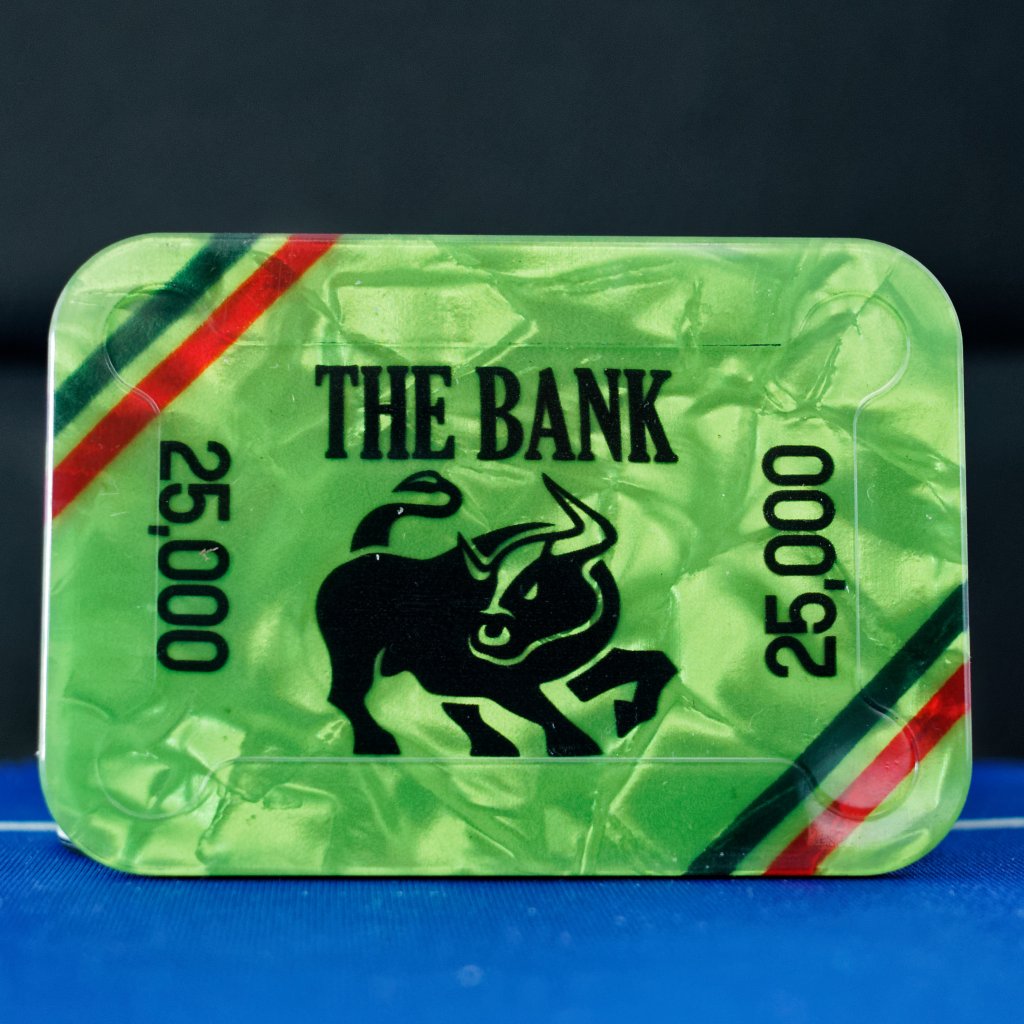 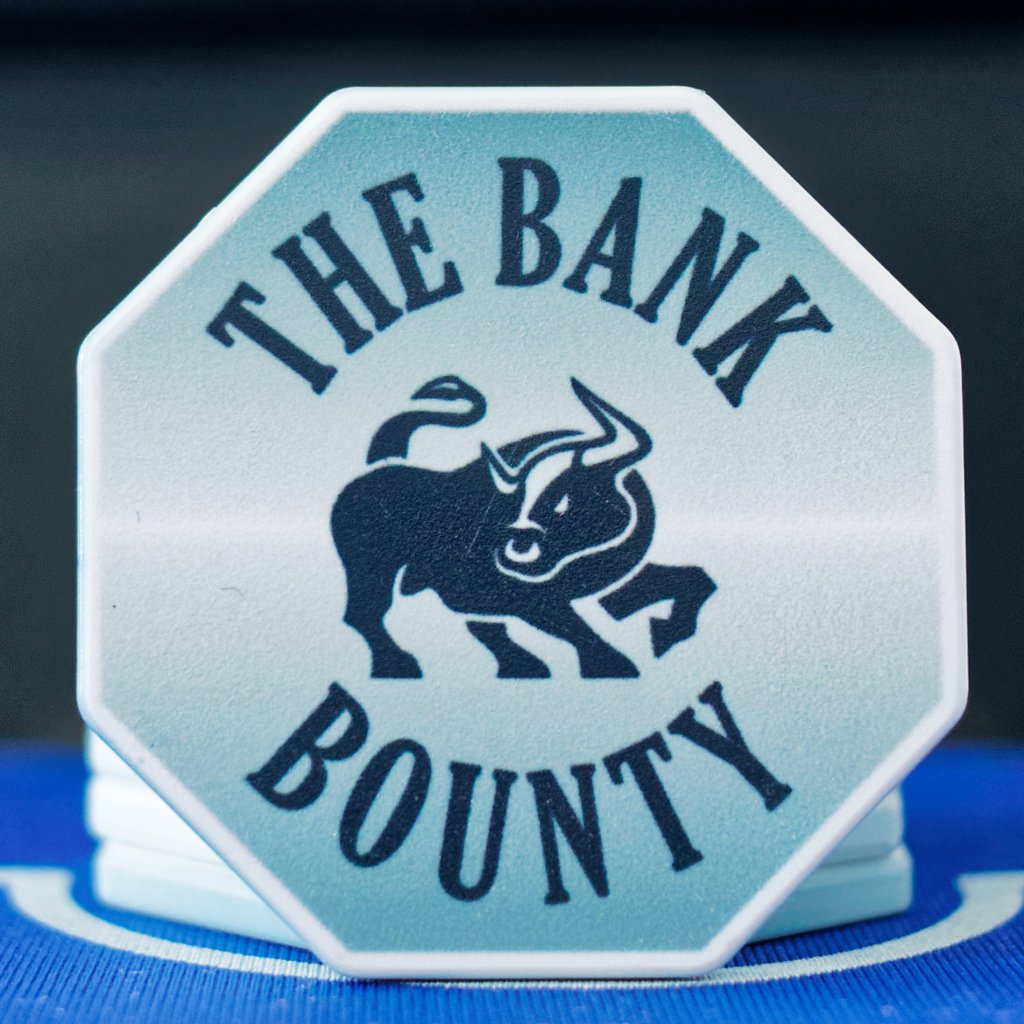 A Glimpse inside the Goldfish Bowl - my chipping journey so far ..

Added to the Emerald Bay set