Well, my TV started to flicker. Disconnecting it from the power momentarily would fix it for a while but the flickering would eventually come back. I called Sharp and the Tech had me do a hard reset by holding some buttons in and plugging the TV back in. It didn't work and now the TV is dead. No picture at all. The power LED is flashing a code that I think is a sign that the main board is bad. To my surprise, they are sending out a repair guy on Wed to fix it for free. I was all set to go buy a new TV today too. Hopefully they can fix it.

I recorded a video of the issues before I called in case I had to show the problem.

Oh, That is terrible, just terrible....Thats col that they are going to fix it for free though..

I'm still rocking an off-brand Sceptre 40" that we bought online from WalMart, had it for years and aside from the built-in speakers sucking (we got a soundbar) the picture has been fantastic for years and we got it for like $300 a few years ago. Can't complain.

Pretty cool they're sending someone out to fix it for free though, that's good customer service considering the warranty has expired (then again, you're a customer who is buying the 70" TV's, so they probably have a greater incentive to keep you happy)

Had my TV fixed one time under warranty. Guy comes out, lays it screen side down, takes off a back cover, replaces a board about half the size of a mother board. 5 min start to finish, done. That was 3 years ago, no problems since, so hopefully easy fix, but I swear if mine breaks, I'm just going to look for a replacement board.

BiGGyT said:
Had my TV fixed one time under warranty. Guy comes out, lays it screen side down, takes off a back cover, replaces a board about half the size of a mother board. 5 min start to finish, done. That was 3 years ago, no problems since, so hopefully easy fix, but I swear if mine breaks, I'm just going to look for a replacement board.

I'd imagine there are videos online to show step by step. Probably not that difficult to do. I'm self-taught to upgrade and build PC's and I imagine it's probably not a ton different, it's just hardware. Now changing a cracked screen might be more a pain in the ass.

And here it is, pretty simple actually

I found this info about the flashing power LED.

The power light is an error code that tells me exactly what is wrong with the TV. Count how many times the POWER led flashes per second? (Dont worry about the OPC led)

If its 1x per second, try doing the factory initialization to get the TV back on to confirm a bad lamp/inverter.
Click to expand...

I got the bad main board.

Had my LG for years and never had a problem.

stocky said:
By an LG.

Had my LG for years and never had a problem.
Click to expand...

Sharp is fixing it for free so no need to buy a new set now. What size is your LG? I have a Sharp 42" upstairs. It's 6 years old. Perfect picture, no issues. Bedroom has a Samsung 32", about the same age, no issues. I think the larger screens are more prone to having issues. 70" is the perfect size for the basement.

40-50 something inch. Perfect size for our lounge room. Probably time for an upgrade, I think it's 7-8 years old now.

Also have a samsung 32" in the bedroom. Also a great tv, never any issues.

I found this info about the flashing power LED.

I got the bad main board.
Click to expand...

PS/Main board are easy fixes, congrats!

Lamps can be a job (based on having my guys replacing panels in a variety of laptops over time.)

There's a slight chance that you new main board will last longer if you have the TV on a power conditioner (not just a surge strip), especially if you have dirty power down there, perhaps during storms & such.

Maybe I'll pick one of these up. I always thought they cost more.

Actually I think the power strip I have now may be a conditioner.

Here is a pic of it that I found on Google images.. 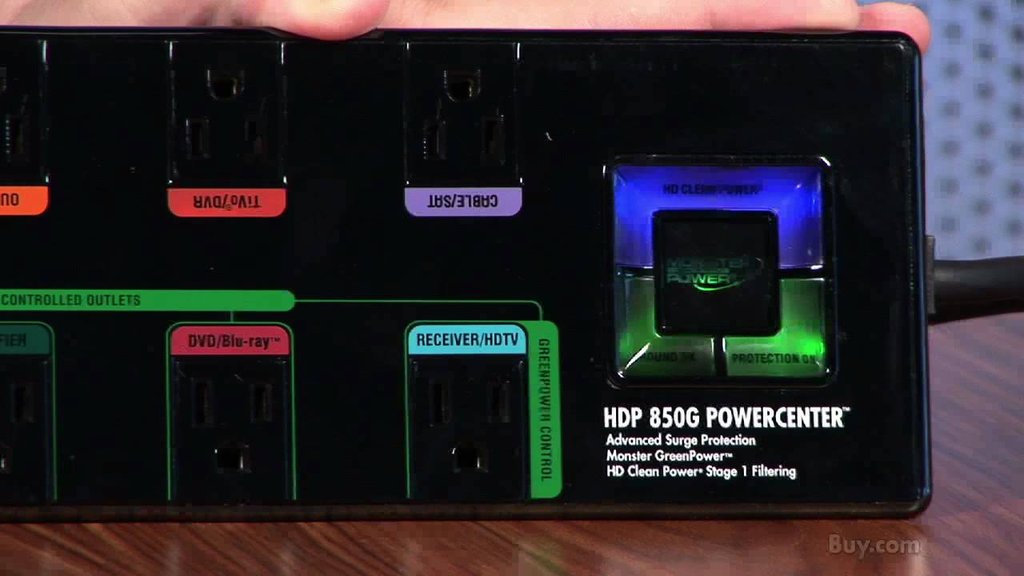 That Monster and that Furman both give 330 V peak clamping on transient spikes (which most often happen on power restoration, or snap-back after brownouts).

The Furman PST-8 is the lowest in that line which does better, with 188V peak clamping and a 135V over-voltage shutdown.

(And I'm a Monster-hating snob.)

I have a full-on UPS/power conditioner for my system - I have a NAS, HTPC, and my router on battery backup, and the receiver/subs/television just filtered/conditioned.

(Or, technically, I have all that stuff in storage, until I move.)

Sharp says the part needed to fix my set is not in stock with no ETA. There has to be some clause that says if they cannot fix it in a timely fashion they will replace the TV. (I hope) Today I start a social media campaign about it on Sharps Twitter and FB pages. Tommy wants a replacement TV now! :

I sense a rant in the style of Jbutler hating on Comcast coming in the near future.

Called Sharp again for an update. They said my service case was sent to the higher ups today and is awaiting approval for an exchange. I will know by Friday they said.

I got Twitter and FB responses from Sharp asking me to email the case number so they can help expedite the case. :

No exchange but someone will be here tomorrow to fix the TV. The part came back in stock last week.
A friend from work stopped by to help me take it off the wall. It's too heavy for the wife to help. The TV repair person said he wouldn't help me take it off wall. 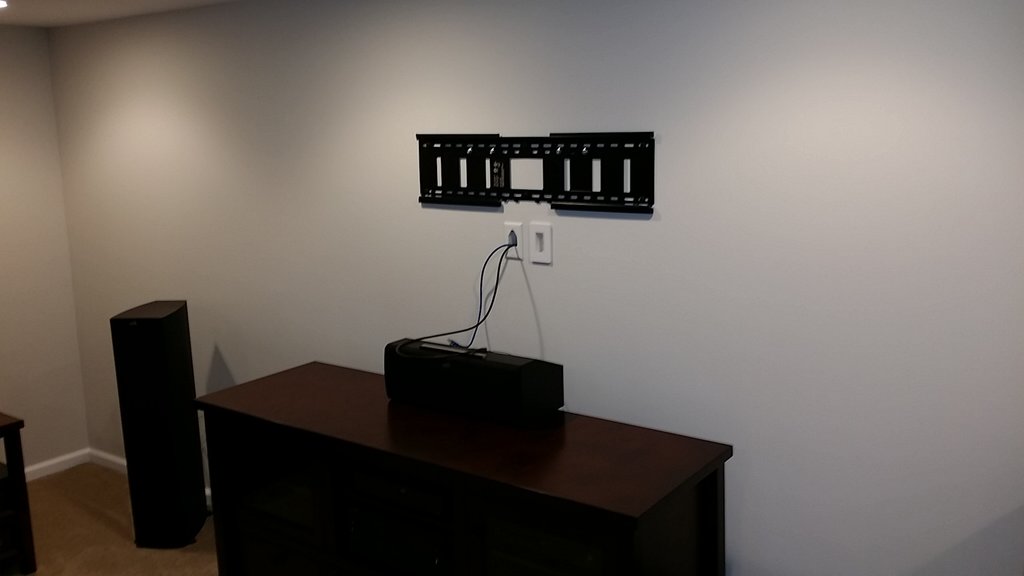 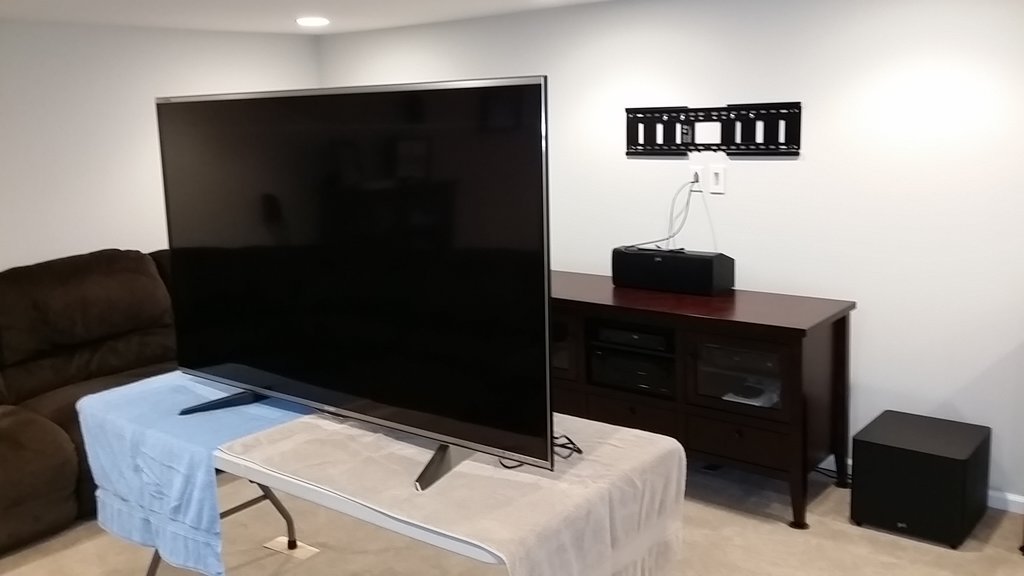 Put the stand on temporarily.

I have the Sharp 80" LC-80LE844U purchased a few years ago. *Fantastic* TV, especially once calibrated. It was arguably their top of the line at the time - I say "arguably" because they had a 90" model at the time, but it lacked full array backlighting, and it lacked 3D IIRC. I'm pretty sure my 844U was the last model to have full array backlighting. The next round of top-of-the-line models from the majors dumbed down their feature sets to lower costs and to make them easier to manufacture.

I never been a fan of 3D. Mine has it but it is something I probably will never use. I would like to see more full array with micro dimming models that are affordable.

Despite the fact that the 3D technology in the theaters vastly improved over the past several years, I was never a huge fan of 3D, either. I actually had my Sharp 80" set for over a couple months before even bothering to try a 3D movie (long story... tell you later when I have move time). Paired with the Sharp is a PS3 going through a Yamaha RX-A3000 receiver. The PS3 has *radio* controlled active shutter glasses (i.e. not infrared).

Anyway, when I finally tried it, I watched a movie that was shot with stereo/3D cameras (as opposed to a movie shot with a standard camera, and then post-converted), and I think I sat slack-jawed for nearly the entire movie. It was awesome - SO much better than passive 3D IMO. I'm so hooked, I now have about 40 3D movies on blu-ray.

Go here to see a list of real vs. fake (post-converted) 3D movies. Some post-conversions are horrible (I hate the job they did on Jurassic Park), and some are OK, but nothing beats a movie originally shot in 3D. Current 3D computer animated films make great 3D movies, too. Disney-Pixar's "Monsters Inc." is probably the best quality 3D movie I've seen - nothing flashy or gimicky, but the TV looks like a window into the monster world!

Sharps don't have a great reputation for 3D, but again, I'm using glasses that are controlled by the PLAYER (the PS3), not the Sharp TV. Furthermore, they're radio controlled.
Last edited: Jul 7, 2015

My TV came with a set of 3D glasses. I'll give it a try if they fix or replace the set. The TV repair guys just left. The new part did not fix it. They were told by Sharp to put the old part back in. I am hoping the TV gets replaced now.

Damn, sorry to hear Tommy. Sounds like Sharp will take care of you though, given they were ready to fix the tv, can't see them not sending a replacement. Keep us apprised!

Would have been nice if I'd included the link, huh?

ski_ex5 said:
Would have been nice if I'd included the link, huh?

Thanks. I will check it out.

Just got a call from Sharp. The TV will be replaced in the next 7-10 business day.

Tommy said:
Just got a call from Sharp. The TV will be replaced in the next 7-10 business day.
Click to expand...

grandgnu said:
Now list the old one on Craigslist for $300 and say it stopped working but "probably just needs a new mainboard"
Click to expand...

They will be taking the old TV with them. Some company called NVC will deliver and set it up per Sharp. I'm assuming it will be a re-manufactured TV. (I'm past the 1 year warranty) As long as it looks new and works like new, I really don't care at this point.

Show Us Your Home Office
2