I've been on PCF for almost four years now. I originally wound up here with the idea to make a custom set for my Dad - you can see my original posts if you are so inclined. I pretty quickly realized a few things: 1) Not cheap 2) Needed samples 3) I really love poker chips. I tabled the idea for quite a while and decided to work on a set for myself first (shameless plug for Top Hat Cafe). I learned that not only did I like Paulson chips a lot more but that my Dad did too. I would ask him to compare my chips with his CPC/ASM Europa chips back home. A few months ago I decided that I needed to get back on this train.

This paragraph is from my first post on PCF:
"My father taught me how to play poker and continued to play in cash games with me and my friends throughout middle/high school and college. Even though his name is Rich, he eventually picked up the nickname "Rico" and that pretty much stuck for my friend group. I would like to design a black chip inlay for a cash set with denominations that say either "Rico's", "Rico's Room","Rico's Card Room", or "Rico's Poker Room." Additionally he is a stage electrician for large touring acts, so I think it would be cool if the "O" in Rico was a spotlight that cast down onto the denomination or something like that. I would also want "Virginia Beach" to be included on there as well. I don't have any real suggestions other than that though."

I had the idea of including a different theater for each denomination featuring some of his favorites where he has worked during his career including the Electric Factory (Philadelphia, PA), DAR Constitution Hall (Washington DC), The Mosque (Richmond, VA). Sometime in the interim from when I joined he was hired as the production manager at the Hampton Coliseum (Hampton, VA). No doubt the theater that he has had the most history with over his career and certainly the one closest to his heart - his dream job.

Really he doesn't need a big set or a brand new and shiny one. Hard for me to imagine him ever hosting/being involved in a game with more than $2000 on a single table. I like the idea of adding on Casino Camino chips in the future, but it's really not the priority. I do definitely need 10 more Aruba Palm Beach $100s. The chips destined for this set are shown below:

J5 has made my crude initial vision of the inlay (see my initial thread if interested) into something amazing. I can't wait to share it with you guys.

This is what the Hampton Coliseum looks like btw. Phish fans may be somewhat familiar with it. 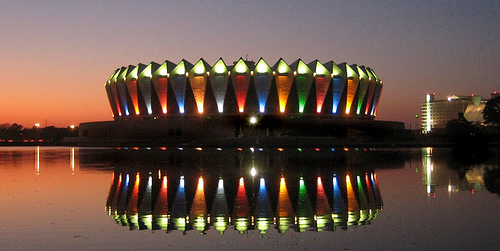 I guess J5's ears were burning as I was writing the original post!

Might as well throw this is as I'm thinking about it.

And if I ever decide to in the future. Casino Kash $5k is the clear choice for a $100

Does anyone have a casino kash $5k I could buy? Just 1

These should turn out amazing !!!

I somehow missed this earlier. Another great set you have coming along here. Very well done.

I used to have dealer buttons made by Sal (RIP) with OWPS. Who do people use to make buttons these days? @Himewad

Burke said:
I used to have dealer buttons made by Sal (RIP) with OWPS. Who do people use to make buttons these days? @Himewad
Click to expand...

Burke said:
I used to have dealer buttons made by Sal (RIP) with OWPS. Who do people use to make buttons these days? @Himewad
Click to expand...

It seems that @ABC Gifts and Awards is steering people toward @BR Pro Poker for their poker products. They updated their web site and all of their product lines are on that site. I have always dealt with Kristil - she is awesome. 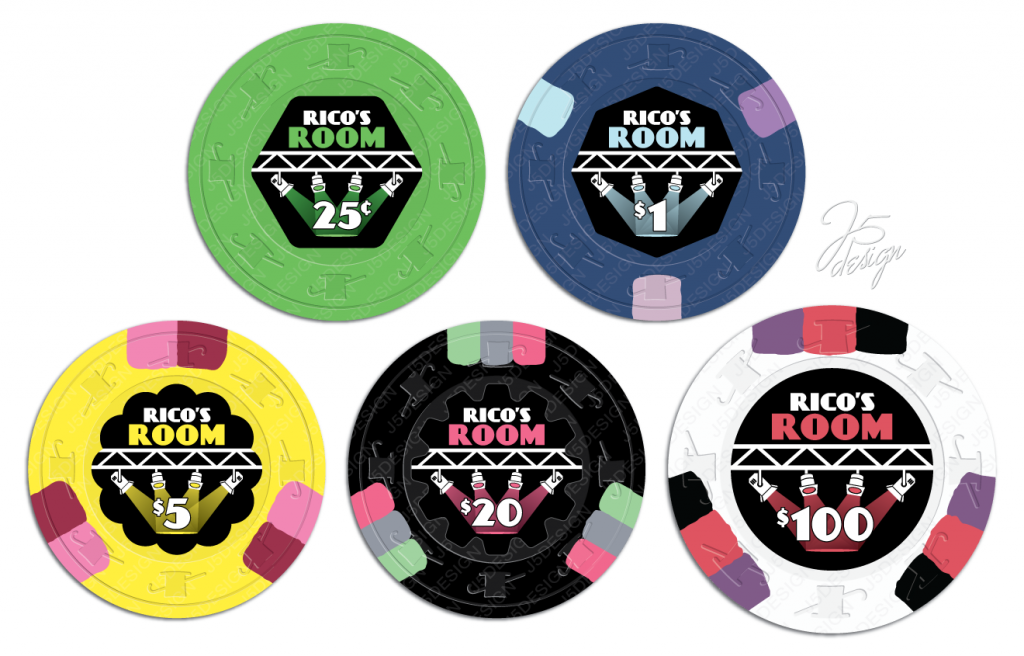 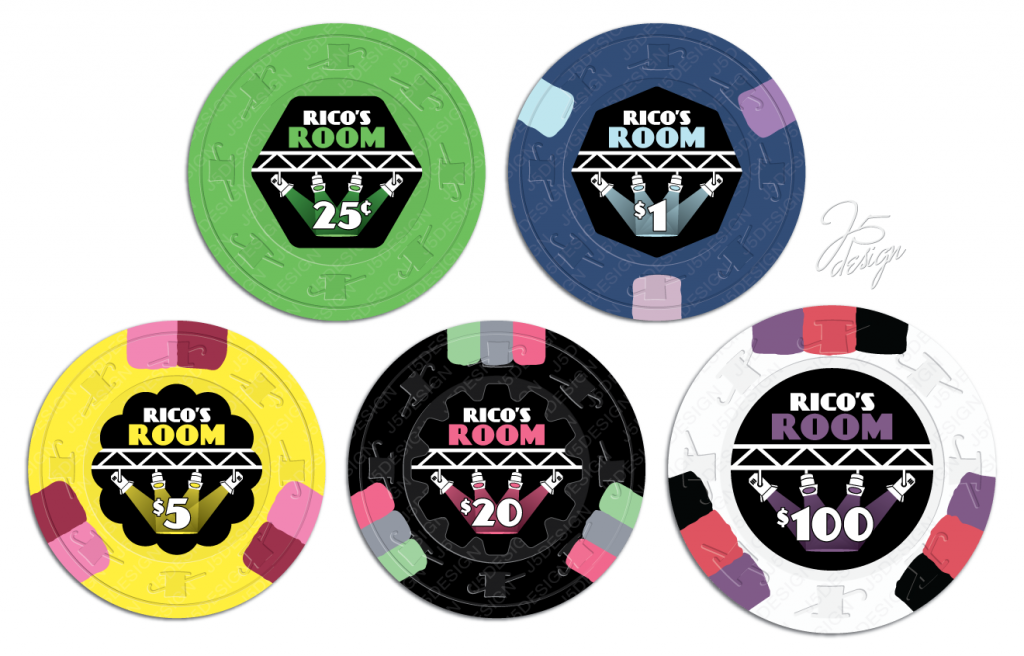 My thoughts are watermelon is better for individual chip and purple is better for set? There will only be one $100 chip and it will never be used. It will probably be a card capper in other games honestly.

I prefer the purple, just because the watermelon looks too much like the $20 chip.

If mostly a card capper chip - I dig the watermelon myself. I do agree with you though, purple works better for the set.

Im gonna go with purple. All about the set lol

Himewad said:
I prefer the purple, just because the watermelon looks too much like the $20 chip.
Click to expand...

Also, I love the personal touch of the set and the nickname Rico. My first instinct when I think poker/gambling and Rico is Rico charges, which actually just makes the set cooler to me.

@Gear crushes it yet again:

it will take some time to get ready, but I’m excited for that time as well!

Great job!
Shaped paper inlays are the worst, don’t give up, it’ll be worth it.

Still not proper pron....but getting closer. Labeling is done except for some of the $20s. I’m having so much regret that I sold two racks of Camino Casino $5s. Technically I don’t think they would ever be needed for the game they are headed to, but it was a dumb move. 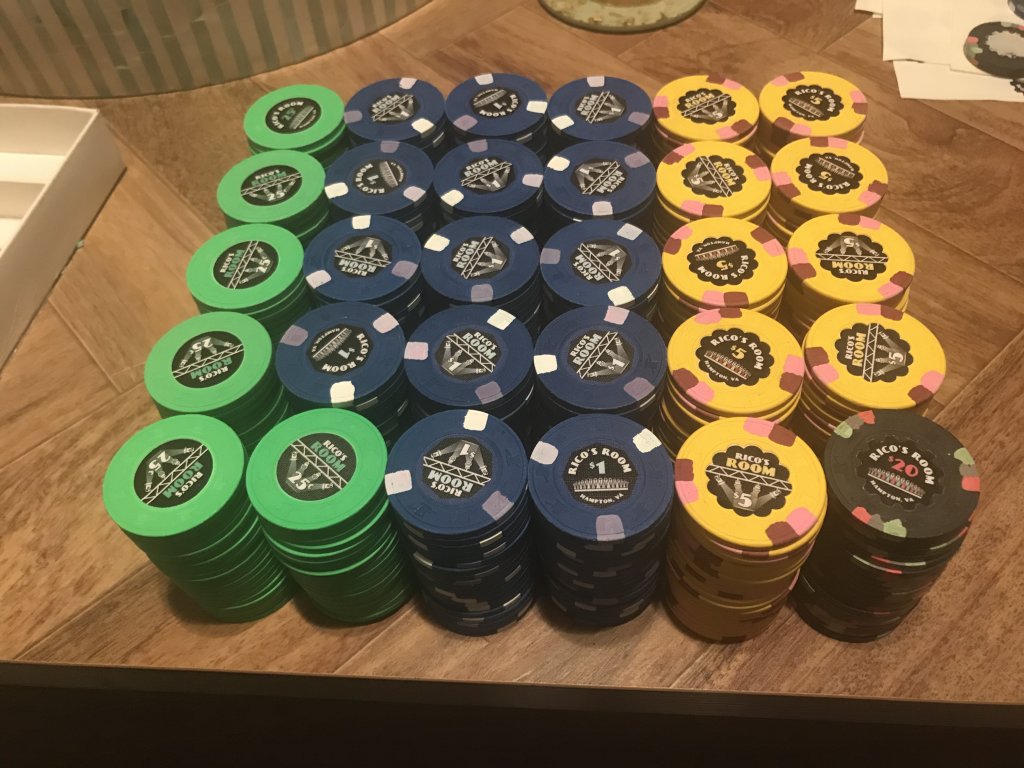 all above were involved in getting those chips, design, or idea in some way

Larry, this one is my favorite. Big thanks! 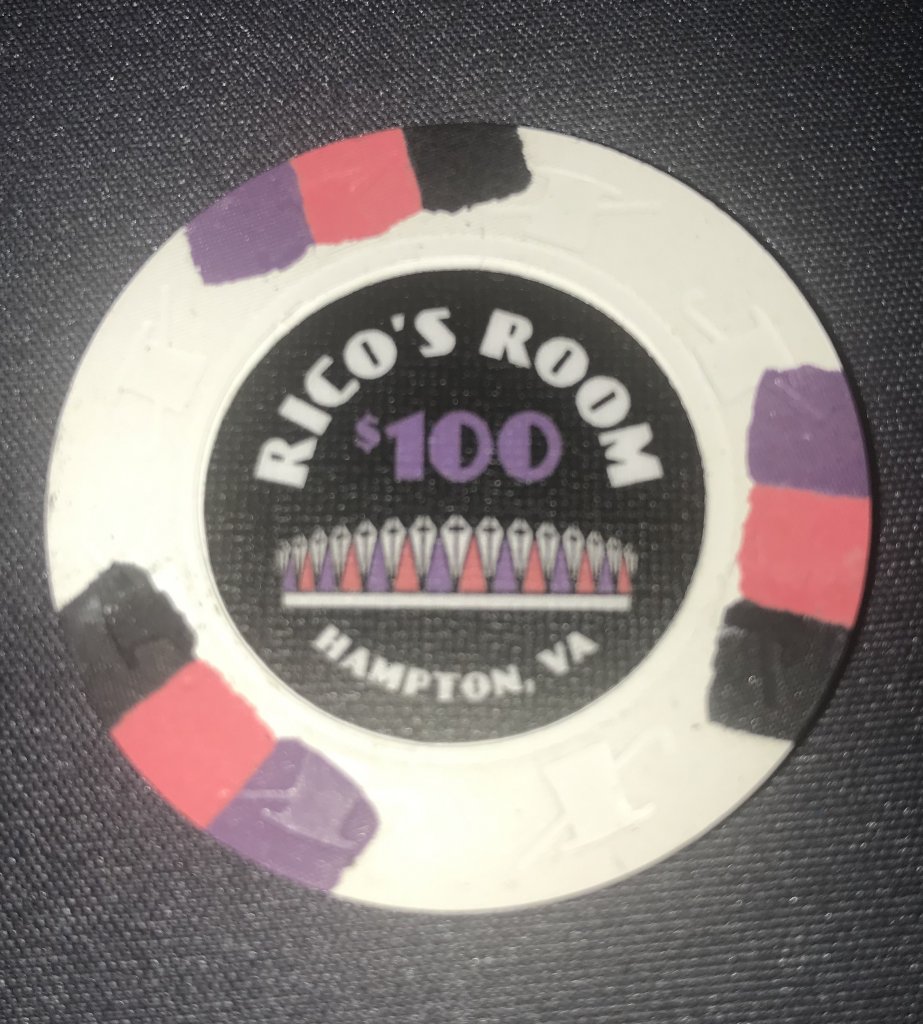 Gonna do a DB run if folks are interested:

@BarrieJ3 this is basically the best I will get 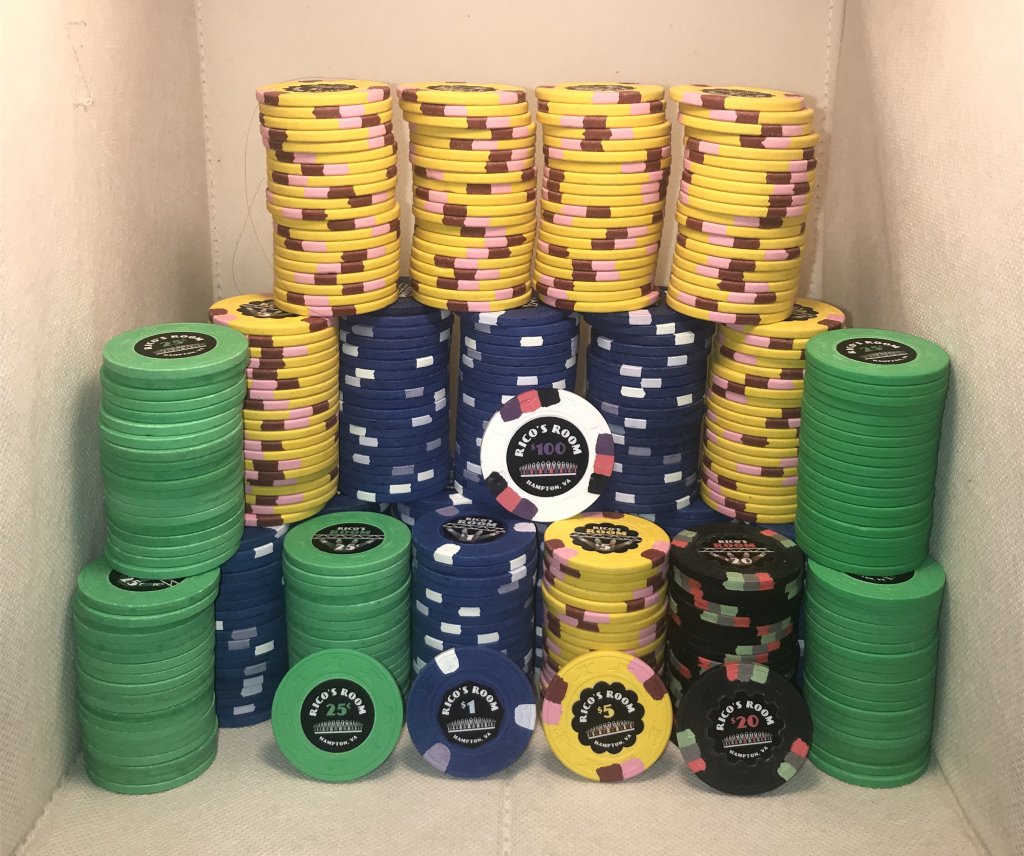 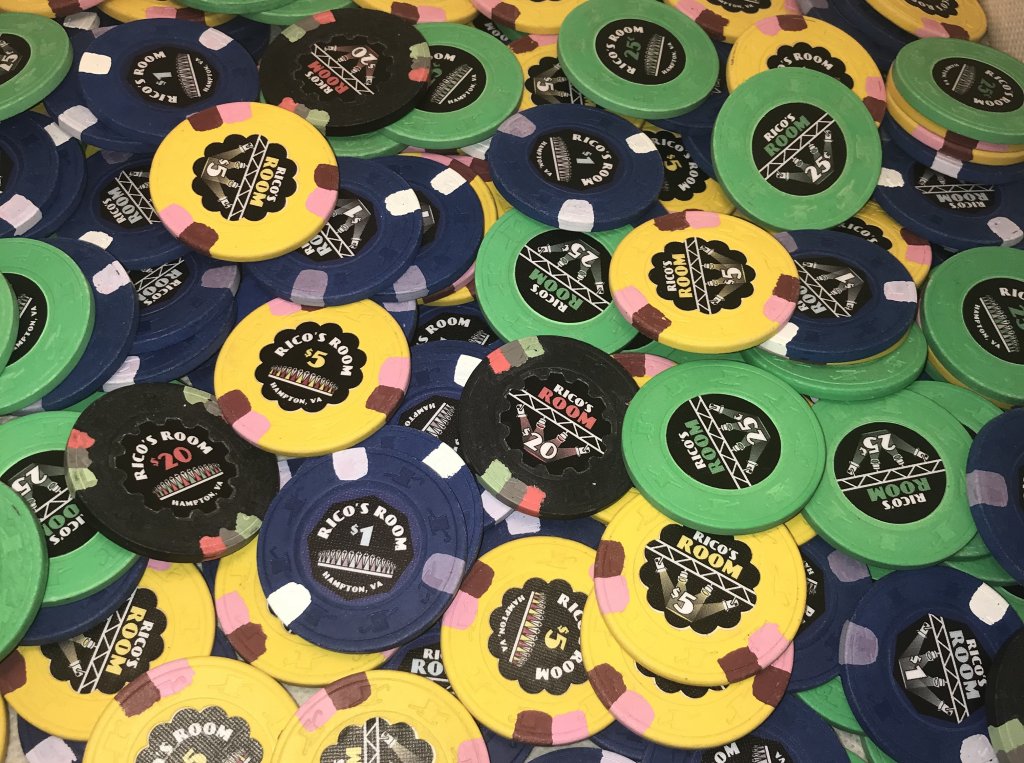 It’s been awhile since the original thread, are these going in play at your place or going to Pop?

My kids better put similar time and effort into my custom set when they make mine one day!

Christmas gift to him - he basically only plays anymore when I’m visiting anyway and set up a game. Who knows, maybe this set will inspire him to start his own game up.

Sorry for going slow. Will respond time PMs tonight. Cost will be $10 per person! 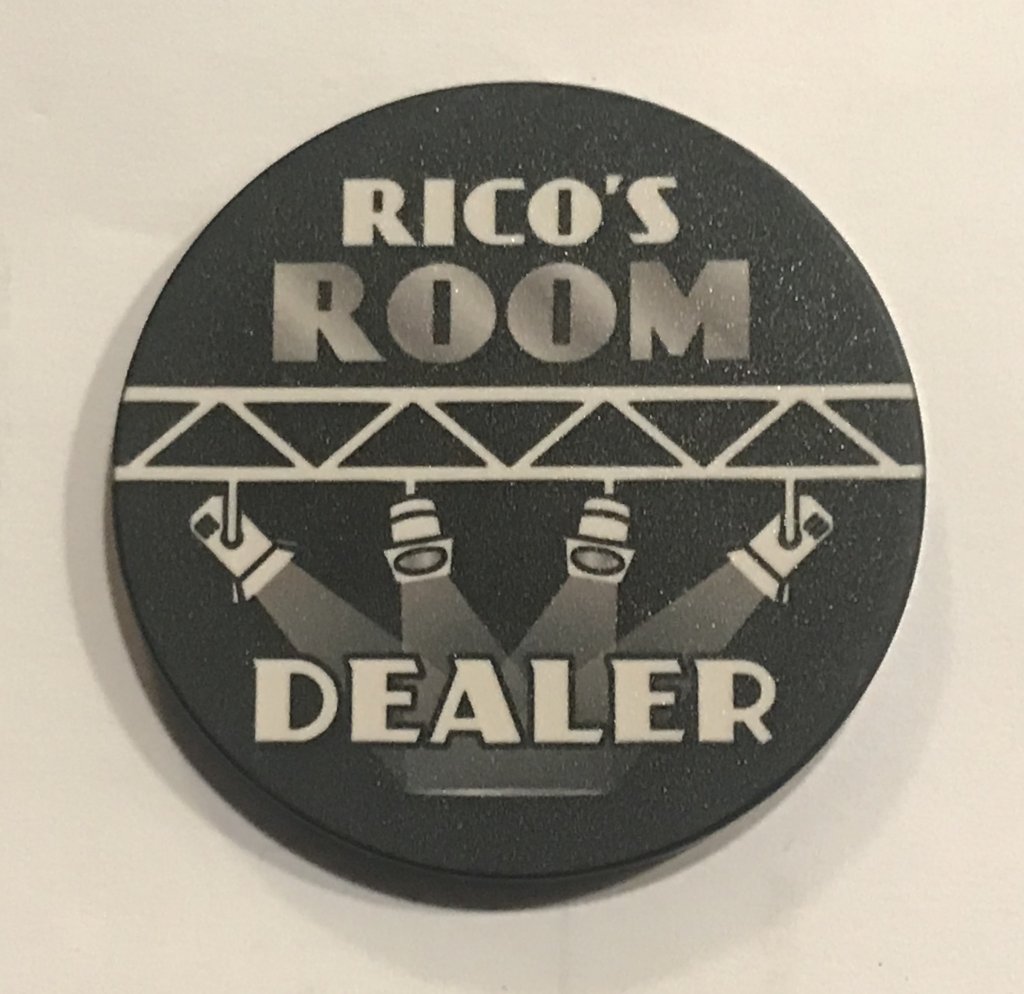 all above were involved in getting those chips, design, or idea in some way
Click to expand...

Was going to try to surprise y'all with a 3-chip sample set, but tracking down addresses is not going to be time-effective for me.

If you guys are interested just PM me your address and I will get them out one day. If you aren't interested, just let me know if you could because there are definitely some others that I have in mind as well and these are all the extras I have.
You must log in or register to reply here.

Help with a casino name
2 3