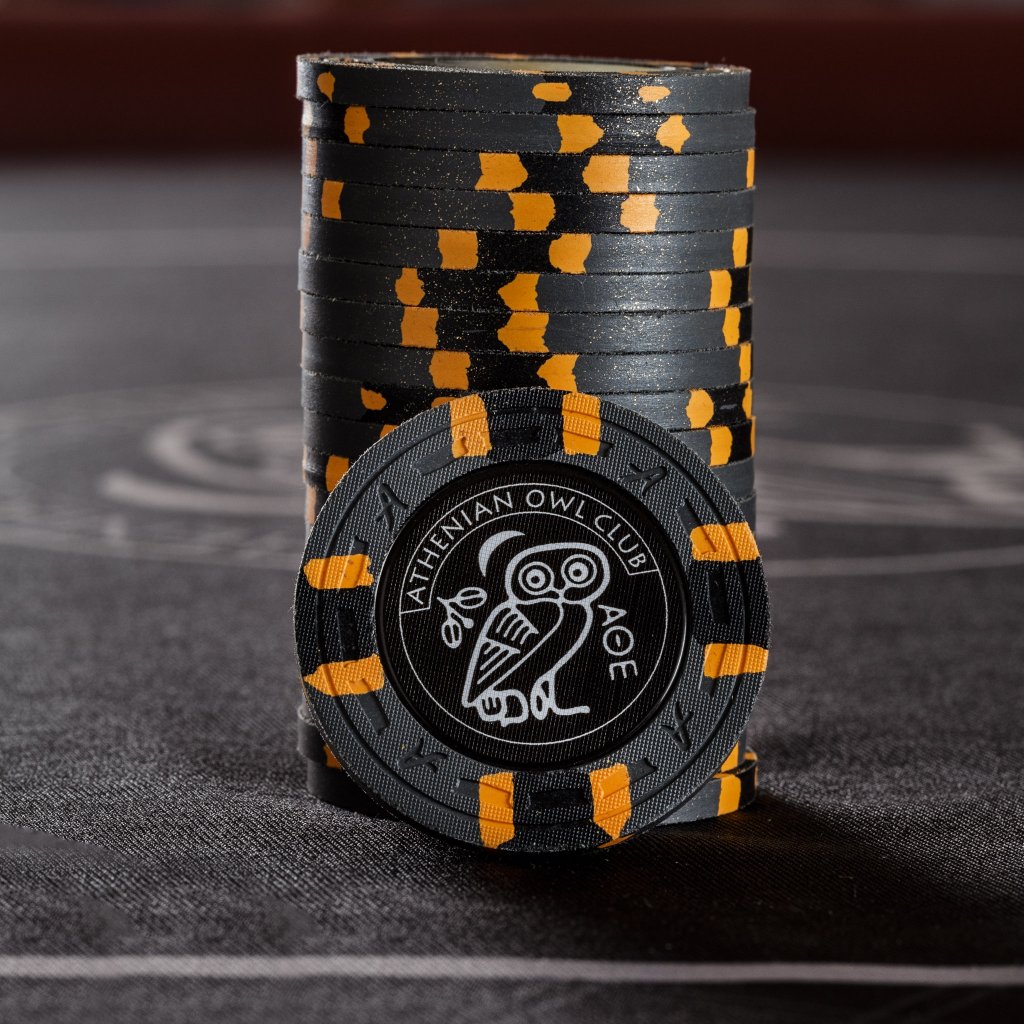 I guess I 'm the first one to expose one's custom inlay to public judgement.
If you like it so be it; if you don't like it, say why

Is there another side? Are these all non-denoms?

I was close to a 4, but I don't personally like ncvs, and the owl leaves no space for one.

Mostly a preference thing for me, but it's still a very nice inlay.

Perthmike said:
I was close to a 4, but I don't personally like ncvs, and the owl leaves no space for one.

Mostly a preference thing for me, but it's still a very nice inlay.
Click to expand...

NCV is a deal breaker for me. I'm hoping the other side shows denoms.

Not all NCV, but this chip is NCV on both sides.

I really like the look of it, but it doesn't meet my basic requirements for information on a poker chip -- i.e., denomination and location, so only eligible for a 1 vote. Sorry, but these shouldn't just be art competitions....

Not trying to bash it, but since you're asking for opinions:
I don't like dark inlays, so you're losing a point from me there. I really hate the absence of color, so you're losing another point. The lack of a currency symbol tilts me - I don't expect a dollar sign, but why no drachma symbol, or euro, or whatever you guys use. The owl is cool, and I like the club theming, so I'll give it a 3, but it's much closer to a 2.5 in my opinion.

RainmanTrail said:
Is there another side? Are these all non-denoms?
Click to expand...

I made the frac AND the Top Value chip to be NCV, out of currency insecurity in an unstable world.
The 1, 5 and 20 are denominated. 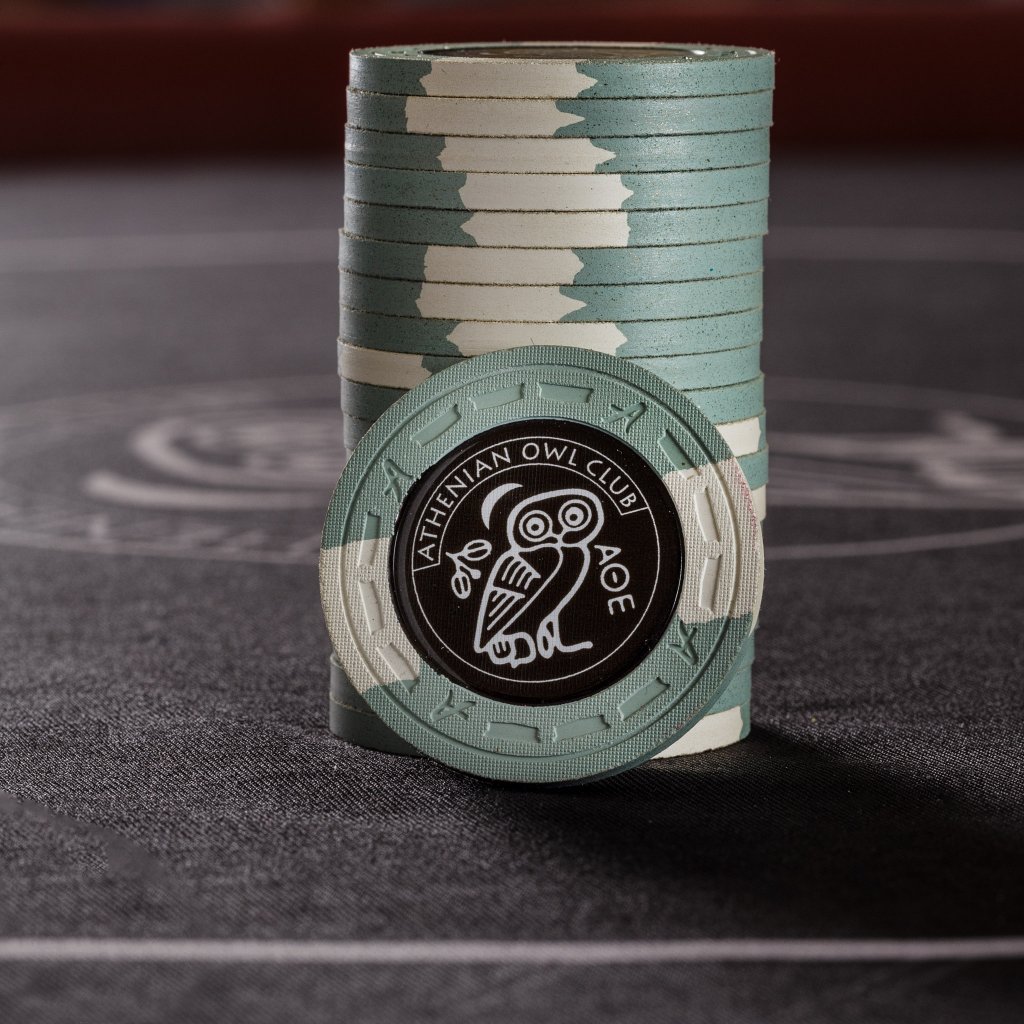 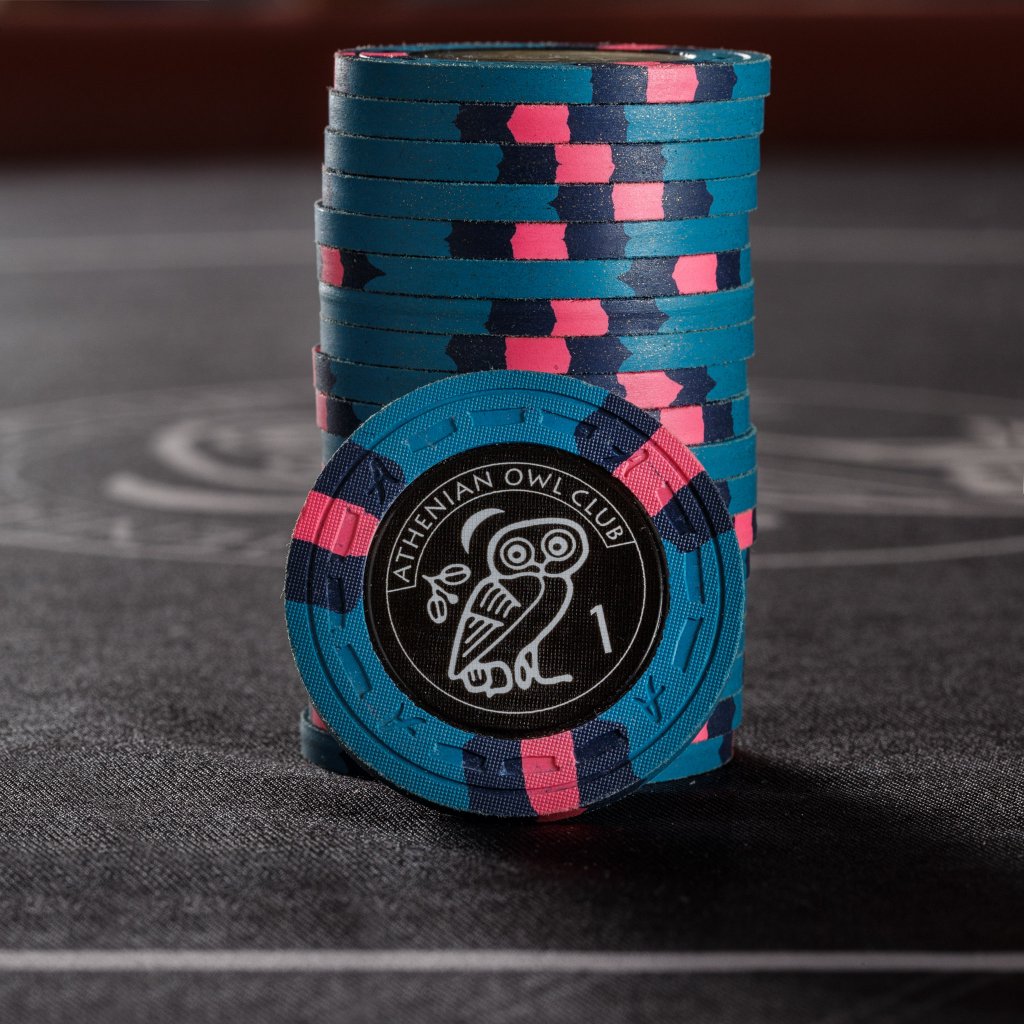 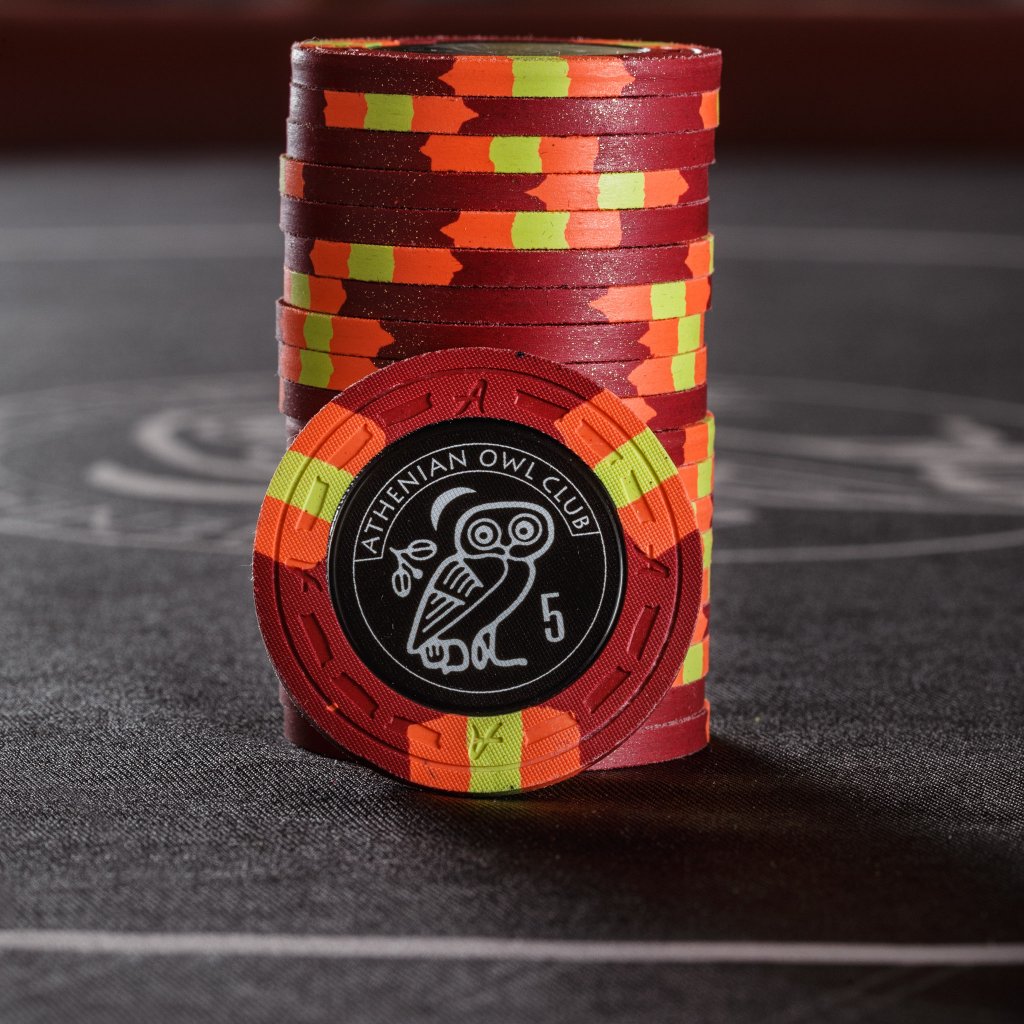 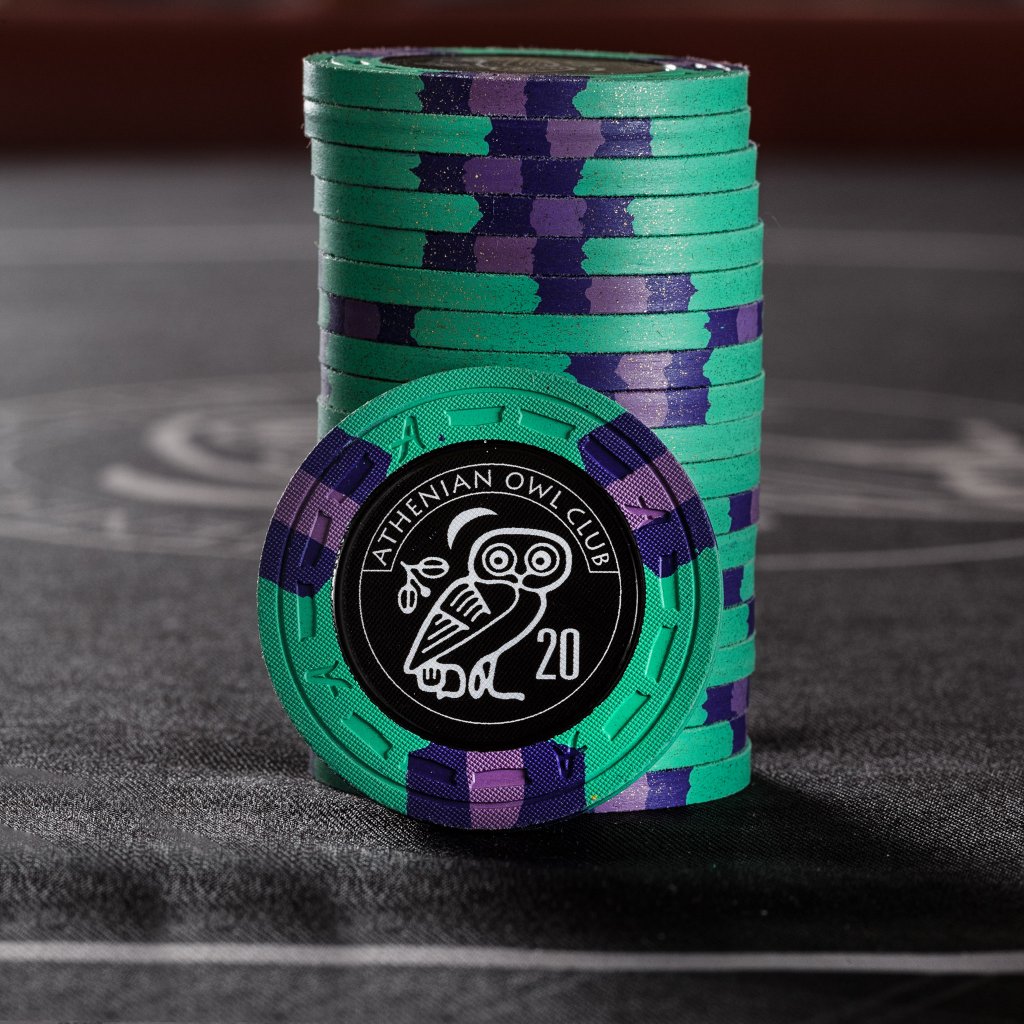 Coyote said:
I made the frac AND the Top Value chip to be NCV, out of currency insecurity in an unstable world.
The 1, 5 and 20 are denominated.
Click to expand...

I suggest posting pics of the ones with the denoms instead then. It's the difference between me voting these as a 1 or a 5 lol. I love the design, but no denom is a complete deal breaker for me.

Assuming the denom version... I like the clean design of the inlay, like the olives, not sure about what's going on where the owl's legs are, like the font for the denom, would perhaps preferred the denom in another color. I would definitely have preferred a small inlay (that is, without the extra black area around).

9 out of 10. Simple, elegant, wonderful eye appeal. Love these!

I obviously adore it but:
-I should have denominated the Top Value chip as 100 (I would have always kept the frac an ND one, though)
-I should have the denominations on one side and the ΑΘΕ inscription on the other, on each chip.
-Inlay size should have been 1in, not 1&1/16
Plus, some humility in the mix, so a 4 from me

That's something I noticed but didn't mention. I'm not opposed to the larger inlay on that mold, if the art benefits from it. But I'm not sure you needed it.
Either way, cool set.

The NCV is deal breaker for me.
But I like the design a lot.
So 3 for me.

I like it, black labels are hit or miss imo, but this works. I think it's the lack of other colors, it will go with any chip color.

Love the black inlay, I am always drawn to dark inlays/labels.
Also not a fan of NCV, but the denominated chips make a difference to my vote vs if they were all NCV
I am also a fan of some sort of color match, but this these is not about that.
Clean, classy, i'll give it a 4, rounding up from my 3.75 vote.

Love the artwork, imo a very cool looking chip. The denom thing tilts me tho.
You must log in or register to reply here.

Are there different inlay sizes on the RHC Mold?

*Round 1a Voting* Athenian Owl vs ClubD
2

Rate This Inlay - The Sun Club