Poll: Should the TCC chips be sold by the rack or by micro-playable sets?

I’ve had some discussions with members via PM who suggested the chips be offered up in mini sets rather than by the rack.

If I did this, more members might be priced out of getting a chance at them and fewer members would ultimately get TCC chips.

Based on the chips below, how should they be offered up?

If you select “mini-sets” please share the ideal breakdown based on the chips being offered up.

As an aside, I’m just now heading back to Texas so won’t be able to respond or read comments frequently until I stop. 30+ hours starts now!

With that breakdown this is a no brainer imo. By the rack. Yeah it would be great to keep at least 1 small set intact and preserved, but like I said before - the chickens are in now in the slaughterhouse.

I wouldn't be able to afford the chips, but I appreciate you bringing more beauties to the game

and hope you will give us the colors of the chips when you have time ,

Is there a shortage of fives? Is that what I am seeing?

Also, seems like maybe offering a limit set or two will cut down on so many ones?

A lot of sample sets!

This huge set of chips is going to be attractive to a lot of people in a lot of different ways. Besides the many ways that someone might want to assemble a playable set, people will probably be happy to take chips of any denominations and murder them in order to make sets out of denoms that wouldn't normally work as a set. But the problem is that nobody is going to know what they really want because they won't know what they're going to be able to get, given everyone else is going to be trying to get the other pieces that they might need.

For a complicated set of possible options like this, I think you should sell the whole thing at once in small pieces via an ascending multi-package simultaneous round-by-round auction, similar to the way that the FCC auctions off rights to the electromagnetic spectrum.


Round One: Everyone who is interested submits to you via PM a "bid list", which is a list of everything they're interested in buying, with prices they're willing to pay, broken down in any way they like, including specifying stuff that they're only interested in as a complete package. An example might look something like this:​
Set a deadline for submissions. Once all the submissions are in, go through them and - eyeballing it, you don't have to use an algorithm for completeness - identify the combination of pieces and bids from all the submissions that will maximize the total sale revenue. Publish the bids and bidders that make up that combination as the "provisional winners". Start the next round.​
​
Round Two: Anyone who wants to can submit a new bid list. Anyone who's already submitted a bid list can update it any way they'd like, except that they cannot lower the price they would pay for any particular item that they've already submitted. They can raise it, though, and probably will want to if they weren't among the provisional winners for something they wanted.​
​
As before, set a deadline for submissions (probably one day for each round is good). Go through the submissions, and again eyeballing, see which combinations of bids maximizes the sales revenue now, given everyone's new and higher bids. Publish the new provisional winners.​
​
Further Rounds: Repeat, and keep going until there's a round in which no one submits any new bids. When that happens, the current provisional winners become the actual winners, each one getting the specific package that they bid on which ended up being included in the revenue-maximizing combination, and each one paying what they bid for that specific package.​
---

If you want to ensure that the chips are widely distributed among different chippers rather than letting a single buyer get the whole thing with a ginormous bid, then impose whatever maximum you think is appropriate, like "no more than 500 chips to any one person" or some such.

Since you want to sell these chips at your cost without asking for anything more, you could commit to donating the proceeds from the auction above and beyond your cost to a charity. I suspect these chips are worth a good bit more than your cost, and using an auction to realize that extra value and donate it to a good cause would be a great way to get these chips into worthwhile hands.

ImCrossland said:
Based on the chips below, how should they be offered up?
Click to expand...

I read the poll question and insta-answered mini sets. I am personally a fan of the idea that some playable breakdowns would be out there, even if only offered as a heads up set, with any other extra racks sold off separately.

But after reading on and seeing the breakdown, I would change my answer to racks and barrels. The two racks of $5s and lack of fracs swayed my opinion.

I have never buit a heads up set before, but I imagine it would look like any decent 10 man breakdown divided by 5.

But I think the point is now moot. With no fracs (apart from the NCV relabel candidate) and two racks of $5s, I'm not sure this approach makes any sense.
Last edited: Jul 18, 2021

Steppenwolf said:
I read the poll question and insta-answered mini sets. I am personally a fan of the idea that some playable breakdowns would be out there, even if only offered as a heads up set, with any other extra racks sold off separately.

But after reading on and seeing the breakdown, I would change my answer to racks and barrels. The two racks of $5s and lack of fracs swayed my opinion.
Click to expand...

Exactly my thoughts. I change my answer. Also did not realize how few $5's there are. I'd actually hazard to say that what's being offered, if needing to be offered in sets, would work best for a tournament set than cash set.

Murdered NCV 39mm would make an acceptable $5 chip. That's the only hope of getting micro sets out of this breakdown.

ovo said:
and hope you will give us the colors of the chips when you have time ,
Click to expand... 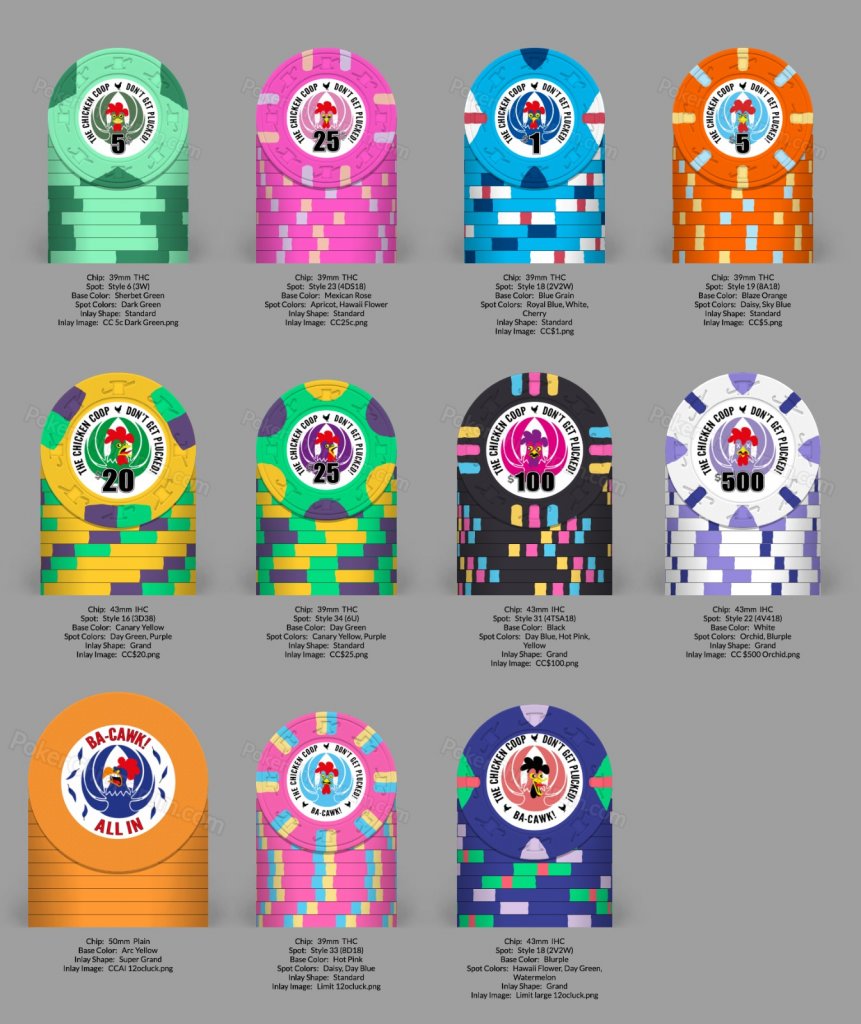 I'd just auction by the rack, they will just get flipped again anyway at $1500 a rack. Cut the middle man.

What can I get for about tree fiddy?

Josh Kifer said:
What can I get for about tree fiddy?
Click to expand...

A full colour print out of this

davislane said:
A full colour print out of this
Click to expand...

Not shipped from Australia. I just sent the kid a hoodie for her birthday and shipping was six times the cost of the hoodie.

I would probably buy a rack if I had to, but I'm interested in by the barrel for some denominations

Dibs on a sample set.

Don't forget an extra 30 cents per chip for Gear labels!
You must log in or register to reply here.

Filling gap in my Chip Set