Like others during this pandemic, I am spending more time at home. I have spent part of that time thinking about whether or not we will have the same number of players at Wednesday night's tournament when we resume playing. Whether or not I want to get back into hosting or buy a set-up of Da Vinci cards to switch out with the Copaq's, etc., etc.

I also thought about the number of different home games I have played in, the handful of tournaments that I have won at casinos (4), and the memorable players I have met along the way. It occurred to me that I have played in over 700 poker sessions at other people's houses and another 175 to 200 sessions at various casinos. I have also hosted close to a 100 sessions, which adds up to a thousand games of live poker over the last twelve and a half years.

My journey began with a twelve player, winner take all, $10 Texas Hold-em re-buy tournament in an unheated basement to finding myself sitting down at $2/$5 PLO tables at Foxwoods.

Pictures from the past year:

No power, no matter.

I have many fond memories, but now I catch myself asking if I should distance myself from poker and devote myself to other things.

Why couldn’t the collar be popped

Break-time MTT at Hollywood. Down to the final table.

Nice end to the session.

Time to punish the limpers.

God mode. Crushed this one. (27 players) 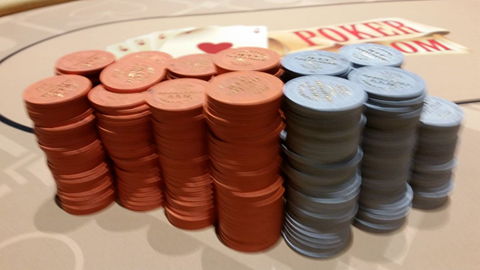 I noticed that you are using Mike Postle’s CTO strategy to play the 72
You must log in or register to reply here.

Cash Game Home Cash Game : What Stake with buyin do u play?
2

A
Tourney cash game after tournament