So previously the largest buyin tournament I've played has been $600. But when I saw the fantastic structure of this event that included:

happening right in my backyard I knew I HAD to play it!

I opted to play Day 1C - Saturday, play began at 11am and with 2 hours worth of breaks through the day we'd finish up around 11pm to bag for Day 2 on Sunday at noon. 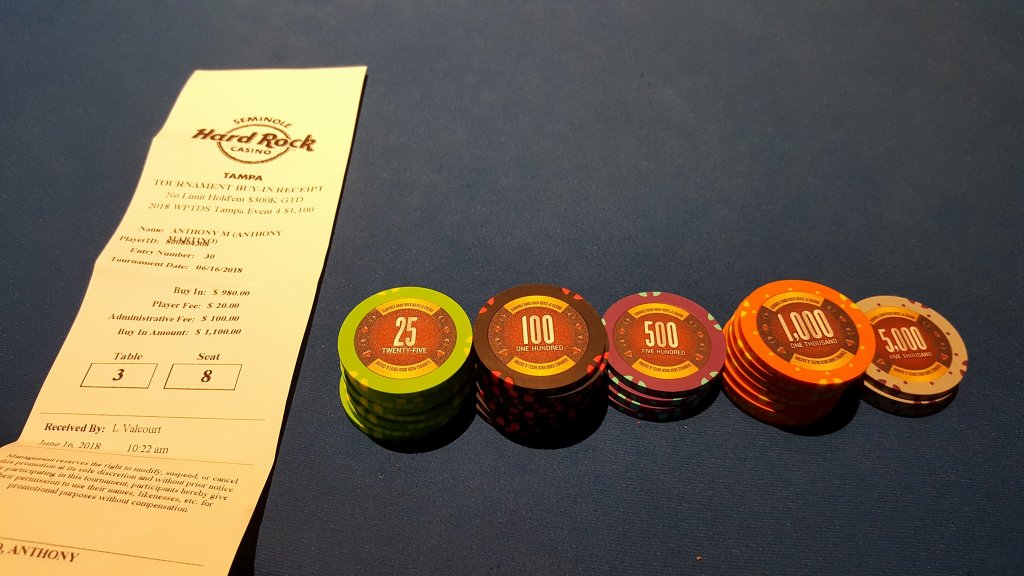 The field was a lot tougher than the typical tournaments I play in the area (whether that's the daily events or the monthly series that are held).

You didn't have 27 people at your table all trying to limp-in and see cheap flops (i.e. lots of passive calling-station type play). There was far more aggression preflop.

I was fortunate that the two most active players were on my immediate right, granting me some semblance of relief.

Early on my approach was to play relatively tight, get to know my opponents and avoid getting involved in very large pots with such deep stacks unless I had the nuts.

The guy on my immediate right was the biggest maniac at the table, although initially he was showing down big hands so I wasn't able to put him on some of the junk he started showing up with. But I had realized his VP$iP was close to 100% and wound up getting a hand to play against him.

He raised pre and I opted to just call with

Normally I reraise in this spot, but this guy was super active and I had position on him and wanted to give him an opportunity to hang himself.

We saw a flop headsup of

and he fired half pot and I called. The turn was the

and he fired half pot again and again I called. The river was the

and again he put out a half pot bet and I just called. Then he flipped over

for the rivered straight.

I could feel the heat rushing to my face, the rage that he was in there with that shit, but more of the anger was directed at me for letting him do it to me.

Shortly thereafter I picked up

and after he and the other maniac limped I raised and fired strong on the Ten-high flop and took it down, resolving to not play the call down game with him anymore.

I then took another hit at the 100/200 level in THIS HAND that I posted about already. I suppose I lost a lot less than I should've, given I didn't range my opponent as having the hand he did and the turn card saved me from being in a position to call off my stack.

Loose-passive lady limps UTG, solid TAG limps EP, folds to me on the button and I look down at

The blinds fold and the two limpers call, pot is 9k and I have just a little more than a pot sized bet left and see the flop of: 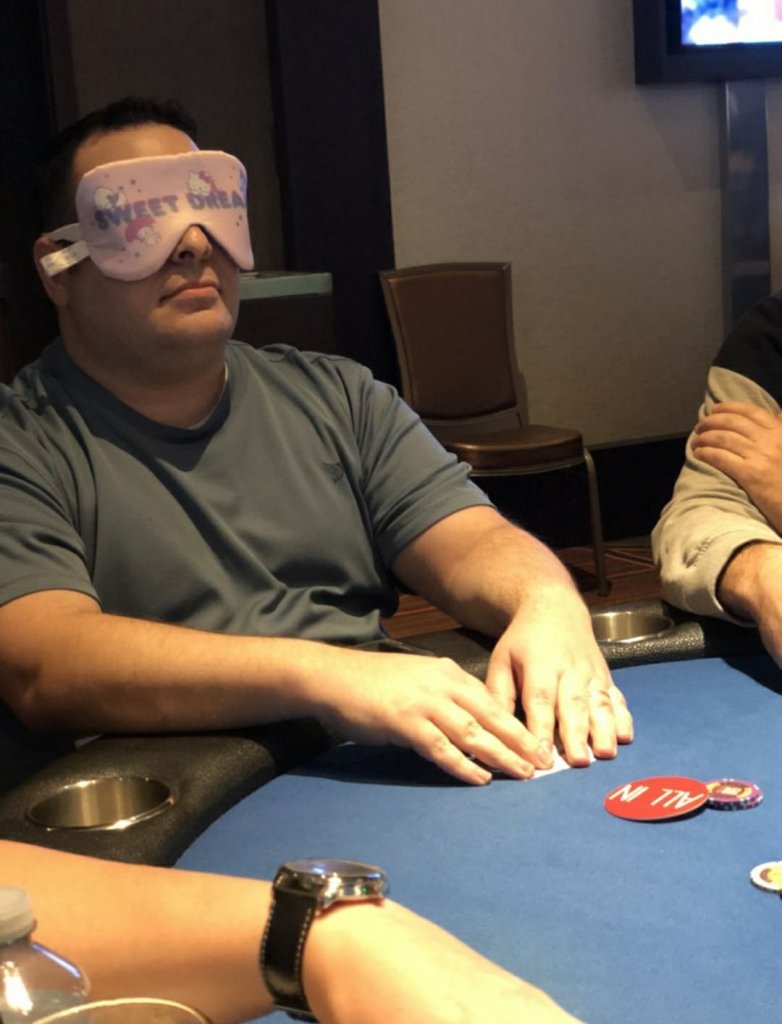 the lady who limped insta-calls and flips over

My hand holds and I more than double up.

and repops. We get it all-in pre and I hold, building my stack back to the average around 44K 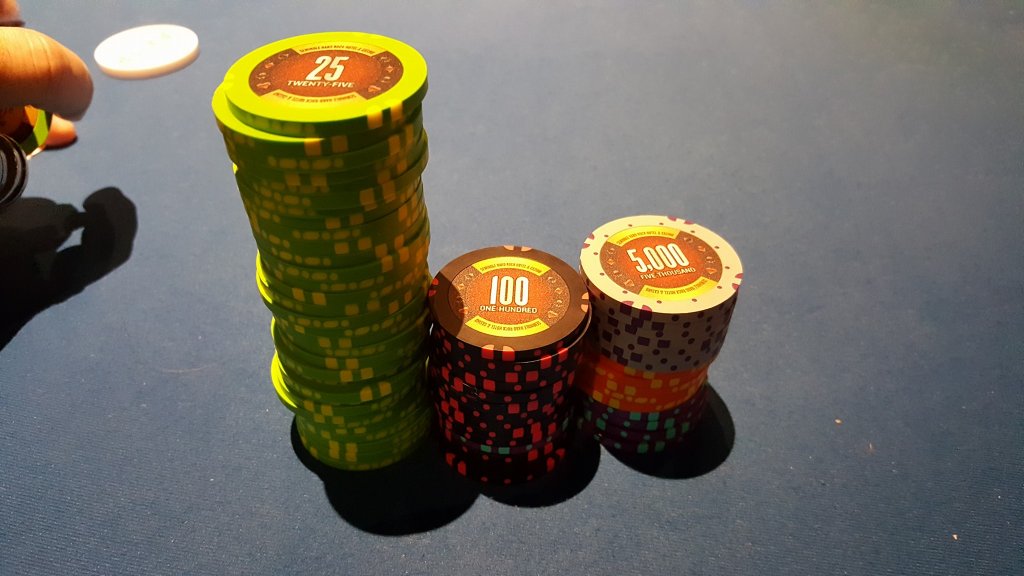 The very next hand I pickup

and make it 1600 again. The TAG kid gives a speech, saying he should be 3-betting me but he learned his lesson last hand and is just going to call. Then another solid TAG I know from other local events shoves all-in for 13-14K.

Given the speech the guy gave I range him on AK/JJ+ (i.e. most likely ahead of me) and given my own image and that of the guy who shoved it's hard to think I'm ever ahead here so I lay down my Tens.

It winds up being

and the flop comes

and I made the right laydown at the wrong time. If I played worse I could've had a stack north of 70k at that point.

The only other hand of note I can recall from that point on was my raising an AJ hand in EP and getting reraised and figuring I was crushed (guy showed KK). After that I had a dealer who was just crushing my soul, here are some of the sequential hands he dealt me:

It was just a non-stop barrage of deuces in the door or a big card first giving me hope I could make something happen followed by a shit kicker. And with the aggression at this table as the norm I didn't have the chips or opportunity often to make a play for the pot.

The night wore on, we were on Level 14 with about an hour left to play and my stack was just bleeding. I opted to not shove

and I would've flopped the Ace.

Eventually I made a couple of shoves preflop and they got through, building my stack from sub 10K back to 21K. But with Level 15 now in effect the blinds were 1200/2400 with a 400 ante I was still on life support.

UTG I made the shove and ran into

and didn't improve. My night ended with about 30 minutes remaining to bag for Day 2.

But on Day 2 we'd be coming back to 1500/3K blinds with a 500 ante, and approx. 80 of the 130 returning players would cash so I didn't want to be returning on life support, was trying to get semi-healthy.

All-in-all, it was a fun experience. The structure was AMAZING and I've added this to my must-play for next year. The guy who won one of the $350 prelim events also wound up winning the Main Event, pretty impressive and goes to show that skill plays a huge part in a structure like this. 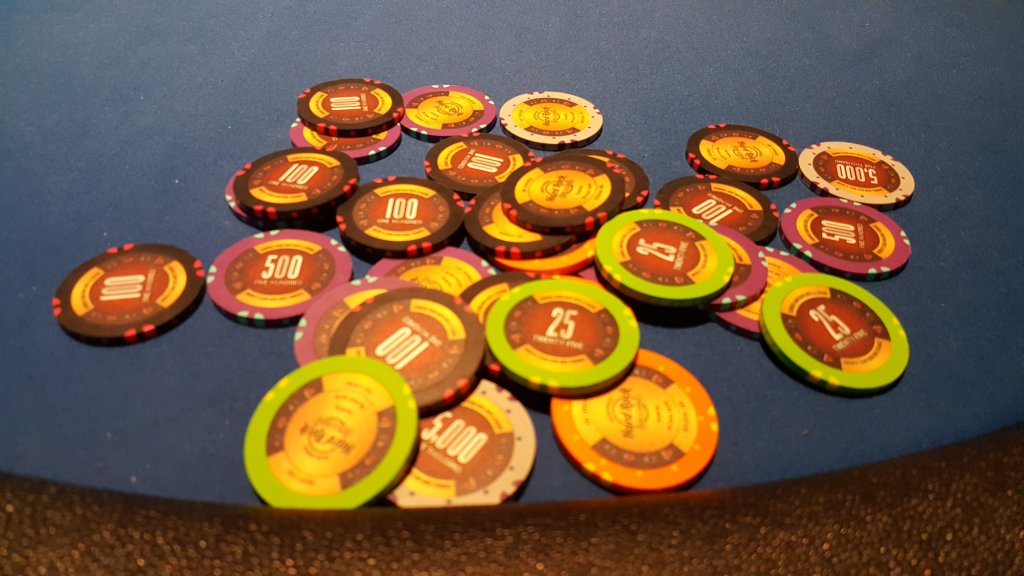 Who took the kitty picture?

moose said:
Who took the kitty picture?
Click to expand...

Guy named Brian Torok who was at my table. We've played together before, he tagged me on Twitter

thats funny my last name is Torok. Its not a common last name

Anthony Martino said:
Checked to me and I put on my Hello Kitty sleep mask and shove it in

I used to have one that said "shhh, the princess is sleeping" but can't find it anymore

Was angle shot at casino - ethical, unethical? you decide