My Wanderings as an Amateur Poker Player (2 Viewers)

MathijsVS said:
Well, my Aces got cracked by pocket 4s, my bluffs were called and my value plays were ignored...

6$ down the drain and not sure what I could've done differently.
Click to expand...

I take what I can get. Live poker never was a big scene in Belgium, most casinos only offer high stakes tables (if any) and homegames have been hibernating since Covid
M 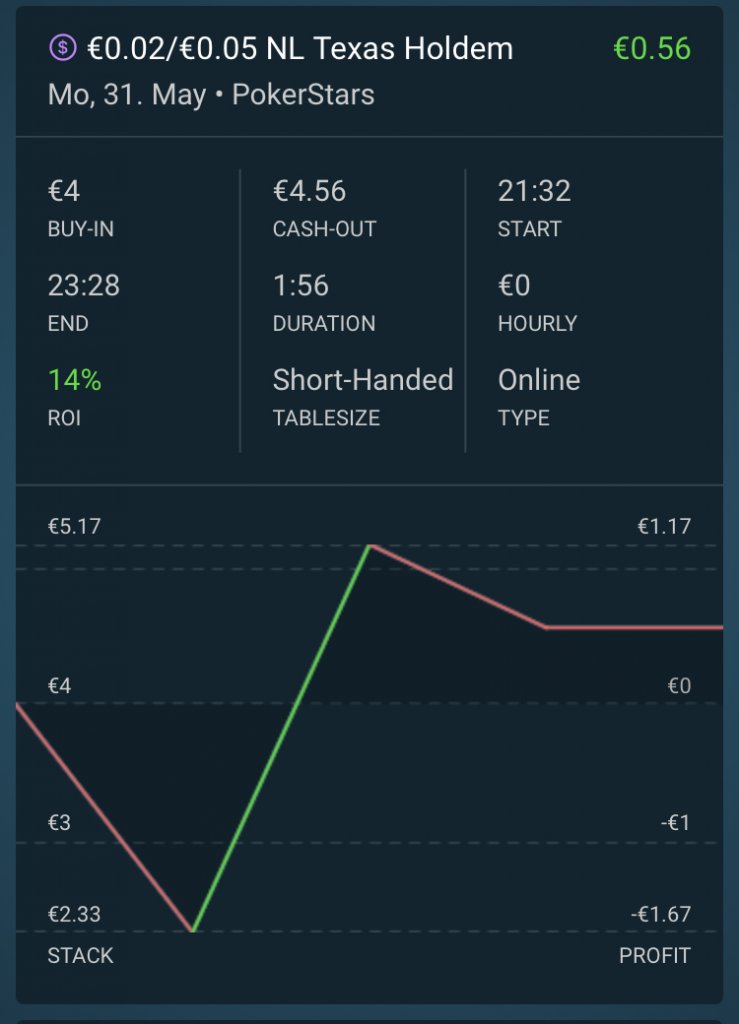 This one was a rollercoaster.

I started off playing disappointingly weak. Ignoring opening ranges and positions and trying to bluff in micro online. It doesn’t show on the graph, since I update it by hand whenever I think of it during play, but the low point was around 92c (12,5BB, aka shitsville).

At that point I decided to cut the crap, tighten my range and no more bluffing. Went back up to 3,5 (70BB). Then I realized the Spanish guy on my left was a bit of a calling station who had a tendency to chicken out when people kept firing on the Turn/River.

So whenever he was in the blinds and it went round to me (we were often shorthanded, even at 6max) I used any two decent cards as a stick to beat the crap out of him like some obscene cash-dispensing piñata. That lasted to around 6,90 (plenty of BB’s ).

At which point I lost two big hands to people getting their One Time River (Aces cracked by K7 on a T73-4-7 board was the last one...) and I decided to call it quits.
I knew I’d be chasing lost profits and those two hands messed up my resolve to play solid, so best to take the tiny profit and call it quits.

Decided to pick up an our of 6-handed NLHE, went up to 5c/10c from my regular 1/2 and 2/5 since I got tired of walking into everyone and their grandmother just gambling 5 bucks real quick. Skill level at the table isn't an amazing amount higher than usual, but it's noticeably less Russian-roulette-ish

In for 6.50, and as per tradition, I start out by playing like an idiot and go down to 4 real quick. I really should do something about the way I play my first 75 hands, this is becoming a cliché...

I get dealt pocket pairs at least 10 times over the course of the hour, and never seem to be able to cash in on them. Until I get dealt

I bet .90, which is on the lighter side, but I want to give him an opportunity to call, and he does.

I decide that since the other player is rather passive, only calling or checking whenever he can, there's little reason to hold back and push all in for my remaining 2.40 into a 4.30 pot. Opponent folds and I take it.
Ended decently, but what do you guys think? Did I leave money on the table? Was my Turn-bet to low? Should I have shoved? Always love to see feedback

I tighten up the range, and pick up again, past break break-even to 7.2x. Unfortunately Miguel the Cash Piñata doesn't have any relatives at this table, so no easy target to just cash in from once or twice every orbit. Some up and down swings after, but nothing really interesting for a while.

I get dealt pocket Jacks later on, we go heads up into the Flop and it comes QJ7-7-3

I set a 1h timer to play, to make sure I got back to work in time, so unfortunately I had to quit the game.

Not sure what to think of the higher stakes. The level of play is a bit healthier, but it wasn't my original plan to go up until I consistently won on the lower ones, but that just doesn't seem like a great stepping stone. On the other hand: this hour didn't end particularly in my favor...
What do you guys think?
You must log in or register to reply here.