Intro
This pr0n is covering my very first Paulson chips. I bought my first chips end of 2015 and finished the set around mid 2016.
At this time, I had (in fact I still have) a set of Dunes Commemorative chips and wanted to get compression-mold clay chips.

My first choice was to go for "home / fantasy" chips or casino used chips. I really liked the idea of have a piece of Poker history and thus I decided to go the used casino route. Also, I decided to build a cash set which was more affordable and easier to build as a first set.

Regrets
So during my quest, I - now with a lot of regret - did not pull the trigger on those classifieds:
Breakdown
Before starting to buy chips, I had to decide on the breakdown. I wanted my set to cover small stakes (nickels or dimes based). I needed to cover NL10 (5c-10c) and NL20 (10c-20c).
So for the smallest denomination, I decided to use a chip without value which I would use as 5c or 10c depending on the game (NL10 vs NL20).
For NL10, I needed a 25c chip.
For NL20, I needed a 50c chip.
And $1, $5 and $25.
I then ended up with the following breakdown:
I also targetted to pick a dealer button with a casino artwork.

Chips
NCV from the Cherry casino (Sweden)
These were the first chips I got. I was happy to find a solid pink chip without value and coming from a real casino.
My other option would have been Starburst (but then they would not be real casino chips) or roulette chips.
It seems that those are roulette chips which were used on a cruise ship.
I bought a lot of 150 of these chips and sold 50 of them to just keep one rack.

25c from the Lakeshore Inn Resort and Country Club (California City, CA)
This place is now abandonned as you can see on the following videos video1, video2, video3, video4
I initially bought a rack of these and recently (early 2019) a second one.

50c from the Fitzegeralds (Reno, NV)
I really wanted in my set a chip coming from Reno.
This place is now closed. There is this video showing the closing of the casino's doors.
I bought a rack of these and recently (early 2019) a second one.

$1 from the Prosperity I Cruises (Venice, FL)
These chips were used on the Proposerity I Cruises ship which was based in Venice, Florida.
The ship sunk due but chips could be retrieved.
I bought a rack of these and an additional barrel later (in 2018). The chips are the most used ones in this mixed set.

$5 from the The Post (San Jose, CA)
These are - with my Lakeshore Inn 25c - my favourite chips of this set. The Post was a small card room which operated for less than 1 year in the 70's.
At some point, I hesitate to sell the other chips of this set and only buy The Post chips. Maybe I'll pull the trigger if a complete set now comes for sale. I however own a complete sample (5c, 25c, 50c, $1, $5, $20 and PAN).
At first, I thought they were Paulson but I discover later that they are Christy & Jones.
Initially I only bought 40 of these. Hopefully I have been able to find 2 extra barrels after they were out of stock at @Spinettis Gaming.
I recently purchased 2 spares of these.

$25 from the Silver Star (Las Vegas, NV)
I could not build a classic set without picking a Las Vegas chip.
I liked the chip and spots colors so much that I finally pull the trigger on these expensive chips.
I bought 2 barrels of these and recently 2 spares.

All the chips have been cleaned (bath of warm water + "Chip Cleaner" powder) and oiled.

entertaining post. Thanks for sharing. Now get the pictures posted

Pictures have been posted.

This is fantastic! I especially like the Cherry NCV!

I like this set a lot. The fives feel a little out of place. The pink edge spots tie everything together. The 312 edge feels a little big too me for this set. Both of those fracs!!!! WOW

I’m hunting for more. ;-) They don’t come often in the classifieds.


detroitdad said:
I like this set a lot. The fives feel a little out of place. The pink edge spots tie everything together. The 312 edge feels a little big too me for this set. Both of those fracs!!!! WOW
Click to expand...

Thanks ! The black $5 is a little bit strange indeed but I really love it with its pink spots. Also, it’s really old school with the denom on one side and the name of the card room on the other. 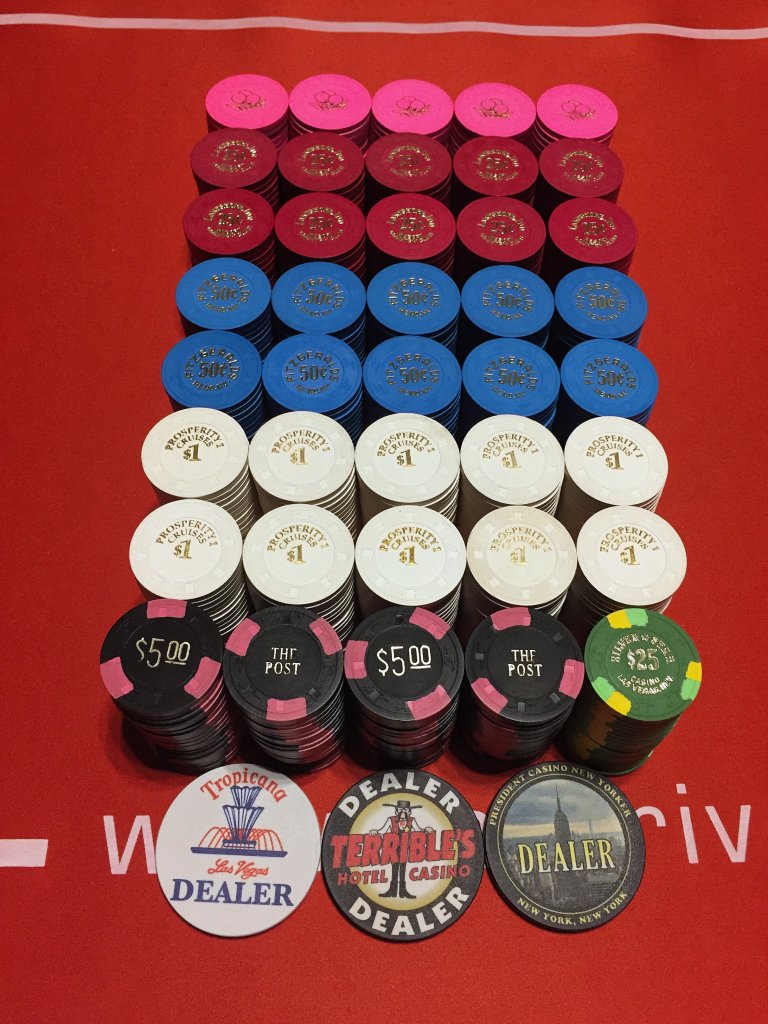 Thank you, these were my first Paulson chips. Started the set in 2014, almost decided to sell and finally have extended it recently.
Very happy with the result and final breakdown !

These chips got some action yesterday after our tournament. NL10 game.