Teaser. To be revealed for the first time at https://www.pokerchipforum.com/threads/degen-in-dallas-ii-weird-flex-but-okay-aug-24-28-2022.88472/

Inspired by @meatboy (with his permission). Hot stamp design by the incomparable @Johnny5. Stamping by @ekricket in I believe his first stamping job.

This is part of the set. I picked these up over ten years ago with the intention of hot stamping them. This initial order came from pokerchipsonline after the mold wore out and they were clearing them out in Jan 2012. $40 a rack. 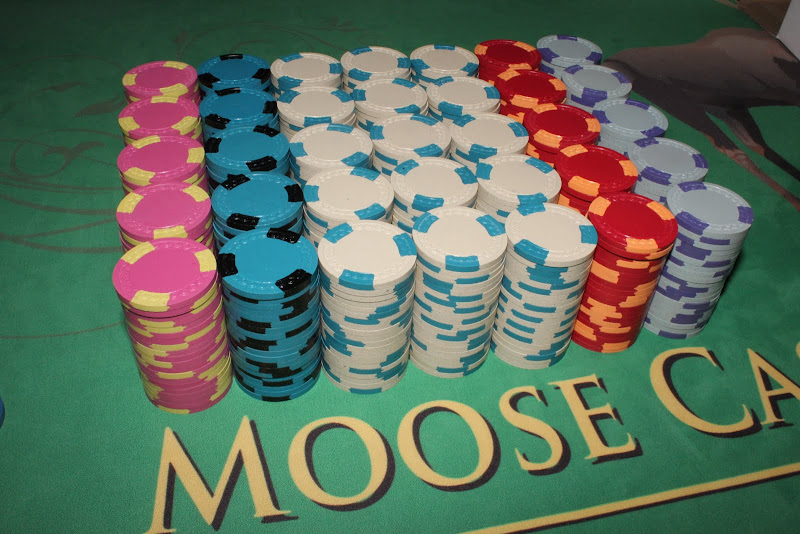 Over the years I acquired 3 more racks of red (one rack is mandarin red), a rack of black and a rack of blue for a total of 1200 irreplaceable Roman molds. The mold wore out and CPC isn't going to remake it. 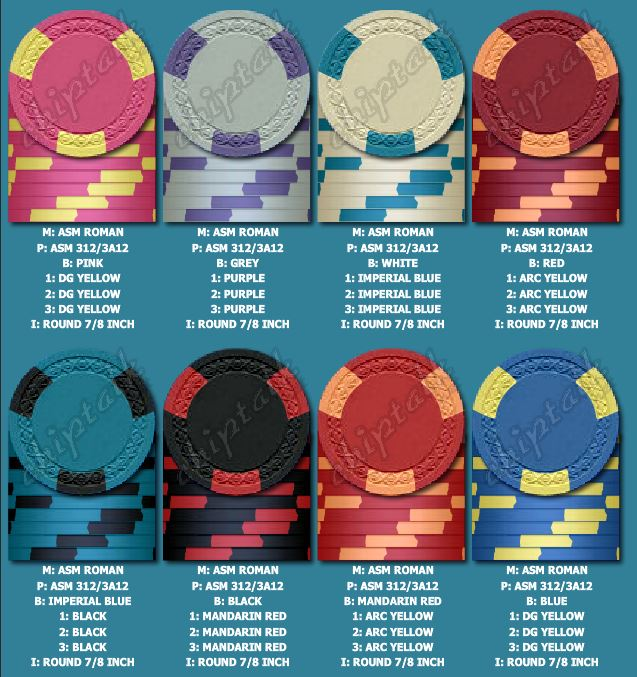 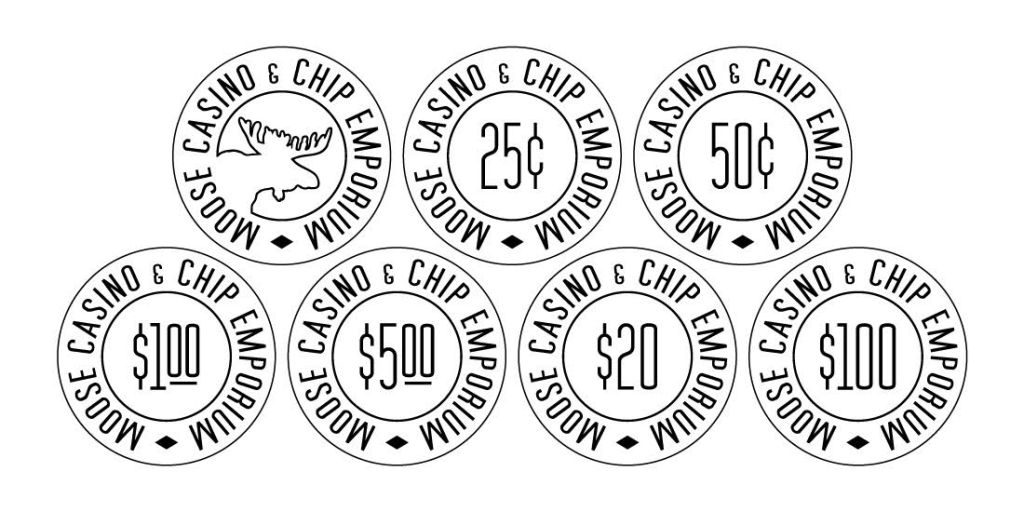 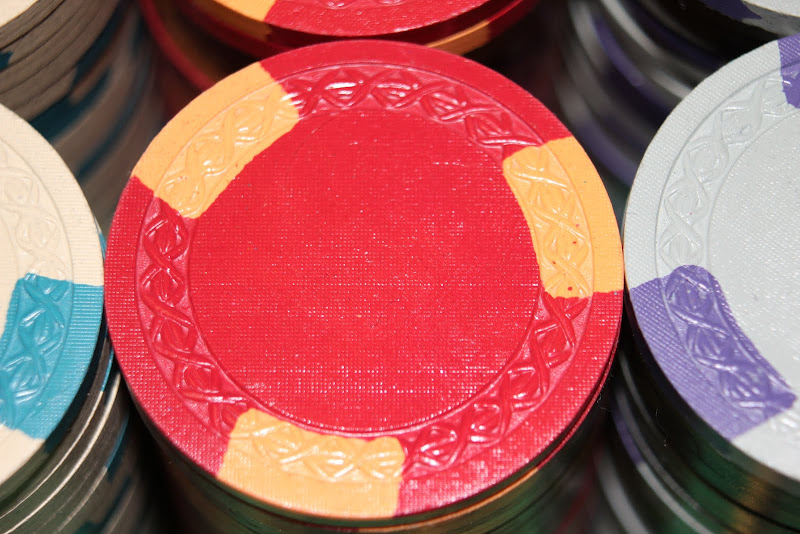 I love this colour combo. 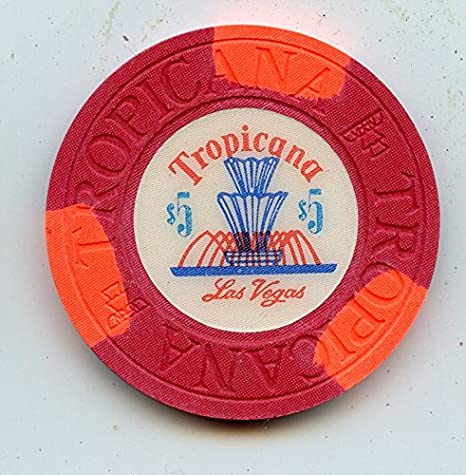 As I said, this has been more than 10 years in the making. I got close to having these hotstamped by @monkeydog. But he got busy and got out of the game, eventually selling all his stuff to @AK Chip

I sort of gave up on hotstamping them in the meantime. I even had @Gear make up some sample labels. 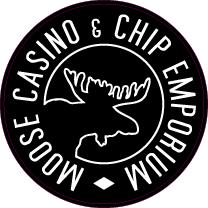 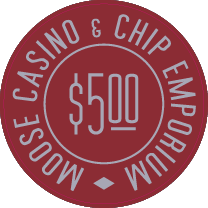 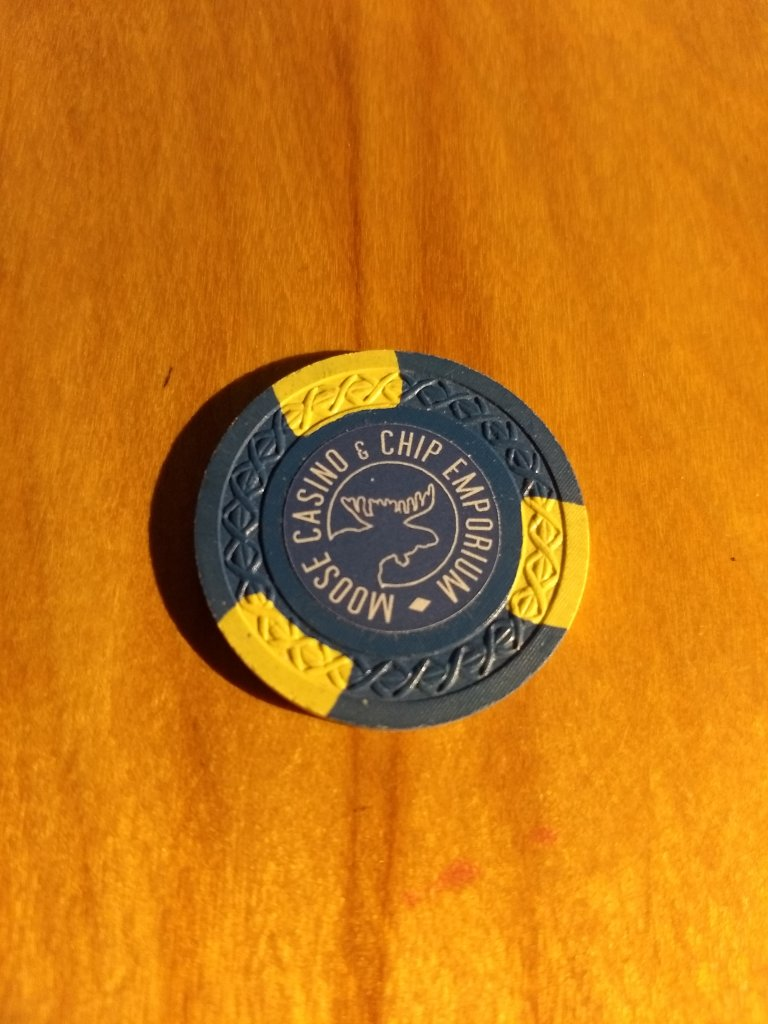 But Roman molds typically don't have a recess so labels were a no go because every chip would be a spinner.

Anyways @AK Chip had acquired @monkeydog's stamper in 2019 and he started playing with some of the dies he found in the box.

Lo and behold he started stamping chips with dies I had no idea were ever made. 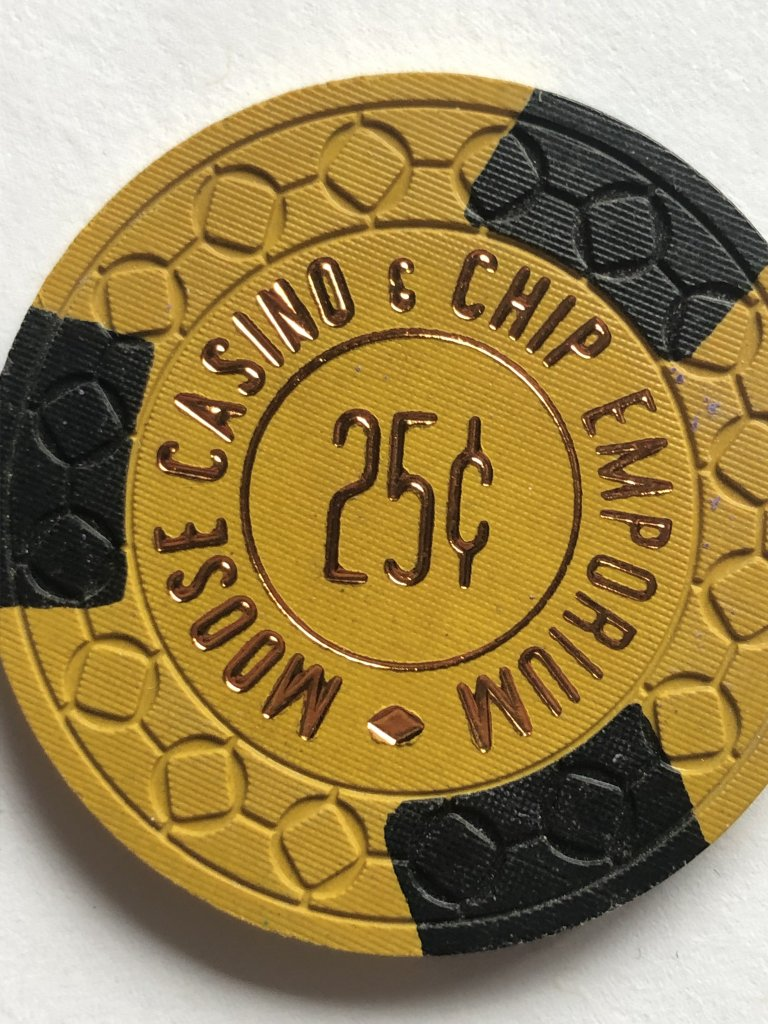 So fast forward to 2021 and @AK Chip and I agreed to get these made. I brought them down to the Affair in Angel Fire II. But at the meetup @ekricket
had just bought a hot stamper so we agreed that I would leave the chips there and he would do the stamping.

New dies were made and the long awaited hot stamping begun. I was informed today the long journey was complete.

I'm excited to see these!

What a post! I was not expecting to get emotionally invested in this journey from the title. Amazing backstory, and congrats on getting it to the finish line

Another Roman mold sighting. Love the look of this mold!

Nice, ten years in the making!
1

BNM said:
Another Roman mold sighting. Love the look of this mold!
Click to expand...

Totally with you! Such a shame CPC can no longer use the mold. To OP, godspeed 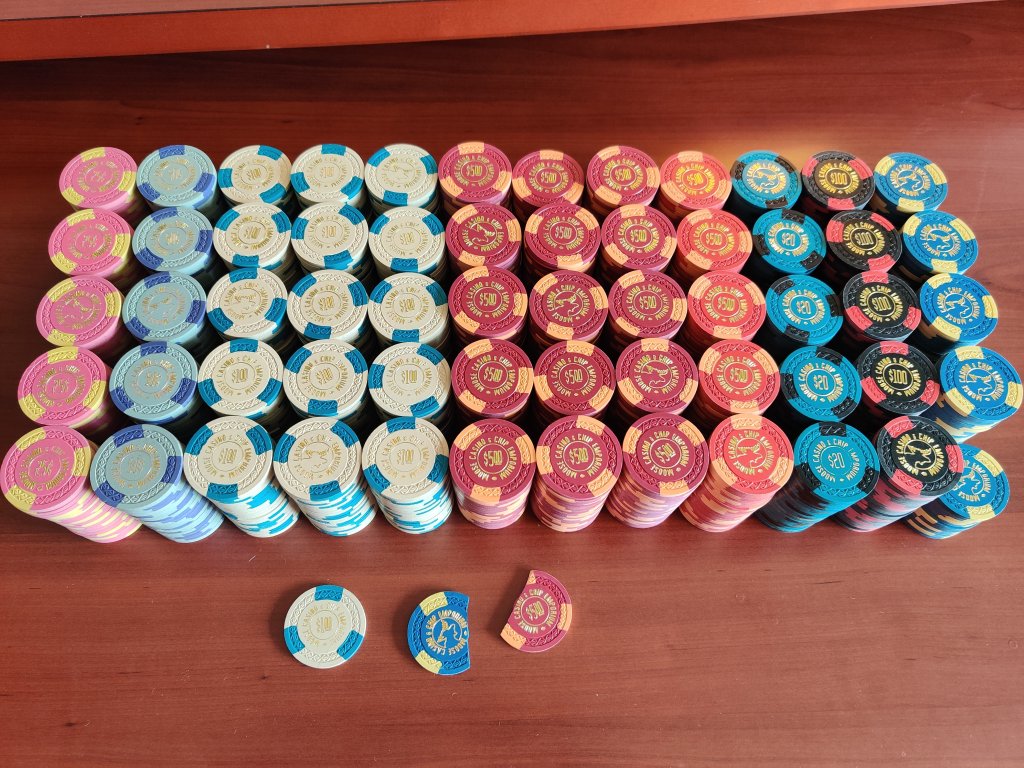 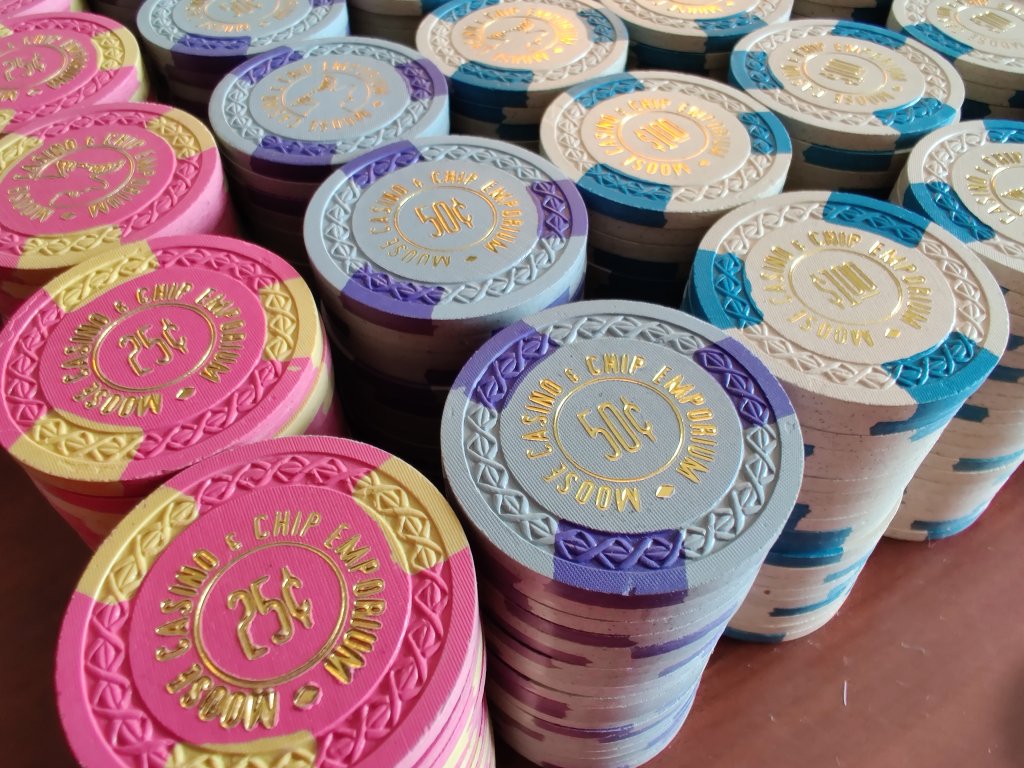 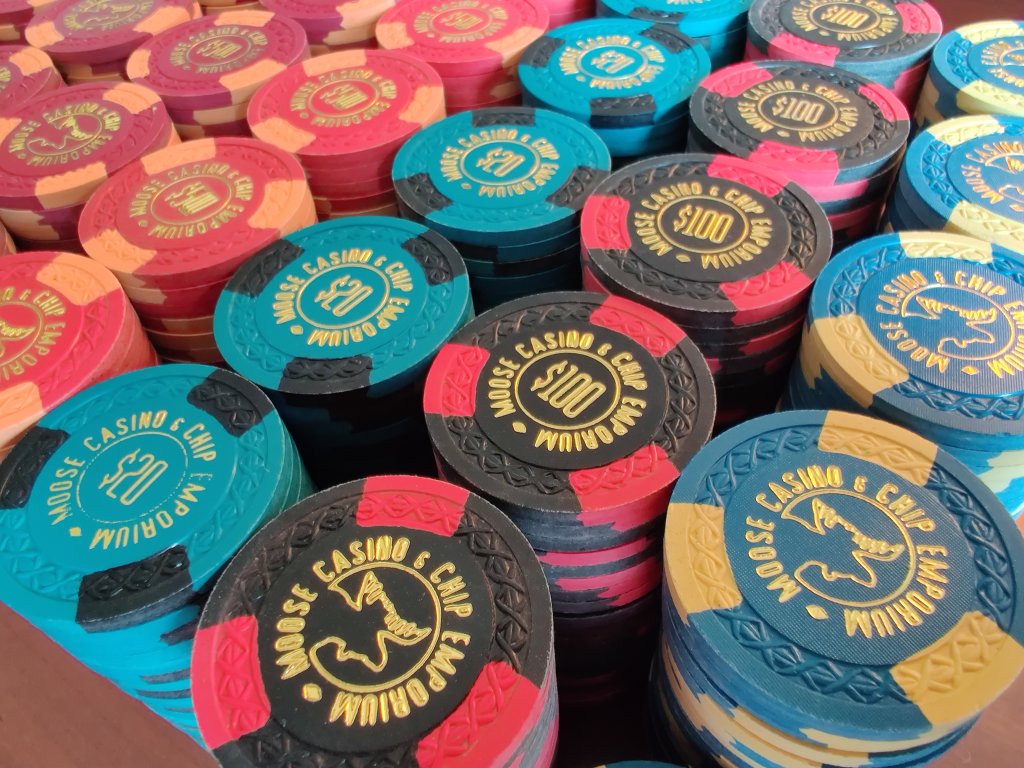 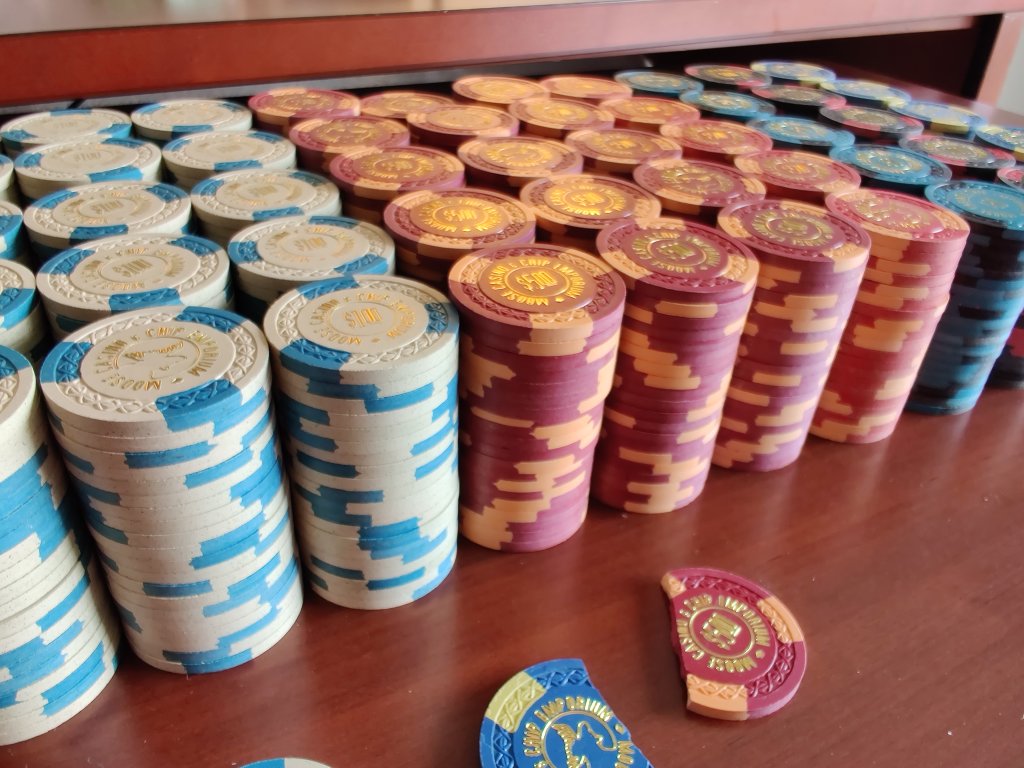 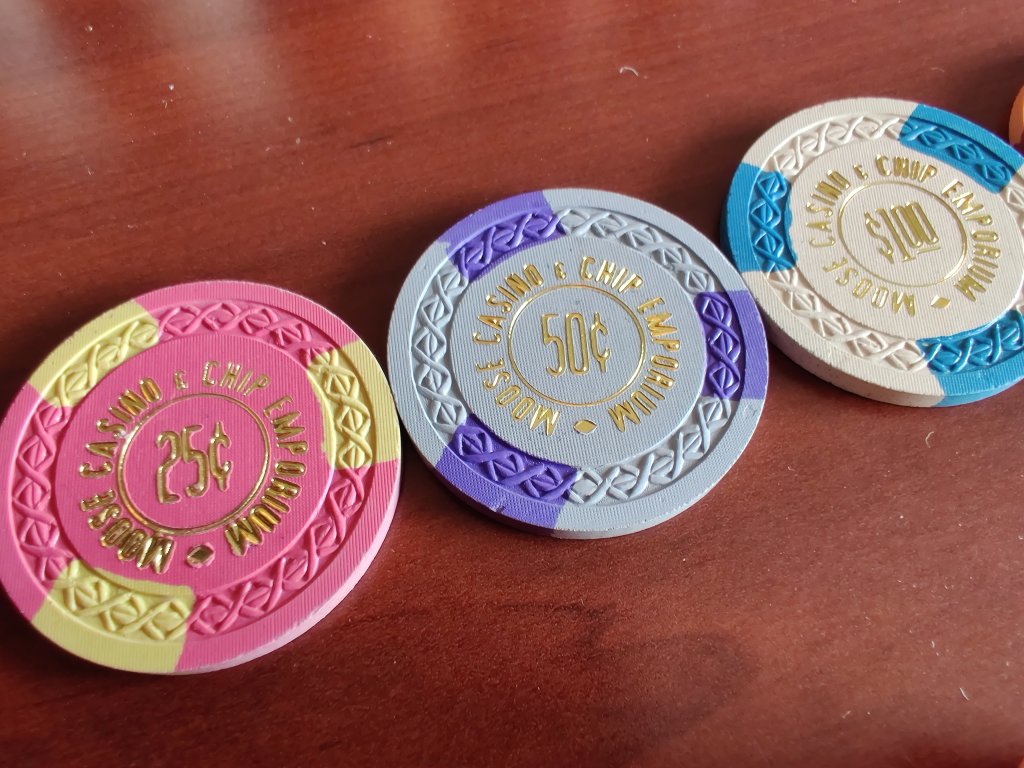 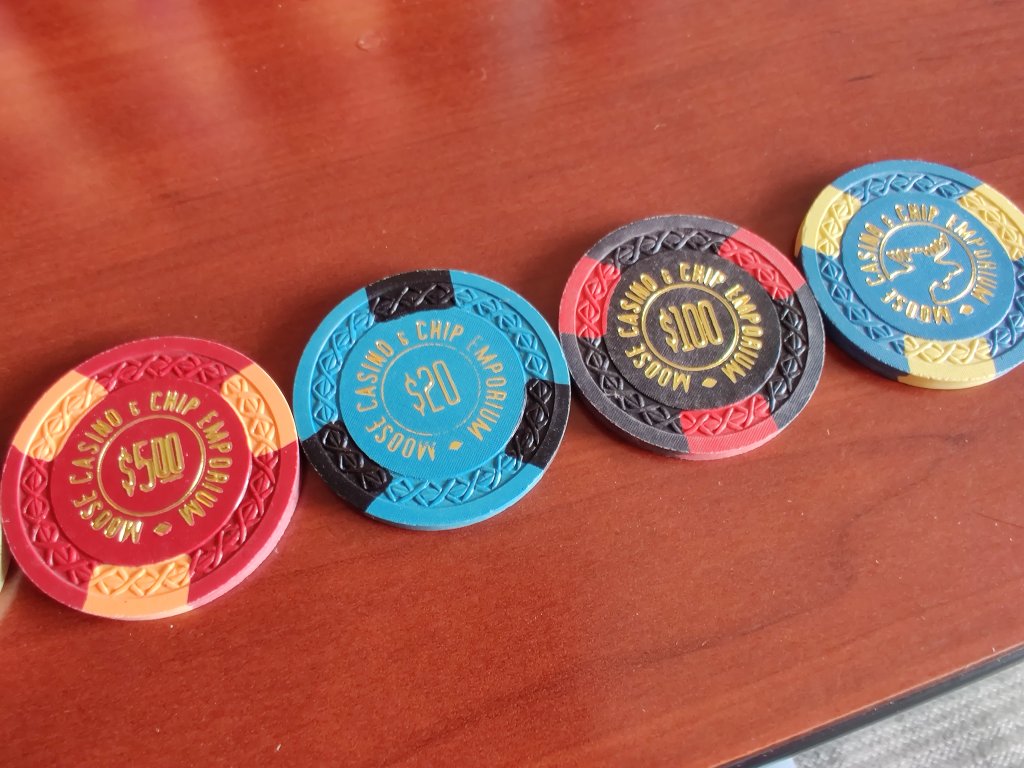 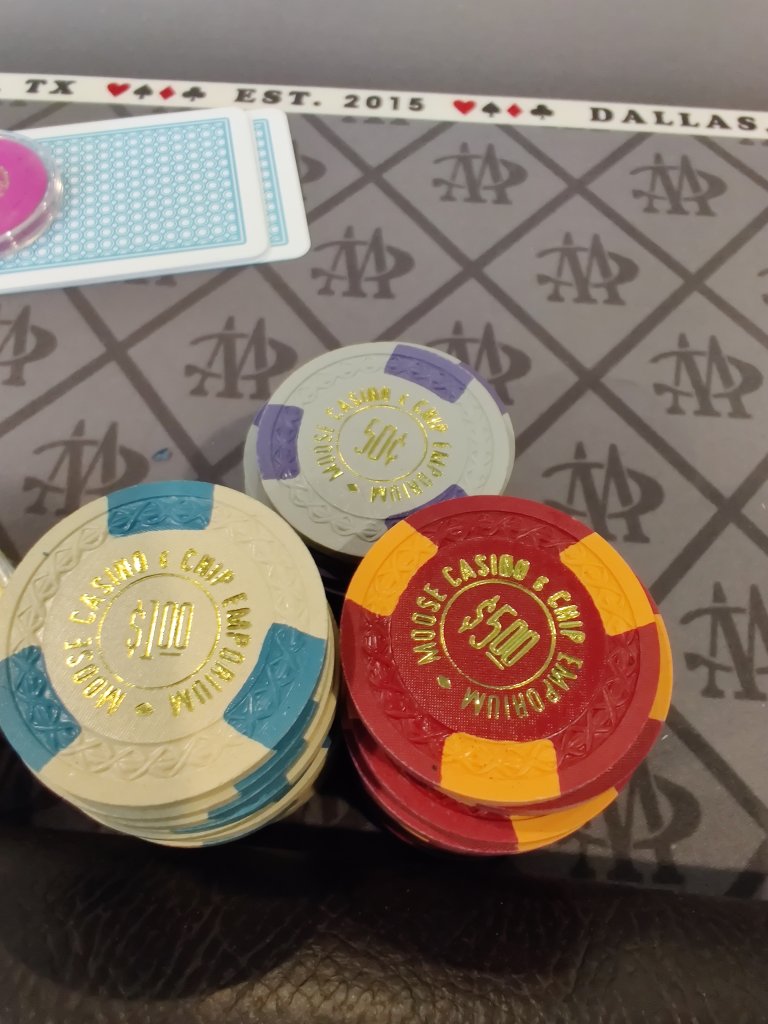 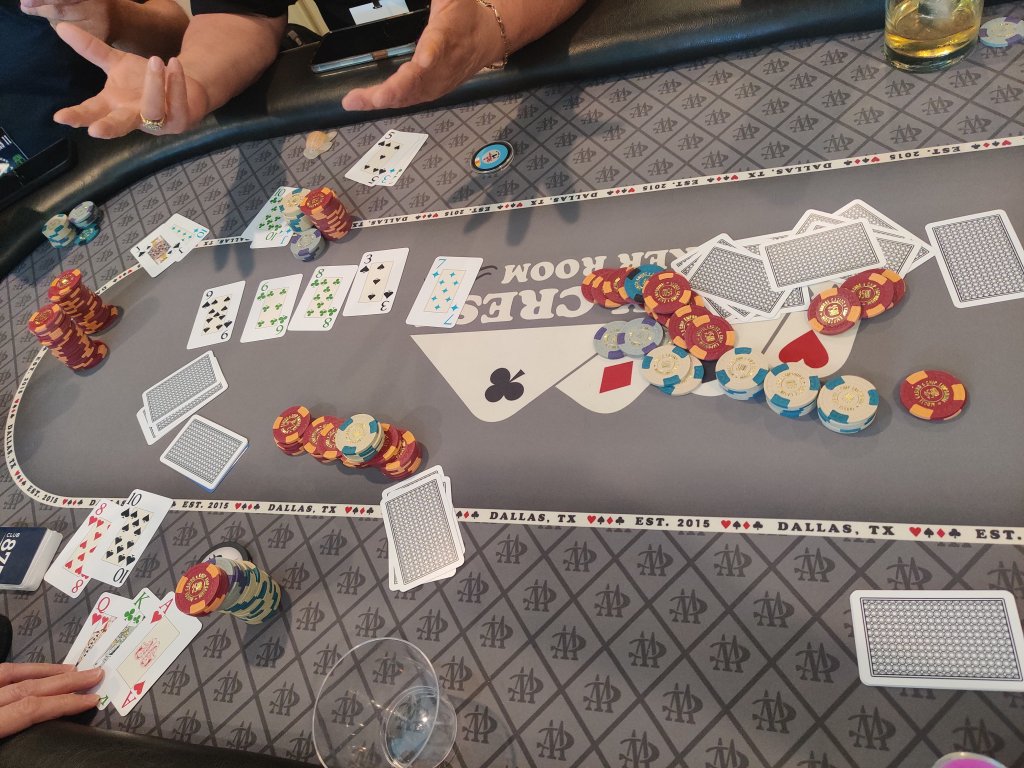 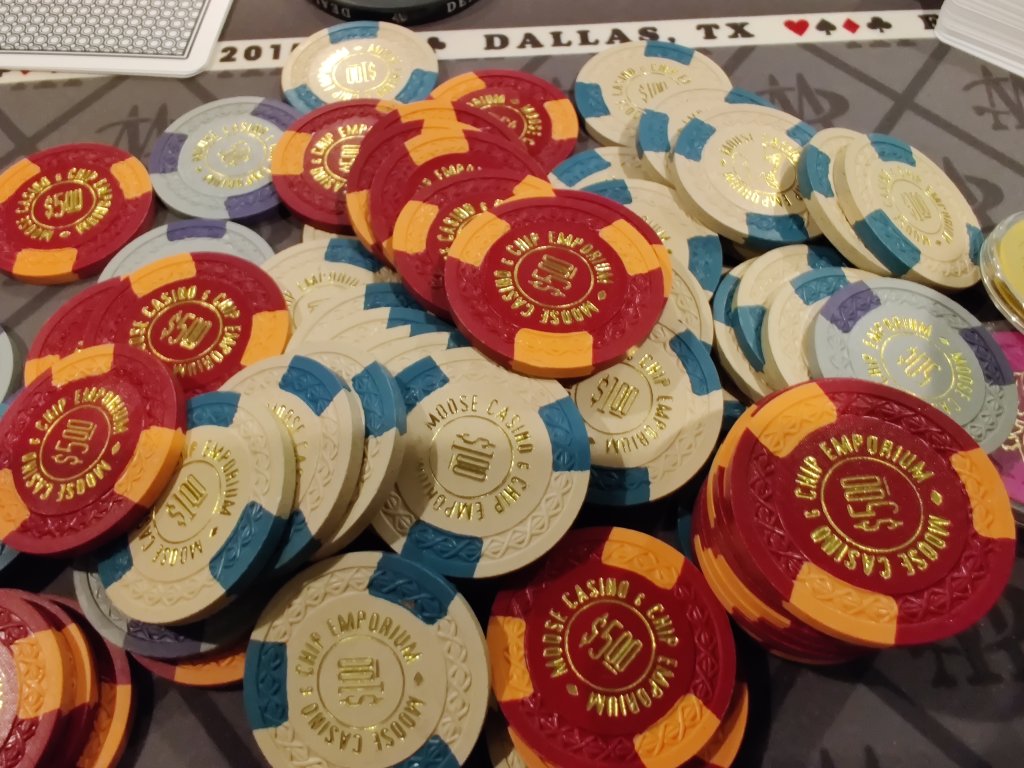 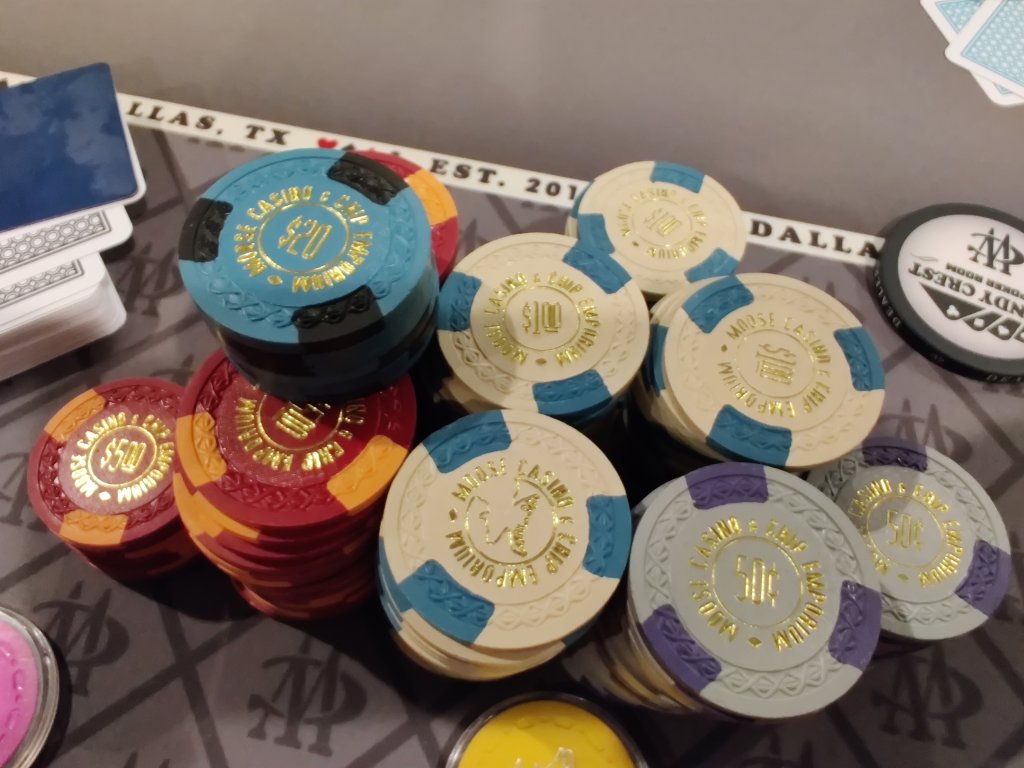 Holy sht, these are amazing!

I saw these in the DiD thread....by far the best looking set there! The fact that you custom hot stamped these only ups my impression!

I didn't get to play on the set, but these are beautiful chips

Congrats on sticking with this set, it turned out amazing!

Absolutely Beauties Mr. Rob and Mrs. Fran! Congratulations on booking a win for their first showing as well! I don't care what anyone says, there is a last impression and more love for a set when the madien voyage is a positive one!

Damn. There I was happy with my draft 3916/314/3TA316 hot stamp set and you deliver this batch of 312 hot stamp sexiness showing how incredible simplicity is.

Amazing to see a long project like this come to a close. Love the stamp

Unbelievably nice set. The definition of time and patience to assemble and execute it. 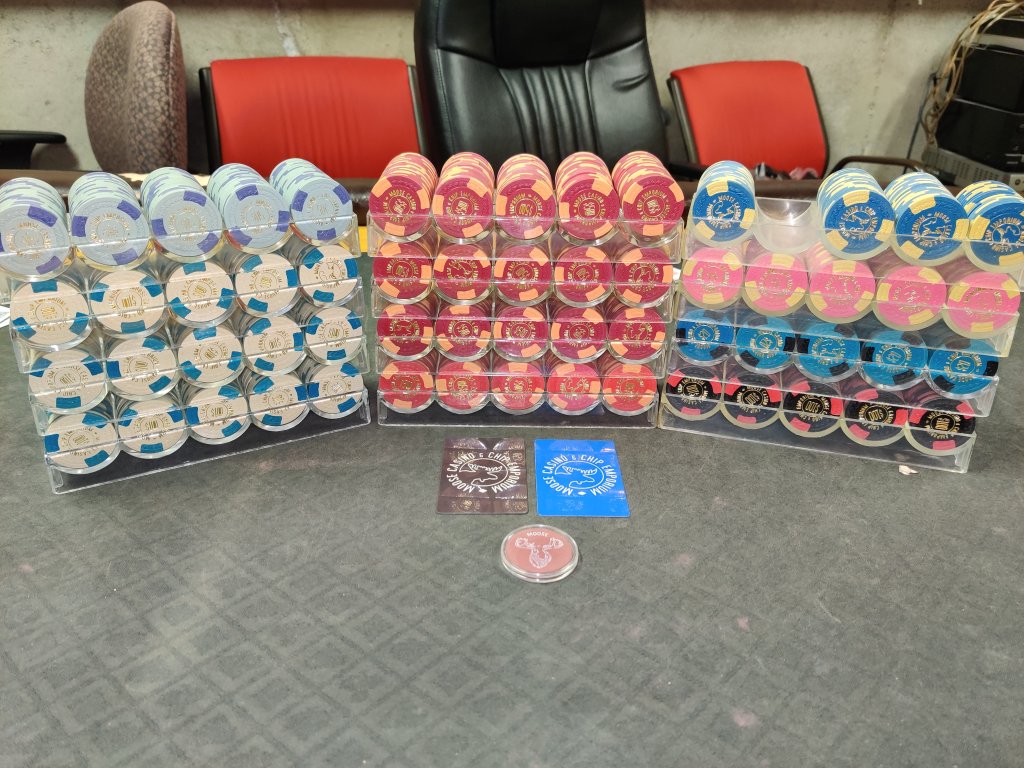 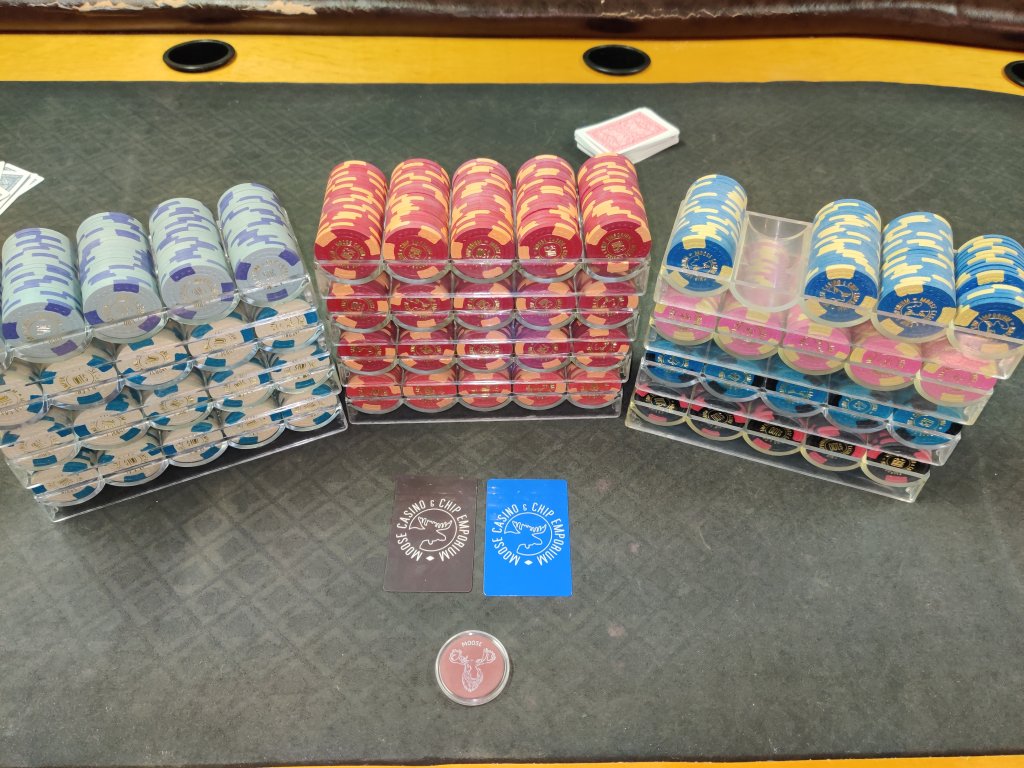 Ya ya, we get it. You have the best set on the planet

Moose and Mrs Moose, it was a pleasure meeting and playing with you both

I have one of your blue chips. Don't know if it was a pot splasher someone left or if you're missing one. Let me know.

CraigT78 said:
I have one of your blue chips. Don't know if it was a pot splasher someone left or if you're missing one. Let me know.
Click to expand...

CraigT78 said:
I have one of your blue chips. Don't know if it was a pot splasher someone left or if you're missing one. Let me know.
Click to expand...

It's a giveaway unless there is a denom on it.

Really nice chips - congrats to both of you 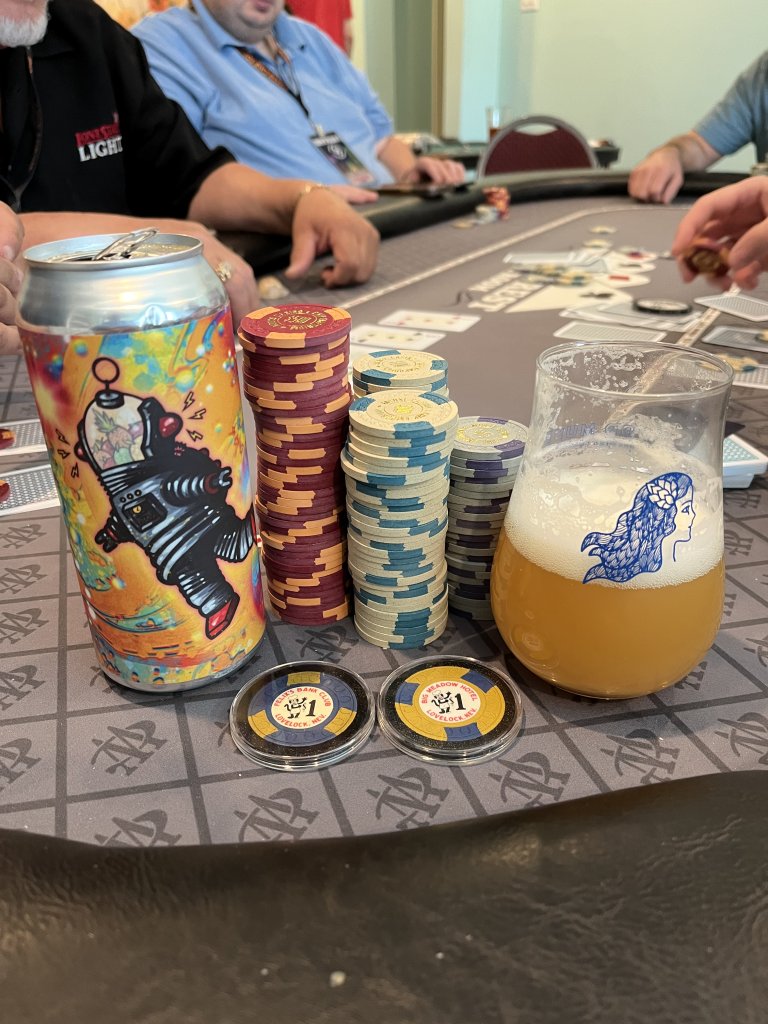 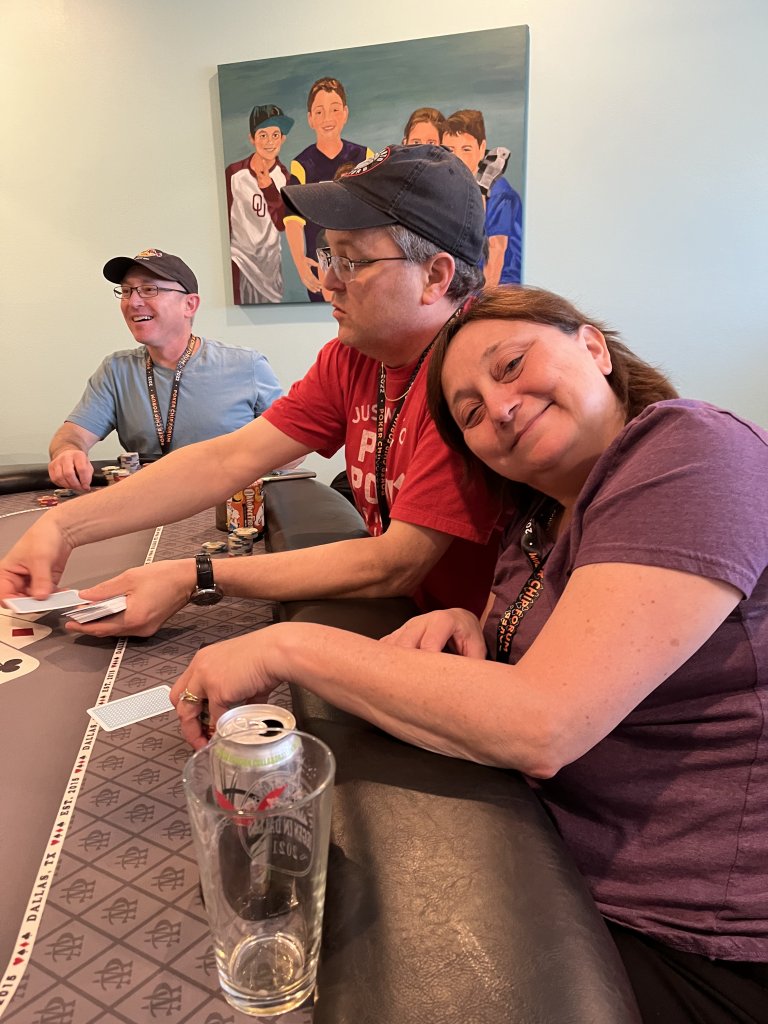 Dues are due the second Tuesday of each month.

Dude, these are pretty righteous. Sample sets available by chance?