I am sure that many of you already know the LVC was bought, but I was reading the Las Vegas Advisor and it sounds like they are closing it down very soon. I bolded the important line relevant to this group, THE CHIPS!!!

• August 18, 2015 10:00 Las Vegas Club Update: We mistakenly reported on Monday that Las Vegas Club had already closed, but it turns out it was just the table games that were taken out of commission on Sunday night; Wednesday at midnight is when the entire property closes its doors for good. Until then, you can still play one of their several hundred slot machines. Current CEO Jonathan Jossel told the R-J/s Howard Stutz that a lot of people are stopping by to buy up some of the soon-to-be-obsolete casino chips from the 86-year-old property (technically, that's a regulatory violation, but hey...) If you have some of those chips sitting in a drawer at home somewhere that you've been meaning to cash out, protocol dictates that there will be a redemption window, presumably utilizing the cage at former sister property the Plaza -- we'll pass on any relevant info when it's announced (which legally it is required to be in several area publications).

What new owner Derek Stevens has in mind for the old girl he's not revealing as yet, but he has said that a team of engineers will be sent in to appraise the building, after which he'll have a better idea of what's possible. It doesn't sound as if demolition is on the cards, however.


There are other posts about the LVC but the point is, if you want some chips and are in Vegas, you got until tomorrow to snap them up.

Would make nice relabeled quarters for the right RHC set..... 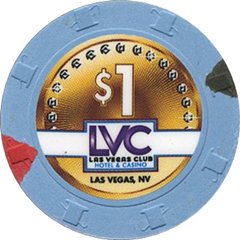 2014 issue.
You must log in or register to reply here.

Vendor Sale 148 Singles up for grabs. Sale 1 with focus on Las Vegas