These are printed on Fournier plastic stock, the same as Fournier's WPT and EPT playing cards.

The faces are standard Fournier, with some customization (card backs, jokers, ace of spades and box) by artist Sam Hayles of Dose Productions in Edinburgh, just up the road from me.

Pros of the Death Heads

Cons of the Death Heads

This review focuses mainly on the looks/artwork, as this is the deck's USP.

These cards are printed by Fournier and have the same faces and index as the Fournier No. 2800. I love the Fournier cards, so you can't really fault the Death Heads on that front. 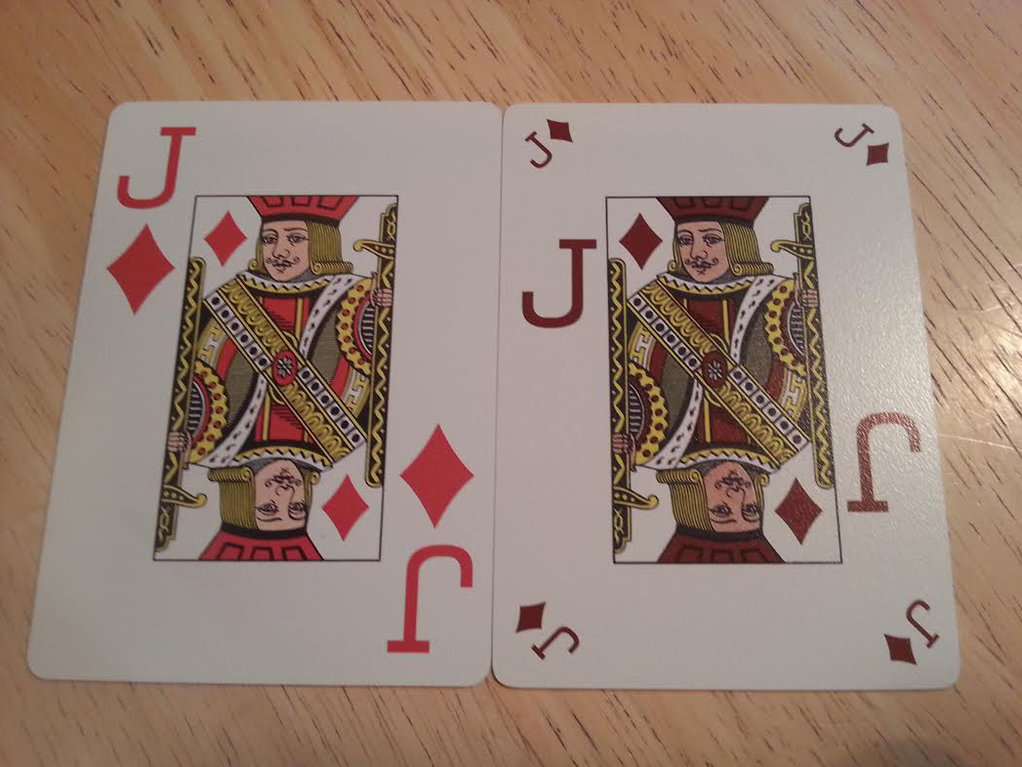 I could see no evidence of fading or errors. The print quality is consistent and excellent across the board.

It terms of customization/qualities unique to the Death Heads, the ace of spades has its own design: 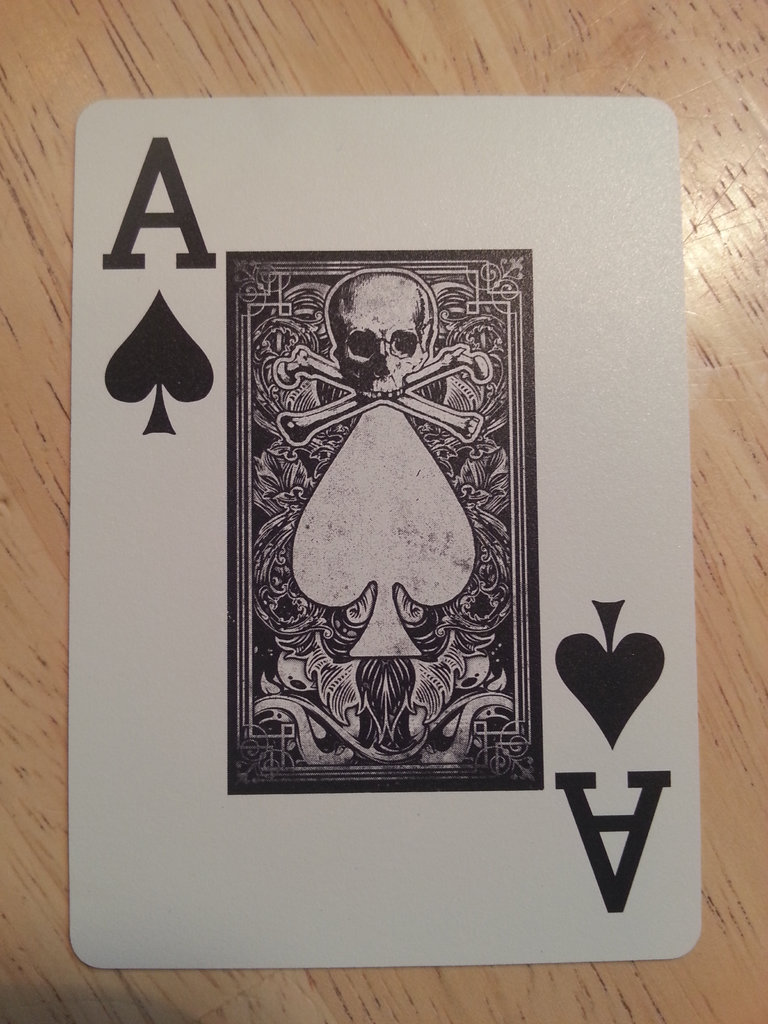 So does the joker, which is the same design for both of the jokers in the deck: 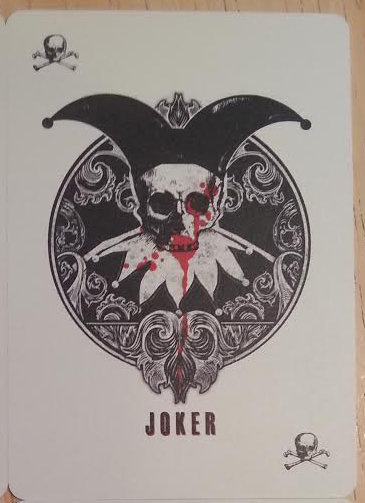 The card backs are also unique, featuring two skull and cross bones against a swirling paisley-esque background, with a sun-like motif in the center. The card backs have definite Hallowe'en appeal, for all you goths out there: 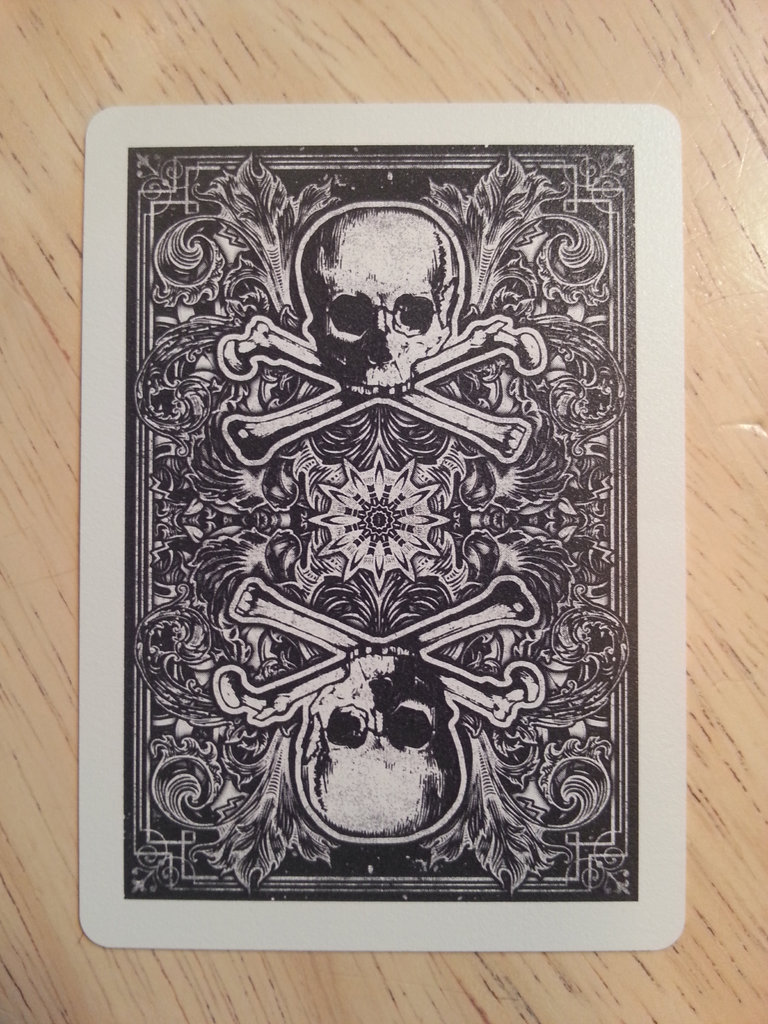 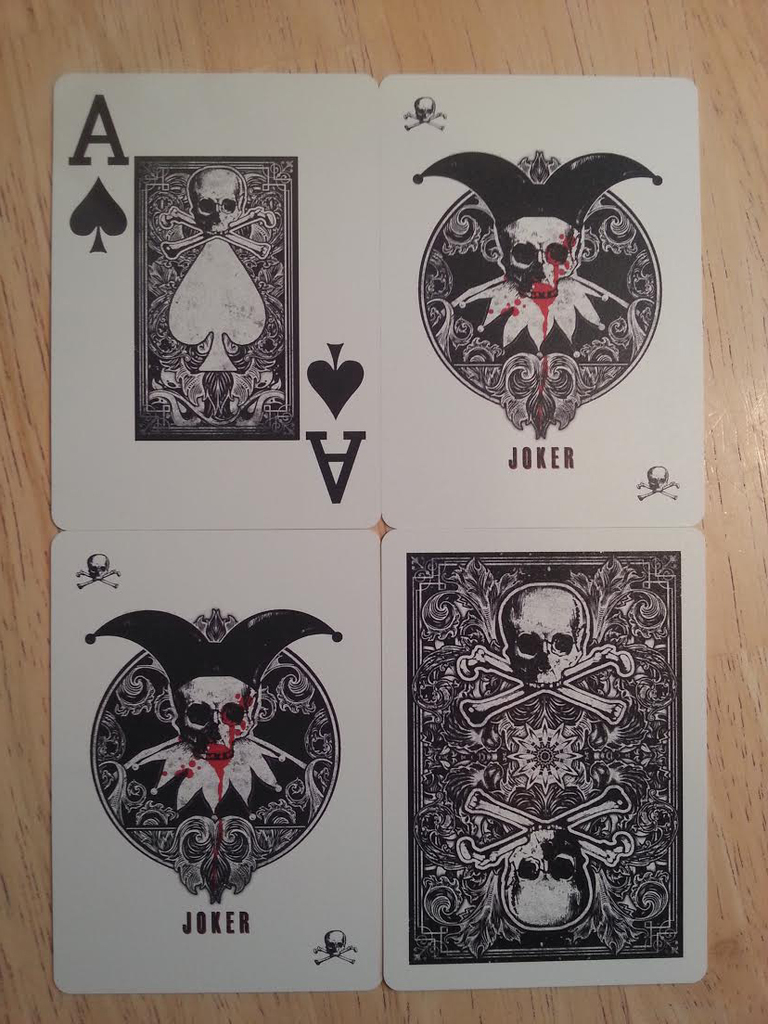 The lack of customization of faces is something of a disappointment. While the ace of spades is pretty nifty, it's out of step with the art style of the rest of the standard Fournier faces: 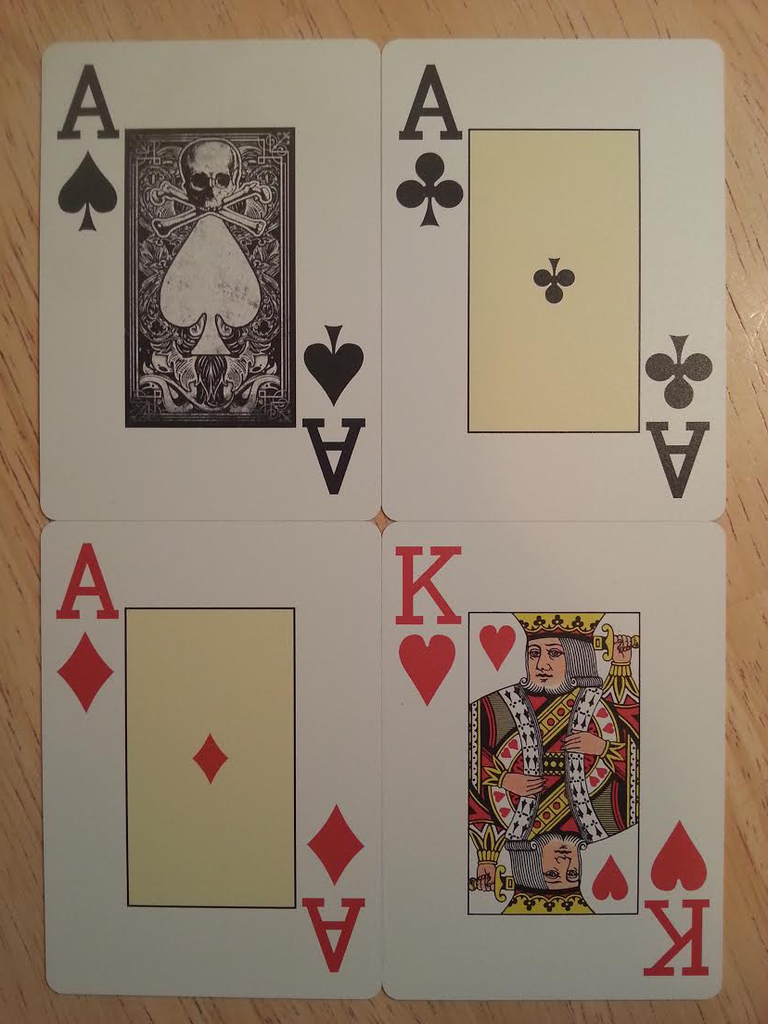 The ace, like the card backs, has a slightly soiled/dirty art style, which looks to be similar to the other Karnival cards. In the other decks it creates a unique and consistent look but with the Death Heads it is out of whack - all the other cards in the deck have either a cream background or, in the case of the face cards, the whitespace is clean and crisp. This makes the ace look out of place.

It's a shame that Karnival didn't customize more of the faces to create a more consistent look and feel. I'm guessing it was cost prohibitive doing this at Fournier, especially on a limited run of 3,000 decks. 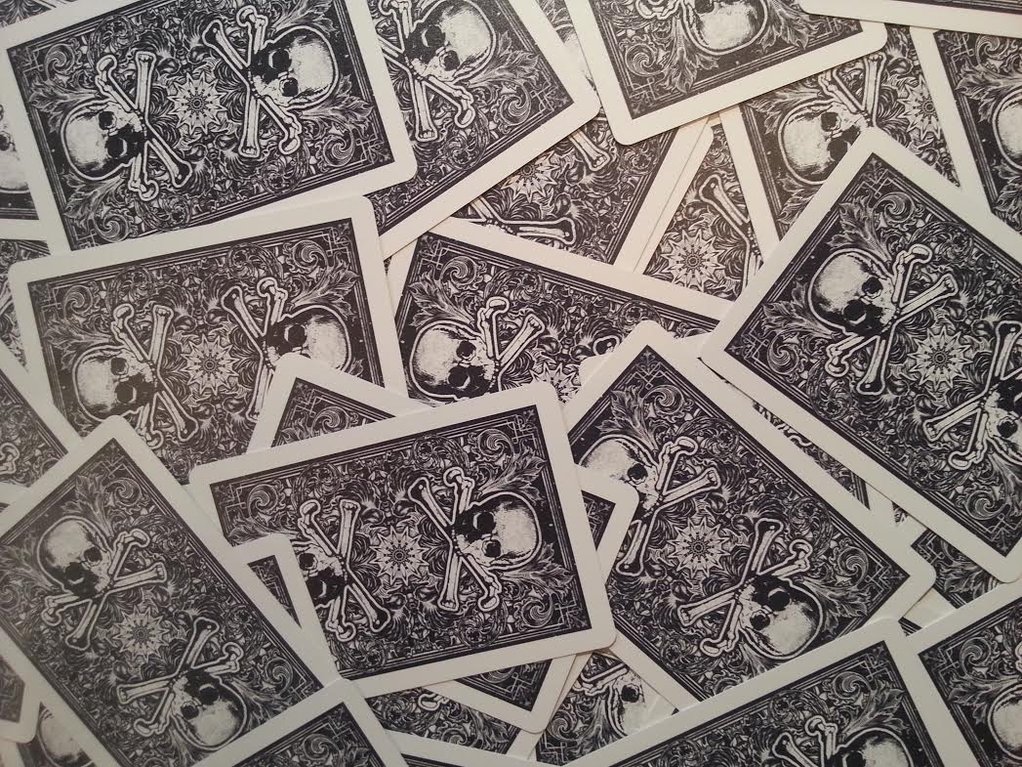 The cards are thinner than Dal Negro cards, feel medium firm but flex easily. The faces and backs are very slightly textured, which helps reduce slipperiness.

They shuffle and riffle nicely and are markedly less slippery than KEM or Copags.

With KEM or Copags, after shuffling/cutting a deck and placing it on the table I often find I need to tap the top of the deck to remove air from between the cards and to prevent the cards at the top of the decking from floating off (deck slide). I didn't have this problem with the Death Heads - the cards stay in place fine with no deck slide.

They glide across a neoprene table top nicely. I don't have any other table surfaces to test on but if you've used Fournier cards before you'll know what to expect with respect to SSC and other surfaces.

The purpose of the bend test is to see how the cards would hold up under use in a game. Specifically when players bend the cards up to see what hole cards they were dealt. I performed two tests for this on both decks.

The first test was to bend the cards to simulate checking hole cards. I bent the cards up to a 90 degree angle. The hole cards returned to normal (straight) with no noticeable bend in the cards?.

The second test was to bend the card end-to-end, so that they touch: 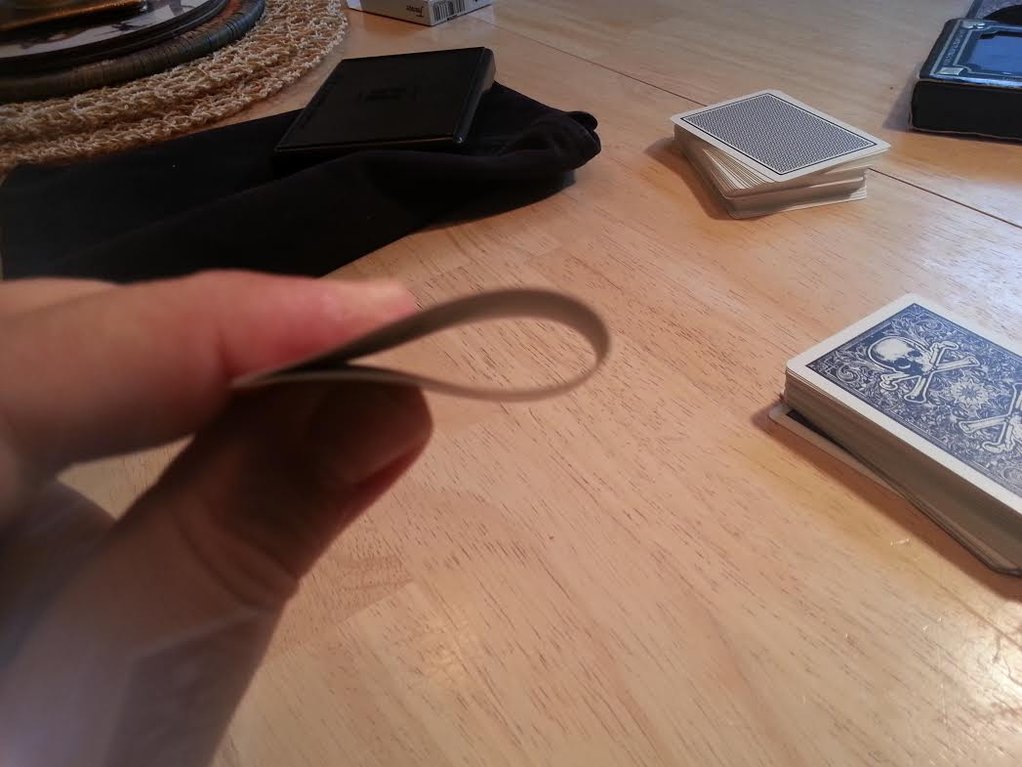 The card had a prominent bend after the test: 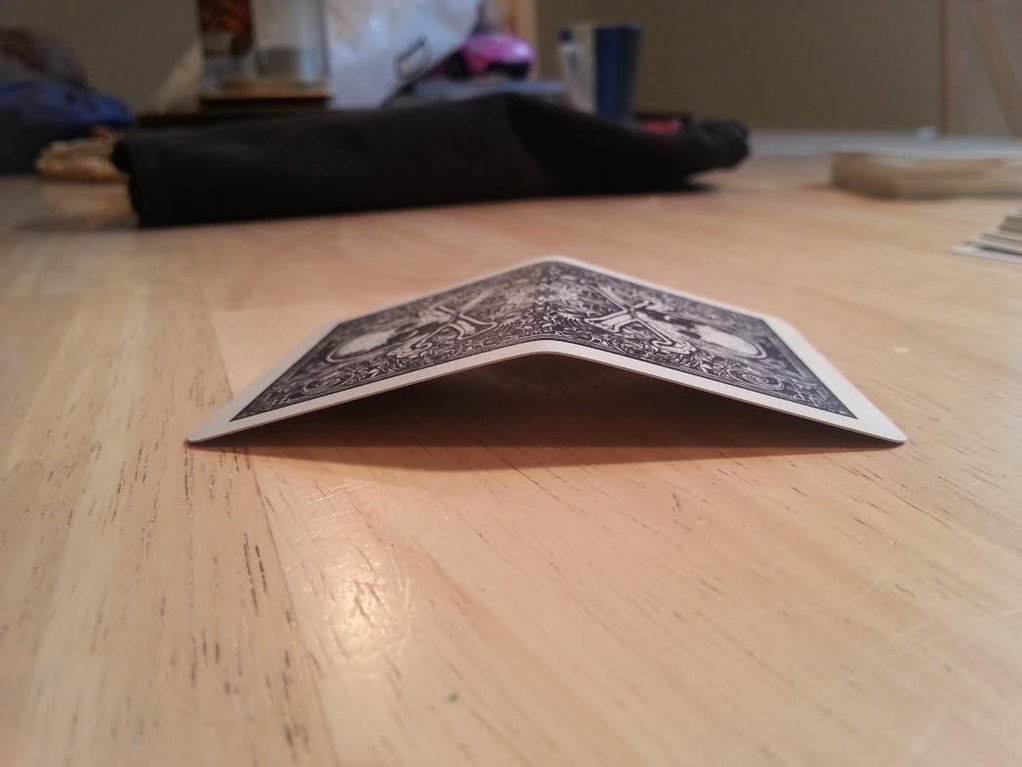 Reversing the direction of the test returned the card to normal flatness, with no noticeable marks: 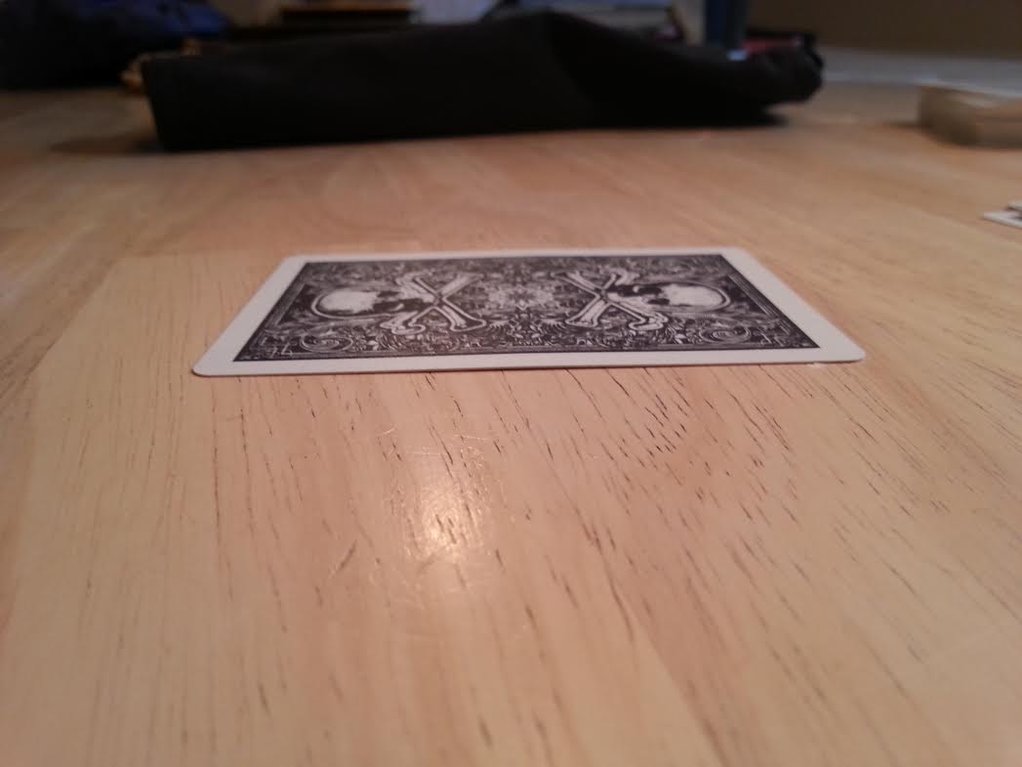 The Death Heads should stand up nicely in a home game situation, like other Fournier plastic cards.

If you like Fournier cards, you'll like these. The lack of colors means that trying to use these for more than one table is likely to cause confusion if cards hit the floor/get mixed up. The Sam Hayles art has a good horror feel, but falls short due to the lack of customization on other cards across the deck.

The box is awful - you'd best have a plan B for storing these as the supplied box will last approx 10 mins before it falls to pieces. This is a shame as it showcases the artwork but is unlikely to last unless you're really careful.

Ultimately, these are Fourniers so are very nice cards. If you're looking for a Hallowe'en novelty deck for fun or are planning a spooky themed game, you can't really go wrong with these. That's why I bought them and they meet the brief!

Before I had a chance to play with the kards, I took a walk around the village with the deck and took a few outdoor snaps for larks.

By the bonnie banks of the River Doom

What's the point in going on?

The decks are only available in the one version with the black, black, black backs, so a decent gimmick for a Hallowe'en themed single table game.

Aside from the card backs, only the jokers (same design for both in the deck) and the ace of spades are unique/kreepy.
Last edited: May 6, 2015

Good to see these were made in a plastic, non Bicycle version as well.

Nice photos, and nice pick up!

Give us a quick review when you can please

I may have to come back and learn to use the 'Thumbnail' option!
You must log in or register to reply here.

Z
How often do you break out a fresh deck of cards for your game?