A long time ago, I attended my first ever PinFest. 100's upon 100's of pinball machines ready to play. Some were themed after amazing movies, some after metal bands, and others around sports/cards/action. They spanned the decades from the early 20s without electricity to the modern age full of computers, LEDs, and advanced robotics. But the one that really caught my eye was Joker Poker. Here are a few stock images...


Built in 1978 by the historic Gottlieb company, this pinball machine had so many of the elements I love in a single game. The rules of the machine itself were easy to understand, yet hard to master. This made for a great novice play experience and a long-lasting replay-ability. And, of course, it was poker themed. One thing that set this machine apart from all the others is that Gottlieb decided to experiment with this game. Originally an electro-mechanical machine with no computers on board, they adapted it to their "System 1" computer and released a second version controlled by transistors and CPUs. For someone like me, seeing them transform a bucket of bolts into a vintage computer was amazing.

When my daughters were old enough, I took them to PinFest and to our local pinball museum. They, also, decided that this was one of the best games offered. They would focus on Joker Poker for hours, ignoring the bells and whistles of more modern machines around them. Finally, the time was right, and I was able to purchase my own Joker Poker. After months of rehabilitation, we had a working solid state JP in our very home.

One day, my oldest sat down next to me as I worked on my very first custom chip set (which is now on month 7 waiting to ship) and said, "wouldn't it be cool to make a Joker Poker themed set". It blew my mind - how awesome would that be! I decided it was a great way to introduce them into an area of this hobby that I had just discovered myself. So, we set on the path of deciding how to build a budget Joker Poker themed set. It needed to have a few requirements:
We spent a long time on this one. I drove the mouse, but they learned so much about Gimp and Inkscape. It was a great teaching experience. Originally, I had planned this to be on the cards mold chips, but when the Bud Jones R4s went on sale for $20 / rack, I couldn't pass that up. They cleaned up really nice and were very easy to murder. Best of all, the colors were a great match! Some mistakes were made along the way and I certainly learned a lot myself. But they couldn't care any less - they absolutely love this set. It's not mine - it's theirs. We put them on felt for the first time today and it was an absolute blast!

I present to PCF my Joker Poker chip set! 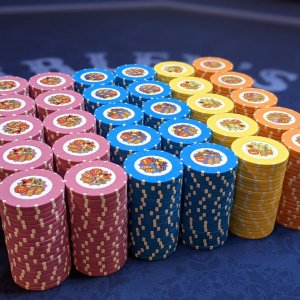 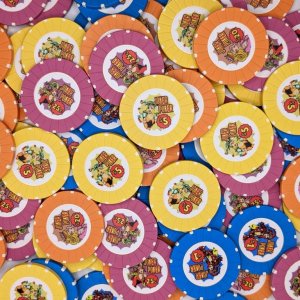 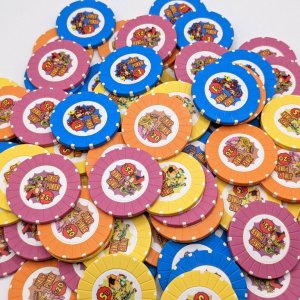 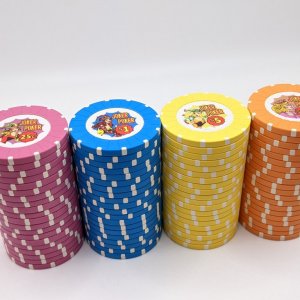 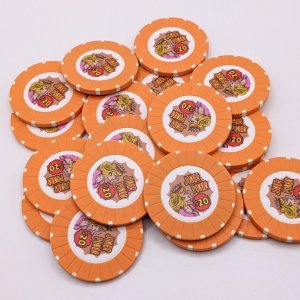 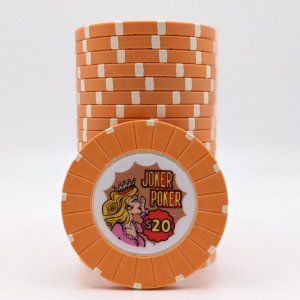 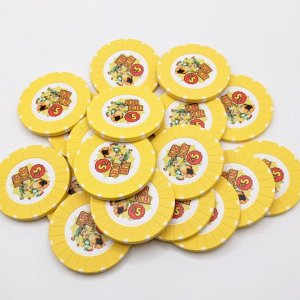 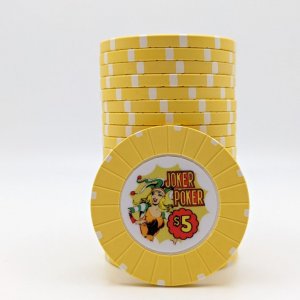 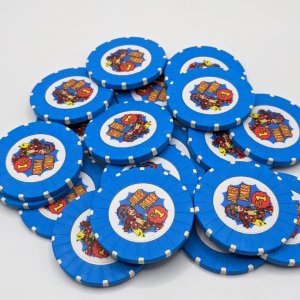 A custom set using Bud Jones R4 chips and Sticker Mule labels, this is based on the 1978 pinball...

Great job on the label design and awesome story!

(BTW with a few tweaks these would make an absolutely kick ass ceramic set one day.....)

(BTW with a few tweaks these would make an absolutely kick ass ceramic set one day.....)
Click to expand...

Thank you all so much! My girls got a real kick out of reading your positive feedback. It took a lot of trial and error to come up with the basic pattern. The biggest disagreement was over the colors. I was dead set on orange/blue/yellow/purple, but they were adamant that we used the colors above.

We kept voting and it kept coming back 2-to-1. I called shenanigans, they rolled their eyes, and we would adjourn to different parts of the house and not speak for days.

I love everything about this.

Beautiful and a super cool idea. I love pinball
P

Very clean design and super cool. Sometimes less is more.
You must log in or register to reply here.