is a Royal Flush a hand ranking?

I think that Royal Flush is only included at the top of hand rankings chart, simply because it is the very best possible hand.

That qualifier doesn't apply to quad aces, aces full of kings, an ace-high flush, a royal straight, or trip aces.

But it's just a straght flush, in terms of grouping.

Needs to be quad aces king kicker and trip aces with king, queen kicker. Only the best possible hands!

How about, "Super Up Town Pop n Lock"?

dkersey said:
When looking to print some cheat sheets for novices at my games of hand rankings, it seems that 95% of them have the rank of 'Royal Flush' as the highest rank above the straight flush. To me, a Royal Flush is the highest possible straight flush, and therefore it is not a different ranking. Every rank has its high possible combination, and the straight flush one just has a catchy name, so why is it listed on most of the cards as its own rank?

Gee, I hope this doesn't cause major controversy like the Hot Dog / Sandwich debate...
Click to expand...

I agree to a certain extent. A royal flush is just a higher degree of a straight flush. But, it still doesn't happen that often and is the highest hand you can get in poker. I don't think recognizing it as its own is a bad thing. It gives you something to look forward to if you ever hit it.

Put me into the "its just the highest straight flush" category. No reason to break it out.

Who other than newbies consults lists of hand rankings? A Royal Flush is pretty and seeing it on the list probably appeals to beginners. Showing it separately adds no information but does no harm.

(obviously we are talking about games where a joker can be used as an ace)
Click to expand...

Your decks don't have an Ace of Purple Horseshoes?

buzzmonkey said:
Your decks don't have an Ace of Purple Horseshoes?
Click to expand...

Have to ask @desjgn about that .

But any straight flush without using a joker card beats 5 aces
At any rate, I 've struggled to leave that shit behind me, and I 'm very happy playing just NLHE.

FDLmold said:
I played recently and had a “29”.

Coyote said:
But any straight flush without using a joker card beats 5 aces
At any rate, I 've struggled to leave that shit behind me, and I 'm very happy playing just NLHE.
Click to expand...

There is only one way to make 5 aces but four to make a royal straight flush.

BGinGA said:
I think that Royal Flush is only included at the top of hand rankings chart, simply because it is the very best possible hand.
Click to expand...

Sorry to revive this but I had the same thought as this thread and accidentally started a duplicate, merging it here

I think the Royal Flush is included at the top so the Playing Card Mafia can make their godforsaken hand rankings charts symmetrical. Piss poor excuse for corrupting the minds of budding poker players, ya ask me.

It's the same damn hand! 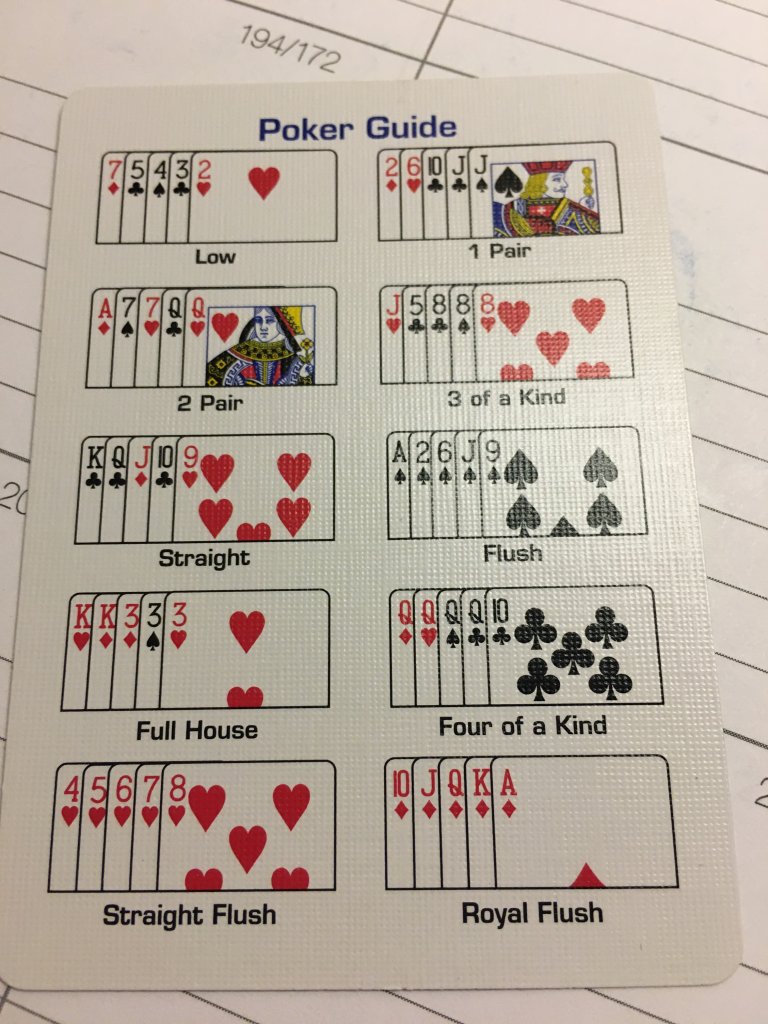 (obviously we are talking about games where a joker can be used as an ace)
Click to expand...

Several years ago I was playing for the second or third time in a new-to-me home game. I should have been on alert already, because this was a game where 1bb is always the minimum legal raise. Post-tourney cash game started, dealer's choice. One hand per game and wild card games were allowed. Eh, okay, whatever, it's .25/.50 and most of us are buying in for $20 so I'm not going to sweat it.

We got into a game of five-card draw with wild cards, and I improved three aces to five of a kind. Host and I both had bigger than starting stacks, and it all went in the middle. I showed my five aces, he showed me a royal, and I started to scoop.

I was salty, left shortly afterward and didn't go back for a while. Went once more several months later (after the game had gone on a long hiatus), it wasn't that good, and AFAIK it never ran again after that.

Schmendr1ck said:
"Yeah I guess so, but house rules here are that a royal always wins."
And he scoops the pot.
Click to expand...

...that's a murder on my block

RudysNYC said:
...that's a murder on my block
Click to expand...

I wasn't specific about why the game never ran again after I returned... 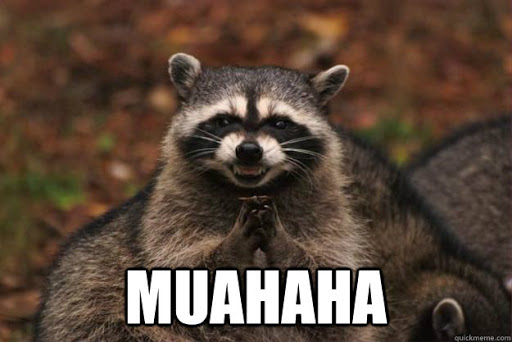 Gobbs said:
Look at it this way...

a perfect game no one reached base by any means

a no hitter a pitcher can walk batters, give up a runner to an error, even give up runs

Gobbs said:
Look at it this way...

This was the closest I've come to being converted lol. I think you're mostly on the money with all of this, and I'm totally cool with the idea of people calling it a royal flush and whatnot I just think it's philosophically misleading to call it it's own "ranking." There's a substantive difference between a perfect game and no-hitter, in that a perfect game is 27 up/27 down while a no-hitter is just that, 0 hits on the board. There's no such thing as a "more perfect" perfect game--it's a binary, either you pitched a perfect game or you didn't pitch a perfect game.

With hand rankings though, that gets a lot more screwy in my head. For example, a 4-8 straight flush is just as much of a straight flush as a 2-6 straight flush, but because of how poker works, we recognize that the 4-8 SF beats the 2-6 SF. The way I see it all, a "royal flush" is the same as a "Broadway" straight. Broadway is the best possible straight one can make, but nobody would call it its own ranking because it's ultimately just a straight. I've heard an argument that RF deserves a separate hand because it's so statistically improbable, but again, the odds of a royal flush are the same as any particular straight flush in the deck--meaning, your T-A SF is as likely as a 2-6 SF.

I will die on the hill that the "royal flush as a separate ranking" only exists because the Playing Card Mafia decided they needed an even number of hands in their handranking charts.
A

A Royal Flush is definitely its own hand ranking. Considering people may never even make one in their lifetime, there must be a distinction for the absolute best. Also, with a flush and a straight flush being of different ranks, an Ace high flush is still a nut flush even if there is a straight flush possible.

RowlettTexasChipGuy said:
that is not right a perfect game a no hitter are completely different

a perfect game no one reached base by any means

a no hitter a pitcher can walk batters, give up a runner to an error, even give up runs
Click to expand...

RudysNYC said:
There's no such thing as a "more perfect" perfect game--it's a binary, either you pitched a perfect game or you didn't pitch a perfect game.
Click to expand...

I know this is not your point, and it is off topic, but I have a philosophical question for you to which I'm not sure I have formulated my opinion...

Strangely, my answer seems to be different for the two questions...which is why I don't like my own opinions on it and why it has me questioning my opinion on the card rankings.

Gobbs said:
Much like a perfect game is so special that people consider it something different than a no-hitter
Click to expand...

A perfect game is only completed once all batters have been faced and retired in order, so while I think an extra inning of perfect pitching is surely more impressive than even a 9-inning perfect game I don't think it's "more perfect."

Similarly, limiting the possibilities to a 27-out game, there are still multiple ways to throw a no-hitter (facing 28 batters, 29 batters, etc.), yet only one way to throw a perfect game (facing 27 batters). So, now I'm even more comfortable with the analogy and royal flush having it's own category.

Okay so our frameworks are a little different, I see a straight flush as a perfect game across the board. A straight flush cannot lose to anything other than a higher straight flush, which is when the high card comes in like in every other ranking in poker. Add in the fact that the probabilities of any straight flush are the same as the probability of a royal flush, and I can't in good faith call them different outright rankings. It's a nickname!


Gobbs said:
Similarly, limiting the possibilities to a 27-out game, there are still multiple ways to throw a no-hitter (facing 28 batters, 29 batters, etc.), yet only one way to throw a perfect game (facing 27 batters). So, now I'm even more comfortable with the analogy and royal flush having it's own category.
Click to expand...

You can also face 27 batters and pitch a non-perfect no-hitter, though.

Plus, to go to the heart of the analogy, I think it's illustrative to a point but flawed when you start looking past the big picture into the details. One reason people make a distinction between a perfect game and no hitters is because they're achievements that are earned through stellar play. There's work that goes into it--from the pitcher obviously, but also his fielders and the batters (their work, obviously, having failed). It's something that receives influence across the board--a perfect game is by no means luck, it's a confluence of factors that many individuals can influence at any given point. The distribution of cards, though, is entirely chance. We as poker players do nothing to influence the cards themselves, we can only hope to influence each other and our decisions.

Again, let's be clear... I'm cool calling it a royal flush, since poker hands have lots of nicknames, I just can't bring myself to consider a royal flush a separate ranking from a straight flush. "Royal flush" should be considered more akin to "wheel" in peoples' minds than "four of a kind," I guess--nickname not ranking lol
You must log in or register to reply here.

Tourney Have to submit rules to the Gaming Commission ... need opinions
2

How to host a home tournament.
2