Tourney Inside the Zombie's Brain (1 Viewer)

There were some requests on another thread for more of my newsletters, so I thought I would open up this thread. Obviously, a lot of the stuff that is related directly to the club won't mean diddly-squat to most of you, so read it, don't, whatever. Postin's free.

I will preface this first newsletter. I will say right up front, in normal circumstances, I am all for random seating.

But I'm not normal.

Our group is comprised of extremely social players, and a dozen or so good ones. When I formed my first poker group (during the biggest part of the poker boom) I cleaned up - and I wasn't very good. I just understood that you don't always have to see a flop, while most everyone I was introducing to live poker was freerolling on Party Poker, P*s, and wherever else a free hand was being dealt. I rapidly got a reputation of being a shark and the game died. Completely. To this day, I cannot get another firefighter in my entire department to play cards because that word traveled fast.

I understand that poker has it's shady side, but I'd like to break through that barrier. To do this, I created the most unusual seating system known to mankind. It sets most of the inexperienced players at what has been dubbed the "kids table", while the majority of the good players are seated at the "big table". Placement is still random, but there are weighting factors that influence which table you will end up at. Also, other than the player seated at seat 1 of each table, all seats at the table are assigned randomly. Your placement relative to another player is still as random as anywhere. This system allows the more social player to survive longer than they might at a table full of sharks, and this system has prevented a loss in all but a few players over the years. I have hard stats that show that even good players starting at the Kids table in 2 or 3 table events don't have a better chance of winning compared to their results at the big table.

Since there is no advantage or disadvantage from this system, I have no intent of changing it. You probably don't want to do this yourself, unless you have the same demographic as I do, and even then you don't have my formulary that has been carefully refined over the years. If you choose to adopt it, let me know and I can help you out with my anti-collusion formula, my player strength formula, my OtM1P%, and the other (and this is no exaggeration) 10 spreadsheets, the biggest of which is currently 534 rows and 46 columns.

With that in mind, I present to you the first issue (at the time I had no idea there would be more) of Inside the Zombie's Brain.

Thx for doing this. Its getting to be a full service forum now

Sweet. Now I wanna see the last couple that I missed.

Soooooo, I hate to look like a n00b or anything, but WTF is an OtM1P?

Nice newsletter! Hope to see more in the future.

OtM1P% is a calculation of how frequently a player finished Outside the Money, while starting at the table the 1st Place finisher started at. This number is used to compare the number of times a player has finished in the money with their "partner" (spouse, invited friend, etc.). If there is a statistically notable difference, those players will be separated and start at separate tables. It also sets up a red flag for us to be on the lookout for collusion if both players make the final table.

It was phrased in the newsletter in a much more friendly (and non-accusatory) way.

PZ,if you ever have Ben attend one of your games why do I picture it going something like this... 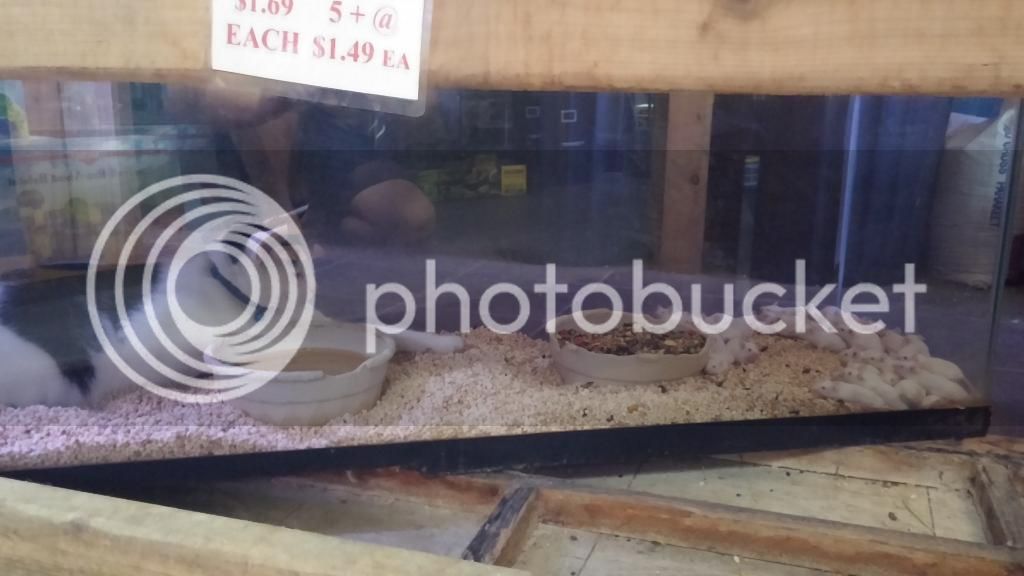 ...and the height difference is about right too.

I disagree. I would prefer a more pure, random seating for the entire tourney. Just me though.

Would it stop me from playing in your game. Nope, it sounds like everyone knows up front how the seating works.

I like the idea of completely random seating, but as a host, it hasn't proven to be that practical for me. We used to do completely random seating, but our table arrangements almost require dedicated dealers. Since our dealers play, and not everyone is actually good at dealing, I would sometimes wind up with all the dealers at the same table, or in seats that didn't lend themselves to being the dealer. So I moved to a 2-dealer per table system. Those selected as dealers (usually 6), randomly draw for table and 1st dealer position. The 2nd at each table sits opposite. Then players draw randomly for the seats around the dealers.

We've informally adopted a system of not moving the dealers until a table breaks down. That helps maintain order at the table and keeps the game moving, though sometimes someone else will have to take over when a dealer is KO'd.

When we get to the final table, the two qualified dealers with the highest chip counts, assuming they are still willing to deal, draw for the 2 dealer spots. The others then randomly draw for the places around them.

It's still fairly random, but some would prefer it to be even more random. I've talked to them and explained the issue, and those who have brought it up are not dealers, but quickly see the reason for doing it that way and don't want the dealer responsibility. They also agree we have some people who would be horrible dealers and they wouldn't want to get stuck with them.

Unlike Zombie, I don't have a playing spouse, so I can't put hosts at more than one table, and I don't dare suggest cutting me in half lest someone take me up on it! Sometimes I wind up with a table that has two dealers who, while good at dealing, aren't particularly strong on our rules. While we have a TD for issues, sometimes they just make a decision, although it's a wrong decision, and move on and they never ask the TD.

Bottom line is I think random seating sounds best, but it isn't always practical. Since it isn't, notice to everyone is second best.
O

Here's issue #2. It's one of those issues that will mean very little to those outside of the club, but if I skipped it, someone would invariably ask "where's issue 2". The point system is still basically the same system I currently use, and has popped up in more than one thread discussing league point systems. The unusual stats in the first article points out how green our group was in 2009. The play has improved, but most of the players are still mostly social players, creating an interesting minefield of 4-outers for skillful players to navigate.

You may notice it appears faded. This is because it is a scanned image from a previously printed newsletter. You will find out why in issue #3.

I forgot I started this thread I'm bumping it myself, just so I remember to add the next issue.

Looking forward to more of these.

Finally, Issue #3. It explains why Issue #2 is a scanned image rather than a regular .pdf (converted to .jpg for posting here). Probably not a helpful issue for your home games unless you are as clumsy as I tend to be around expensive equipment, or you are looking for an interesting bonus for the night. 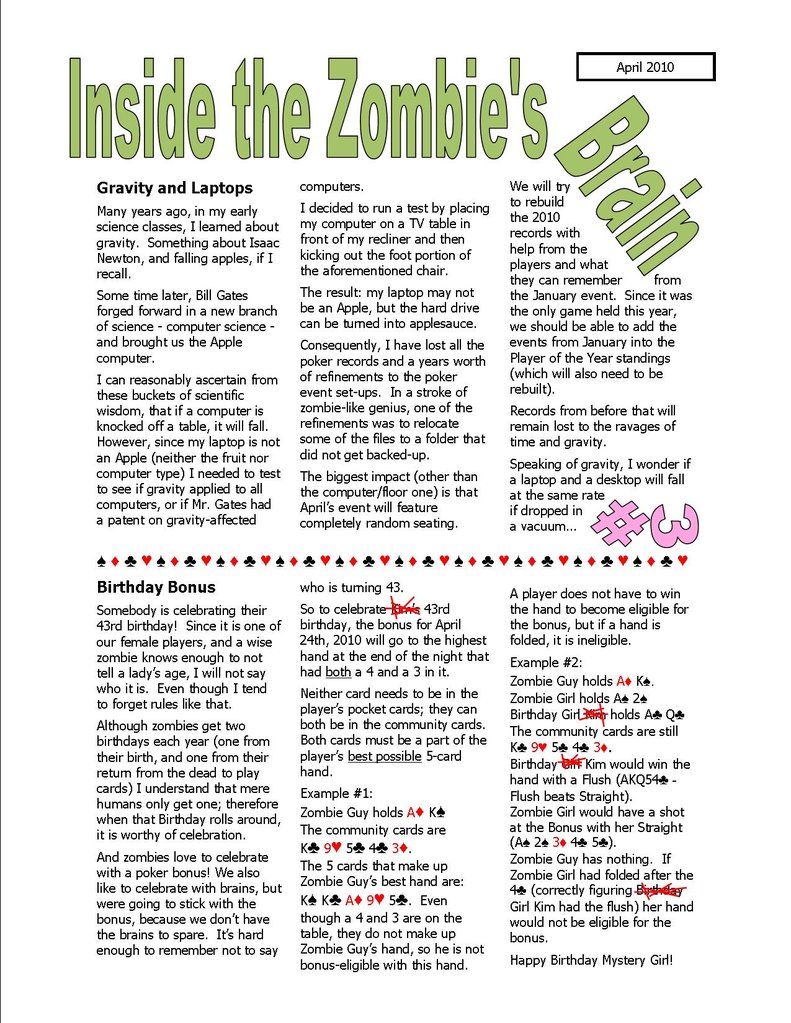 Issue #4. Now we discuss bonuses - those little freebies that (usually) equate to 1/2 a buy-in. Seriously, If you are losing social players, and those social players are still buying scratch-off lottery tickets, you are doing something wrong. Give them a "win". 1/2 a buy in won't affect your prize pool too much (unless your game is no bigger than a head's up tournament), but it will go for miles on giving your event color, and randomly awarding someone that may lack ninja-poker skills.

And that just may save a struggling social game. 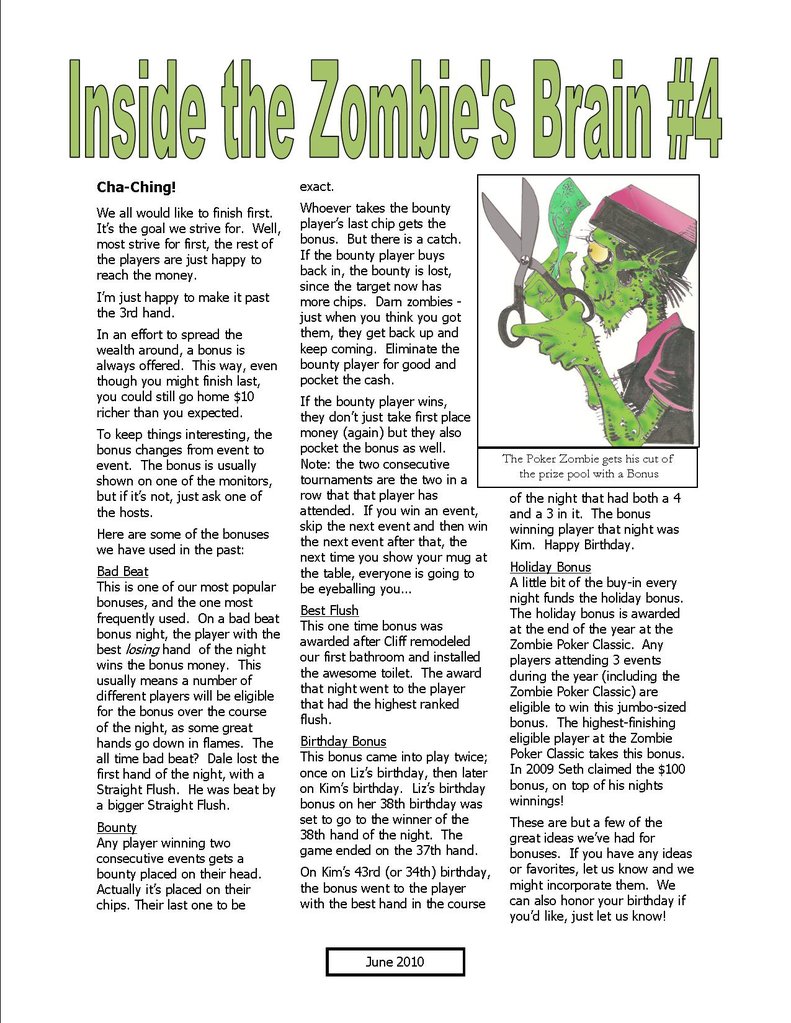 Sunday at 9:10 AM
SaucyAussie
S