Tourney How To Move Players -- Keeping Tables Balanced in a Tournament. (1 Viewer)

For anyone new to all this fun -- it might be you find yourself with 3 or more tables and that requires you to come up with a system whereby you can keep tables balanced and how to move players around.

Honestly, I'd strongly suggest not playing yourself. To run a quality tournament of 3 tables & above, IMO, is pretty much impossible to as both a player & director. It can be done, but it's not much fun for the director and can be frustrating for the players as the clock is typically paused again and again while decisions, moves, & tables are broken down.

With respect to moving players, I use this simple method stolen from homepokertournament.com (I think).

On a separate folding table or whatever, you would have the EMPTY seat cards laid out by table.

As players go out, you MUST gather their seat card (or the system fails) and place it under the proper table -- here I show Table 1 lost seat 9, Table 2, seats 1&5, Table 3 lost seat 8 and Tables 4/5 started out that way. At this point the tables are still within balance -- they only differ by 1 player or less. 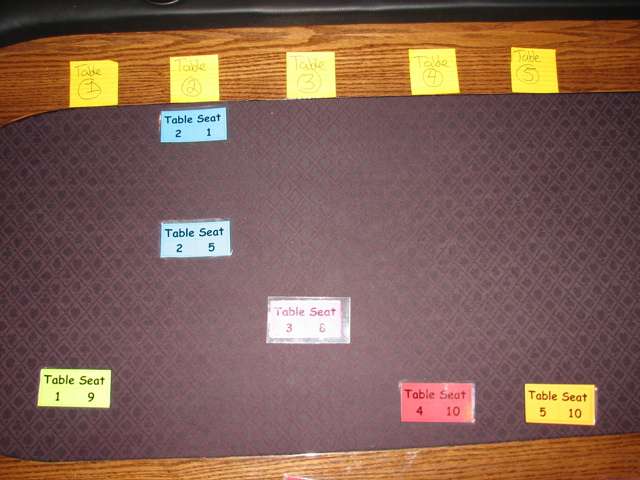 If you get to the point where there is a difference of two (or more) between any tables, such as below you see you must move somebody from a table with more players: Here I show Table 2 has lost seat 7, so now table 2 has only 7 players compared to the other tables with 9. A difference of 2 players = bad. Find out what position relative to the button that last player was to go out on table 2, seat 7. If they were two behind the button, then you pick up that seat card (T2/S7), take it over to table 5, find the player sitting in that same relative position of two behind the button, give them their new seat card & have them move over to table 2 -- be sure to pick up his/her seat card from table 5 because now they are gone. 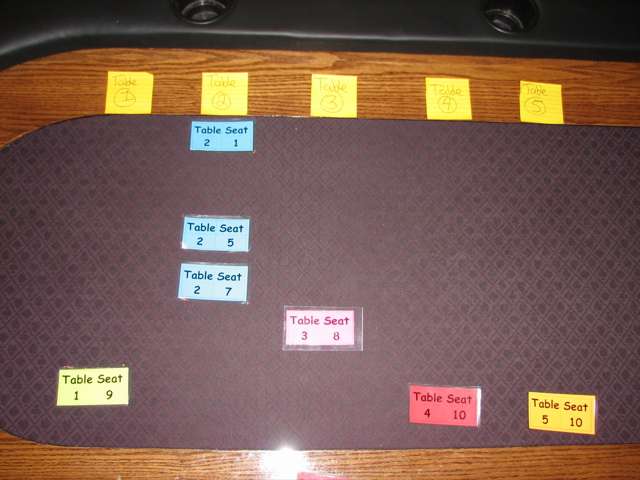 Now comes the REALLY fun part -- breaking down tables. Assuming you can fit 10 people at a table... This took me a few times through in my head before it became second nature, but if you look below you'll see that table 5 (the one I want to break down first) has 8 players remaining AND there are a total of 8 empty seats when looking at tables 1-4. In other words I can now take those 8 players from table 5, & place them at the other tables, & get rid of that table. Of course the hard part is trying your best to place them in their same relative position to the button which 9 times of out 10 you can't for everyone. There are times when someone has to pay a blind sooner than they would have at the other table, but that's life. This must be explained ahead of time to avoid the argument. Anyway, you'd give those players on table 5 seat cards from the open spots on the other tables, take back their table 5 seat cards and do the whole thing over again. I could write a bunch more about all the other possible things that might/could/will happen but I already feel like I've written way too much. I do admit to writing out posts like this with those folks in mind that are new to all this and need more of a step-by-step deal. The vets are probably rolling their eyes, but hey, I remember when I first started and how lost I was. Hey, if I help one person, then cool!

That's actually a pretty good method! One of the problems it might have (which comes to mind right now anyway) is that there's a possibility that the little cards with the table and seat number can get lost and thus the whole system basically fails.

sagits said:
That's actually a pretty good method! One of the problems it might have (which comes to mind right now anyway) is that there's a possibility that the little cards with the table and seat number can get lost and thus the whole system basically fails.
Click to expand...

EXACTLY & this very thing happened the first couple years until I got smart/tough! Thus the note about how the dealers MUST alert the director (me) when people go out. I actually announce this at the beginning and it's amazing how many times players alert me as dealers just get busy with the game (totally understandable).

Also, I've now laminated EVERY seat card with a super heavy-duty laminate that has very sharp corners so nobody holds them, or sticks them in their pocket -- in fact I CONSTANTLY announce over the P.A. that seat cards are to be held by the dealer. Takes a bit of effort but it works great.
N

Solid advice UW85, it might seem pedantic to a few people but ultimately the whole tournament falls apart very quickly if its not well-structured. Definitely agree with not playing in your own tournament as well, that was a mistake I only needed to make once!

The guy who runs the league play in has a software program he uses as a tournament clock that also pick out who is moving when it's time for a table change. Pretty slick. Not sure of the name of the program though.
You must log in or register to reply here.

Tourney How many tables with this set up