How many rooms have you played in? (1 Viewer)

I travel a lot for work and have been lucky to have some downtime and played in several rooms the last few years. I bounce a lot for work between home (RTP), Arizona, California, and the Northeast so this is predominantly where I’ve played.

Would love to hit up the Mississippi rooms at some point. What can people recommend for Northern California rooms? I’m in SoCal a lot and can take a quick 45 min flight on a weekend to be in the SF area.

My room list (working East to West; sadly there are really no rooms close to home for me. Harrah’s Cherokee is about a 3 hour drive and it’s just not a place you can go without staying overnight).

You can take the poll.
Interesting that you picked the exact same title for your thread

I don’t think I could come up with the list, but it would have to include casinos not just card rooms. Mainly because I don’t remember half the names of the random locations I would drive to just to step foot in a casino. If I had to guess over 30


I have a spreadsheet

It was too big for one post......
But, like I said in the OP, many of these were for short sessions of just an hour or so. But I still count them.

Greg: Nothing from Southeast Asia or Indonesia? Don't be shy!

Tarheel4Life said:
How many rooms have you played in?
Click to expand...

Just three -- the living room, the kitchen, and once in the bedroom....

BGinGA said:
and once in the bedroom....
Click to expand...

Josh Kifer said:
I'm guessing that was a heads up game.....
Click to expand...

Not a group game?

pltrgyst said:
Greg: Nothing from Southeast Asia or Indonesia? Don't be shy!
Click to expand...

Just the 2 casinos in Cambodia. I went to 2 casinos in Singapore but they didn't have a game.
I was in Hong Kong for 5 days but never got over to Macau, which I really regret.
I don't think there was a casino anywhere I was in Indonesia; maybe Jakarta but I was only there for a day and a half.
I don't think Thailand had any, there was a poker room in the 'border-land' between Thailand and Cambodia but
the reviews on the web were so terrible that I skipped it.
Oh, and when I was in Kuala Lumpur @jemfernandez was nice enough to invite me to his home game!
E

I think the biggest play I've made in several rooms has been 3, I don't exceed that number. I'd lose focus.

After seeing @fish72s' list, I'm convinced I need to get out more once we're allowed. Off the top of my head, I've played at:
Of that group, I enjoyed the Luxor the most. It's a small poker room, but there's something about that seeing that pyramid upon arrival that gets me every time. 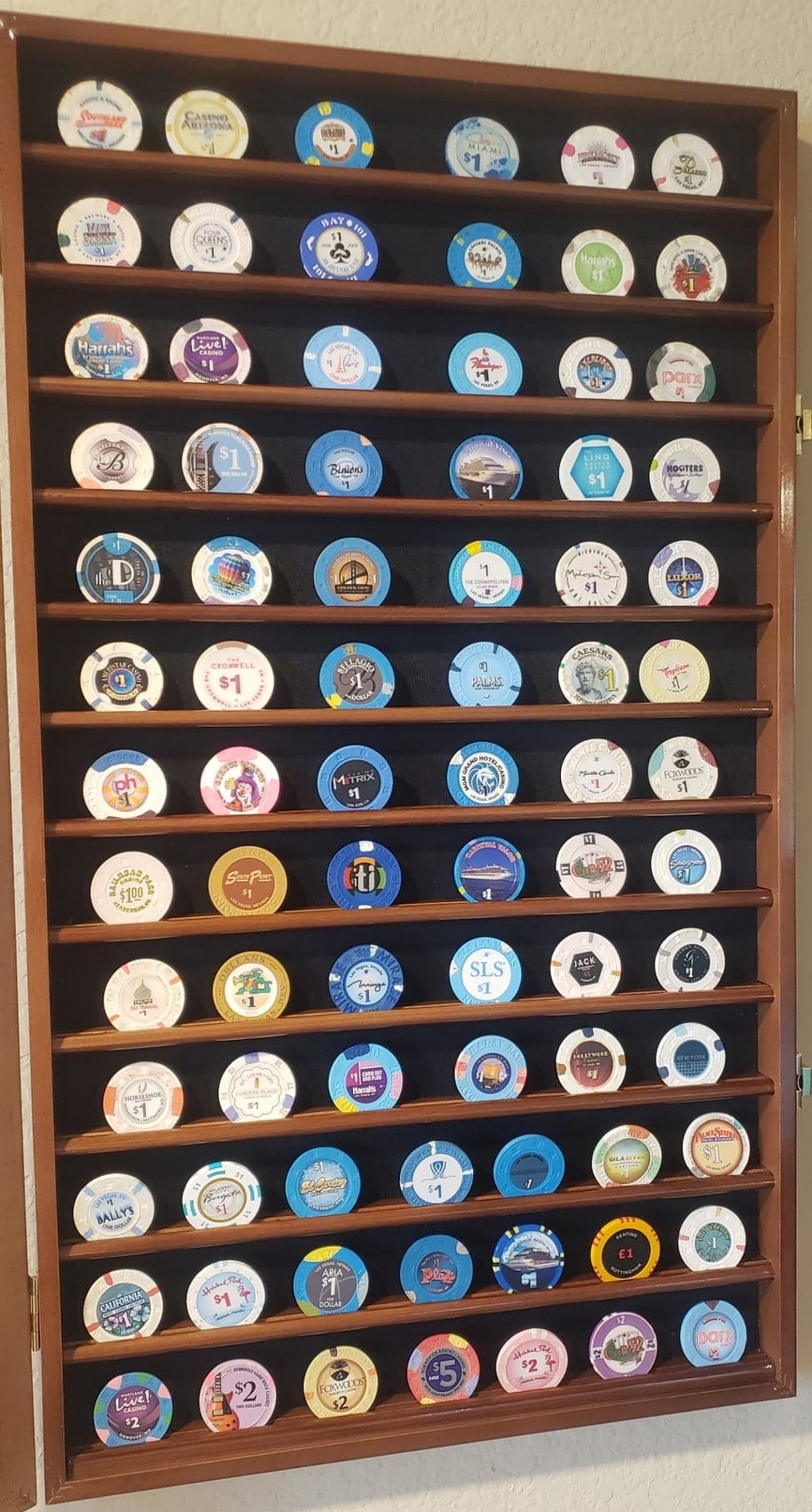 All those places... looking to go to Macao once the protests/virus crap gets under control...
P

I haven't played in a card room in years. A decade ago, for 2/4 or 3/6 LHE:
- Luxor was the ultimate aquarium of easy money. Luxor was always my room in Vegas, even with those icky ceramics they use.
- Commerce, Eldorado, GVR offered easier limit games with 3-5 seeing the flop.
- Nugget & Hollywood Park featured experienced players the one time I've played at each. I'm a decent limit player, but got soundly beat at the Nugget in May 2015. It was one of those "if you can't tell who the sucker is within 30 minutes..." situations. HP was more a slow bleed.

I don't get out much.

so, eight.
But I'll never go back to Chasers or Twin River, because they don't have tournaments, and i just don't play cash any more. My favorite room was Hampton Falls - nice atmosphere, good staff, great tournament formats, variety of cash games and regs who generally ranged from mostly competent to good. Which explains why Encore Boston took so much of their business that they had to sell to The Brook, who bought them just to shut the doors.
So now my favorites are Encore, because it's just gorgeous, luxurious, and nearby, and The Brook, because as annoying as it is to play against lousy competition, it's pretty easy to make money.
B

I have played in a bunch, but my favorite was the MGM room when it was next to the sports book. Especially when the lion enclosure was there and it was fun to lion and people watch.

I can be seen in the audience for about 1 sec during Day 5(6?) coverage of the 2005 Main Event when Raymer busts the fire fighter. Also saw the hand between Sheikan and Tiffany Willamson where she tanked for 7 minutes with KJs against Sheikan's AA shove preflop. I remember thinking at the time she must have had like JJ, QQ, AQ, or something. But no, KJs. I was dumbfounded when I watched it later.

I was in the audience (can't be seen) for the first few hours of the 2005 ME Final Table at Binion's. Saw Matusow take that AA vs. KK beat, it literally was the 2nd hand just like on the broadcast. It was also hotter than hell in there.

Here are Casinos I played Poker in. My parents had a townhome in Henderson, NV before. I used to go their yearly or two times in some years. I always played at the Green Valley Ranch because it was across the road from the townhome. But I’ve hit a lot of them in Vegas. Obviously the Casinos in NJ, PA, and CT because I live in NJ. My wife is from Manila and her Parents still live there with one of her brothers so I’ve played in the Cainos in Manila and if always has to be only for an hour or less as I’m always with Family when we go. Here’s the list.

fish72s said:
It was too big for one post......
But, like I said in the OP, many of these were for short sessions of just an hour or so. But I still count them.

Winstar - Thackerville, OK
Ameristar / Isle of Capri - These are both in Missouri You can add that state to your list!

Well may as well update my list since the last thread.

Nevada (All in 2011, need to get back out there again)
Aria
Bellagio
Flamingo
Hard Rock
Mirage
Wynn

I mentioned these in my intro post not long ago...but here's the full list of 123 (and counting):

Hey everyone, this is my first post to this forum. Started browsing tonight and found a thread I can chime in on. I don't have my list composed yet, but I will come up with one as it will be fun to see how many rooms I've played in over the last 25 years or so. My first one was at the Flamingo in Las Vegas in the mid 90s. I played 7 card stud and it seems it was a 1-3 spread limit game. I didn't know how to play holdem at the time, only knowing 5 card draw and stud games that I played at home games since I was a boy back in the mid 60s. I sure do miss playing stud in a card room or a casino. Now I mostly play fixed limit games, 2/4, 3/6 and 4/8. Seems fixed limit games are getting harder and harder to find. The last two card rooms I played in were the Marina Club in Marina, California and Pechanga near Temecula, California, back in February of this year. I love both of those rooms and they are so different, in style and types of players. That virus has sure ruined live poker, so haven't visited a poker rooms since. I'm going to guess about 25 poker rooms and I'll compile my list soon.

In Vegas, Luxor, Imperial Palace, Flamingo, Treasure Island, Harrah's, Bellagio.
In Belgium, casino de Spa and some local clubs (maybe 5 different ones).
You must log in or register to reply here.