I am placing a bid on a crescent star vintage chip set. The set includes 350 cresent star poker chips, as well as another chip mixed in that I need help identifying. The chip is plain with the number across it. I cant find anything to match online. What are these, and do they have any value?

Also, those are Paranoid chips, and that holder looks like.it has more "B" chips than Cresent star chips. I also am watching that auction.

Here are some examples of these types of numbered chips; they were made by the US Playing Card Company. http://chipguide.themogh.org/cg_uspc_pix.php?id=Samples-Inlaid numbers

An interesting thing to note: see how the numbers are all connected? That's because these are inlaid chips, and the numbers on each chip are a single piece that was placed on top of the blank chip right before the chip was placed inside the compression mold for its final pressing. These placements were (and still are!) done by hand. It would be too difficult for the press operator to place two or three separate digits and make sure they were well-aligned, so instead the inlays were designed so that each chip had just a single inlay consisting of multiple numbers as needed. The operator just had to make sure the inlay was placed more-or-less in the center of the chip.

This is the same process used to make the symbol chips like the crescent-and-star chips you're bidding on. The inlays are die-cut from a thin sheet of plastic, i.e. they're cut using a shaped punch. The inlays are put onto a blank chip that's almost but not quite finished, and the inlay is pressed into the surface of the blank by the mold press; the press also heats the chip and cures the clay (which is actually plastic) so that the chip is firm and hard rather than soft and pliable.

Here's what the inlays look like when separated from the chip they've been pressed into: 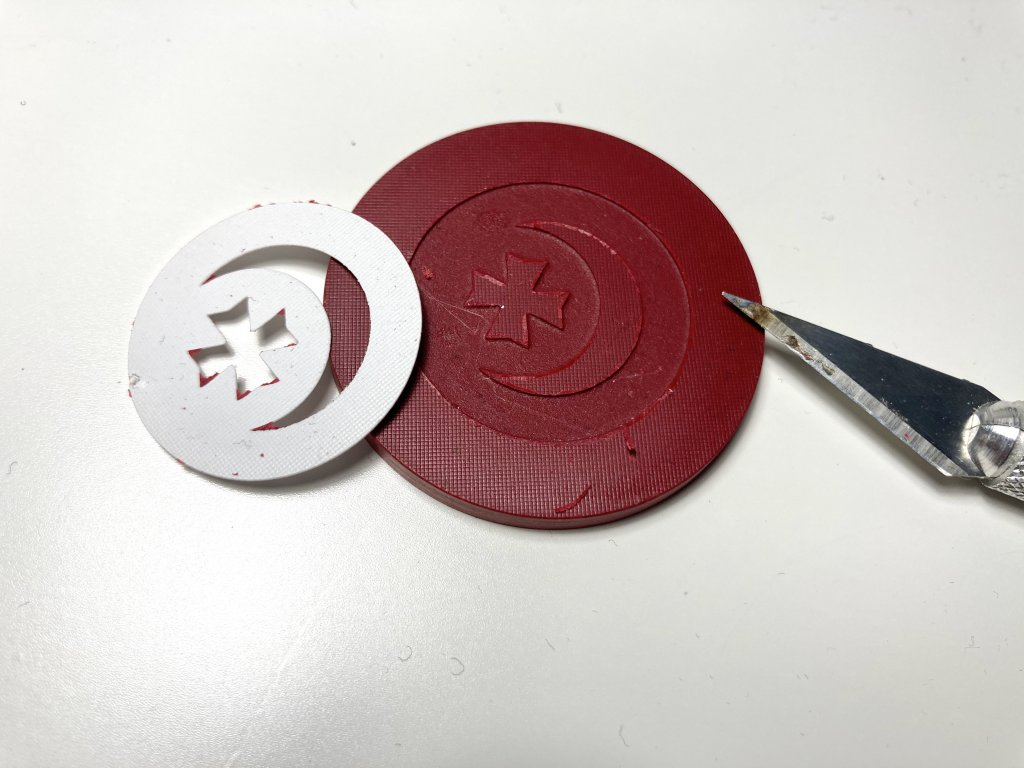 These lammers aren't particularly valuable. They show up on ebay from time to time, usually as part of a mixed set of Paranoids and other old but mostly unremarkable chips. Most poker chip collectors wouldn't be interested in these.

You can learn more about symbol chips like this (which we call "Paranoids") by checking out this thread and this thread.

Welcome to the forum!