Got a delivery from Joe @ Palm Gaming! Pron Inside!

Without further ado, here's some pictures of them all 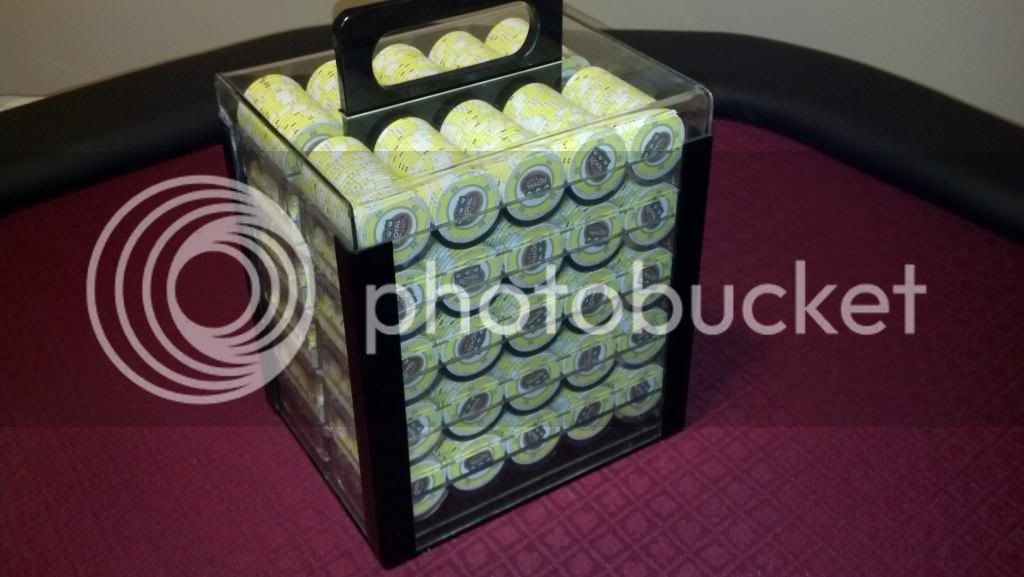 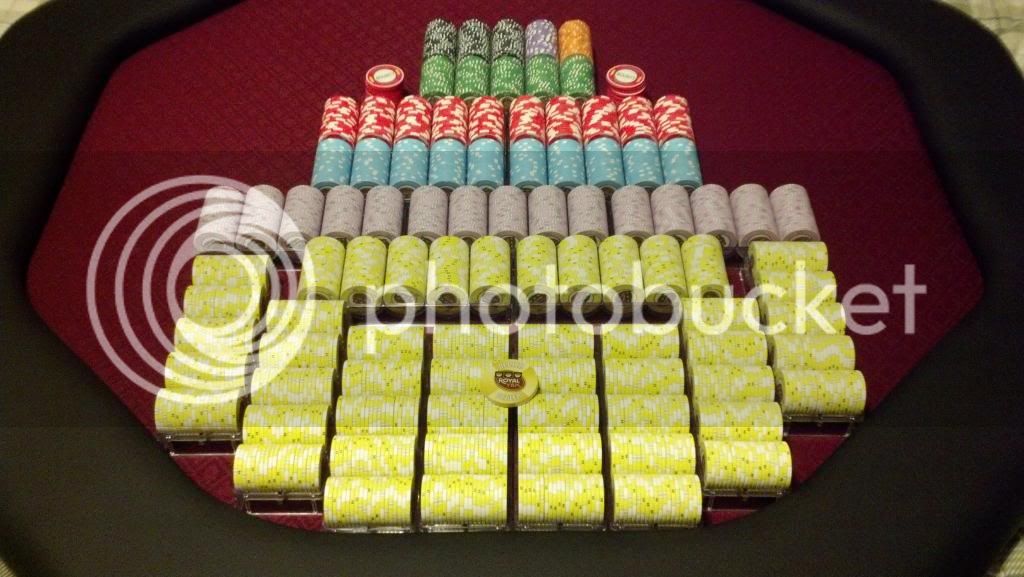 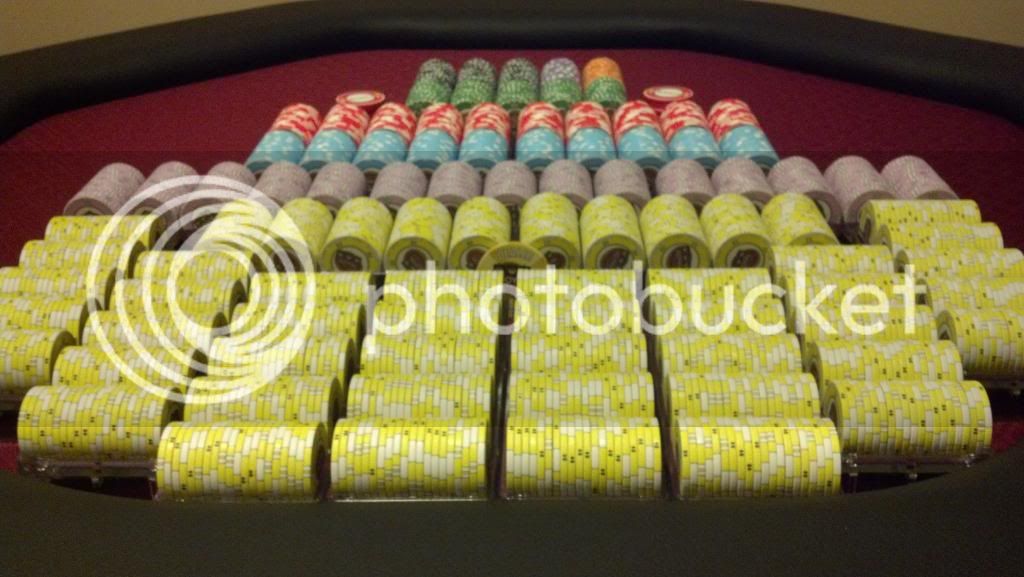 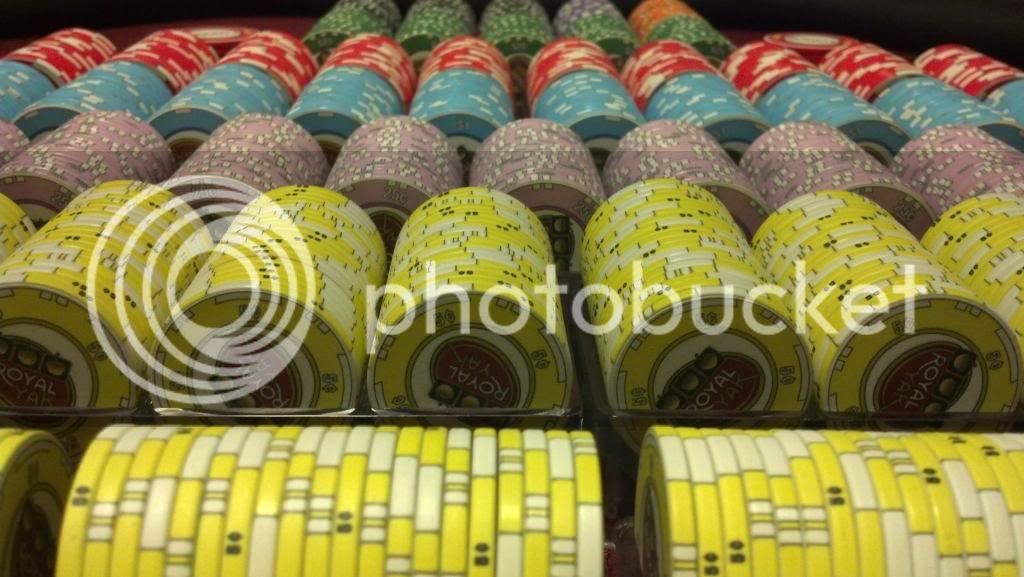 So, how do they compare to your earlier chips?

CdnBeerLover said:
So, how do they compare to your earlier chips?
Click to expand...

I did check and they are all identical in height from the previous 2 orders I've made. The 10 additional chip racks I got however are not. The part where the chip sits in is fine but the underside is too narrow so you can't stack them. Thankfully I have enough from a previous order for all of these but the 10 new ones I got are definitely not going to work for stacking because the underside is only like 64mm.

Sweet! That's a lota nickels! I put in an order for some orange ones not too long ago.

Mr. Cheese said:
I did check and they are all identical in height from the previous 2 orders I've made. The 10 additional chip racks I got however are not. The part where the chip sits in is fine but the underside is too narrow so you can't stack them. Thankfully I have enough from a previous order for all of these but the 10 new ones I got are definitely not going to work for stacking because the underside is only like 64mm.
Click to expand...

Excellent news on the chips! That's an awesome set you've got there. Congrats!

Very nice, I am waiting for a sample set. Wanted to see them in person and put them in my display case.
S

Wow... 1,000 nickels is really... I'm searching for a word that means something like "impressive", but in a scary sort of way!

I didn't realize you were running a 10 table ultra-micro cash game poker room! Or is that another shrine? Or are you running a $20 buy-in game in which you don't have starting "stacks", but TWO starting RACKS (presumably for a bunch of players who like to practice their addition skills throughout the course of the game)?!

Sure is pretty, though!

That's the pits regarding the racks. I'd certainly let Joe know and have him exchange them for replacements that DO stack. I'm confused, because I thought he said that he was making Chipco branded racks from the original Chipco rack molds, albeit with a different formula of plastic.

I have 20 original Chipco racks, and they're among the best quality racks I own. Quality control is great, with consistent width, depth, and stackability. Also great is the fact that they are actually ACRYLIC - not some sort of clear hard plastic like polystyrene that breaks the first time you drop or bump them.

I can't remember the exact width of the original Chipco racks, but they work great for pretty much everything (Chipcos, Paulson, BCC, Bud Jones) except for heavily casino worn Paulsons, e.g. Aztar primary $1, Par-A-Dice $5, etc.

If you can find some, I'd highly recommend them for your Yaks and just about anything else. Oh... I have about 32 Bud Jones racks, too (for the roulettes), and they're extremely similar to the Chipco racks, and would also be a good choice, but they're rather hard to find.

EDIT> One last idea: I haven't yet bought any, but GOCC sells racks for a very reasonable price, just as they did when those folks were still Chipco. I would expect similar or better quality (hey, they took the quality of the chips up a notch!) relative to the original Chipco racks, so that might be a great option. I still haven't cashed in my contest winnings with GOCC (waiting to see the group buy sample Aviators), but when I do, I'll buy some of their new racks, too.

How long until we see some of them for sale?

. We all like having giant starting stacks and lets be honest, you can never have too many chips lol.


Tommy: These I'm "planning" to keep. The Yaks actually have had the most play out of any of my chips. We always play a cash game and only occasionally play a tourney.
S

Well... yeah, I think that was easy enough to figure out! =)


Mr. Cheese said:
I like to get everyone 3-5 dollars in nickels

Oh dear Lord, you guys really DO like practicing your addition and counting skills a lot! You DO realize that in a 5¢/10¢ game, giving everyone just ONE dollar in nickels lets them pay 20 small blinds or 10 big blinds, right?! That's a lot of hands!

Mr. Cheese said:
...and lets be honest, you can never have too many chips lol.
Click to expand...

<sigh> Sadly, me arguing THAT point would be like the proverbial throwing of rocks in a glass house. I shouldn't go there.

Location
West of the Chicago

Thats a lot of nickels ----- much better than playing with actual nickels and dimes I'm sure!

Had 800 nickels in play last night. Everyone got a rack of nickels with their buy in. It was a .10/.20 game. Everybody loved having the huge starting stacks

This was a hand I won. It was heads up with another player and we decided to make our pot very organized when we were betting lol.

Oh there were plenty of huge splashed pots. When everyone decides to bet a dollar and everyone uses just their nickels, the splashed pots get huge lol!

this is my favorite hand movement ....
in our company there is one guy ... so they just tilt when I do so ... loves accuracy.
You must log in or register to reply here.
Top Bottom