BUILDING A ROULETTE TABLE FOR THE KEY WEST'S 32-INCH PAULSON WHEEL
or, "How a wayward pizza and some misguided prisoners helped me get a roulette table"​
The photos: 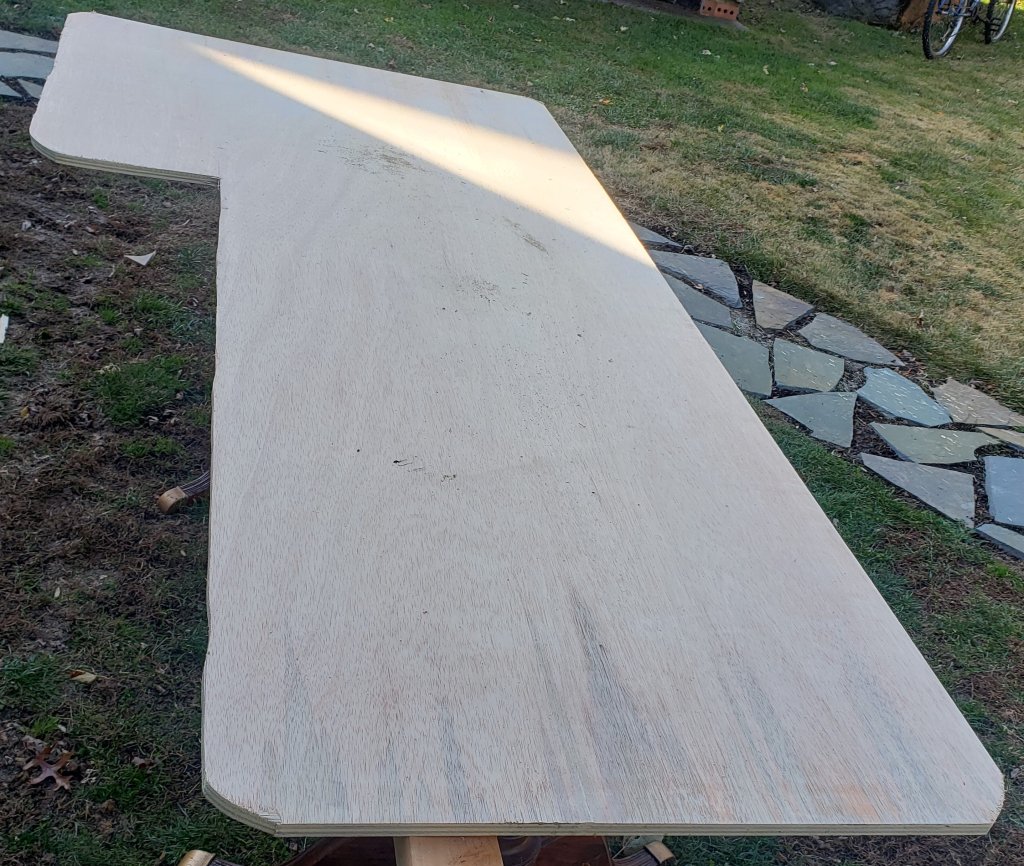 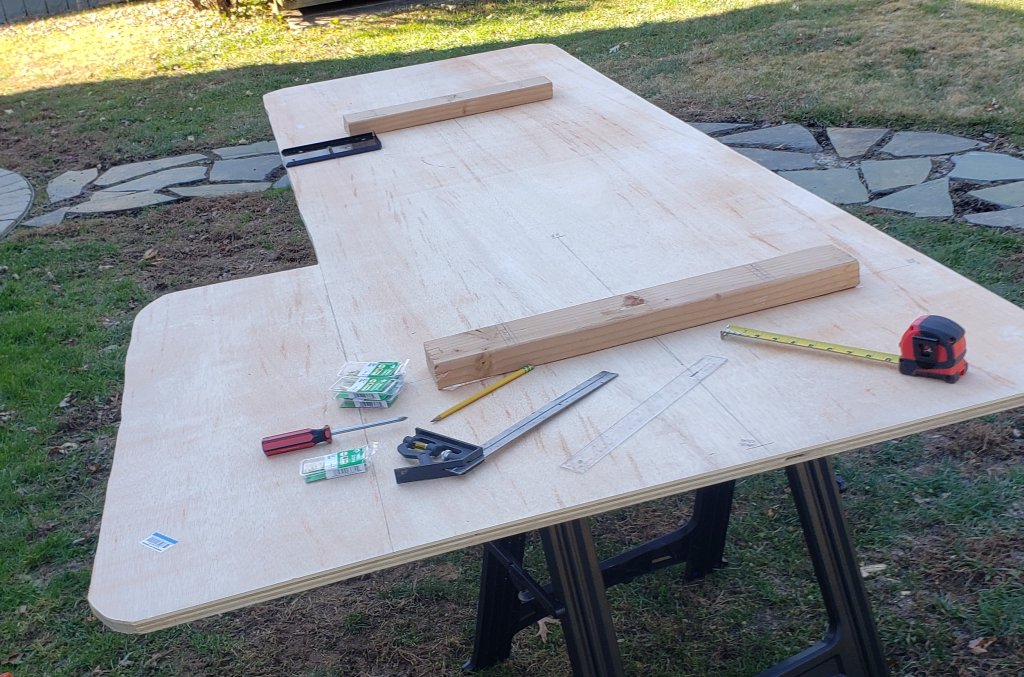 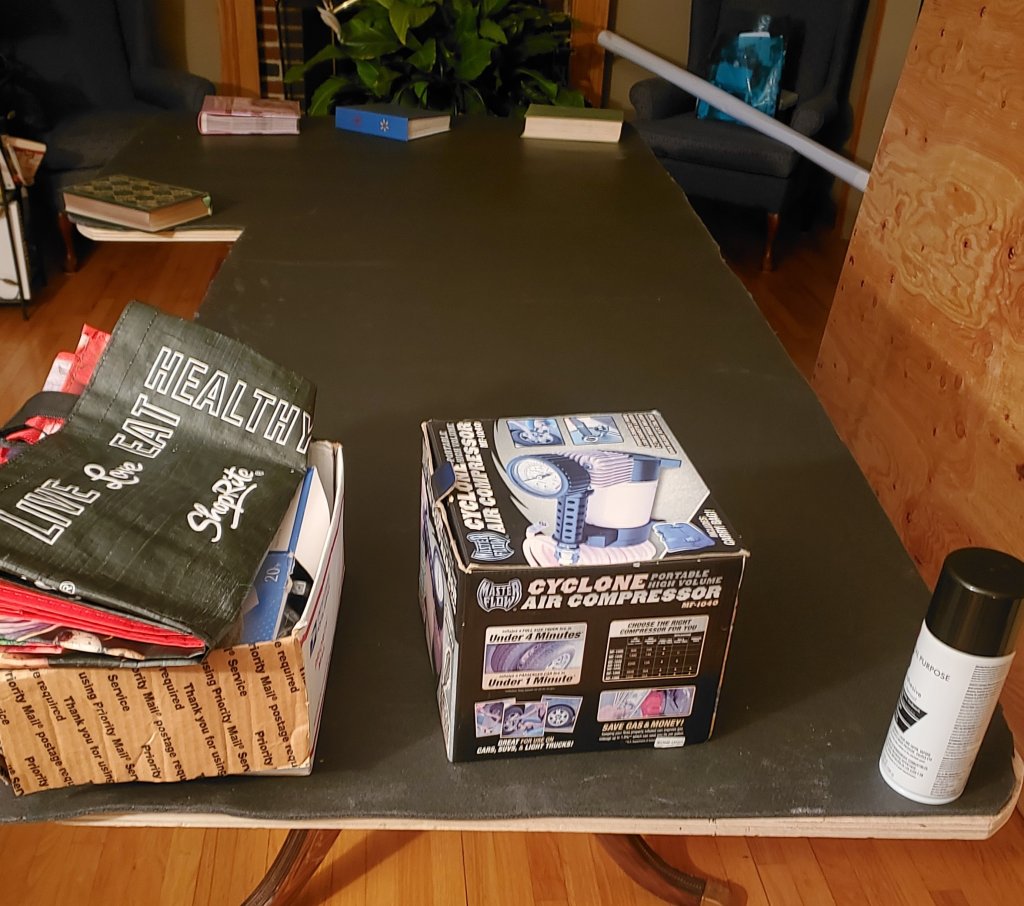 The table top, cut from a 3/4-inch 8' x 4' plywood, top (left) and bottom (right). 2 x 4s were centered, glued and bolted down, and the bolts counter-sunk. They'll sit on top of each pedestal, and the pedestals' original screws go upward into the 2 x 4s. The pad got an initial trimming and glued with spray adhesive, and odds and ends were used to hold down corners before another, tighter trim. 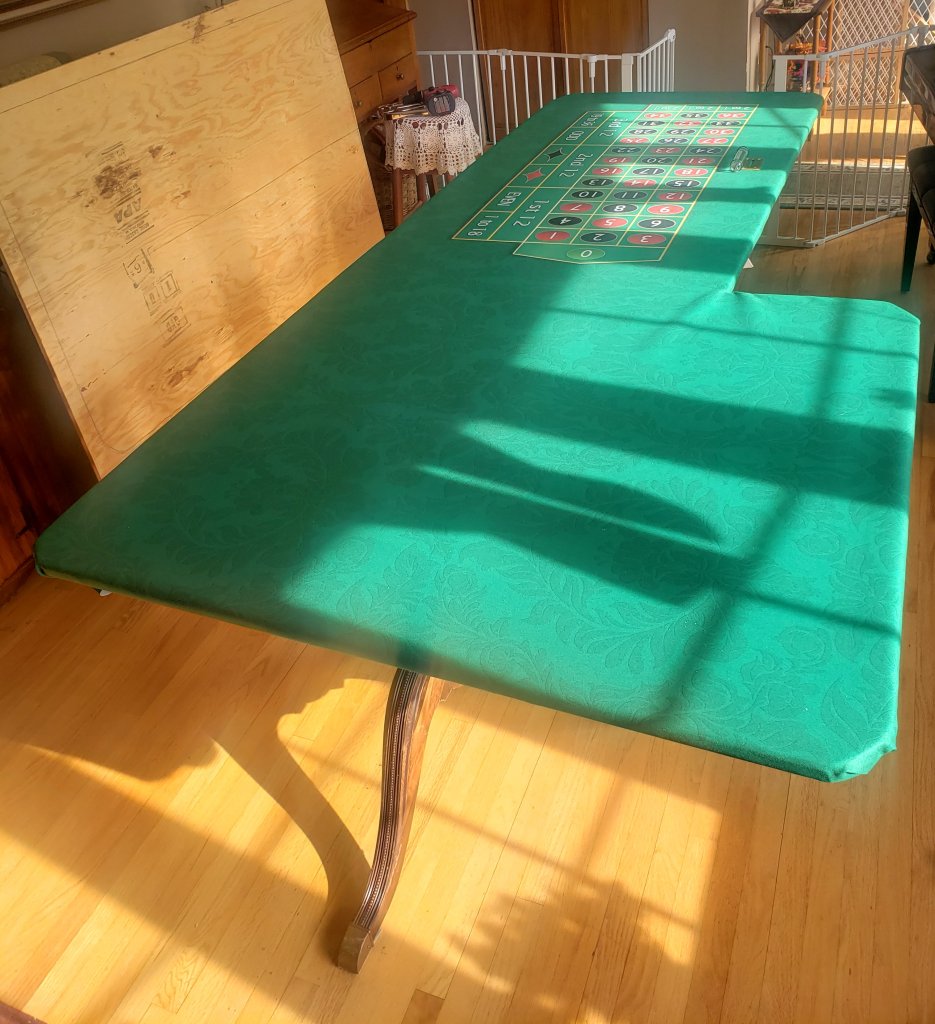 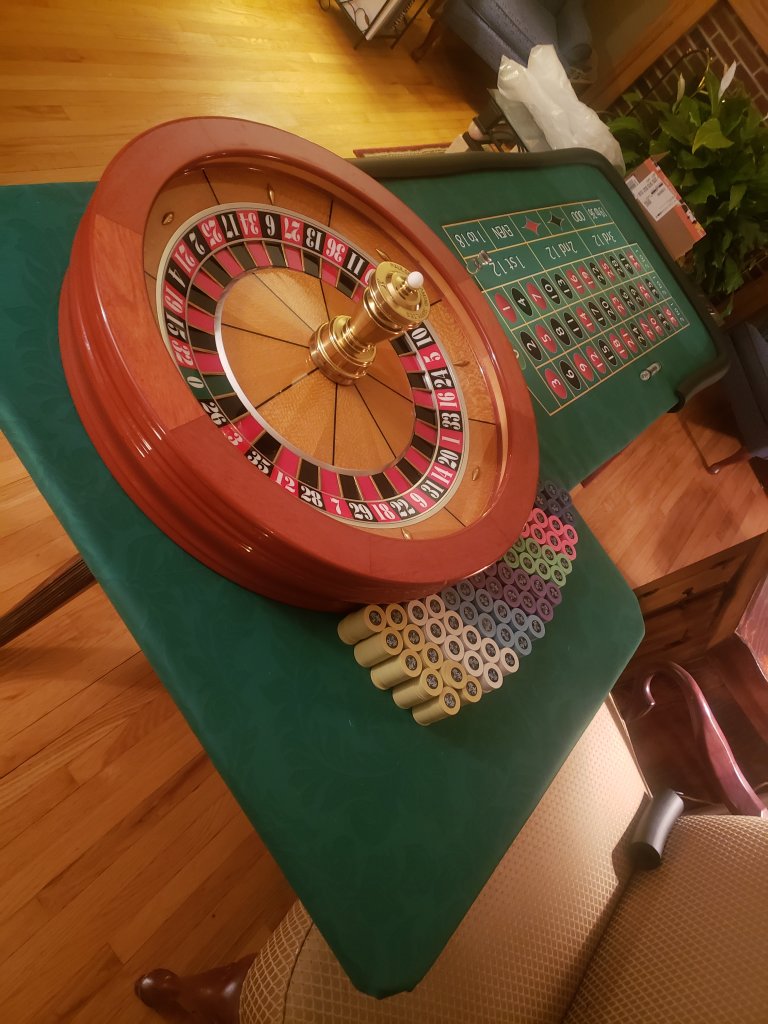 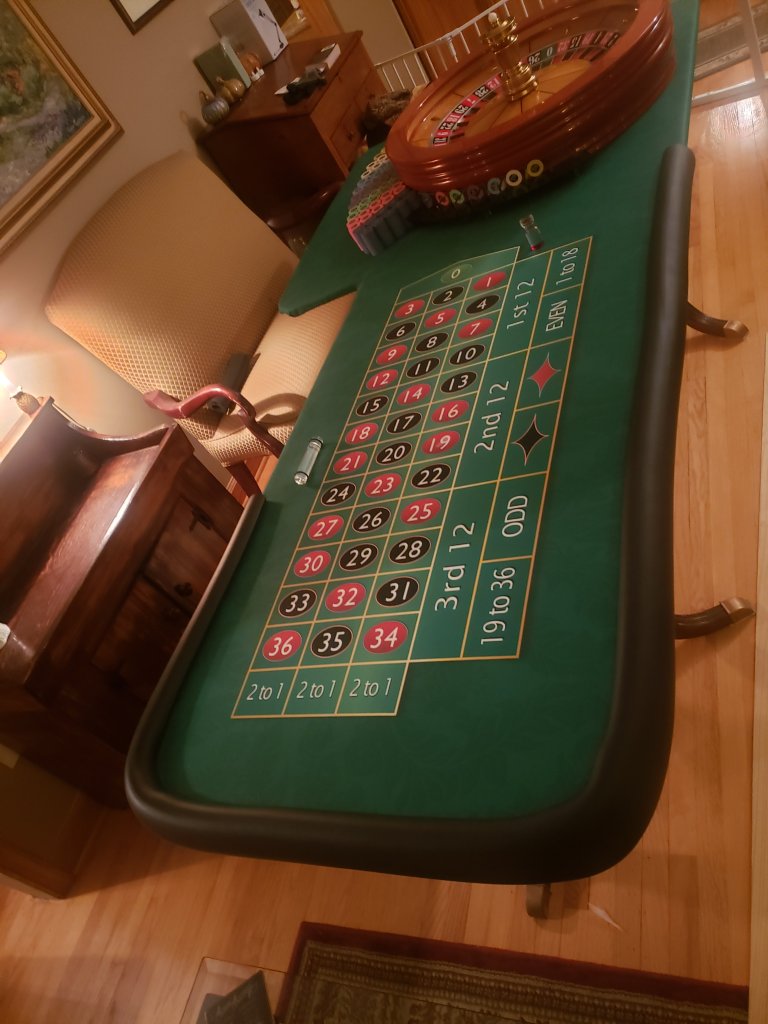 The layout was added to the table, (left) and here still needs some tugging, pulling and stapling. Since time was short, I added 10 feet of "Perfect Padded Rail," bought online. It's a simple solution that can be easily removed later when I get ambitious to do a lighted, raised rail. Center and right: Still a work in progress, with some planned adds when hardware arrives, but we're getting there. Finished size: Length: 8' / Width: 46" at the wheel, 33" along the playing area (numbers) allowing 6.5 inches of space on each side and at the bottom of the table for player chips. Shown with 1,400 Key West roulette chips in seven colors. ​

In 2019, I was fortunate enough to buy a 32-inch European (single-zero) roulette wheel made for Paulson by TCS John Huxley, from our friend, @Tommy. It's gigantic and heavy, weighing in at about 180 pounds. Tommy helped me lug it into my basement. Without a suitable (and sturdy) roulette table, it languished down there ever since, getting uncovered for only the occasional online contest.

About two weeks ago, my wife casually said, "Don't forget we're having a casino party for my work friends on December 4th, and I told everyone we're playing roulette." Like all husbands, this is the first I had heard of this, so I began to panic. I had two weeks to come up with a full-size roulette table strong enough to hold up the anvil that is my wheel.

Enter my aunt's old and formerly cherry hardwood dining table. She gave it to me in 1995, when she downsized her house in South Philly and I was moving to an apartment with some roommates. The table was from early 1900s Philadelphia, and had two mighty pedestal legs holding firm to a large table top that was mirror-polished cherry. You could see your reflection in the finish.

At least until "The Pizza."

Late one Saturday night, one of my roommates ordered a pizza delivered to our apartment. It arrived, hot and fresh. And hot. And he put it on the cherry hardwood tabletop. Did I mention it was hot?

Yes, it permanently marred the finish with a white, filmy bubbling mess in the shape of that pizza.

"What can I do?" I thought. A coworker suggested using his contact with our state's Prison Industries, where inmates learn a trade by doing work like refinishing furniture.

"Perfect," I thought. We loaded the table into my truck and off it went to the prison, 60 miles away. Two weeks went by, and I received word that the table was "finished." (As you'll see, they were right.)

What came back to me was a table, but it looked like my beautiful cherry table had been skinned alive, and was now a sort-of red oak or light brown finish -- the color you always get when you use cheap stain. It turns out that the prison didn't have cherry stain, so they grabbed a can of something they thought was similar and went to work. The table was effectively ruined, but it wasn't their fault. The table sat in storage ever since.

But the pedestal legs would be the perfect solution. Centering one directly below the center of the wheel was the answer. Off I went to the giant hardware store for some 3/4-inch plywood. Intending to do this build for some time, I already had a single-zero layout and some table hardware, like the money drop box and paddle.

Most of the drawing, measuring and cutting took place during a long first day. I cut out the shape of the table, sanded, then measured and glued the 2 x 4s to the bottom of the table. Letting the glue dry overnight allowed me to flip the table onto the patio so I could measure and draw the exact location of the 2 x 4s under the table (since I couldn't see them), then screw bolts down through the tabletop and into the 2 x 4's and counter-sink them.

It's still a work in progress, and some table hardware has yet to arrive. (The money drop box frame is on the way this week.) I haven't selected finials yet, but they'll be an easy add. I'm finishing some nice wood trim, which will extend from the hook to the padded rail on the dealer's side to prevent chips from falling off the table when mucking.

My table has a "left-handed" layout, meaning when the croupier stands at "the hook," the wheel will be nearer to his or her left hand. I had to request a left-handed, single-zero layout that was custom-printed over a year ago. It's a dark green "Monte Carlo" layout with a nice background design in the material.

Finally, kudos to my awesome wife for giving me this deadline, and for helping lug the wheel up the stairs. It was an engineering feat in itself.

Issues I found / things I learned doing this:

More photos to come next week, after the event.

A few more photos as we get ready for tomorrow's event. More later this weekend. 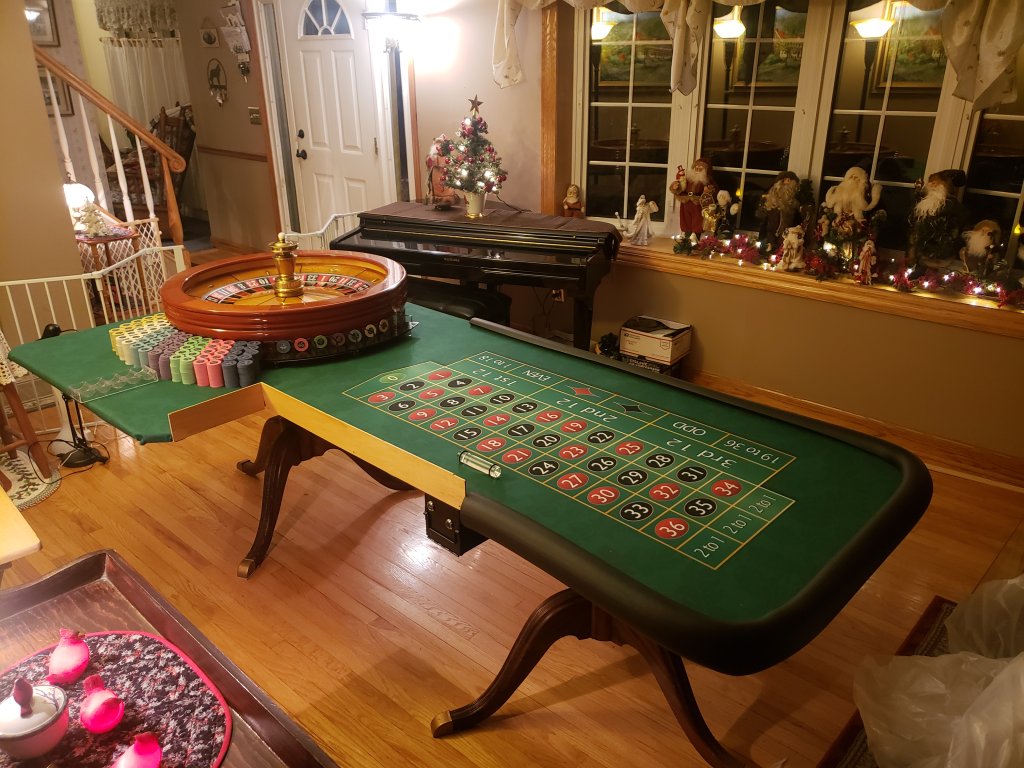 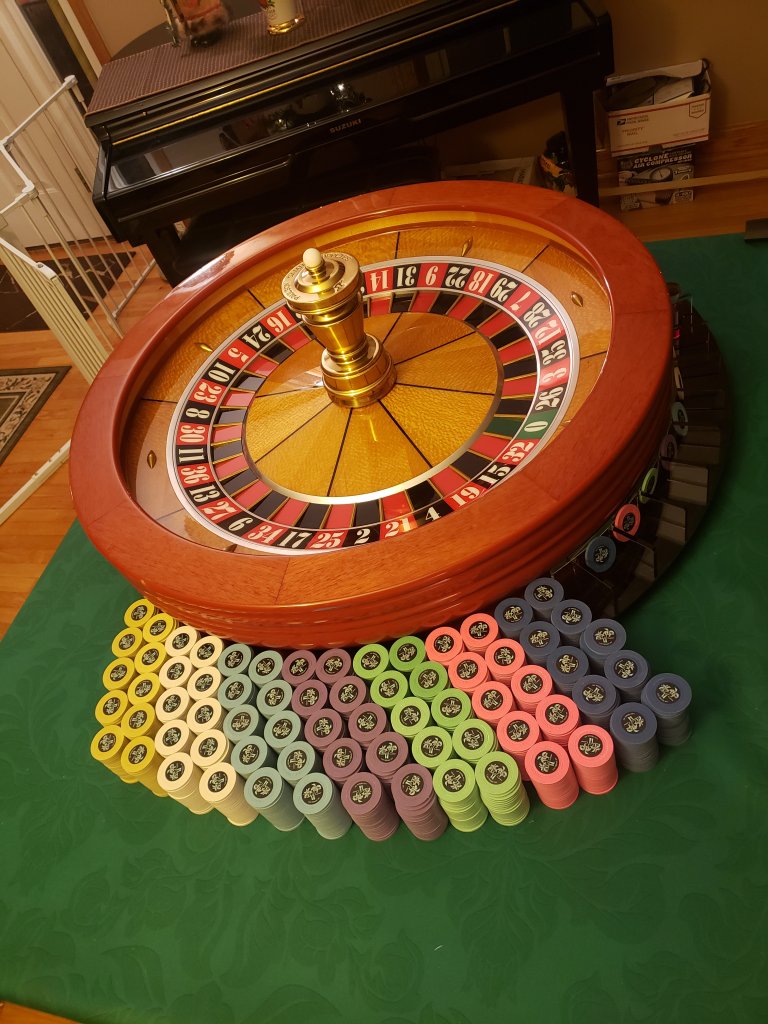 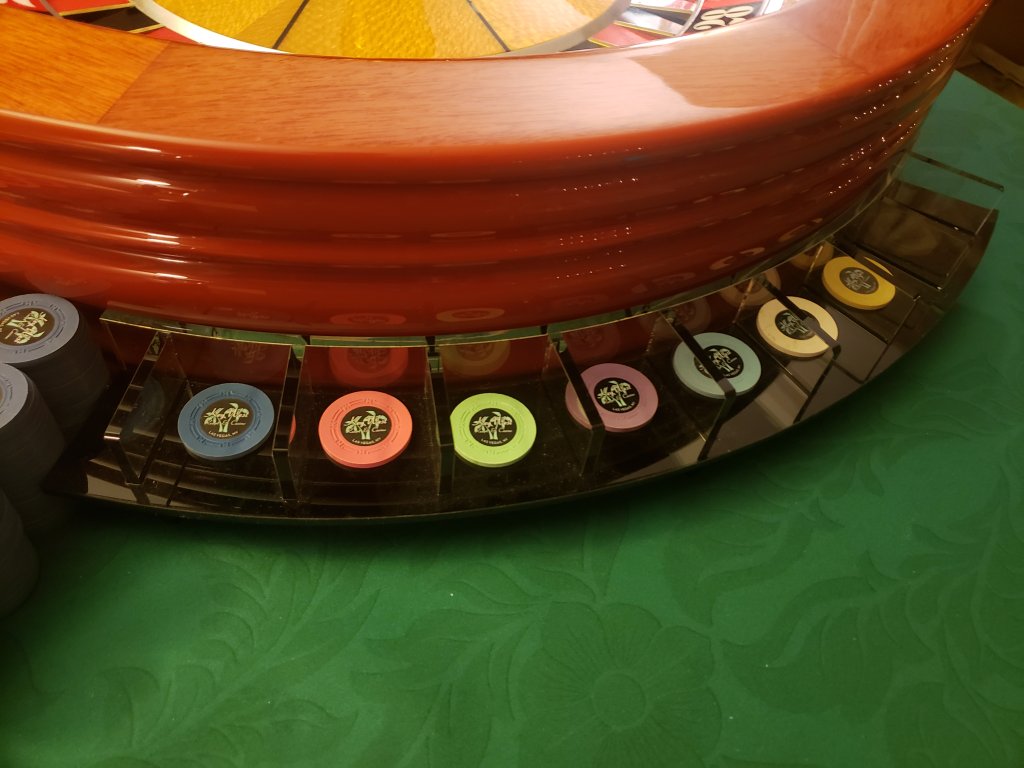 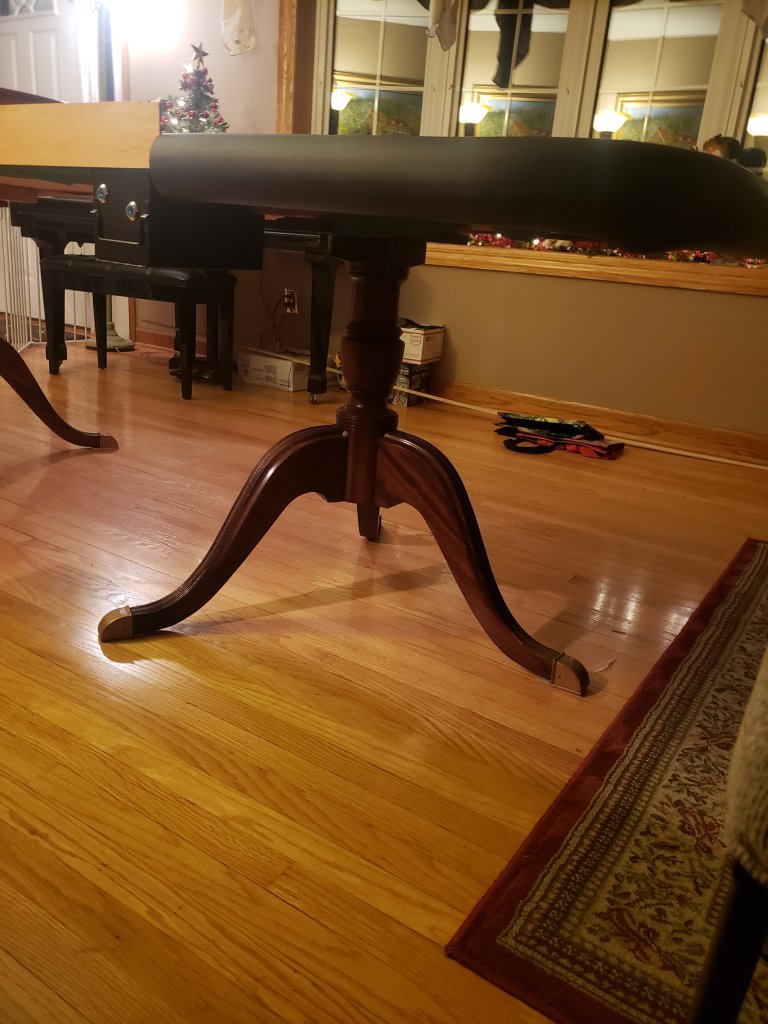 I thought adding a monitor would really be a nice touch. 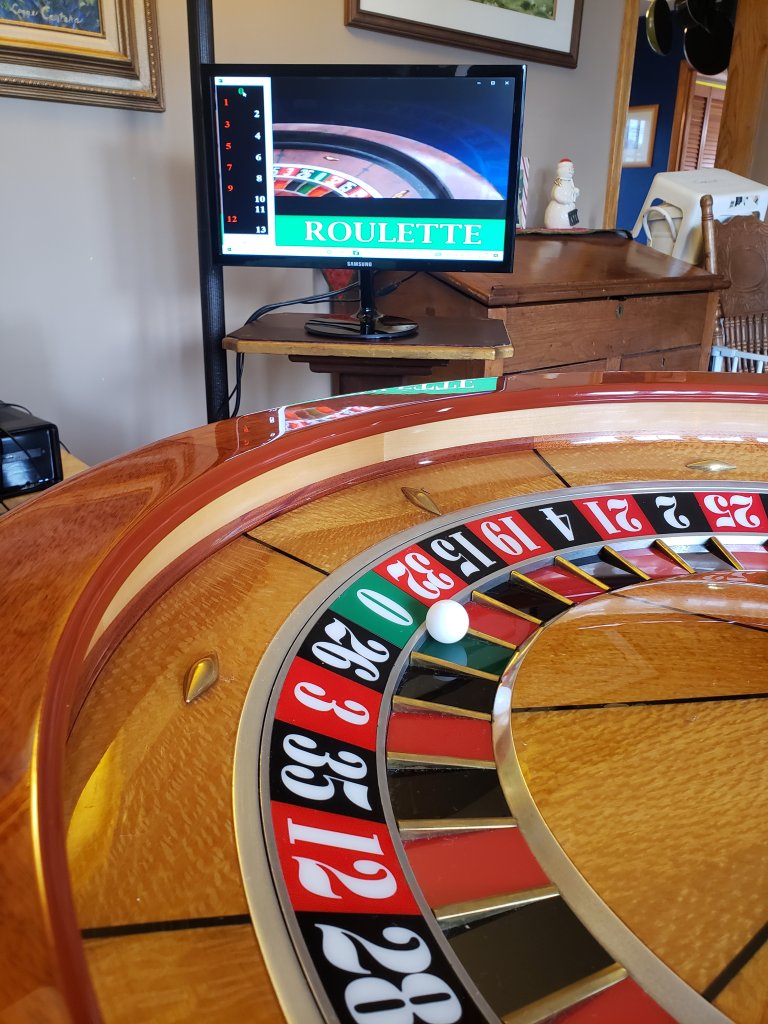 The whole set up look so well done 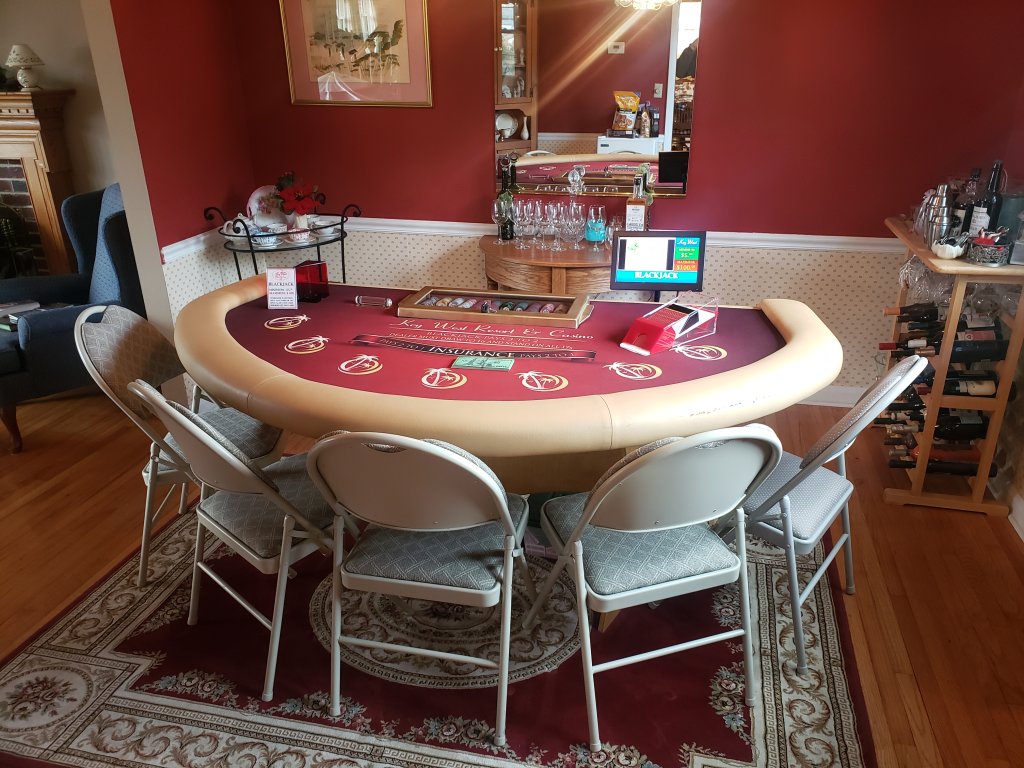 Blackjack set up in the dining room. We thought the red layout table would look best in the room with deep red walls.

The small monitor has a similar configuration as the larger roulette monitor. Screen background with a video player open.

We used this table to deal blackjack to folks at my Dad's retirement community before COVID.

Very nice setup! I hope to finish designing my custom roulette table in the near future!

dennis63 said:
I only had to go to the emergency room once.
Click to expand...

Good lord I hope you still have all your appendiges.

What's a great setup, and glad to see grandma’s table get a second, more degenerate go at life. Hope the party is a raging success. 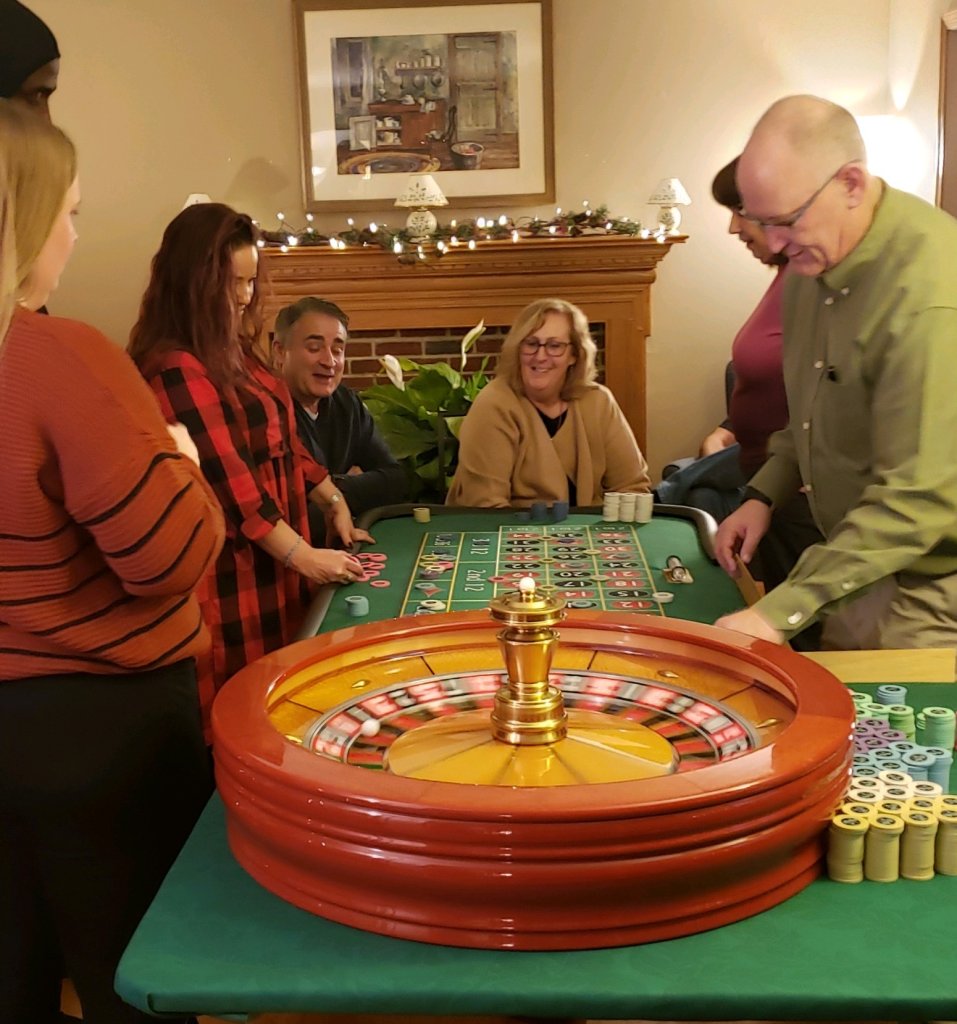 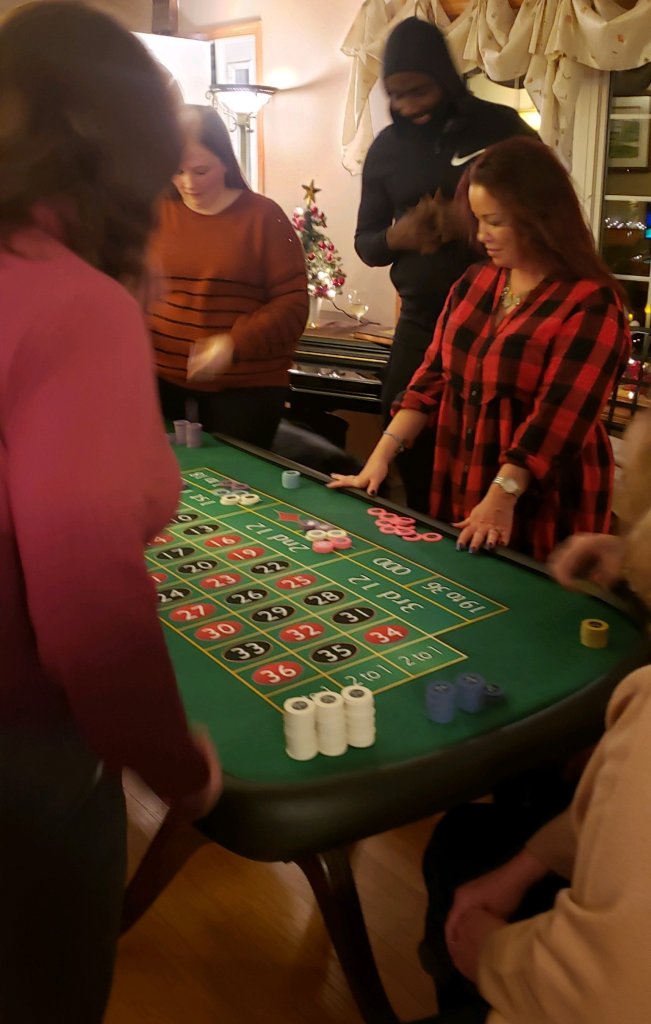 Left and right: Six players at the wheel.

Relaxing and playing a little blackjack on break from the roulette table
​
The update:

My wife invited around 15 people, and 10 or 11 showed up. Everyone arrived around 6, had a drink, and ate lots of food. (We ordered way too much.) Play started around 7.

People can be hesitant to jump in if they've never played the game before, so we had a prepared strategy: My wife and two of her friends started playing roulette. Within about 10 minutes, we had six people placing bets on the table, and I quickly understood why the casino has a chip sorting machine

Both tables (roulette and blackjack) were active. Only one person hit a straight roulette bet (on "23") to win 35 to 1. My niece stopped by to deal blackjack, as she has in the past. I took breaks from the roulette table and got to play a little blackjack (and even deal some).

At the end of the evening, all chips and other equipment were present and accounted for. Everything went better than expected, and people really seemed to enjoy themselves. So was it worth what turned out to be quite a large effort? Absolutely, yes.

My wife had the best line of the evening. After everything was set up and ready, before the guests began arriving, she was looking around the living room and dining room, taking it all in.

Her reply was priceless.

"I think we live in Wayne Newton's house."

The table and equipment: What I learned: 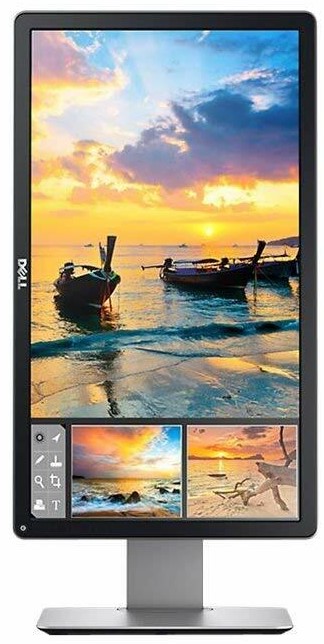 Here's a link to a FB video walkthrough of the setup before the party. I wish all of you could have stopped over. (Wouldn't embed for some reason.)

So here is the monitor I should have had for this event -- a Samsung 22" tilting monitor switched to landscape mode with a fitted background. I'm still messing with what should be on the screen, but this is one way to do it. 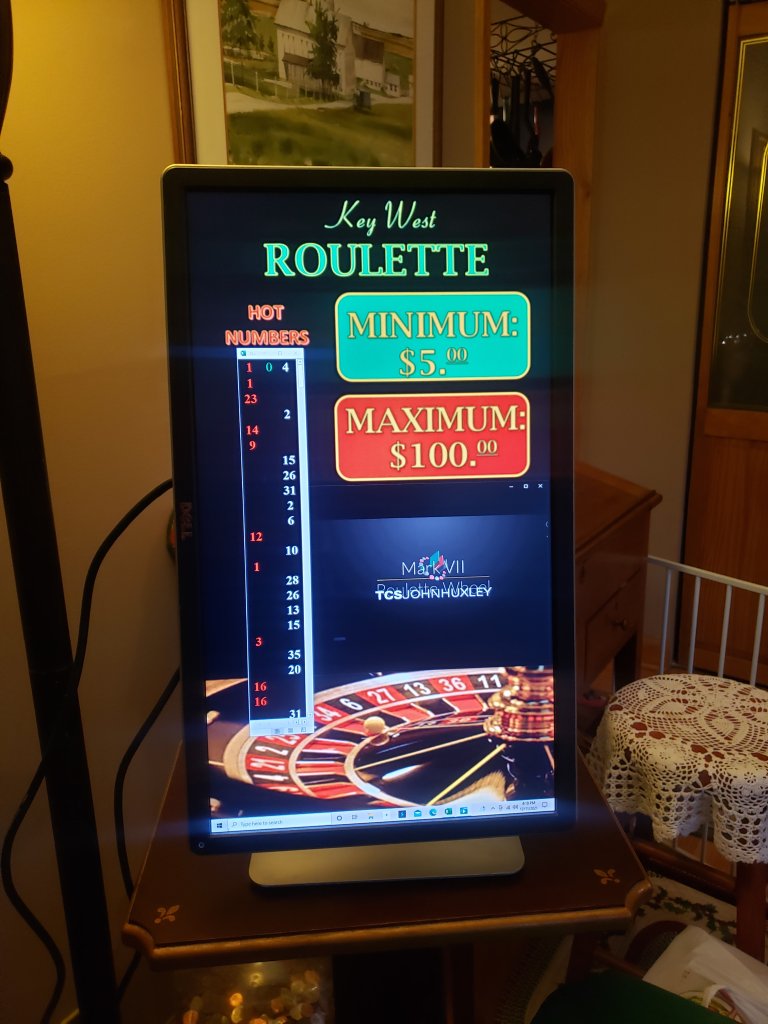 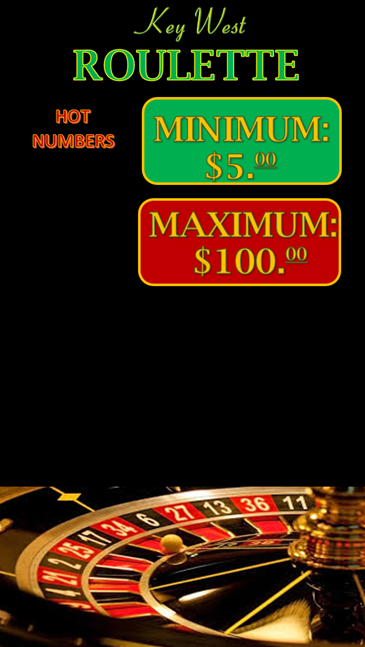 The new monitor (left) in "Portrait" orientation running a media viewer video
and an Excel workbook showing numbers. At right is the screen background. ​

Such a sweet setup. You need to offer up a livestream game.

Quicksilver-75 said:
Such a sweet setup. You need to offer up a livestream game.
Click to expand...

Considering some kind of livestream of roulette and / or blackjack in 2022.
You must log in or register to reply here.

Tuesday at 10:50 AM
TheWhiteJZ
T
B
Craps Table Build (Portable)

Experimenting with a DIY RFID Table and Broadcast Overlay
2