Final Artwork from CPC for my Royal Mauian Custom Set

I have just signed off on my set to be produced through CPC. I have wanted a custom set for many years and have finally been able to make it a reality. It took quite a bit of time to decide on spot patterns and colours. I had lots of opinions from my wife and daughter. As documented in the original thread. Once colours and spot patterns were decided upon my wife Stacey, who is a graphic artist starting working on the inlay. My original idea was based on the classic Dunes with the green on it. I love those chips and my first set of chips was the original Dunes Commemorative group buy. I wanted something similar and there have been some variations on that idea. Three Putt Poker from @links_slayer and Carmel Casino from @Eriks which to me has a similar feel. I think both of these sets are fantastic and I wanted to attempt capture something similar for my set.

As a family we have been fortunate enough to have gone to Maui 5 times so I have a very deep feeling for the island and thought it would be fun to base a fantasy casino with regards to it. There is a Royal Mauian condo in Kihei but I doubt it could ever pass for a Casino. I won't go through how many variations we came up with but the final artwork Stacey came up with is terrific. She has done a really nice job with shading on virtually every aspect. The addition of the shadowy hibiscus flowers in the background I think really adds a lot to inlay. The text on each chips is represented in the edge spot or the base chip depending on how we thought the colours look the best. In total I have ordered 550 chips, More than enough for a 6 or 8 man tourney and if I can ever get back to holding bigger tournaments I can mix the Dunes set in with these. 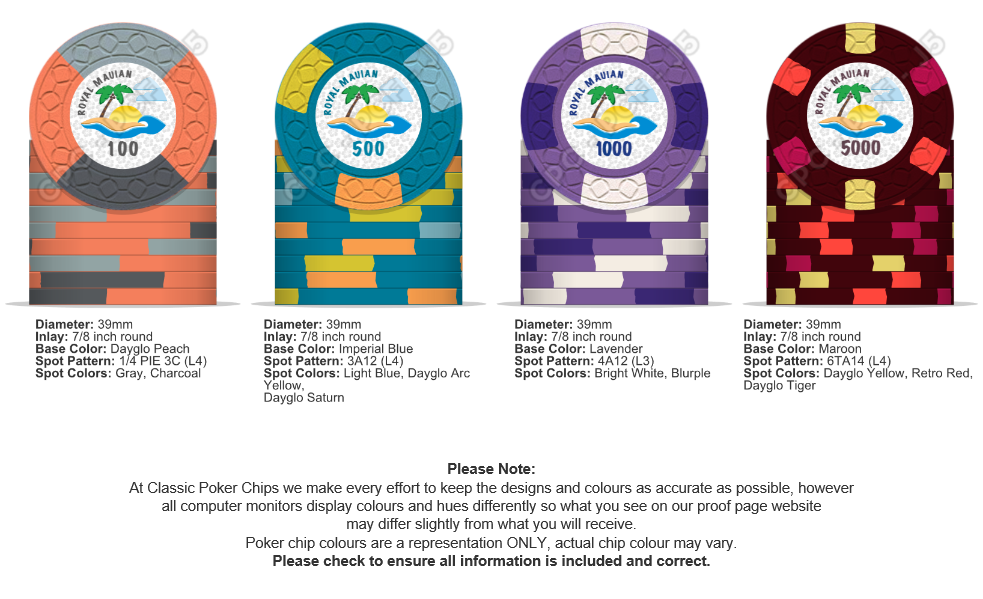 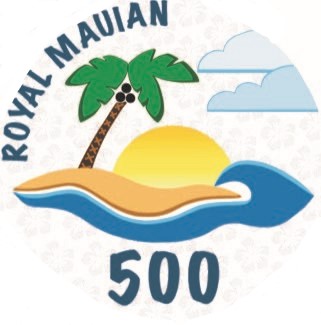 Congrats! Glad you stuck with that $5k, I LOVE that chip! Hope you ordered extras for samples

Love these! Very nicely done! And thank you for the kind words on my set.

GetUrShineBox said:
Congrats! Glad you stuck with that $5k, I LOVE that chip! Hope you ordered extras for samples
Click to expand...

Thanks and I think there will be about 15 samples available. I want to give the 6 usual suspects at my game a set and still have a few as potential give aways.

Congrats! Mock-ups look great. Looking forward to the full reveal once you have them in hand.

Great job with these! That hundo is my favorite.

Are you sure you don't want to order just 1 more denom? Five chips fit perfect in my sample display cases...LOL.

Those look awesome! In for a sample set if available.

Nice theme and colors. 550 chips with the right breakdown should be able to spread two 9player tables of T10K starting stacks...

GetUrShineBox said:
Congrats! Glad you stuck with that $5k, I LOVE that chip! Hope you ordered extras for samples
Click to expand...

same here, I love that 5k for some reason...

kmccormick100 said:
Nice theme and colors. 550 chips with the right breakdown should be able to spread two 9player tables of T10K starting stacks...
Click to expand...

Won't it be nice to bring that many people together. Hopefully soon.

Thanks. I wanted my 2 work horse chips to be my favorites.

cool inlay. Congrats!
You must log in or register to reply here.

Finally pulling the trigger on a CPC set
2 3 4

My first set of customs