Over the years, there have been many amazing custom tribute sets created by members of CT and PCF. One set in particular was a set I long lusted after, part of a very small group buy from the Chiptalk days—but it was a bit of a white whale, since only a couple of playable sets existed.

Everyone here knows the movie Rounders, and the iconic Teddy KGB "bear" chip set. Jim Blanchard at ASM (the forebear to CPC) designed the set for the movie and really hit it out of the park. It is legendary. It is almost simplistic in its design, but it achieves greatness because of that—the inlay and (particularly) the colors and spot patterns are a platonic ideal of what a chip set should be. A number of Teddy KGB tribute sets have been made over the years, including a spate of recent runs at CPC, all of which are gorgeous. But, in my humble opinion, they all have one fatal flaw: unless being used as tourney chips, the iconic and gorgeous $25, $100 and $500 chips featured in the movie will rarely (in the case of the $25s and hundos) and almost never (in the case of the $500s) see the felt. And when they do, they'd only be seen in minute quantities. Now where is the fun in that?

As I mentioned, back in 2007, a member of ChipTalk--jdunford--created a tribute GB set that perfectly captured the Rounders Teddy KGB theme and look of the chips. Back then, ASM rightly wouldn't let anyone use the actual Teddy KGB artwork to make a tribute set, and using the roman mold with the same colors/spots was also restricted. So he came up with a brilliant idea: a tribute set with the same colors and spot patterns as the real Teddy KGB chips, but with enough design changes to get ASM to make the set.

To begin with, instead of using a bear, jdunford came up with the idea to use a donkey (a perfect poker-themed animal, I'm sure you'll agree), and called the set the Donkey KGB set. By changing the animal artwork, he was able to use the same inlay design and typeface as the real Rounders set. And of course, since the Roman mold was off the table, what better chip mold for a donkey-themed set than the legendary (and some say, the best feeling) mold offered by ASM? Right! He used the DHR mold (that's "Donkey Head Right" for those of you following along, not to be confused with the lesser HHR mold ). And because the inlay and chip mold were sufficiently different from the Rounders original, ASM allowed him to use the same original chip colors and edgespots as the real Rounders set.

Now, here's where jdunford’s Donkey KGB set went from simply brilliant to absolutely sublime: Keeping with the donkey theme, and wanting to get the classic Rounders-colored chips in play regularly, he reasoned that donks play low-to-modest stakes. So, with a humorous wink, he used the same numerical denominations as the Rounders chips, but instead of dollars, he...wait for it...used cents! Thus—stay with me here—the $25 became 25¢, the $100 became 100¢, and the $500 became 500¢, etc. I know, right?!?

Now, you can see where this is going...the chips with the original Rounders colors/spots and denominations thus became perfect for a typical home game with 25¢/50¢ or even $1/2 stakes. With the Donkey KGB chips, you can splash around stacks like you’re Teddy KGB, all while playing 25¢/50¢ NLHE with your home game buddies! Yob tvoyu maht!

Now, as I mentioned, Jdunford’s GB only had a few participants. Maybe 3 playable sets existed, and all were pretty small. I missed the original group buy, and despite my best efforts over the years, none of the participants was willing to part with their sets. I gave up all hope of ever owning one. The largest set was owned by Michael Patton, a legendary vendor in the poker community responsible for a number of amazing BCC sets (e.g., Mardi Gras, Riverboats, Samurai Clubs, etc). Tragically, Michael died a couple of years ago. But while Michael's death was a heavy blow to our chipper community, it turned out that one of our very own, @Potsie1, was able to save Michael Patton's entire poker collection when it went on the block at an estate sale. When Potsie announced this on PCF back then, I watched with interest, thinking the Donkey KGB set might surface, but it didn't. And I again put it out of my mind. Until a few weeks ago, when I realized that Potsie might still have an intact set. So with bated breath I contacted Potsie, and bing-bang-boom I am now the proud owner of a set that has long eluded me: The Donkey KGBs. Hyperbole aside, they are the greatest Rounders tribute set ever created. And while Teddy KGB may "fyeeel zoh un-seeyatis-fide"...me? I’ll be at the table with stacks of high society, and a rack of Oreos. 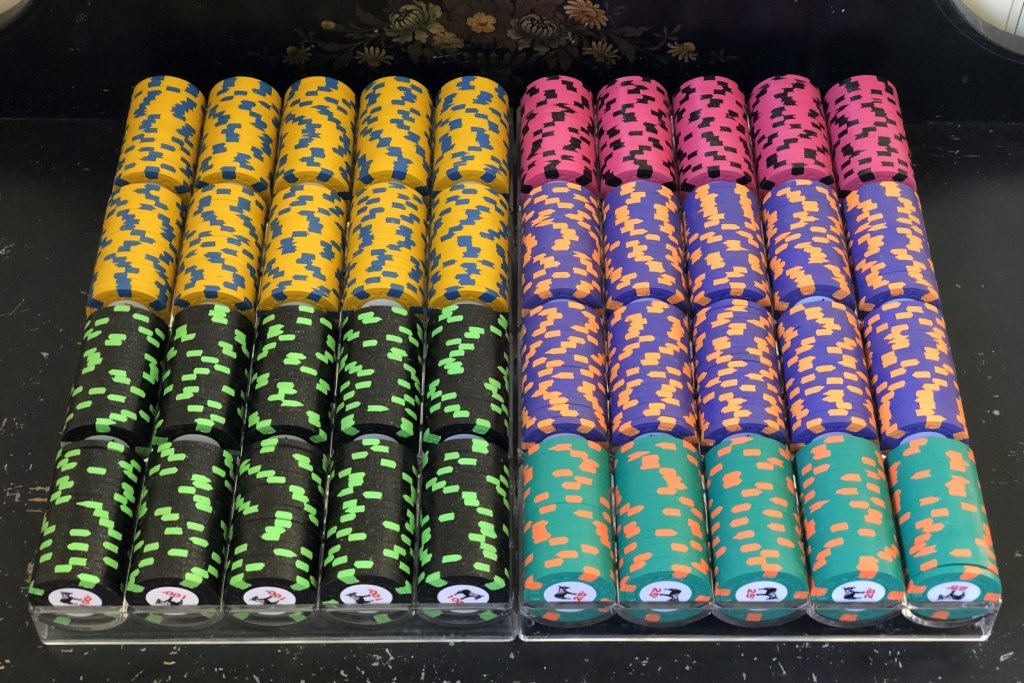 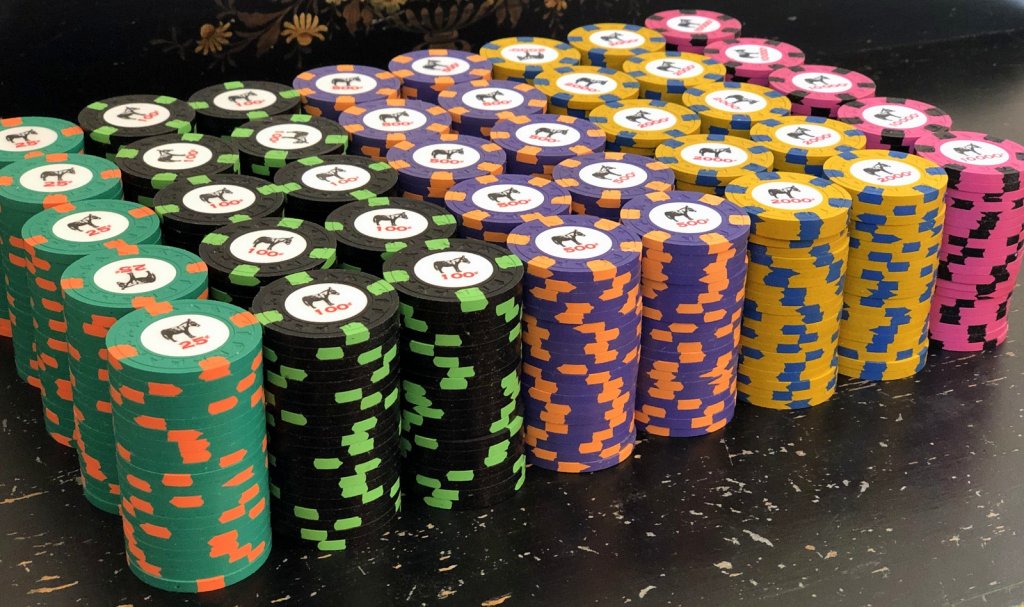 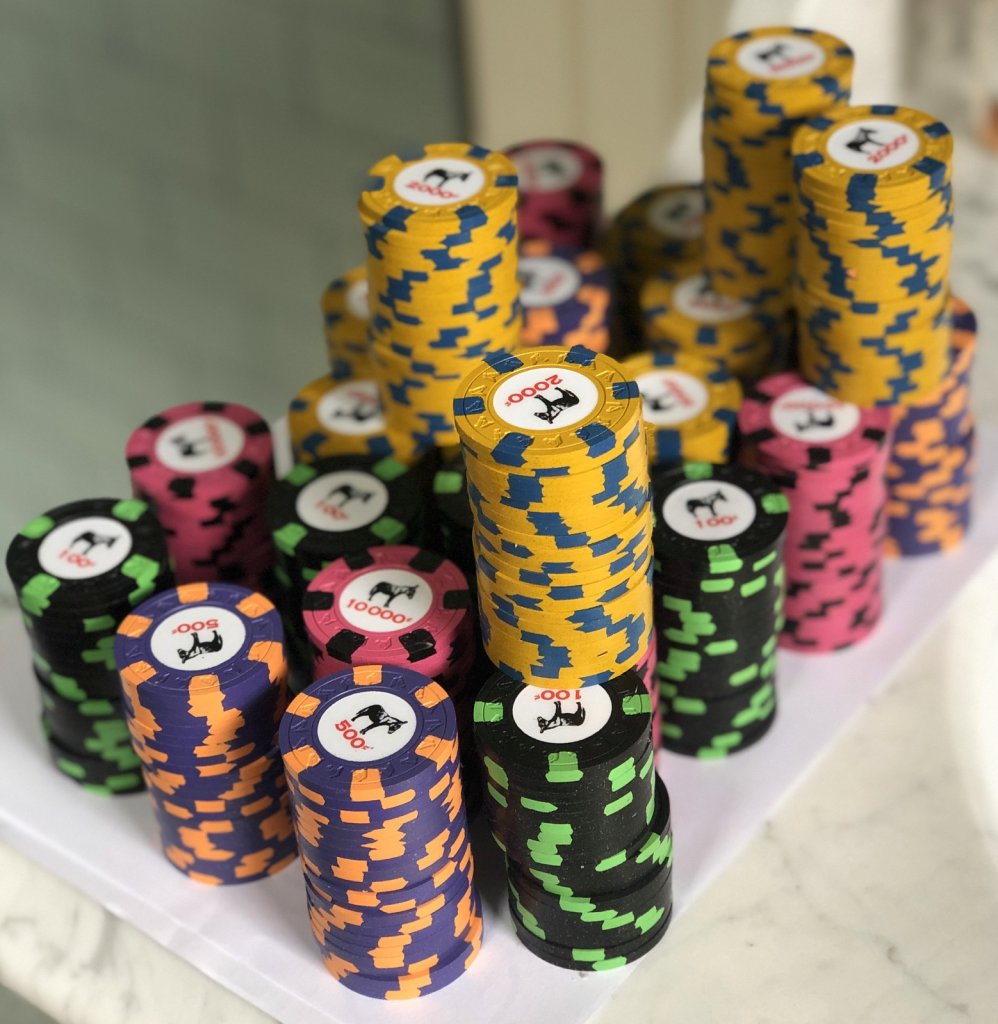 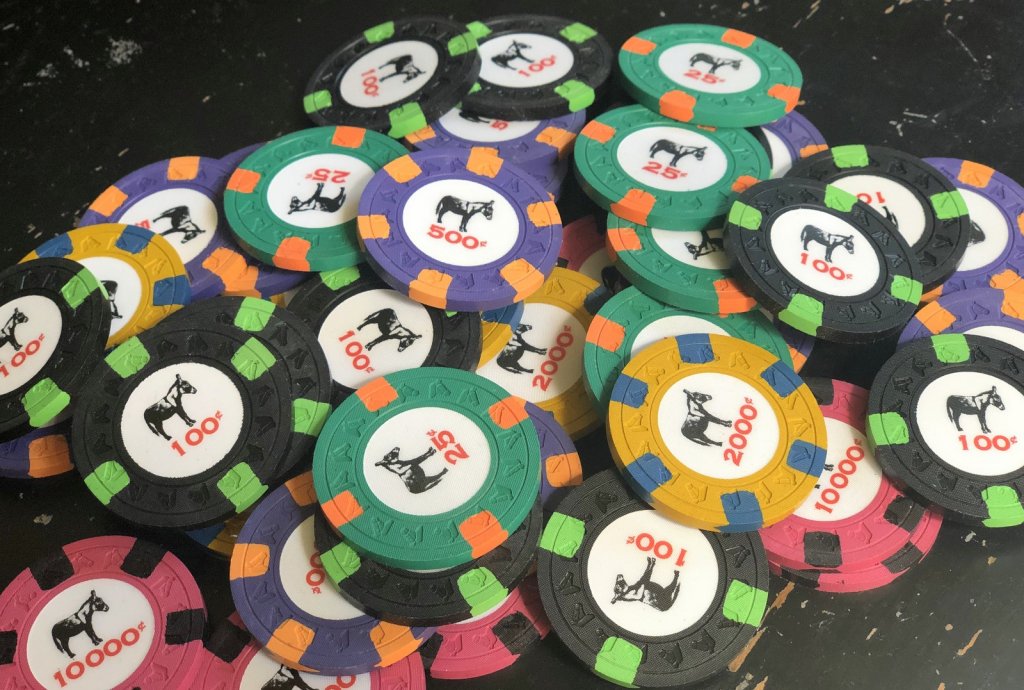 Is that the Saarinen marble-topped table I spy?

Taghkanic said:
Is that the Saarinen marble-topped table I spy?
Click to expand...

@gopherblue you are officially a scrub donkey. Congratulations on this epic set!

Love it! The is for sharing the history!

Congrats on a great acquisition! These really do go way back and I’m wicked happy you were able to find them.

Coyote said:
Could you please name the CPC colors used?
Click to expand...

These were exactly my guesses - and questions
I think the 2,000c is Canary with Blue.
Agreed, otherwise.

Total bank???? That makes a lot of sense, er cents!

Coyote said:
These were exactly my guesses - and questions
I think the 2,000c is Canary with Blue.
Agreed, otherwise.
Click to expand...

Pretty sure the 2000¢ is Yellow/Blue (Canary was not yet available). The other colors seem spot on to me as well.

pretty sure canary wasn't available in 2007?

I was wondering if anyone was going to notice this, after that word-wall I posted.

@Random Phish ...don’t you have something to share here too?

Glad you like 'em, @gopherblue. Michael once told me that was his favourite home cash set. Pretty sure you now have the second largest set, although mine doesn't have as much bank (couple racks of 5c, and mostly 25c-500c). I'll have to get a gallery going since Chiptalk is done.