Cash Game Does this seem like an appropriate chip stack for my home game? (1 Viewer)

I have a friend group who are all asking me to throw some more poker nights after my most recent one was a hit.

After this, I feel like I can expect anywhere from 6-12 people on a given night for the cash games we plan on playing. Given there's a large variety of disposable income differences, I'm planning on running our games as .25/.50 with a $20 buy in.

I have a few friends who would be interested in a "higher stakes" game for a $100 buy in. I want to make sure that the chip set I'm considering ordering in the follow quantities would be enough to cover the games I plan on having.

Let me know if there's a better stack sizing I should use for either game. I'm pretty set on having both .25 and .5 chips if you can suggest any stack sizing around that.

Also consider that in a cash game, people should bring multiple buy ins in case the bust out. You don't want two players busting out early in the night and another mid way through as it could leave you with a short handed game or break the game up early.

First, I'd suggest doing a .25/.25 game if you are doing $20 buy-ins. The configuration you have has players starting with only 40 BB, which is far too little for the game to play well, IMHO. Even the suggested 80 BB is somewhat low, but should be okay if these are newer players anyways.

Your $25 chips might see play in a big night of the $0.50/$1 game, though you'll probably only see a barrel on the table, at most. The $100s will likely never see the table with these chips, they are there for two reasons:
1. Chips are fun and having more varied chips is best.
2. Bank will NEVER run out of chips.

Playing 40bb deep is not call playing poker anymore, it will be more like Let's go all in and see who can Flip better

Either Consider playing at 100 bb meaning 25/50c stake with $50 buyin or drop the stake to 25c/25c if you want to keep the buyin at $20. Having 80bb preflop at least will allow more gameplay

Taking into the above 2 stakes under consideration.

A Full Table Chip set breakdown for 600 chips will be

You can also get 300 x $1 and 300 x $5 if you had a bigger budget as these 2 denominations will be your workhorse chips but the 600 chips will be more than enough for gameplay.

I worked all my Chipset around the basic of the 600 chip set, and an example will be as follow 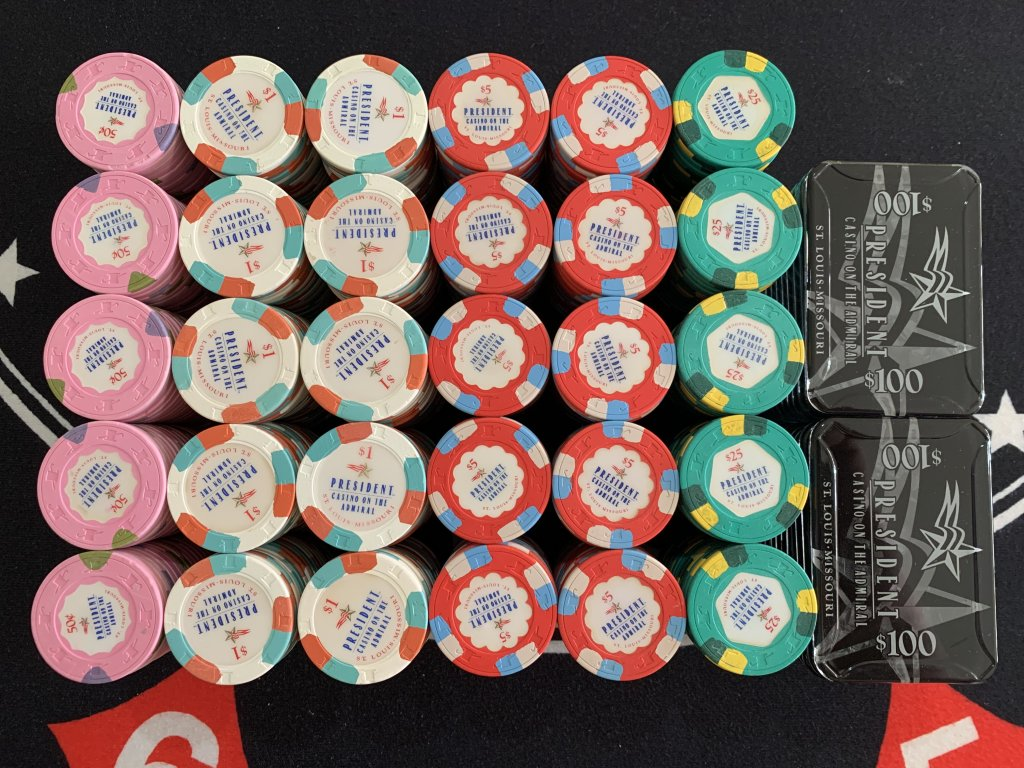 Also, do get some 100% plastic Jumbo index playing card too. And also at least a Poker Topper Mat. Both are good upgrade for a Nice Poker Game

This. I actually play a lot of games with family with $20-30 buy-ins. We ALWAYS play these games with nickel/dime blinds. $20 is WAY too short stacked for $0.25/0.50. If your goal is to have games where some of your more budget conscious friends can have fun too, then just lowering the buy-in will not do the trick. They will just be pushed around by the guys for which $20 is nothing. You have to lower the stakes to be appropriate for the buy-in with a minimum of 100 big blinds in the starting stacks. You might want to try dividing your players up into two groups based on what stakes they are most comfortable with, then hosting two different nights of poker for the two groups.

And I will second (third? fourth?) the suggestion to skip the 50 cent chips. I see you are brand new here. Before doing something you may regret later, spend some time here reading the many threads on stack sizing and chip distribution. There are many experts here to learn from. Some have been hosting games for decades. They are not just trying to yank your chain. They have learned through hundreds of games hosted what works and what doesn't.

Everything everyone has said here is excellent advice, so I won't repeat any of it.

Welcome to PCF! I hope you and your friends have some great fun at your poker nights.
S

Bear in mind that for cash games, there's no need for "starting stacks". It's fine if people buy in for different amounts, and it's fine if everyone starts with different denom breakdowns. For example, one person might buy in for $20 and get ten ones and two fives, while another person buys in for $50 and gets twenty quarters, fifteen ones, and six fives. Players will make change with each other to spread the small chips around, and if one person has more money in their stack than someone else, well, the whole point of playing poker for cash is that some people will end up with more money than other people.

You want to keep the buy-ins within a modest range, probably 50bb to 200bb, so that there's not extreme variations; a table where one person buys in for 50bb and someone else buys in for 500bb is going to suffer from mismatched bankroll problems. But within that modest range, it's fine if everyone decides for themselves how big they want their starting stack to be.

As as far as denom breakdown goes - instead of thinking in terms of starting stacks, think in terms of "average chip breakdown per player". It's effectively the same thing, but you don't have to try to target a particular chip total per player. This gives you a lot more flexibility and lets you consider a broad range of breakdowns. Common suggestions are 8 to 20 quarters per person and 20 dollars per person. A common strategy for "starting stacks" is to give each of the first five players a barrel of quarters (20 quarters), a barrel of ones, and as many fives as needed to complete each person's buy-in, whatever that might be. The next players just get ones and fives, without putting any more quarters on the table. This would make your total chipset for ten players: 100 quarters, 200 dollars, and enough fives to have a large enough bank support everyone's initial buy-ins plus all the rebuys for the rest of the night, which might be 100 to 300 fives depending on your game. Some people like having more quarters, some people like adding some 25s or even 100s; there's a lot of room for variation, people's preferences differ, and almost anything will work okay no matter what.


ChasePlaysPoker said:
I'm pretty set on having both .25 and .5 chips if you can suggest any stack sizing around that.
Click to expand...

You definitely don't need both, but you can certainly use both if you like. Using both will make placing bets more confusing, leading to errors; it will also make counting all-ins more time-consuming and error-prone. These aren't problems, but most people consider them annoyances and prefer to avoid them. But there's no rules that say you can't do it if that's your preference.

Thanks for all the feedback everyone.stack

While I was originally pretty hard set on the $0.50 chips, you've all convinced me to stick with the $0.25 only for my fracs.

The Feedback on the adjustable buy-ins was great as well. I'll start letting people know they can buy in for a larger number of big blinds.

Here's the stacks I'm planning based on some of the previous comments:

I think I'll go with a full barrel of 25c then since I like the idea of having more chips on the table!

ChasePlaysPoker said:
I think I'll go with a full barrel of 25c then since I like the idea of having more chips on the table!
Click to expand...

Also, this is a poker CHIP collecting site. So what CHIPS are you looking to buy???
You must log in or register to reply here.