This is a dealer button group buy that got its origins from a thread started by @kk405 here. The general idea is to create dealer buttons that have never been made before, or were made years ago, or are popular enough that they just needed to be run again. With an emphasis toward basing them on old casinos or epic chip sets (with the owner's permission, obviously). I have coined the term "PCFDBGB" to stand for "Poker Chip Forum Dealer Button Group Buy." Unless demand drops off, the plan is to run one of these every three months or so. This is the third DBGB, hence the "03" suffix.

There is already quite a long list of suggestions in the above mentioned thread, as well as the idea/suggestion box thread found here. A number of designers have contributed to this group buy, and many thanks go to them and the PCF members who commissioned the designs for allowing them to be available to the masses.

Below is the list of items that are available (items A thru Z). The order chart begins in post #2 of this thread - if you see an error with your order, let me know ASAP. Preliminary images of the dealer button designs are in post #3 of this thread. Please see the images below of the proofs from BR Pro Poker to preview what the items will look like.

If you wish to participate in this group buy, please place your order in the following manner:
A x 4
C x 2
H x 1

I will keep this order thread open thru the end of September, so you've got plenty of time to contemplate your order quantities. My current plan is to close this to new orders at midnight on Sunday, September 26, and begin collecting payments the following week via PM. The order will be placed with BR Pro Poker the following day. If all payments are collected promptly, the order should be paid in full by Friday, October 1, and it should be about 3 weeks until I receive the order. Then, give me some time to get everyone's orders packed up and shipped out. I am totally willing to ship internationally, but as we all know, there is a higher cost and a higher degree of risk with those shipments compared to CONUS shipping. I strongly suggest using a USA re-shipper just because small packages seem to take much longer than larger packages. I am totally willing to follow up with the USPS to try to track down slow domestic and international shipments, but once I give you your tracking number, there isn't much else I can do.

I - HOTEL MAPES (black - different design on each side) ... contributed by Johnny5

U - PRESIDENT CASINO NEW YORKER (white NYC bridges - different design on each side) ... contributed by Irish

X - STFU (47mm chip - different design on each side) ... contributed by BonScot and Marhault
NOTE THAT THESE ARE LARGER THAN THE ORIGINAL 39mm "STFU" CHIPS

Somebody have to create!!
I have one from Potsie1 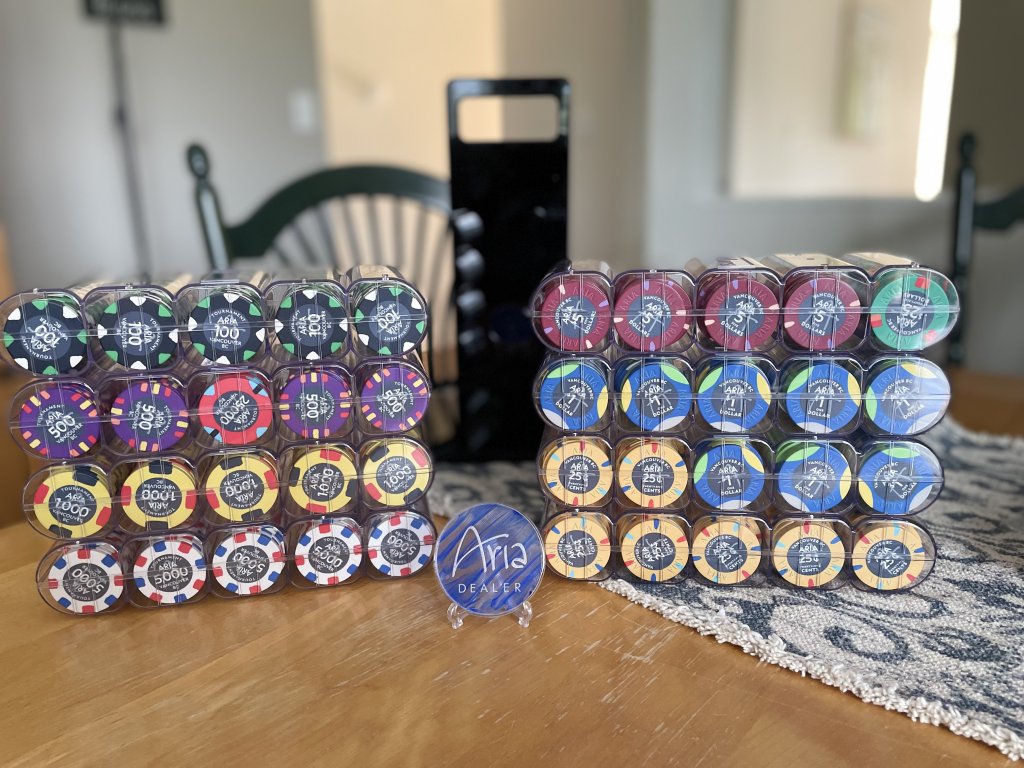 But I want some different

I never thought I would get into collecting dealer buttons, but the last two group buys have got me wanting moar! I"m in!

I am sure we'll need a couple of Park Place buttons, but with @p5woody out of the game, I am not sure where that leaves us?

We could ask Woody for the rights to do artwork for this?

None of this belongs in this thread, guys. The buttons for this group buy have been determined.

Please add your comments for future dealer buttons in the "Suggestion Box" thread.

How about pizza? Who likes pizza?

Sorry, I always get sucked into a derailed thread.....

Himewad said:
None of this belongs in this thread, guys. The buttons for this group buy have been determined.

Please add your comments for future dealer buttons in the "Suggestion Box" thread.
Click to expand...

OK - Thanks for your patience. I'm still waiting on a few items from one of the designers, but I have spoken with him recently about running his designs and it should be a formality at this point.

THIS THREAD IS NOW OPEN TO TAKE YOUR ORDERS!!!

If you wish to participate in this group buy, please place your order in the following manner:
A x 4
C x 2
H x 1

Thanks for organizing this buy!

Thanks for running another one!

Thanks for the GB
You must log in or register to reply here.