I’m headed to the CCA convention in Vegas for my first time, and was curious about other’s experiences there. Any tips / advice for a noob?

Brie and I are noobs as well Krish! Following along (the plan is to hide behind @AfterTheFact if the older gents get grumpy about us looking for more than a single chip at a time! Lmao)

Definitely bring a fake beard and a few different hats so you can buy from the same vendor a few times! Haha

A few of us have shared our "want list" so we can work together to try and find chips! I honestly have no idea what to expect other than quality time hanging out with chipping friends! If we are lucky enough to find a few treasures that would be a bonus! And we are now less than a month away!! Can't wait!

Get there right when the doors open at noon on Thursday...


so the rest of us can get a 2hr headstart

Seriously though, let people know what you're looking for and see what you can find for other members that they need, a lot of us have helped find things that somebody else might have missed, everybody wins. 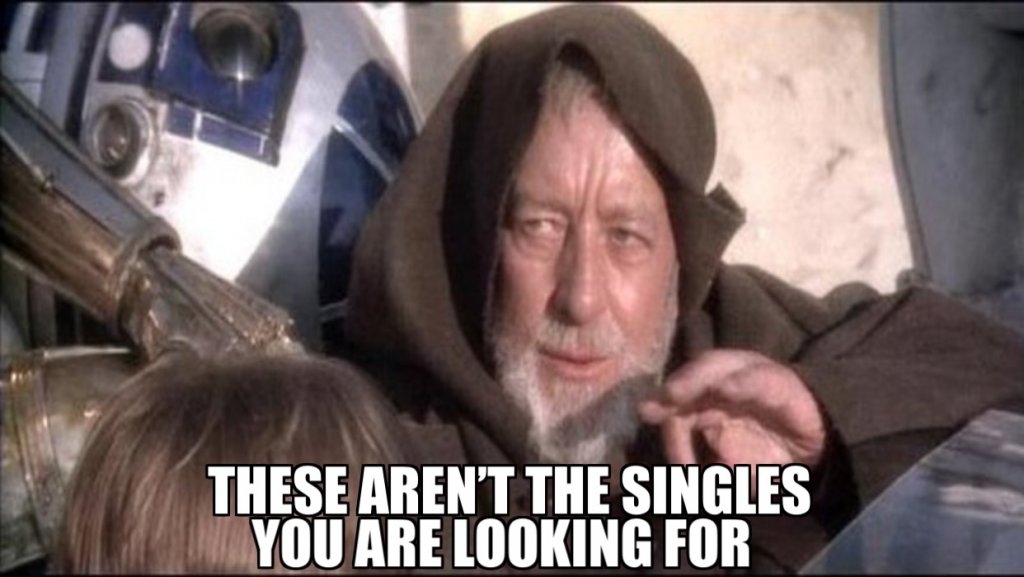 @Windwalker are you a CCTGCCFAXYZ member? If so you can get in at 9am on Thursday... otherwise you are stuck outside with me until 10 am because I am a huge procrastinator and should have joined before the dead line. I think most that are going are members though!

Ben8257 said:
@Windwalker are you a CCTGCCFAXYZ member? If so you can get in at 9am on Thursday... otherwise you are stuck outside with me until 10 am because I am a huge procrastinator and should have joined before the dead line. I think most that are going are members though!
Click to expand...

Yep, I got a membership a while ago. Was mostly curious about how it was set up. Different vendors have different booths, etc? Do they sell sets, or is it mostly singles?

I never joined, and showing up around 10a has always been fine, but I have some helpers that get in earlier too.......

Windwalker said:
Yep, I got a membership a while ago. Was mostly curious about how it was set up. Different vendors have different booths, etc? Do they sell sets, or is it mostly singles?
Click to expand...

Interesting, when is this happening?

I went two years ago. Super fun, if you like methodically searching through bins of thousands of chips. If you’re willing to look you can find some gems, in my opinion. Also it really helps to chat up the vendors — got a sweet deal on some vintage decks of Kem cards when I was there. 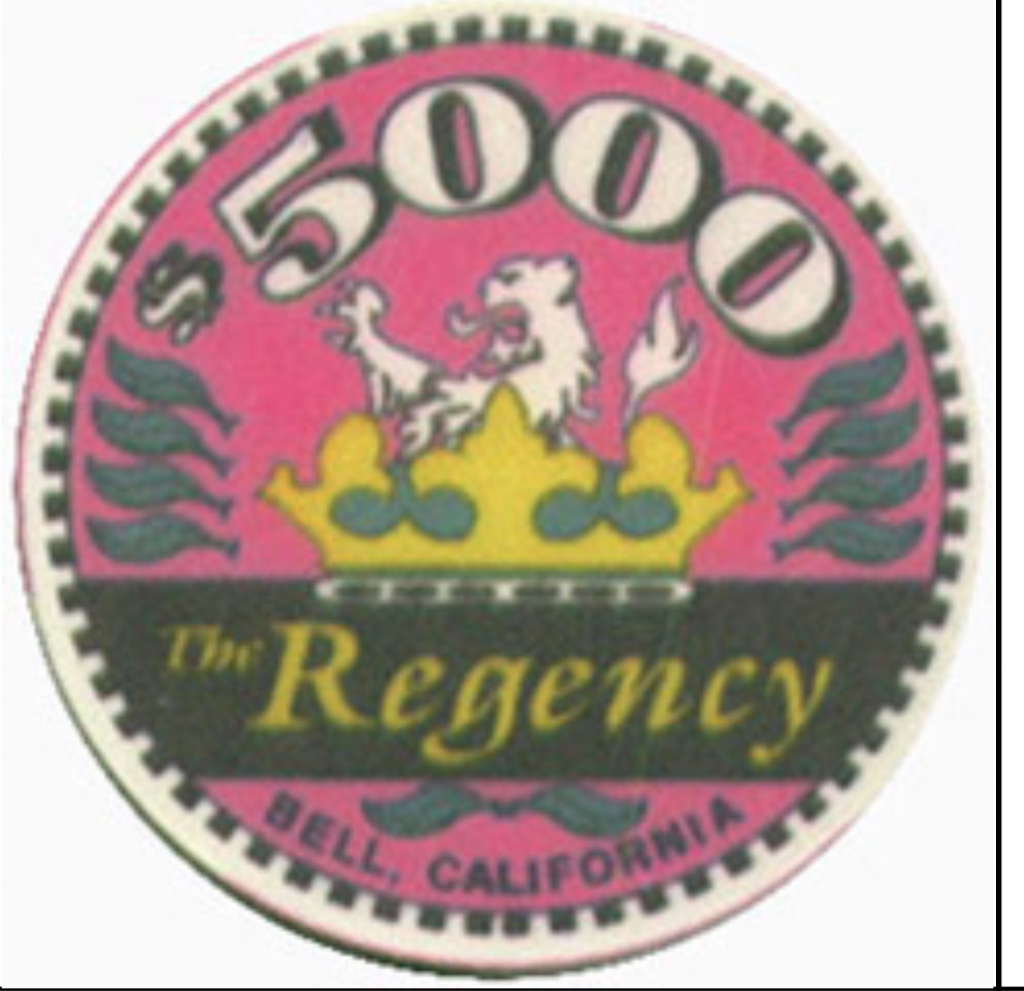 Organista1 said:
Interesting, when is this happening?
Click to expand...

Exactly one month! Well minus one day now! Lol 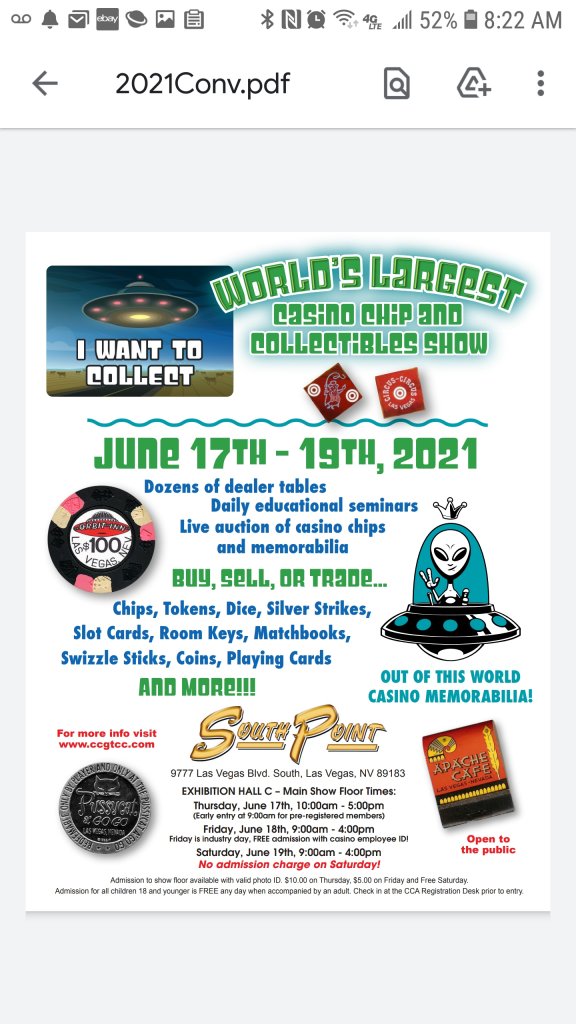 That artwork tells you exactly all you need to know about the average age of those in attendance. PCF will have a strong showing, but we still wont be able to bring the average age down by much.

Do the non-PCF attendees organize any poker games while they're there? Anyone ever play in one? What were the players like?

CrazyEddie said:
Do the non-PCF attendees organize any poker games while they're there? Anyone ever play in one? What were the players like?
Click to expand...

There is a private game for the CCGTCC members, dealt in the South Coast poker room. Have not played in it, since I'm not a CCGTCC member.
Last edited: May 20, 2021

Wish I could join.
Have fun!

Windwalker said:
I’m headed to the CCA convention in Vegas for my first time, and was curious about other’s experiences there. Any tips / advice for a noob?
Click to expand...

We went once, a number of years back. We went on the Saturday, so I suspect all the "good stuff" was gone, but this is what I witnessed.

It was tiny compared to most conventions I am familiar with (gaming and Sci-Fi cons). Imagine a Marriott conference room, the kind that has a divider opened up, so it covers 2 conference rooms. That is the approximate size (as I remember it).

There are tables set up around the perimeter and an "island" of tables in the middle. Each with vendors selling/trading/talking. Most of the vendors have chips in binders that you can page through. If you are window shopping, you can spend all day here - heck, you could spend 3 days here. There are a lot of single chips out there, and in this group, they have something from everywhere. There were also bowls of cheaper chips. I suspect this is where you could find some real treasures for a song. I considered building a limit mixed pink-chip set from these bowls. Maybe still will. Nobody take my idea...

The year we went, I was looking for a particular chip: an Imperial Palace chip. The IP wasn't gone long, but I needed it to fill out a particular collection. So I started at the first vendor and started hunting. Once he finished up with someone else, he asked me what I was looking for. When I told him, he was doubtful he had it, though he did check a couple of books. He then said "Bob or Jim" (I dont really remember the names) probably have one. So once I asked who Bob / Jim were, I headed over to one of their booths. Sure enough, he had the chip, in mint condition.

It cost the same as it would if I bought it on eBay, but I didn't have to pay shipping ,didn't have to worry about USPS, poor shipping technique, or waiting. If I was ever in need of one particular chip to fill out a rack, I would check with these guys first.

If you are interested in CPC customs, David had a booth, though with COVID I'm not sure if he is coming in from England this year. It was a true pleasure to talk to him and to have met Jim Blanchard, the legend behind ASM Maine that eventually became CPC. These guys can teach you more about what makes a good poker chip from a technical point of view, than you ever dreamed. I spent a lot of time here.

In addition to chips, there were a few other vendors with miscellaneous casino-labeled items. Brilliant if you are theming a room. There were also chip-related items. I picked up a box of those plastic coin cases that you can drop a single chip in. I like these for card cappers, because nobody mistakes a chip in a protector for a chip in play. It is worth the time to browse those wares, to see what you never needed... until you saw it.
Last edited: May 20, 2021

Define "decent".
You must log in or register to reply here.

Plexiglass Dividers Coming Down In Vegas