I have been approached by the owner of an 18xx board game to make a general purpose set for gamers.
For this project to move ahead I need at least 30,000 chips to be sold. Pricing will be $.35 each.
The chips will be 39mm. For board gamers a grey 20 and 2000 chips are required. So this can crossover for poker sets I can add .25, 25, and 1000 chips.
Here are some early concepts. Spot patterns and center art are not locked in yet so some changes will happen as needed.
If you are interested let me know. Please post information to generate interest in board gamers forums if you can. 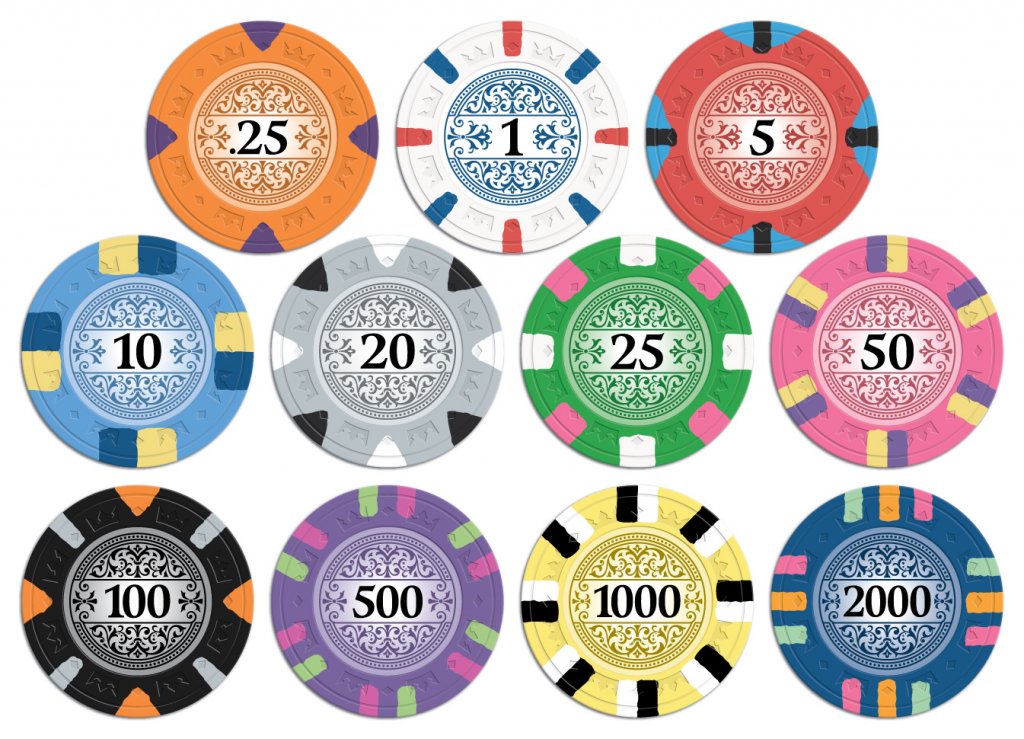 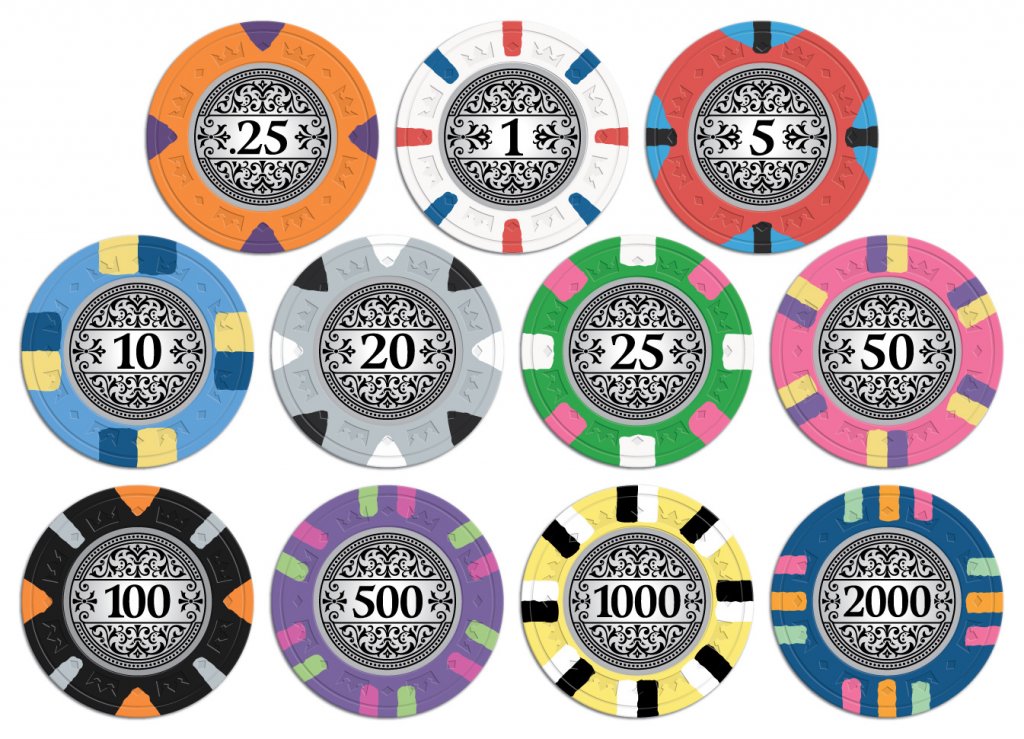 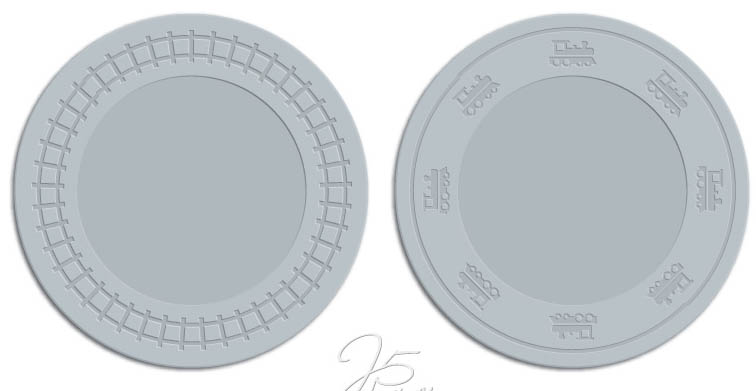 I heard that @BGinGA approves of grey $20s too
R

I would be interested except that I have a large pre-order of royals. Maybe next year, although I would prefer an 18xx theme to the generic theme. And I have at least a slight preference for ceramic. But I like them and plan to get a board game set one of these days.

To some of us board gamers, a green 20 is preferable. Please consider releasing the files of the inlays so that we could print and label as we desire. Even better would, of course, be a matching green and grey for edge spot patterns.

I just registered to be able to put in my interest.
R

While gray isn't my first choice for a 20, green would be my last choice. Myself and any friends that play poker would constantly be confusing them with 25s. Especially when they sit between red 5s and black 100s.

I’d prefer the 1st inlay, ideally with lightened ornaments and more saturated denominations, but do hope for better versions down the road. Royals improved significantly

Josh, you may want to add a 25 chip, to entice more buyers to use in poker sets. Great looking first design!

Bring that hot pink color over for a frac and I could be arm twisted to get another unneccessary set. Would blanks be available as well

Will blanks and labels be available separately? I want a yellow 20.
B

I made an account just to comment here (got linked from Boardgamegeek, so your request to be spread to other forums is working).

I'm not too sure about those edge spots; the colors seem to clash a bit and the spots might take up a bit too much of the sides of the chips, making it harder to identify chips in a stack ("is that a blue chip with black and red spots or a red chip with black and blue spots?")

Maybe a bit of "progression" in the edge spot colors - some gray on the 5s, some purple on the 100s, et cetera.

I do like the label matching the chip color in the top version.

Following with interest, I've long considered picking up a set of chips specifically for board games. Not an 18xx player though, pretty open to whatever colors the community wants most.

As someone who has recently taken up 18xx in addition to a long time poker addiction, I love this idea! I do have some opinions:

- On the inlay, personally I think you absolutely nailed the design for the intended purpose, and I strongly prefer the gray as opposed to the color coordinated ones.

- The 1 and the 5 share two similar colors. Since these are inspired by 18xx, it would be good to incorporate the tile colors into a common chip. Therefore, I would propose changing to brown & green edgespots for the 1.

- While I do really like the red the way it is, I don't like using black in three consecutive denominations. I wonder how it would look if you changed it to yellow (for the other tile color not used above)? Or maybe even better, maybe just the yellow half moons with no middle colors? Sometimes less is more, and it will resemble the 18xx offboard locations.

- The 20 I like as is, thought I might swap the edgespot pattern with the 1000. The colors are basic and that makes sense for the workhorse chip. I still personally prefer using 25s in 18xx, so I would add a 25 as Joepro suggested above.

- The colors on the 100 are way too typical. I would like to see it with coordinated edgespots that keeps a darker theme for the whole chip, like a deep gold and a bronze? Not sure what your color options are.

- For the 500, I would change the green to white. This would be another typical combo, but I feel it would flow well with my previous suggestions.

- The 2000 is a completely unnecessary denomination when you already have 1000, but I guess users would generally choose one or the other. Anyway for the highest denom chip, I'd go back to the edgespot from the 1 chip, and I think it would work better with the edgespot colors from the Majestic set, or even with white instead of black, as the black and gray mimic the 20 too much.

I think generally speaking, I agree with Bassofthe regarding the edgespots colors. Since board games are likely to require a smaller chip stack per player than poker at any given moment, it would be better to coordinate the edgespot colors within each chip as much as possible to be able to easily differentiate denominations with singleton chips and small stacks.

*Edit* Here are the colors I am roughly thinking, though the edge spots aren't right in the tool I was using, would love to see them mocked up for real with your tool & inlay with the correct edgespots:

A third label design option -- color-matched, but with a common bold contrasting color for all denominations -- might be a viable choice.

The resulting chips are more easily distinguishable, yet have a common trait tying them all together.
R

Are these Majestic blanks? Sure looks like it from the alternating crown-diamond edge decoration. I too prefer the matching-color inlays of the first sample set.

I like the slightly chalky and not-slick feel of the Dunes, I hope these have that. That's one of the things I don't like about the Roxley chips, they're too slick when rubbed against each other.

raynmanas said:
- The 2000 is a completely unnecessary denomination when you already have 1000, but I guess users would generally choose one or the other. Anyway for the highest denom chip, I'd go back to the edgespot from the 1 chip, and I think it would work better with the edgespot colors from the Majestic set, as the black and gray mimic the 20 too much.
Click to expand...

randian said:
Are these Majestic blanks? Sure looks like it from the alternating crown-diamond edge decoration. I too prefer the matching-color inlays of the first sample set.
Click to expand...

This is a design for a 39mm chip like the Majestic, currently using the edge spot designs of Apaches new 42mm Royal chip line, but with the denominations moved about a bit (the purple is new compared to the Royals).
R

Redouble said:
While gray isn't my first choice for a 20, green would be my last choice. Myself and any friends that play poker would constantly be confusing them with 25s. Especially when they sit between red 5s and black 100s.
Click to expand...

The Dunes set (which seems to be the only denominated set Apache has with a 20) has a green 20. Its entire color scheme likely predates the "modern" one, since its 1/5/20/100/500 are blue/red/geen/black/white, rather than white/red/grey/black/purple like this set.
R

StormCrow said:
This is a design for a 39mm chip like the Majestic, currently using the edge spot designs of Apaches new 42mm Royal chip line, but with the denominations moved about a bit (the purple is new compared to the Royals).
Click to expand...

randian said:
The Dunes set (which seems to be the only denominated set Apache has with a 20) has a green 20. Its entire color scheme likely predates the "modern" one, since its 1/5/20/100/500 are blue/red/geen/black/white, rather than white/red/grey/black/purple like this set.
Click to expand...

That lime green is what pushed me away from getting a set of Dunes. I did take some inspiration from them when I ordered my Majestics though, I built my set with a blue $1 and then a yellow $20.

This artwork design would look great on any set... i.e Royal blanks come to mind.
M

I would be in for at least 300 chips. I like the gray 20, but would prefer more progressive edge spots and the option of unlabeled.
T

Thank you, Apache, for considering this project and reaching out for comments and suggestions.

I registered to participate in this discussion.

I'd prefer less and more muted edge spots. I like edge spots that coordinate well with the base color. I'm not completely satisfied with the edge spots for the purple and pink chips.

I prefer yellow for twenty. I could live with gray as twenty. I have a cheap set of minis for which white is not an option. So I use gray for ones in that set. I like the lighter blue for tens so the base color is easily distinguishable from the blacks. Again, I have some cheap chips where the blues and the blacks are hard to tell apart. So I'm kind of gun shy on that.

If I wasn't concerned about cost, I might order a custom set similar to this:

My wife and I play a game with with ones, fives, tens and fifties in white, red, blue and green. This set preserves that. The other colors extend the set for 18xx.
T

In my post above the comment "I'm not completely satisfied with the edge spots for the purple and pink chips." applies to the image of custom chips in my post rather than the proposed set by Apache.

I think there is a lot of demand for a nice set of chips for board games that don't look like casino chips as almost all chips are made with casino or gambling themes. I think 30,000 chips is a pretty low hurdle for a project like this as that corresponds to only 100 sets of 300 chips each.

I like the trend I've seen toward blue 1's; like the CPI set that Apache sells. I think they're quite sharp looking. Regardless, count me in for a 400 set and I'll likely add the 25's and 1000's to make my set universal for poker as well. Grey 20's work for me; I'd prefer not to see green anywhere but the add-on 25's. I'm in the camp of progressive edge spots. As for the inlay, I agree with the person above who said color matched inlays but with all having the same, dark color for the printed number.
O

This is awesome news, posting it to other trainheads as we speak.

As far as design, as long as blue, black, and purple are easily distinguished in not great light, they will rock. This is a big complaint with a lot of cheaper chip options in board games
You must log in or register to reply here.

O
Denominational density in board games and poker