I decided to upgrade my Barrington 10 Player Poker Table due to the fact that the cupholders couldn't hold my Yeti tumbler. I didn't capture pictures at the start but started capturing midway and wanted to post my process in case others had the same idea or wanted to try their hand.

These two posts gave me the confidence to try this:

Started off with this Barrington Poker Table. Found one on OfferUp for $185:
Barrington Collection 10 Player Poker Table with Padded Rails and Cup Holders 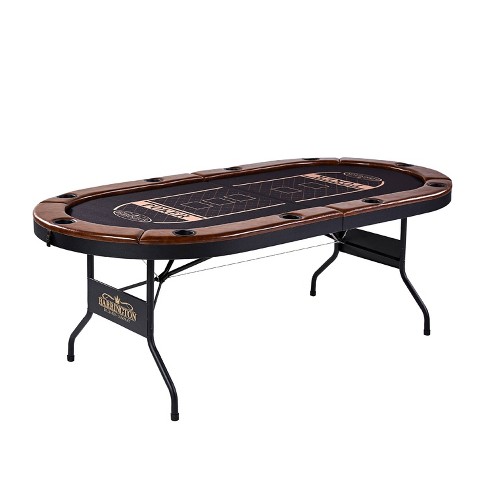 In this upgrade I repainted the rails, changed the cupholders, and changed the cloth. The full upgrade took about 4 days. The materials I used to do this are below (not referral links):

Prep Step #1
I do not have pictures of repainting the rails but that process was very interesting. I first attempted to disassemble the table by removing the stability wire, hinges, and each of the rails (by unscrewing them from the underside of the table) but quickly realized that even after removing the screws, the rails were held in place by the original cupholders that were superglued to the table.

I took a risk here and used vice grips to rip the cupholders off. When doing this I accidentally ripped the faux leather in two places on the rails (about a 4" inch rip) when I clamped them in the vice grip without realizing it. So if you follow this process be very careful when pulling the old cupholders out. This was the result: 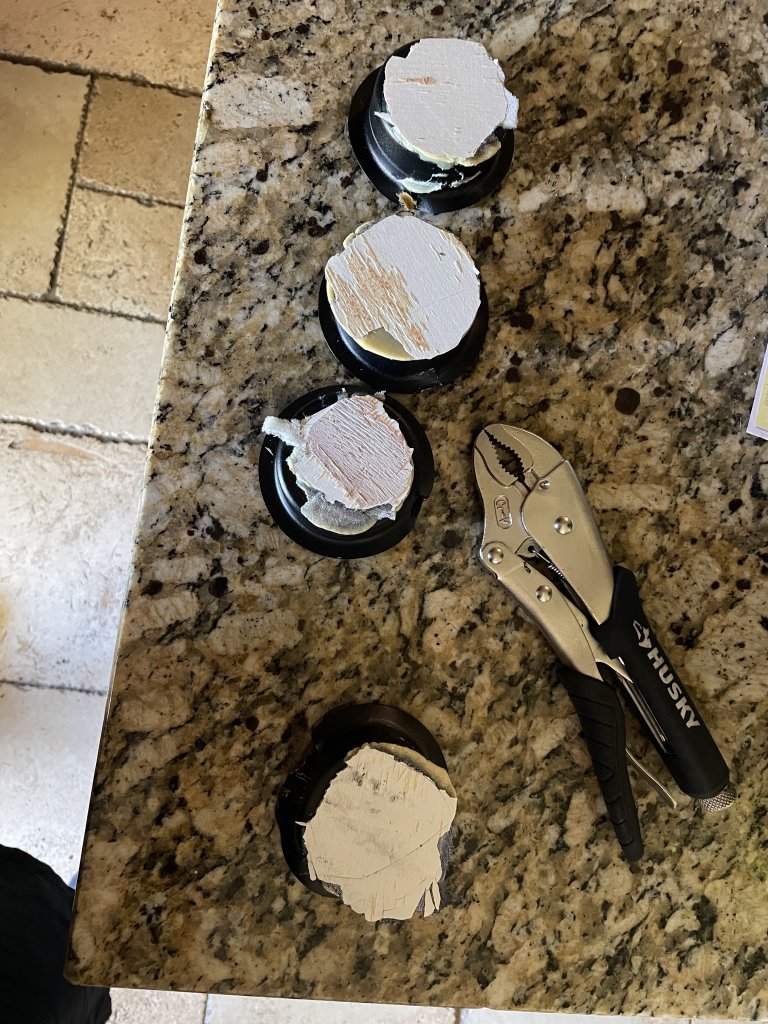 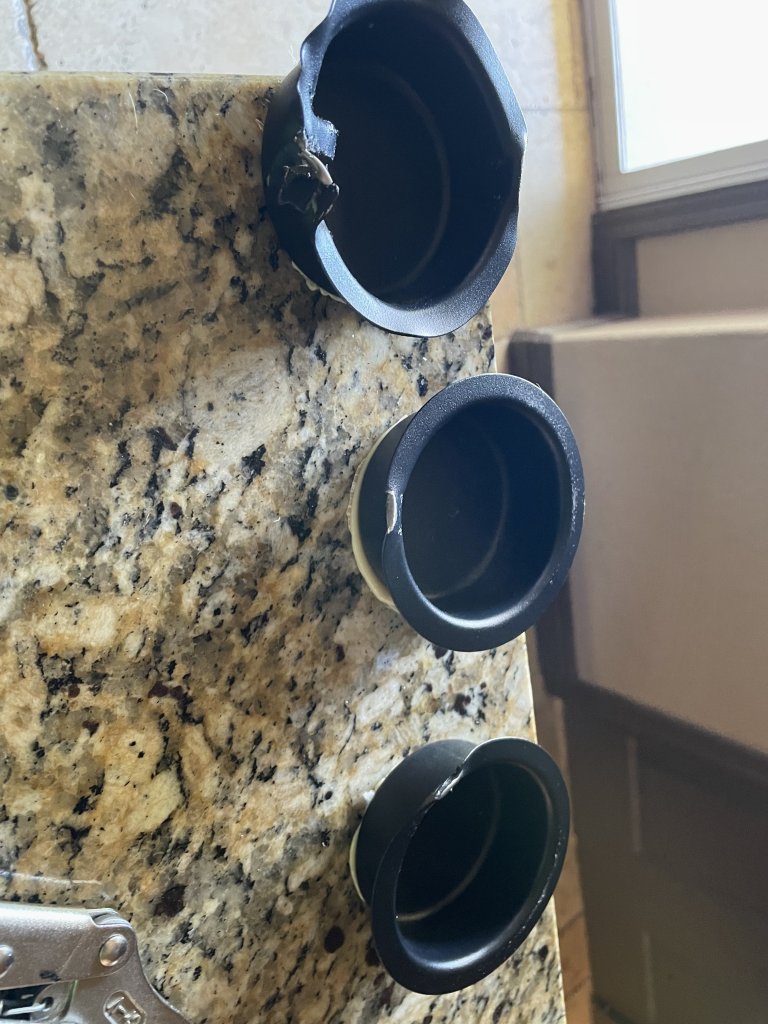 Painting Step #1
After removing the original cupholders, I was able to fully remove the rails. I cleaned them using the Angelus Easy Cleaner and painted them with the black Angelus Acrylic Paint. I'm not a skilled painter and I did notice that the acrylic paint had trouble adhering to the foax leather finish. I probably should have used a leather prep deglazer here. However, the sponge brushes worked beautifully and I just continued to rub the paint in until it stuck. A hair dryer or heat gun would have probably worked well here also. I let that dry for an hour or so, came back, and did a second coat.

Painting Step #2
I let the paint dry overnight. It had a matte look so I applied one coat of Angelus Leather Paint Finisher to give it a nice gloss. After doing this, I moved the rails off to the side to dry.

Upgrade Step #1 - Preparing the new cloth
The first thing I did after painting was remove the original Barrington table cloth. I then took a pair of scissors and cut the Yuanhe Poker Table Speed Cloth along the halfway fold. I didn't worry about measuring anything at this point because each half of the speed cloth was long and wide enough to easily cover each of the table halves.

Upgrade Step #2 - Aligning the new cloth
Once I had the speed cloth cut in half, I aligned the suited pattern with the inside edge (the edge where the two halves of the table meet) of the table while giving 5-6 inches of slack to wrap underneath and staple later. I used the staple gun here to hold my alignment in place while I repeated this step for the other half of the table. Using four staples to do it this way allowed me to match the pattern up on both sides easier without going back and forth.

Upgrade Step #3 - Fully installing the new cloth
Once both halves of the new cloth were aligned, I used an clothing iron on low heat to remove creases in the cloth (from being folded in packaging). Once this was done, I lifted the cloth and sprayed some Gorilla Heavy Duty Spray Adhesive on the original Barrington underlying padding. I then slowly laid the cloth down pulling it tightly to minimize bubbles and wrinkles and used a dry rag to help press the cloth into the padding. Once this was done, I used the Arrow Staple Gun while pulling to staple it securely in place along the edges. Finally, after doing this, I used the hobby knife to cleanly cut the cloth to shape along the edge of the table.

Upgrade Step #4 - Reinstalling the rails.
After the new cloth was installed, I carefully installed the rails again. I used a drill put the original screws back in place (from the underside of the table) to help me properly align the rails (using the existing holes on the protruding screws on the top side of the table). This was the result: 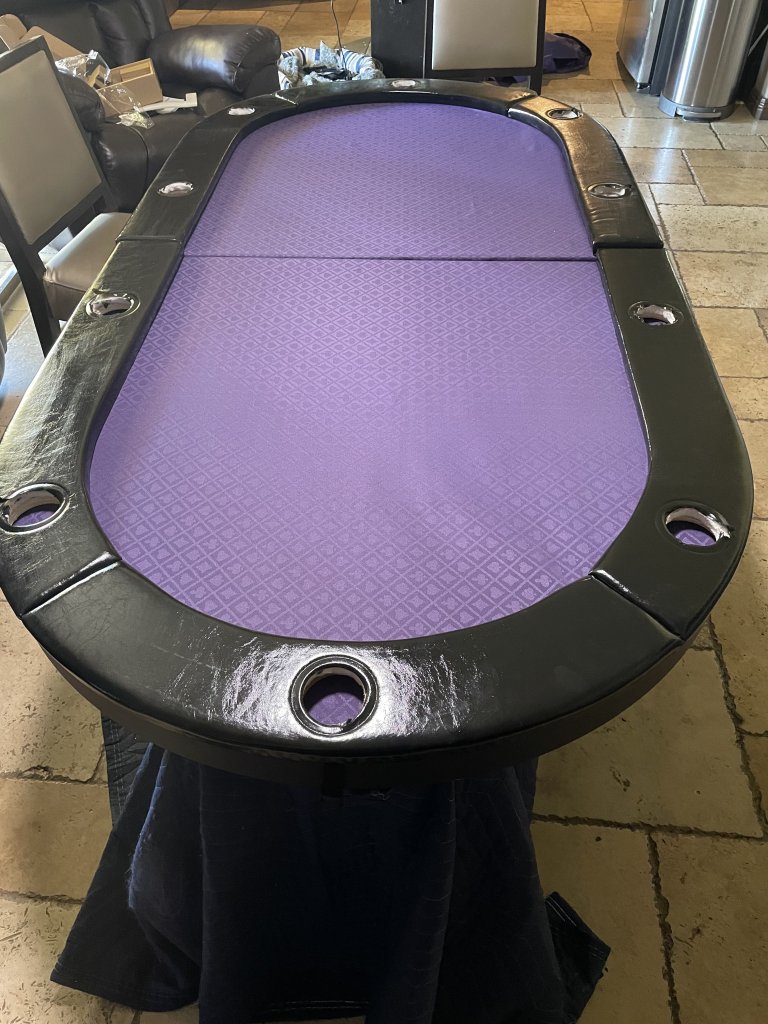 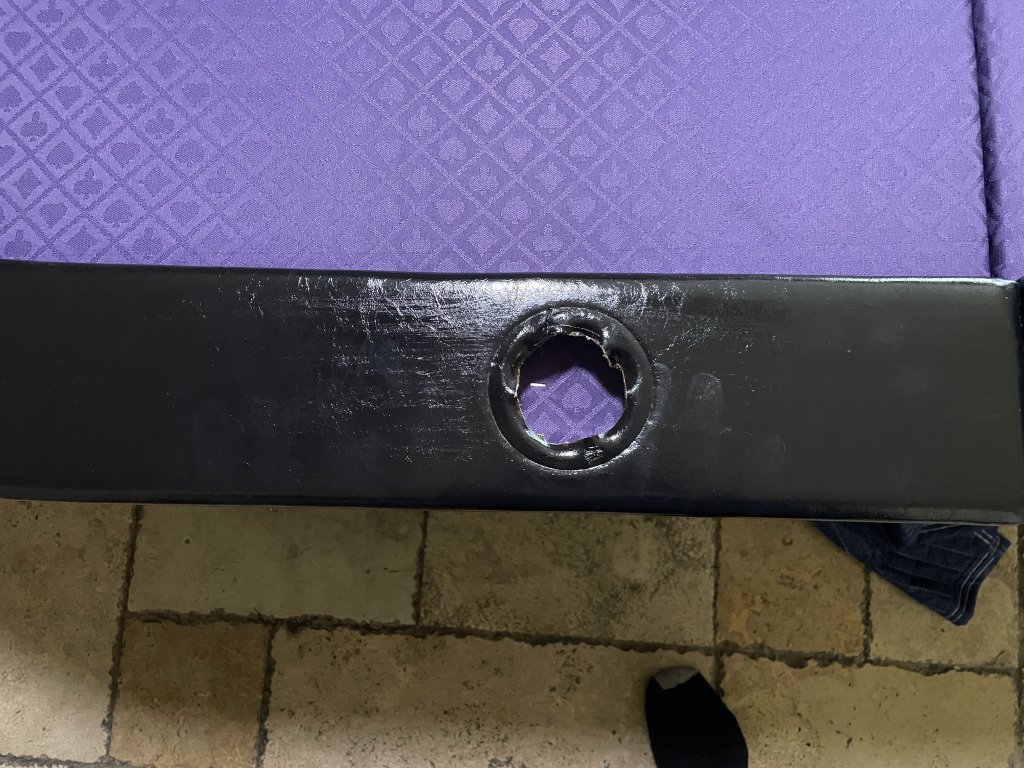 Upgrade Step #5 - Prepping the rails for the new cupholders
The new cupholders were 3.5 inches in diameter. Once all the rails were re-installed, I took a pair of scissors and cut half inch slits in eight places around in the inside of the faux leather rings where the original cupholders were. This was done to widen the circle in an even manner and allow space for the hole saw to get through. I used a hobby knife to cut the the same amount of underlying foam out.

If you take this approach make sure you cut out the foam in advance and don't use the hole saw to do this like I did on one attempt. On one of the holes I did not do this and the hole saw ripped the foam and almost ruined the uniformity of the underlying area! 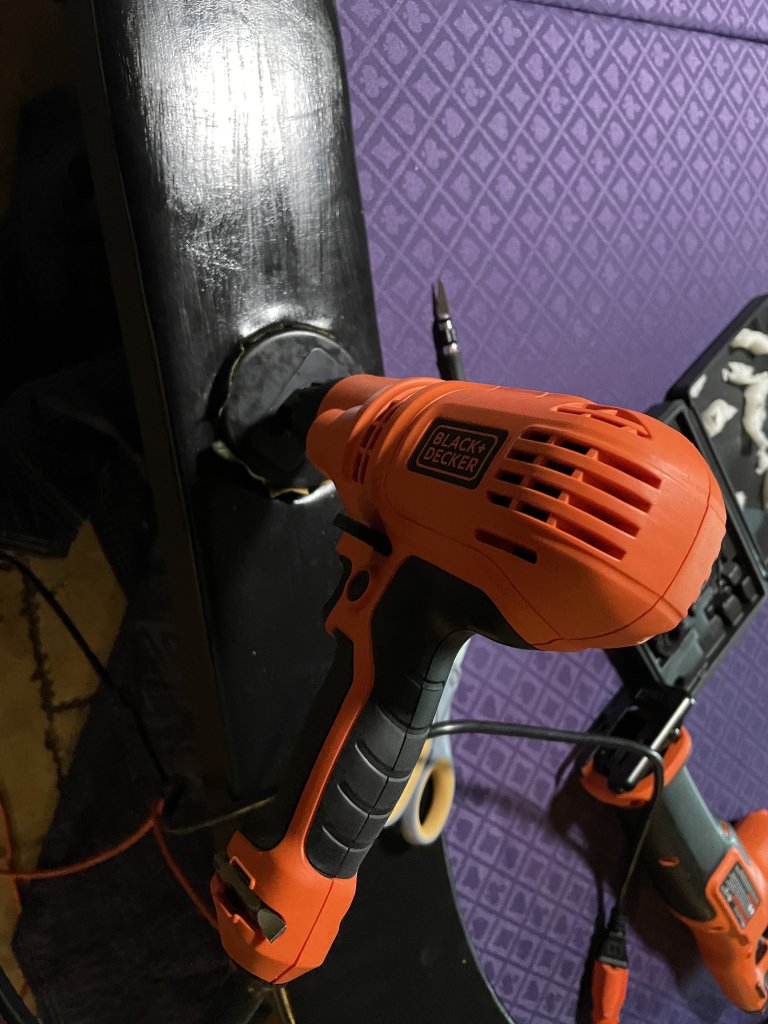 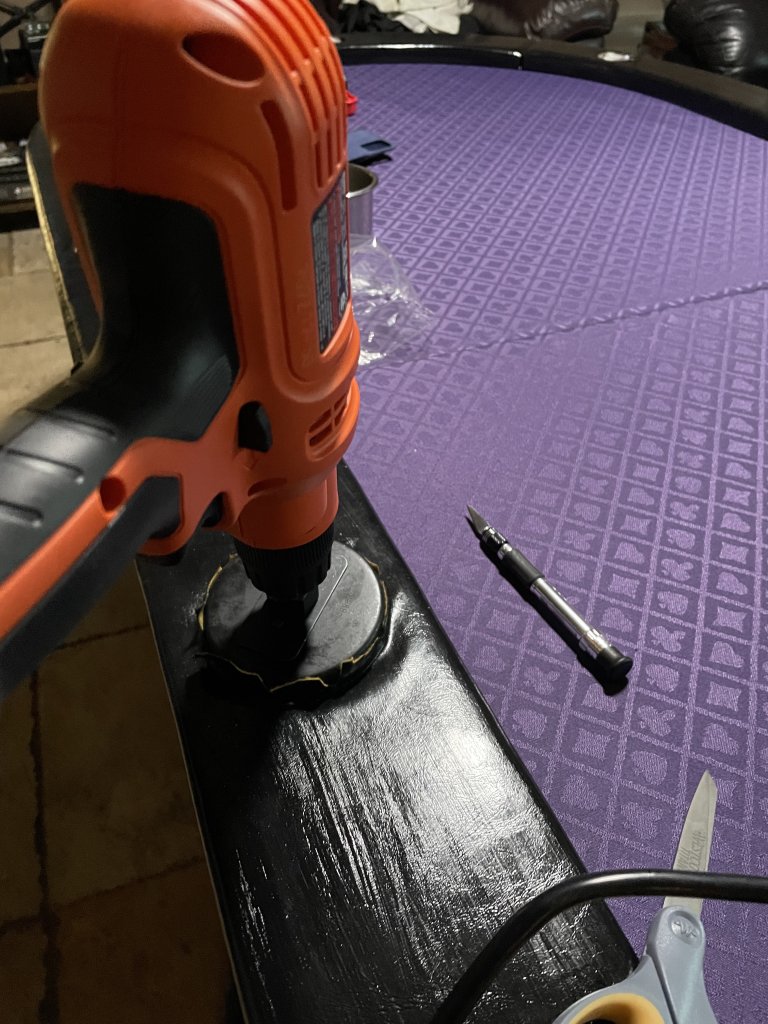 Upgrade Step #6 - Cutting holes for the new cupholders
The hole saw was pretty fun to use. I did this by myself and it was pretty difficult because I didn't have another person to apply leverage on the other side of the table! I ended up using my 1000 poker chip case to properly weigh down and counterbalance it haha.

If you take this approach, make sure to stop cutting once you get through the rail and remove the excess wood from the saw and then continue on. Because there are two layers of wood, the rail and the actual table, if you don't remove the cutout from the rail it will make it very difficult to continue and cut out the hole from the table!

Also, I wasn't really thinking all the way through and wish I did this outside! The saw dust made a huge mess and dusted up the couches and floor! This made for a big cleanup after. 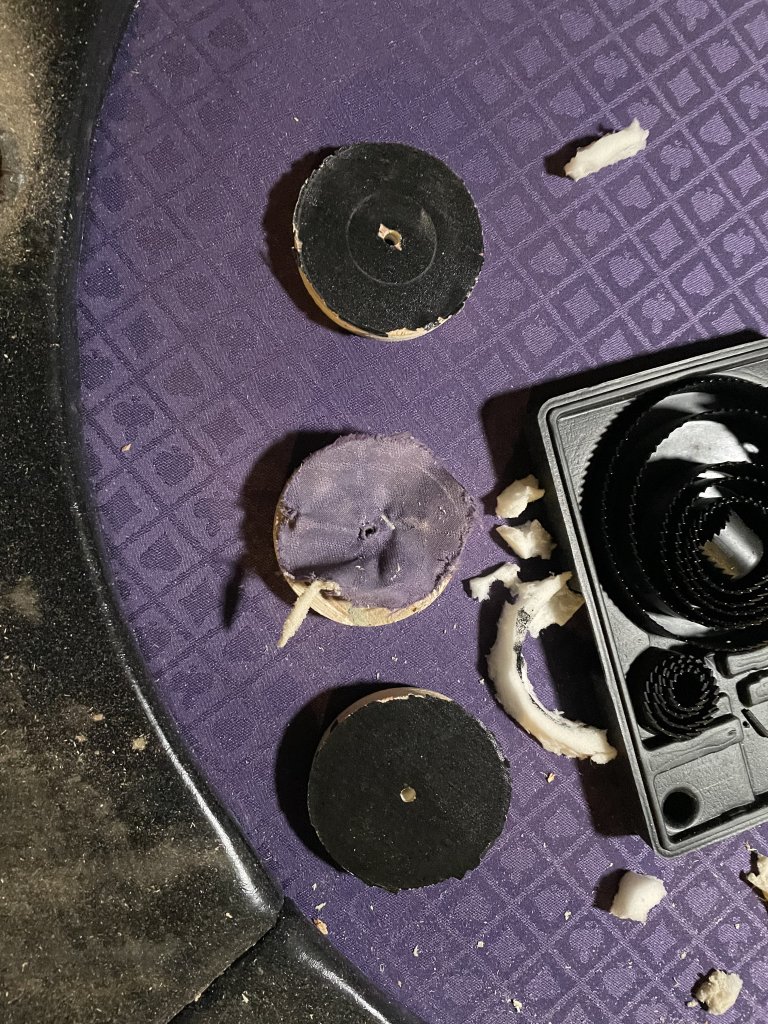 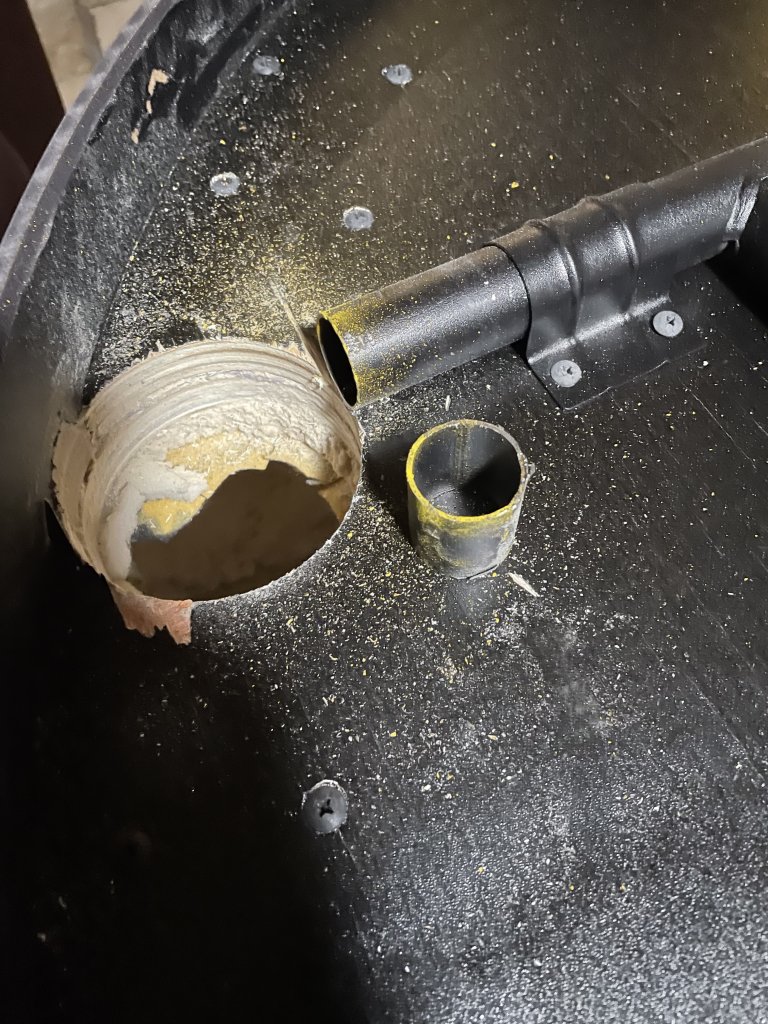 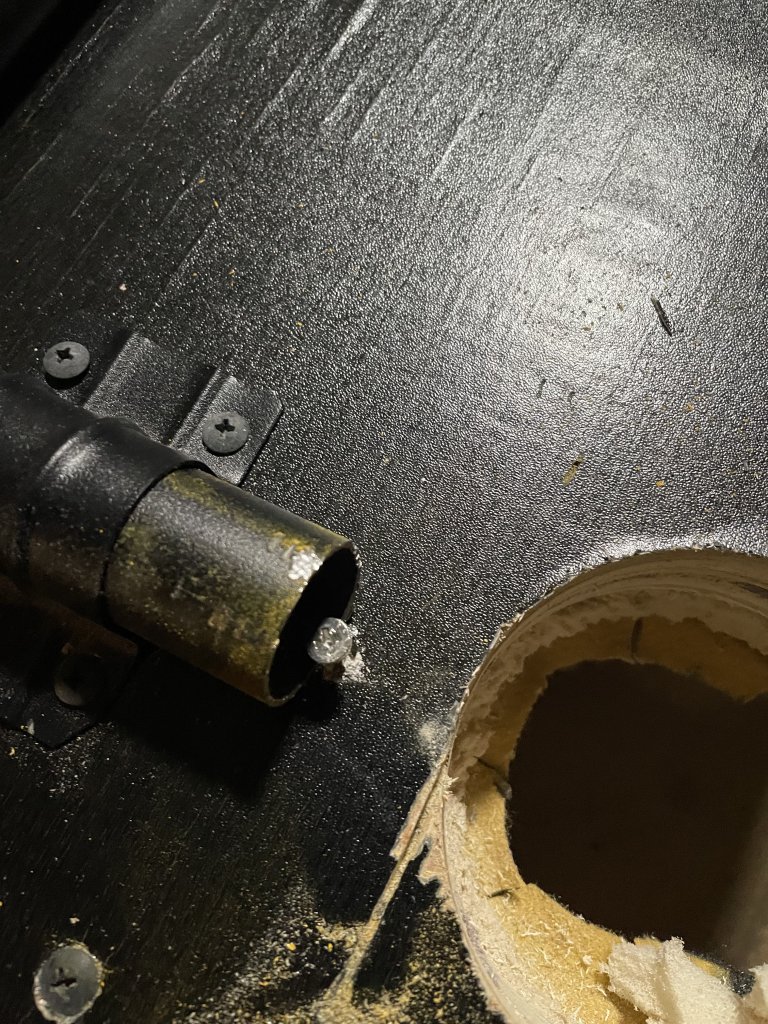 Upgrade Step #7 - Installing the new cupholders
When cutting the hole for the new cupholders, because the hole was the exact size of the cupholders it was very difficult to place them in. I ended up having to go back in and rotate the drill to get a little bit more wiggle room for them.

I was concerned about them inhibiting the ability of the table to fold and wanted them to be easily removable in case I needed to store my table. However, after installing the table was able to perfectly fold up without the new cupholders interfering!

Once this was done, I re-installed the stability wire and hinges on the table. 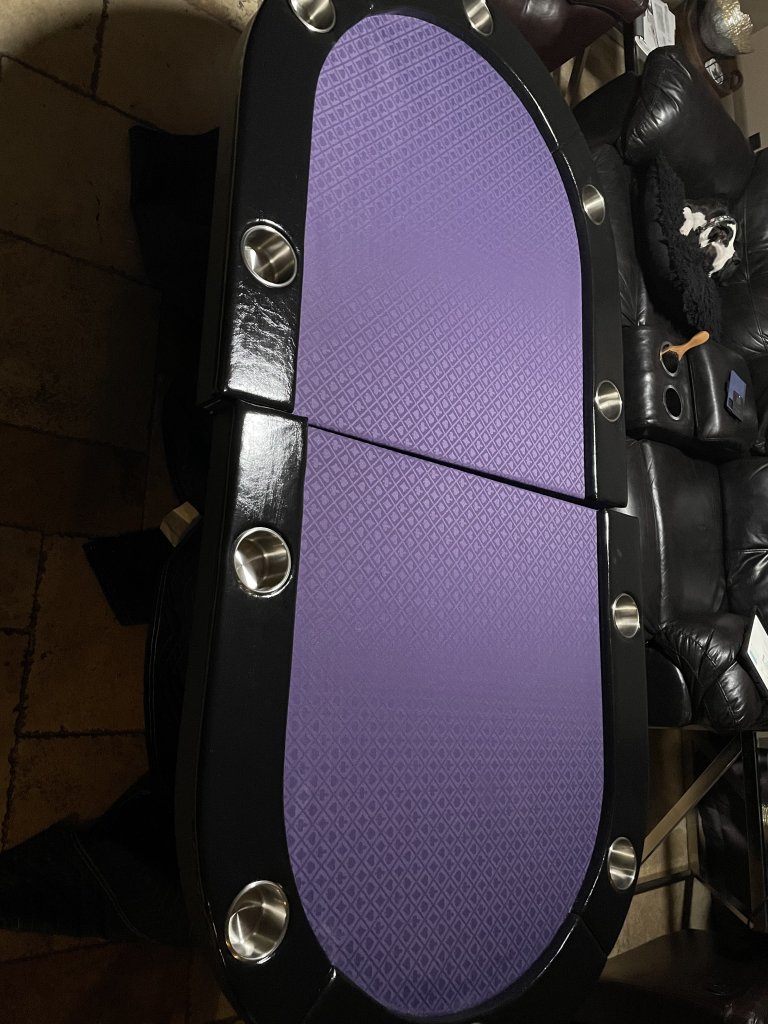 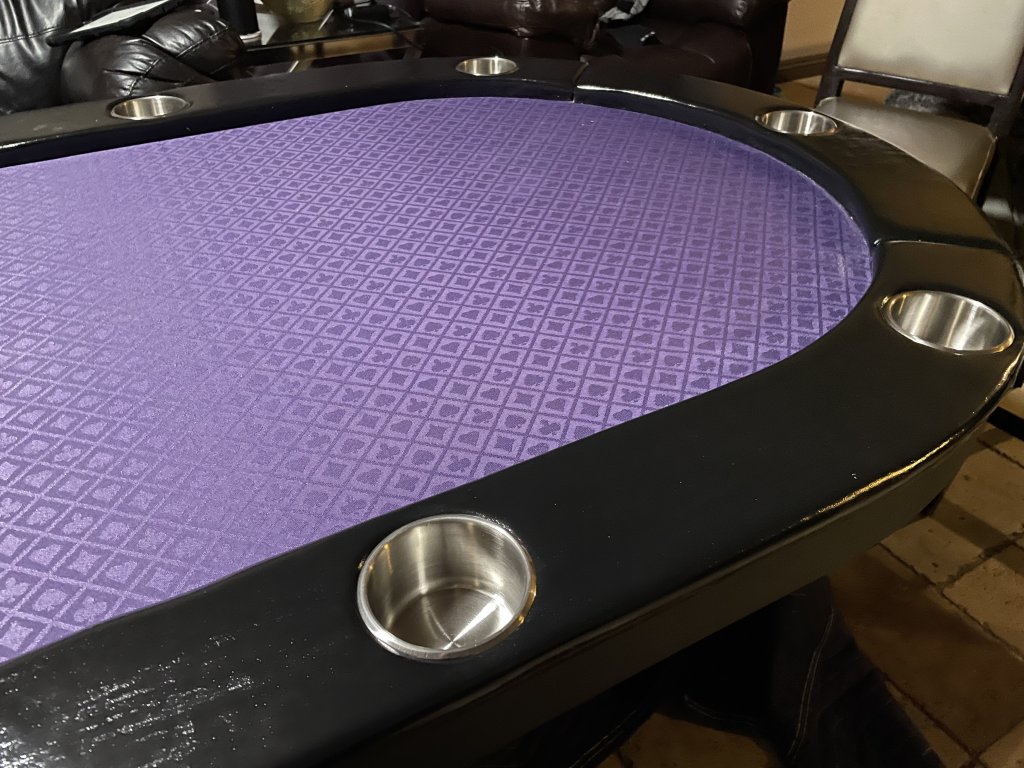 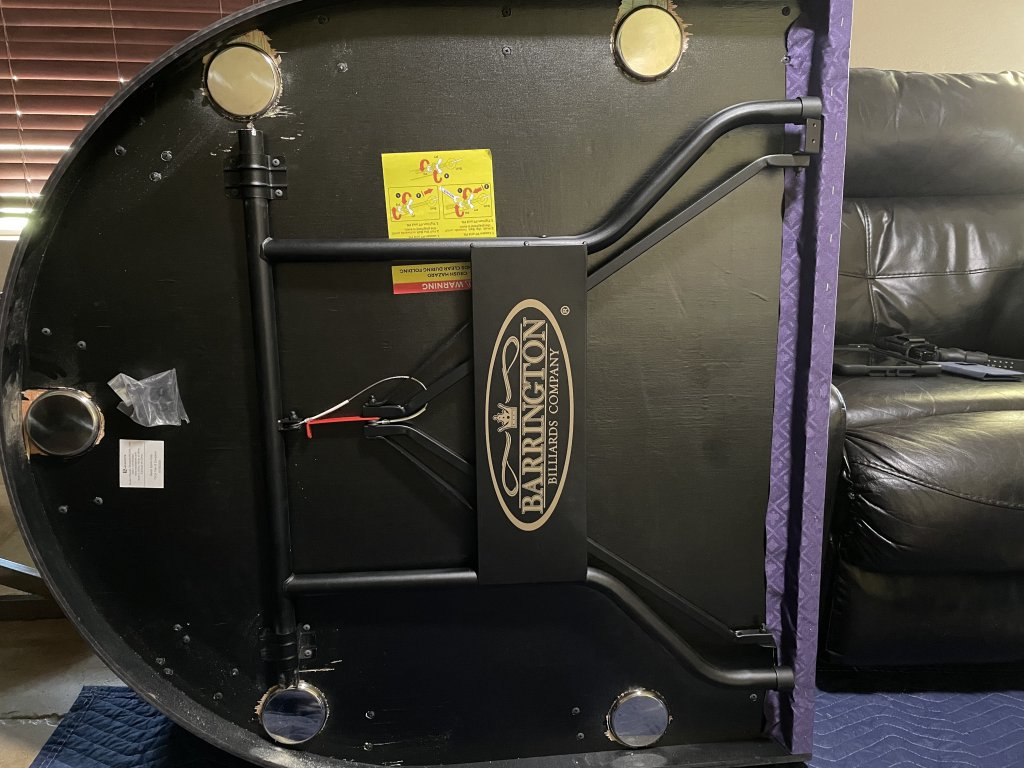 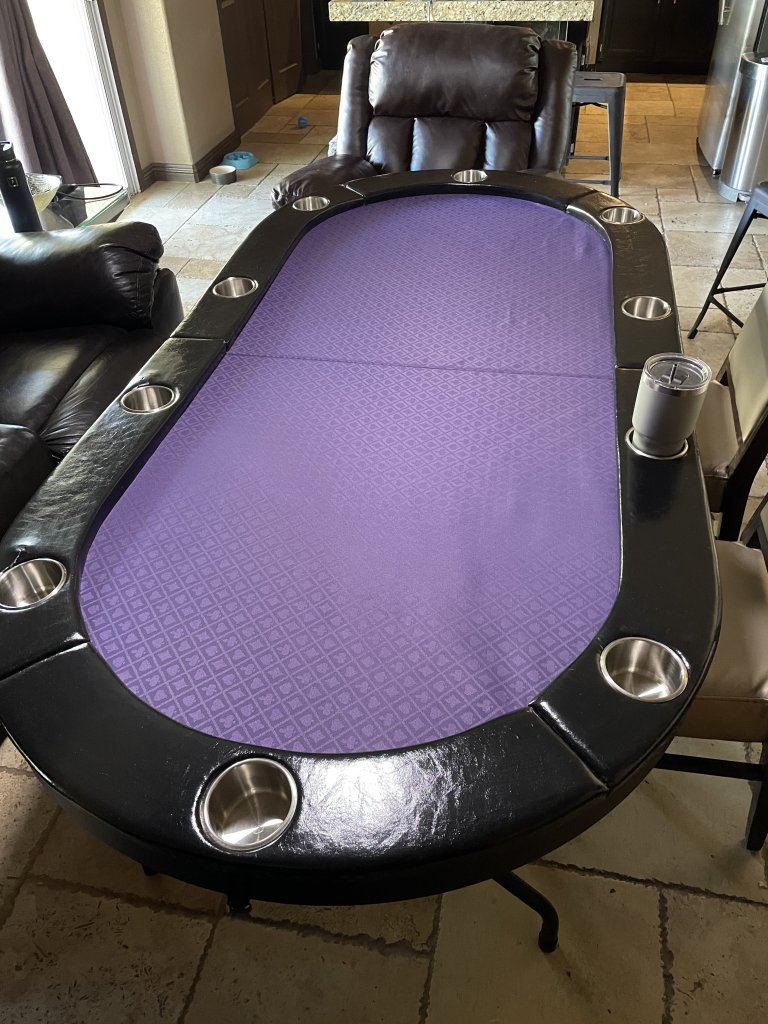 There are definitely some imperfections in the cloth installation but I can always remove the rails and adjust if need be. However, that's enough work for me. I am very happy with out this turned out. It looks really good! The speed cloth is a nice upgrade and my Yeti can now fit at the table!!

If you have any questions please let me know!

Nice write up. Thanks for sharing.

@xovsop im thinking of upgrading the cup holders also to 3.5”….BUT…..

Are you having any issues with the new diameter holes being so much wider that it comes so close to the edge that it jeopardizes the structural strength and if a person were to lean on it could “snap”
Click to expand...

Nope I have not had any issues. It's been pretty good mostly because the table is relatively thick. However, you bring up a good point, I would be careful about drilling too close to the edge. As long as you have an edge there you should be good.

Great write up! You know they do make smaller yeti tumblers. Hahaha

S
Oblong Octogon table. Anyone build one or have advice?

Anyone own a Riverboat Gaming folding table topper?