other than blackjack, is there any reason to have a couple racks of 2.50's? Or should I dump most of them and keep maybe 50-60 (or even less)?

should I be happy using the green $25 chips for quarters (I am building up my 50 cent chips now), or should I re-decal similar style/mold chips (now that I know what they are from another thread) and make dedicated quarters?

I have re-decaled $10 chips (30 of them)..... my thought is using them for both $10 and 10 cents however...... are 10 cent chips even needed for cash games? I see quite a few people with dime chips, but is there an advantage of having them (like do 10 cent / 25 cent blinds)? I was thinking about re-decaling more to get maybe 100 total chips of that denomination.

I also have a question on the # of chips I have, but I'll put that in a different thread

Regarding using $25 chips as quarters is that it can be done but I wouldn't be crazy about doing it. The association between green and $25 is just too strong for me to remember that they're quarters. I've also had a problem playing in a game with green $20's and fumbled a number of bets.

Don't know of anybody who uses T250 chips.

Snappers ($2.50) are also useful for a $5 NL game - as the small blind. Otherwise, the common alternative is the $2/$5 game - and man people prefer to have a lot of singles in play, rather than 1/5 that amount in fives.

I don't personally mind a green 25 in play as a quarter, if the game also includes a yellow 20 as the value denom, or if there are so many fives or tens for the given game that the 25 will never be mistaken for a value denom.

"Need" is always a strong word. There are many here who would argue that we "need" any excuse to get more chips.

Roulette chips are great buy and you can use them for anything, just FYI

As to the number needed, the Tropicana AC bought 9,000 additional snappers this year just to keep our three tables going. You'd think Bergs and Guinness had been expected to show up... :

Some interesting poop on Wikipedia -- the bit in the US actually pre-dates the quarter:

"In the United States, the bit is equal to one eighth of a dollar or 121⁄2 cents. In the U.S., the "bit" as a designation for money dates from the colonial period, when the most common unit of currency used was the Spanish dollar, also known as "piece of eight", which was worth 8 Spanish silverreales. One eighth of a dollar or one silver real was one "bit".

With the adoption of the decimal U.S. currency in 1794, there was no a longer a U.S. coin worth 1⁄8of a dollar but "two bits" remained in the language with the meaning of one quarter dollar, "four bits" half dollar, etc. Because there was no one-bit coin, a dime (10¢) was sometimes called a short bit and 15¢ a long bit. (The picayune, which was originally 1⁄2 real or 1⁄2 bit (61⁄4¢), was similarly transferred to the US 5¢-piece.)

In addition, Spanish coinage, like other foreign coins, continued to be widely used[1] and allowed as legal tender by Chapter XXII of the Act of April 10, 1806[2] until the Coinage Act of 1857discontinued the practice."

So someday we should hold a picayune/short bit game.

pltrgyst said:
but "two bits" remained in the language with the meaning of one quarter dollar
Click to expand...

Both gold and silver coins were, at times, chopped into halves, quarters, and bits: 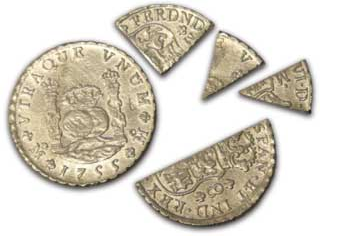 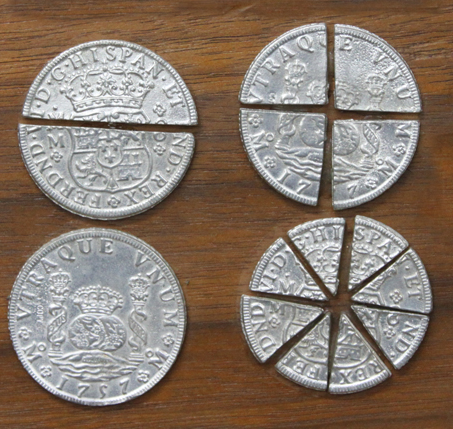 pltrgyst said:
As to the number needed, the Tropicana AC bought 9,000 additional snappers this year just to keep our three tables going. You'd think Bergs and Guinness had been expected to show up... :
Click to expand...

Also, snappers are one of the most frequently "kept" chips, as souvenirs. A dollar is cheap, but $5 gets to be real money - and you get a snapper when you hit a blackjack. Makes a perfect souvenir.

The Trump Plaza long ago replaced their Paulson snappers with Chipco snappers, to make more of a profit on the souvenirs. It was the only ceramic chip in the rack.

I have an old Trump Plaza 2.50 ..... got one and a pair of $1 chips for my collection. I have quite a few 2.50's from Atlantic CIty, the Indian reservation Casino's, and the Carribean casinos (none from Vegas though)

MaxB said:
I have an old Trump Plaza 2.50 ..... got one and a pair of $1 chips for my collection. I have quite a few 2.50's from Atlantic CIty, the Indian reservation Casino's, and the Carribean casinos (none from Vegas though)
Click to expand...

Is your Trump Plaza snapper a Paulson, or a ceramic?

ceramic... same with the $1's
You must log in or register to reply here.

Which sets have 10 cent chips?